The Job I Wanted 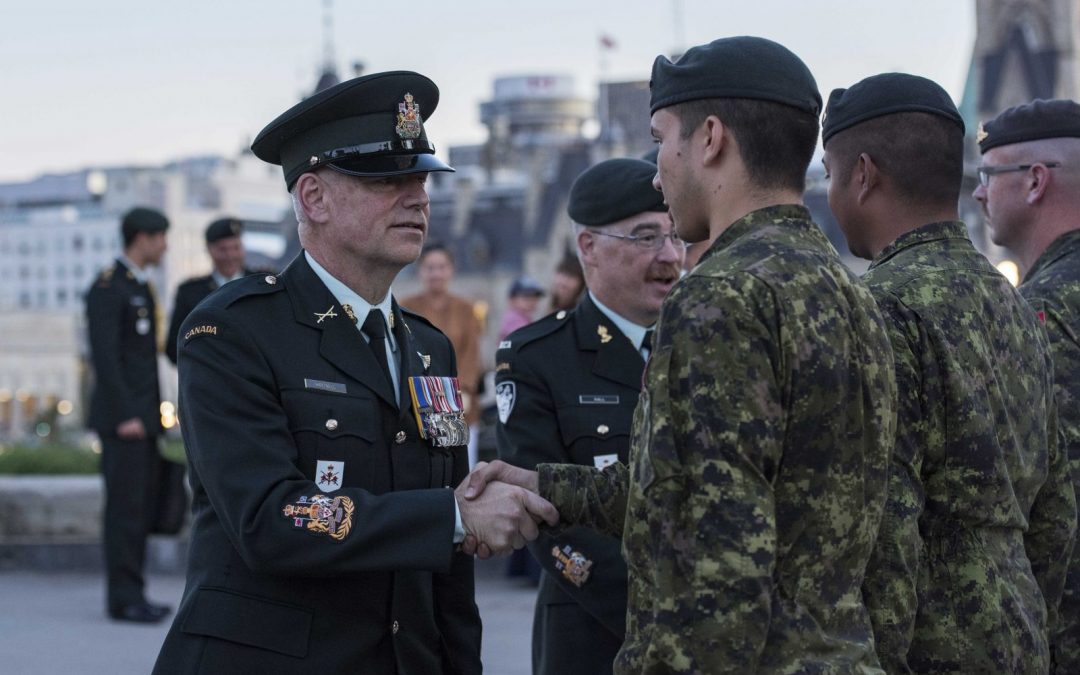 When Lieutenant-General Wayne Eyre officially took command of the Canadian Army on Aug. 20 at a ceremony on Parliament Hill under a cloudless summer sky, he was taking over from Lieutenant-General Jean-Marc Lanthier, newly-promoted to Vice-Chief of the Defence Staff (VCDS).

The ceremony wasn’t quite as routine as these things normally are. Only two months earlier, Eyre had been rotated home from South Korea, where he had been deputy commander of the United Nations mission, to become Chief of Military Personnel for the Canadian Armed Forces (CAF) overall. His abrupt career shift flowed from the government’s decision to install Lanthier as VCDS.

As Eyre met briefly with news media on the Hill, standing slightly to the side was Chief Warrant Officer Stu Hartnell, whose position effectively makes him a link between the ranks.

Hartnell was appointed in June 2018 when Lieutenant-General Paul Wynnyk was still head of the Army and less than a month before Lanthier was installed. That process has made Hartnell somewhat unique in that when he retires, he’ll have served three Army commanders.

His foremost priority is to smooth Eyre’s move into Lanthier’s boots while also regularly interacting with Division Sergeant Majors, the Chief Warrant Officers for each Division, usually in concert with their own subordinates.

“To be a good succession planner, you have to know the people you’re talking about and the files that cross your desk,” he explained to Canadian Army Today. “It’s super important for anyone at this level.” 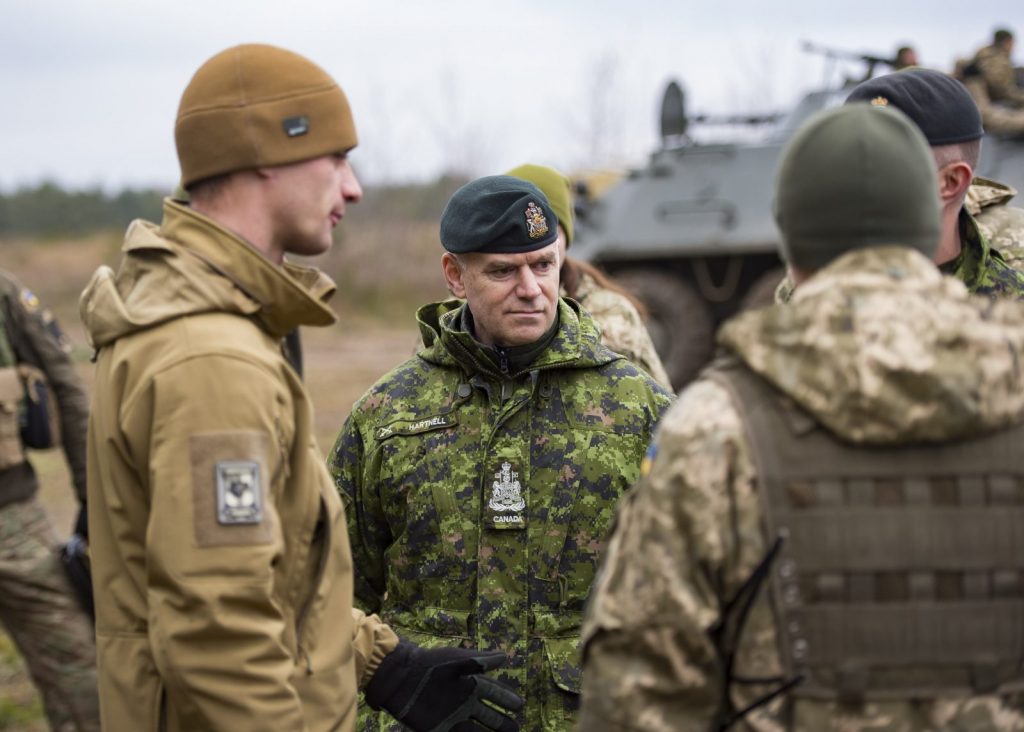 The decorated career soldier brings a wealth of experience to his role, but that experience actually predated him putting on a uniform. Hartnell grew up “like a military brat” in that he moved every few years as his father worked on civil dam projects in Northern Ontario before the family settled in Midland.

Unlike many others in the CAF, Hartnell didn’t start out looking for a military career after high school. But he had grown up with the stories of an uncle who was Regimental Sergeant Major of the Queen’s Own Rifles in the Normandy invasion of June 1944. “There was a desire to be part of this, to prove myself, all those kinds of things. When I joined in ’85, I thought ‘Canada’s never going to war’ and, lo and behold, we’ve been to war several times.”

So, three days after enrolling at 21, he was shipped to Canadian Forces Base (CFB) Petawawa for 26 weeks of training before being posted to the 1st Battalion, Royal Canadian Regiment (RCR) in London. Five years later, including an operational tour in Cyprus, he was back at Petawawa for RCR battle school. His subsequent career had him assigned to the Canadian Airborne Regiment 3 Commando and deployed to Rwanda during the genocide.

When the Airborne was disbanded, there were “smaller postings” as the Army considered its options. More training followed at CFB Gagetown, where Hartnell ran the Master Sniper cell for three years before being posted to the 2 RCR in Meaford as Sergeant Major for Skills Company at the Land Force Training Centre.

Then it was 3 RCR in Petawawa as Sergeant Major of the Parachute Company and Combat Support Company, after which he was head-hunted to be the first member of the Special Operations Regiment. That was followed by assignments as Chief Warrant Officer in SOFCOM, Regimental Sergeant Major of Battle Group Task Force 110, and Group Sergeant Major of 2 Canadian Mechanized Brigade Group.

After French-language training, he was selected as 4th Canadian Division Sergeant Major for three years in Toronto, priming him to be interviewed to become the Canadian Army Sergeant Major.

Not quite. It’s far from over, given that Hartnell won’t likely retire until sometime in 2021. Even so, “by the time three years is done, you should be exhausted,” he said. “In my experience, if you try to go any further, then you stop doing the things that were important to you when you started. Two years usually doesn’t give you enough time to influence and see through the things you tried to influence.”

Asked about his own priorities, Hartnell said his reply would be incomplete at best because senior NCOs need to be “leadership chameleons” as that link between the ranks. “You have to see where your commander likes to concentrate his efforts, and if there’s any bits that are missing, that’s where you step in. You work on those to make the team better.”

“Ultimately, I’ve been concentrating on two things,” he said. “The first is ensuring we maintain operational excellence. Next is individual and institutional change. Individuals like change when it’s beneficial, when they get a raise, that sort of thing, but even in the Army, people are sometimes creatures of habit and skeptical of change.”

The Army is “a learning and adaptive organization” that changes all the time, he said. “My message to our soldiers and NCOs is, ‘acknowledge that this is inevitable throughout your career and you need to be prepared and accept it’.” 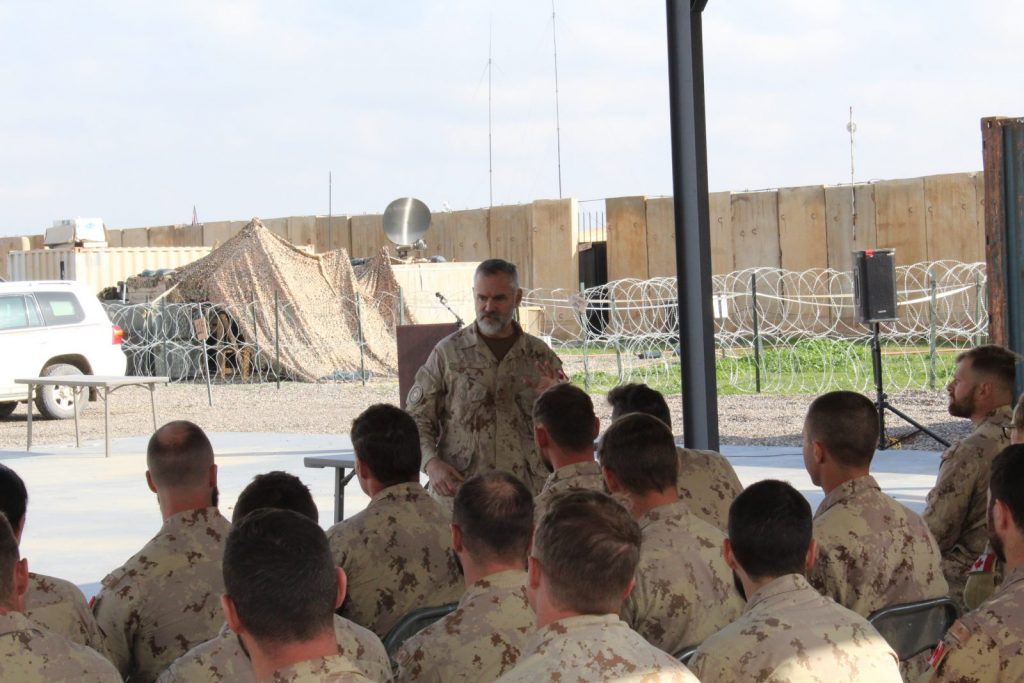 With adjacent offices, Hartnell and the Army commander are in constant touch. The predominant topic of discussion is personnel, specifically recruitment and retention, and the challenges of dealing with different expectations of military service as careers progress.

“During our years in Afghanistan, the recruiting centres were full. It was the biggest thing happening in these young people’s lives at the time, but once they’d done ‘the war thing’, they got out,” he observed. “A percentage of whom stayed in are now our mid-range leaders whose experience is invaluable in how we advance.”

However, many soldiers now want more balance in their life and greater flexibility in their careers, a challenge to Army tradition that will require significant steps to change.

“They want to go on operations non-stop because that’s why they joined. But then they get married and have kids, and want time at home more. Our system is not set up like that and we’re trying to address it,” he explained.

Among other things, it would require amendments to the National Defence Act (NDA), not something done lightly or often, which is why the CAF has a team working on the Journey project, aiming to modernize support for personnel and their families all the way through to retirement. Often asked about it, Hartnell points out that the NDA reflects some 70 years of policies. “We’ve got to peel those back and figure out which ones need to be changed to get to where we want to be.”

Hartnell’s other frequent conversation with troops is over equipment. Rapid technological change and the evolution of threats drives some of these discussions, but more often it’s the pace of the acquisition process.

“One of the biggest complaints I get from soldiers is that we don’t procure quickly enough,” he said.

The Army currently is managing 25 capital projects budgeted at $19 billion, but some of those such as clothing and soldier equipment, utility trucks or common heave equipment are CAF-wide and can involve the Air Force, Navy and Special Forces. “Every element has a say in the whole process and if something’s divergent from their requirement, they have to identify that,” he noted.

As the Army adapts its force structure to changing threats and adjusts policies to changes in society, Hartnell will be that critical link between the commander and the troops. After more than 30 years of service, Army Sergeant Major is the “the job I wanted,” he said. Asked whether NCO for the CAF lies in his future, he politely demurred. “I’ve had a privileged career…we’ll see where it goes, but I plan to give it my all until 2021.”