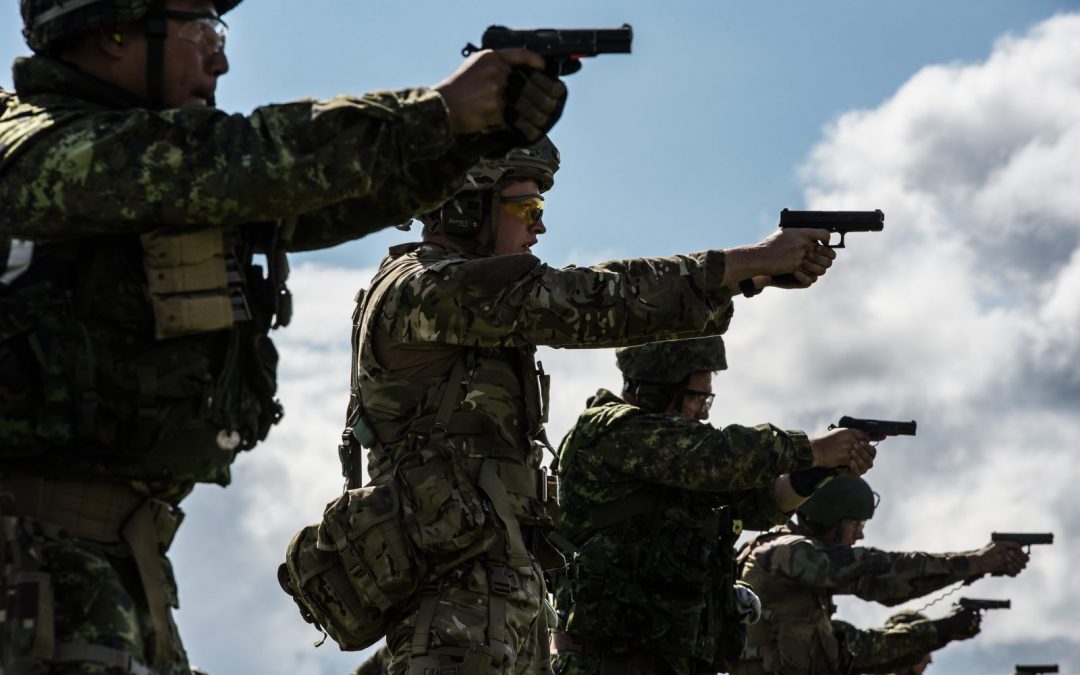 The nine-millimetre Browning semi-automatic pistol used by the Canadian Armed Forces is a technically impressive weapon. It was conceived by American John Browning for Belgium’s Fabrique National in 1911, and has been used by more than 50 militaries over the decades as it was continually refined. But a replacement is desperately required, according to the Canadian Army’s General Service Pistol Replacement project director.

Production of the Browning, which began in 1935, finally ended in 2017, and parts for in-service weapons are no longer available. Repairs to in-service weapons mean that Colt Canada, the government’s Strategic Source and Centre of Excellence for Small Arms, must cannibalize others. Some 30 percent of each batch is scrapped and stripped of serviceable parts. Hence the Army’s need for a sidearm better suited to personal protection when the service rifle is not adequate or available in constrained close-quarter situations in increasingly urban theatres of operation.

A General Service Pistol (GSP) replacement project is now in the hands of Major Carl Gendron, a member of the Royal 22e Regiment. His formal title is project director for the Director of Land Requirements 5-1 (Infantry Weapons).

Gendron brought operational chops to the job. Having joined the Reserves in 1985, he went Regular Force in 1990 and was deployed immediately after training to support the “Oka crisis” in Quebec. The Royal 22nd were key to a peaceful resolution after a tense stand-off. He also deployed to Bosnia, Egypt, Afghanistan and, finally, the Republic of the Congo in 2012.

Asked whether he had ever used his Browning on deployment, he initially replied with a drawn-out “noooo,” obviously thinking about how “used” should be defined. He then explained that during his time doing liaison work with the NATO-led International Security Assistance Force in Afghanistan, “There were a few times when I had it unholstered because you just didn’t know how the situation would develop.” 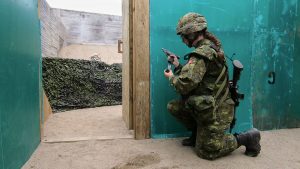 Some might say it was just as well he didn’t have to fire his Browning because no matter how well maintained, they are seriously problematic. “The bottom line is that we don’t have a sufficiently reliable General Service Pistol,” Gendron acknowledged. Troops who are deployed, but part of a formed unit, usually are issued a pistol in-theatre from the operation’s stock of spares.

“A unit entitlement will dictate the number of pistols and positions they are assigned to,” he said. “In operational units, officers and senior NCOs (non-commissioned officers) are usually the recipients of pistols, although a commander could have them issued to others depending on his assessment of the situation.”

Just how unreliable is the Browning? Evidently the only recent solid data comes from a Canadian team at an international competition. During the 2017 Armed Forces Skill at Arms at the Robinson Maneuver Training Center in North Little Rock, Arkansas, only five of 20 Brownings taken to the event by the CAF’s best shooters were used due to an unacceptable number of stoppages. The other 15 were withdrawn during warmup.

Canada’s 10-member team had an average of 4.5 stoppages each while firing a total of 2,810 rounds. As a comparison, the 20-member British team had absolutely no stoppages while firing 5,620 rounds. Against a generally-accepted mean of 5,000 rounds between stoppages for new service pistols, the CAF experienced a much higher percentage above normal.

Before a deployment with the potential for combat, weapons technicians run the pistols through a series of checks to determine whether an overhaul is needed. Even if it is, with the aforementioned cannibalization, “you’re not getting a new pistol; in the end, you’re getting one that inevitably fails early,” Gendron noted.

There’s no gainsaying the fact that the federal government has repeatedly said the CAF must be suitably equipped for a broad range of missions. Both the current government’s defence policy, Strong, Secure, Engaged, and the previous government’s Canada First Defence Strategy made commitments for “fully funded” and “predictable funding” for combat-ready capability, though neither specifically mentioned the well-known need for new pistols.

The Army’s capstone document for guiding future land force generation and employment, Close Engagement: Land Power in an Age of Uncertainty, concedes that modern operations “inherently entail an increased element of risk” for troops on the ground. “Even with a fully capable sensor grid, an adversary can achieve surprise and engage dispersed forces with superior numbers. Smaller force elements therefore need an enhanced ability to defend themselves and neutralize adversaries while awaiting reinforcement.”

Gendron acknowledged that part of the problem is that projects can be caught up on the CAF’s posting cycle, which is typically two to three years, so new leadership seems to start from scratch. “Yes, there’s a lot of paperwork involved and it has to carry through several posting seasons.”

The concept of involving political oversight (or political interest) in a relatively small defence procurement wouldn’t be unprecedented. When former Prime Minister Stephen Harper took a personal interest in replacing the Canadian Rangers’ decades-old Lee-Enfield rifles in August 2014, the procurement suddenly lurched into high gear. The result was that by April 2018 the Rangers had the new Colt Canada C-19 .308s, produced under licence from its Finnish developer, SAKO, part of Beretta Holding S.p.A. in Italy.

While the Canadian Army has the GSP program for replacing its Brownings in all Commands, this is on pause for now because funding hasn’t been approved. So Gendron is managing an Army Interim Pistol (AIP) project which is expected to sustain Army capability for up to 10 years, until the GSP project can plug the entire capability gap resulting from the Brownings’ withdrawal.

With an approved budget of just under $5 million, taxes included, the AIP project ostensibly mandates the purchase of 4,738 sidearms, including 508 for depot retention, all deemed “critical to meet the operational capability requirement of Regular Force units.” But SSE also highlights support for the Reserves, which would boost the overall buy to 7,627 once 2,580 are added for the Reserves and 309 for depot inventory. This, however, represents only about half of the pistols currently allocated to the entire CAF.

Current defence policy means that the CAF must be ready to have 6,500-7,000 personnel simultaneously deployed on operations with another 5,000-6,000 in pre-deployment. The majority of deployed personnel are usually Army and critical equipment must be on-hand before engaging in their pre-deployment training. 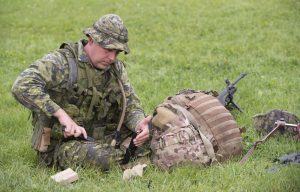 The new pistols must be “capable of continuous operation with minimum breakdown, damage, or maintenance” under all expected climatic conditions and “through the full spectrum of conflict in a wide range of environments and terrain such as jungle, mountains, and forests, deserts and, especially, urban areas.”

The AIP Statement of Operational Requirements was signed off in April 2018. An underlying business case analysis points out that pistols “can be used by any Canadian Army soldier to enhance close combat protection and to increase the probability of survival in a defensive situation.” Accordingly, it recommends that AIP procurement should begin an open competitive and lowest cost compliant strategy using “the limited budget available within the minor capital funding process.”

A request for proposals (RFP) had been expected in September, but progress is slow on what many in the CAF consider a critical and long-overdue acquisition. Although the Army has already approved the funding and requirement, “everybody else has to agree that this is going to happen,” said Gendron.

Which pistol will it be? Other than the fact it will fire NATO-standard 9mm ammunition, it’s anyone’s guess for now. There are several potential contenders, including pistols from major manufacturers such as Beretta, Glock, Heckler & Koch, Sig Sauer and Smith & Wesson, just to name a few.

One requirement for the new weapon is that it fit 95 percent of CAF users. The advent of polymer structures means that the eventual supplier would provide three grip sizes.

There have been suggestions that the Sig Sauer P320, variants of which were chosen by the U.S. Army in 2017 as a replacement for the Beretta M9s it introduced in 1986, could be an option for Canada. Gendron admitted that “we’re watching this because it has most of the technology we’re looking for,” but he insisted there is no formal preferences and other pistols have potential to meet the requirements.

The 1.1-kilogram sidearm pistol, which has an effective 25-metre range, consists of a barrel, a slide, a breech block, a frame, and a 13-round magazine. The latter’s capacity, nearly twice that of contemporary American and German designs, is why it’s often called the “Browning High Power” even in non-anglophone circles, including within its manufacturer, Fabrique National.

A weakness, if it can be called that, of the Browning is that it’s a single-action. Unlike modern double-action semi-automatics, its trigger is not connected to the hammer. If a double-action pistol is carried with the hammer down, a loaded magazine and a round in the chamber, all it takes to fire is a pull on the trigger or a pull-back on the hammer and then a trigger-pull. Single-action pistols can only be fired when the hammer is cocked. Accordingly, the Browning is typically carried with the hammer cocked, a round in the chamber and the safety catch on; this is called “cocked and locked” by the United States Army or “made ready” by the British.

The Browning’s hammer is in itself problematic, often “biting the shooter” by cutting into the web between thumb and forefinger. It was designed at a time when society (and the military) looked askance at “lefties.” Gendron, who is left-handed, “learned to shoot with my right . . . because you just have to adapt.”

Its ambidextrous safety is another problem, even for right-handed shooters who have a high grip. The bulbous end of the safety can wear into knuckles. And, finally, the “iron” sights on the Browning remain unadjustable, never having never been upgraded as other manufacturers have moved on technologically.