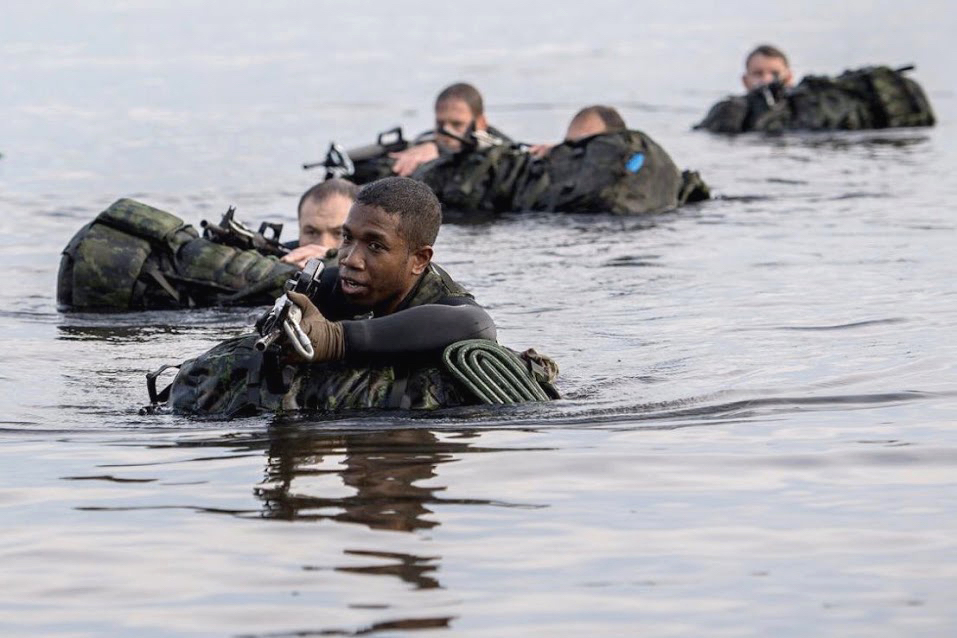 The Patrol Pathfinder (PPF) is a legendary course run by the Canadian Army Advanced Warfare Centre, where mythical bush creatures crawl out from underground and attend as candidates. Those who pass would be reclaimed as commando gods at their home units. This was the mindset I had when I first heard about the Patrol Pathfinder Course.

I did my research and found a Truth Duty Valour episode on YouTube, and instantly I was hooked on the pathfinder’s history and the challenges of the course; needless to say, I also admired the badge: a winged torch.

As I scrolled through different articles, I discovered many that said that it would be impossible for a Reservist to attend and actually pass; the two most prominent reasons being obtaining the prerequisites required for PPF as well as accruing the required time in the Canadian Forces. However, years later I found myself rapidly ticking off those prerequisites and collecting relevant experience by going on my Basic Reconnaissance Course and patrol competitions such as the Canadian patrol concentration in CFB Wainwright.

At last, in 2018, I was given my first opportunity to attend the course. Unfortunately, I didn’t make it far due to a condition I suffered during a ruck march called rhabdomyolysis, a condition whereby your body is overworked to the point where your muscle starts to eat itself for energy, which can cause kidney damage. This also put me in the hospital for a couple of days and eventually I was ‘return to unit’ with a ‘breathe only’ chit.

Fortunately, I had made a great impression on the staff before exiting the course, and all remembered me as that guy who “thundered in just 200 metres from the end.” I was given the okay to come back on the next course, which also gave me a year to train and focus on when that rhabdomyolysis comes back around.

During my year of prep, I accumulated over 150 kilometres of rucking and was able to attend pre-pathfinder training with the 3rd Battalion, Royal Canadian Regiment (3 RCR). From there I arrived back on course in mid-August 2019.

The PPF course is about three months long. You practice every insertion and extraction technique available to the Canadian Armed Forces, from the Fast Rope Insertion Extraction System (FRIES) all the way to floating on and off a submarine. You are also required to deliver immersive, clear, and concise orders while coordinating with multiple assets and commanders under stress. One of the perks about this course is that it takes you all over Canada.

Our course of 20 candidates started with a physical fitness evaluation by Personnel Support Programs and the drawing of multiple blood samples by Defence Research and Development Canada scientists as part of the research they were conducting on the candidates. Throughout the three-month-long course, the candidates’ blood was periodically drawn for data collection. 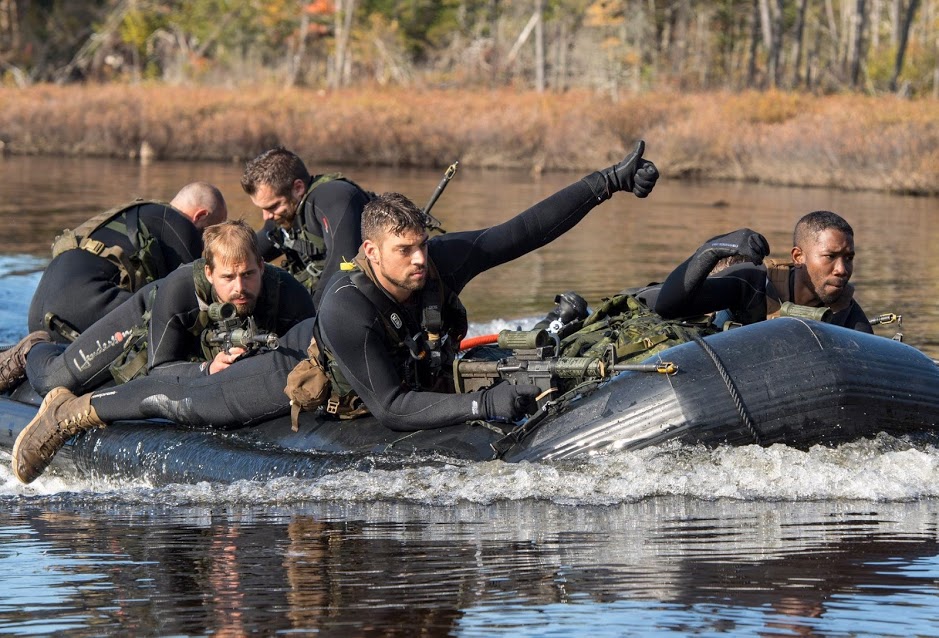 The first week included a 20-kilometre ruck march with about 80 pounds of gear (before water and rations) and had to be completed in under four hours and 30 minutes. Then candidates underwent multiple days of navigation practice, water drills, and skills assessments. Only seven passed the navigation test on the first go. Unfortunately, those who didn’t pass had to retry again, with some having to do the test multiple times consecutively. Due to the environment and injury rate, by the end of that gruelling week only 13 were left on the course.

Candidates then commenced a week of theory classes and orders before returning to the field to conduct standard operating procedure (SOP) training, watermanship, and PPF operations. This is where we learned the majority of how to operate as a pathfinder. To my surprise, we actually called in real jumps and beachheads that week. Unfortunately, two more candidates were injured, leaving only 11.

Before going on the course, I began working on strengthening my mental resilience and attained a different mindset after reading the book, Can’t Hurt Me: Master Your Mind and Defy the Odds, by David Goggins, an ultra-marathon runner and former U.S. Navy Seal. He mentioned that during his hell week he would set small goals and keep his optimism up. Thinking like this helped me get through the increasingly tough times, and also had the side effect of raising the morale of those around me. It seemed like whatever obstacles or challenges came our way, we would simply say, “Roger that,” and continue on. As a result, we created a solid team that helped each other through hard times, which is essential for a course of this nature.

However, there were many times where you had to push through on your own. The ability to understand that the pain and exhaustion were amplified in my mind and that my body can overcome, is what kept me going. Finding ways to claim a bit of your normal lifestyle helped, too. I found my norm with a bag of gummy worms that my girlfriend gave me. Those reminded me of the times when I crave them during long road trips, and that I could never leave a gas station without purchasing a bag. That humanized my mental state.

Training continued with a very well-orchestrated SERE (Survival, Evasion, Resistance, and Escape) course. We then had a full weekend to recover before we were off to Vancouver Island for 10 days to conduct the water phase of the course. From there we worked with Fleet Diving Unit (FDU), Naval Tactical Operations Group (NTOG), 406 Squadron (and their new CH-148 Cyclones), and a Royal Canadian Navy unit at CFB Esquimalt. We also got a tour of a frigate ship and a submarine. During our time there, we boarded an Orca-class patrol ship and based our missions in the Pacific Ocean, returning to the ship once finished.

After we got back to Ontario, we had a couple of days off before moving to Quebec for the last three weeks of the course. On our drive to Quebec we stopped in Petawawa to train with 427 Squadron to conduct FRIES training.

From there, the last two weeks were spent in and around the Quebec City area, conducting missions both in wooded areas and urban settings, which greatly challenged our thinking dynamics.

Unfortunately, it wasn’t a clean finish towards the end of my course. I was sent to a progress review board (PRB) after failing my last assessment and I was force-rested for 24 hours — of which I probably slept 22 of them. I was given one last chance to pass as a result of the PRB. Thankfully, a day later, after completing my final mission on the Le Massif ski hill in Charlevoix, I was debriefed and sustained an effective score on the aforementioned assessment, thus successfully completing PPF. This brought a wave of different emotions through me — after all, I was one of less than five Reservists to have ever passed this course. 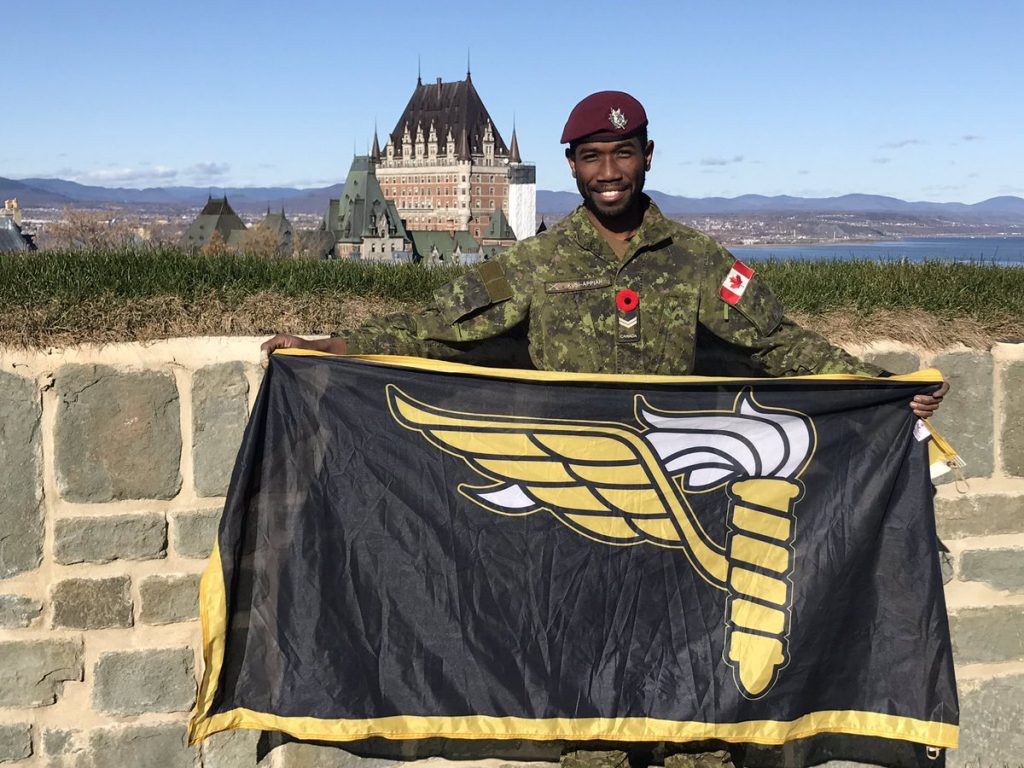 In the end, nine candidates passed PPF with a victory mission and torch ceremony conducted at the Citadel in Quebec City.

This success made it clear that the old stigma of Reservists not being good enough is false, and that I have opened the possibility of challenging PPF in the thoughts of potential candidates back at my home unit. One of my ultimate goals from this experience is to hopefully have left the sentiment in the minds of others that, “If Cpl Kusi — the guy who forgot his T-shirt on his first parade night — can do it, so can I.”

Nothing is gained without great labour.

This article was originally published in the 2020 edition of The Rifleman, a publication of The Queen’s Own Rifles of Canada. 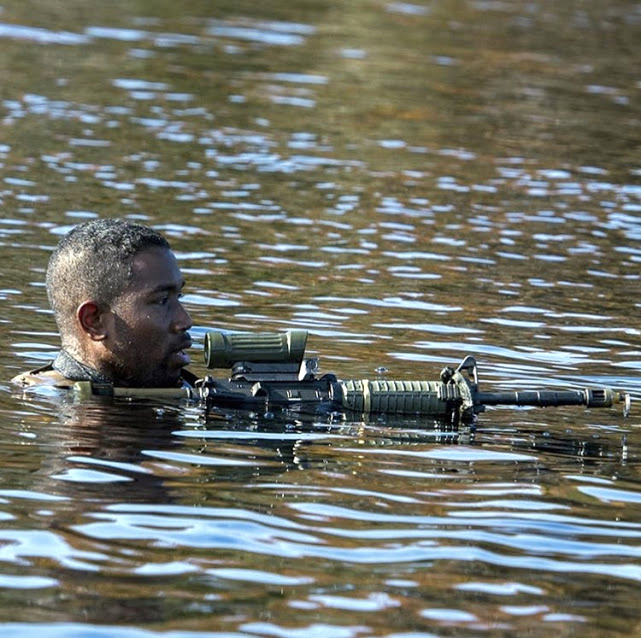