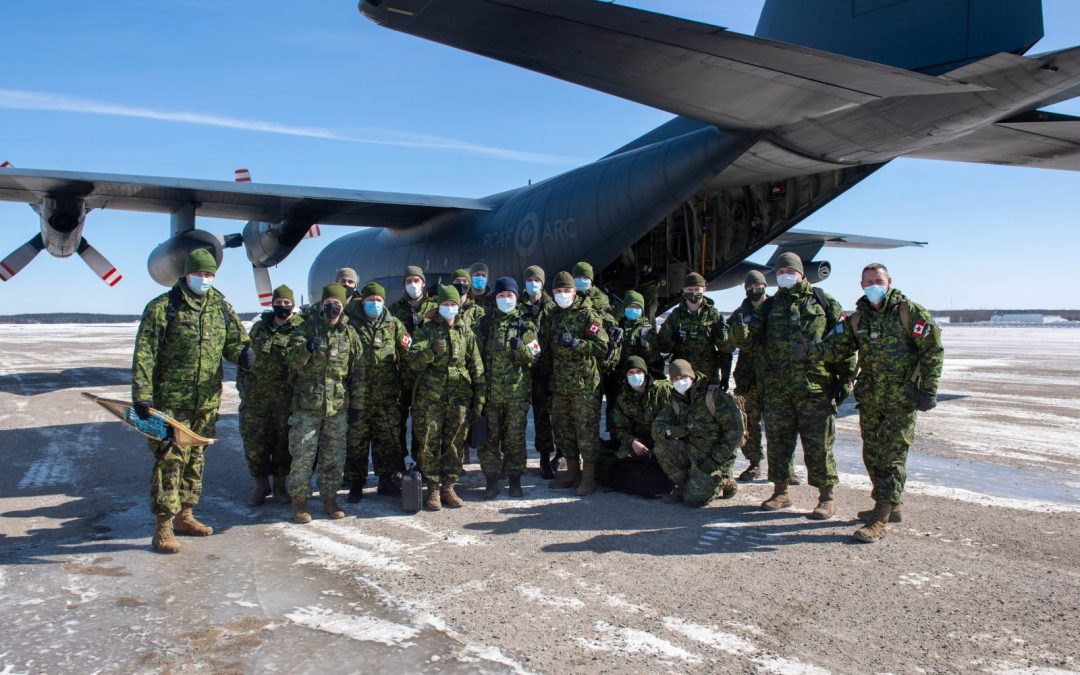 Canada’s road to immunization has been a bumpy one, with delays in the initial procurement of vaccines and other distribution problems. In recent months, the immunization plan has been on a better track, with the vaccines – about a million doses a week – showing up where they are needed and the most vulnerable populations receiving priority protection in a timely fashion.

That the various vaccines are arriving in a timelier manner and in the quantities required is in no small part thanks to Major-General Dany Fortin and his team of about 50 Canadian Armed Forces (CAF) members, many drawn from the Canadian Army, who have been working with the Public Health Agency of Canada (PHAC) to ensure that, when those vaccines land in country, they end up where they can be injected into the arms of waiting Canadians.

The Army’s involvement in this process is not surprising. At heart, the distribution of the various vaccines is a logistical problem of the kind that militaries excel at: something essential for an operation has to be sourced and moved from A to B according to some larger plan. This holds true whether it be ammunition for a combat deployment or shelters and building materials after a natural disaster.

That said, an outsider learning that the Army is involved in distributing vaccines might immediately imagine a hands-on approach: long lines of military trucks trundling along highways or soldiers stacking boxes filled with medicine. In the early days of the pandemic, the CAF was involved in this direct fashion during Operation Globe, which brought home Canadians stranded overseas at the beginning of the pandemic, and Operation Laser, where Reservists were employed to support staff in long-term care homes in Ontario and Quebec. More recently, Canadian Rangers have assisted with the delivery of vaccines in northern Ontario and Manitoba, and CAF members have been active in other isolated parts of Canada.

That’s not the case here. As Fortin points out: “We have trucks and personnel that can complement any [delivery] effort, but we are not optimized for that kind of delivery.” Handling and transporting medicines and vaccines is a highly specialized role, and there are already companies that do it on a regular basis.

“The best way to develop a complex logistics chain in Canada,” pretty much the definition of what has been needed to distribute the COVID-19 vaccines, “is to leverage what industry has to offer,” he said. “There are companies that have experience with pharmaceuticals, that can bring the product into the country, handle it with the proper equipment, freezers and so on, and then distribute it through reliable transporters, who have experience with shipping pharmaceutical products.” 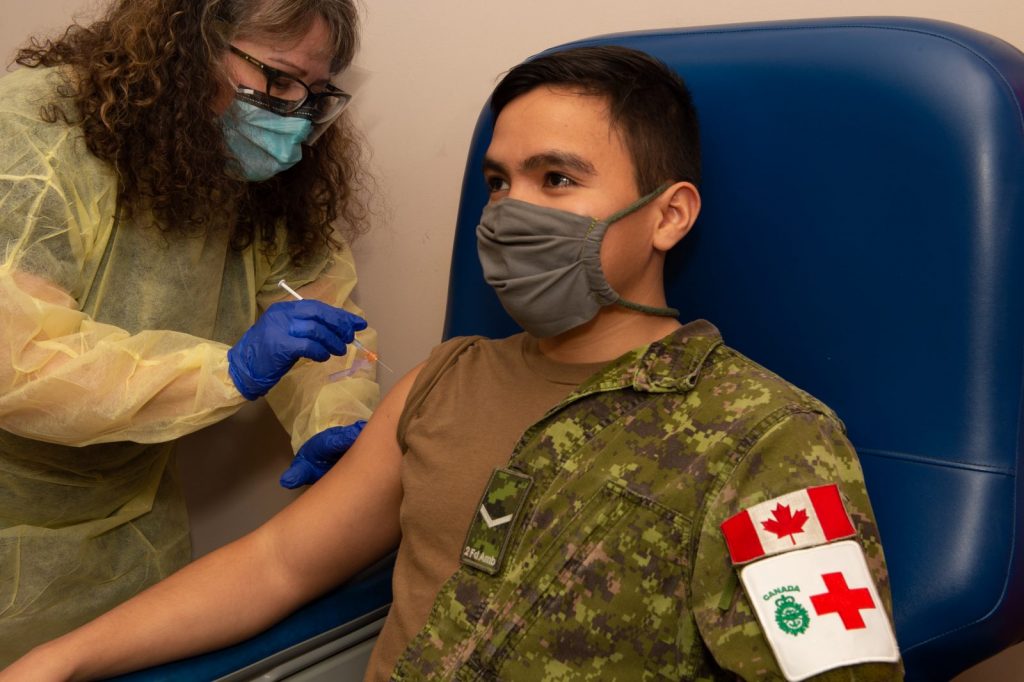 What Fortin and his team – and he is careful always to emphasize that their work is a team effort – brought to PHAC when he was appointment Vice President Logistics and Operations in the fall, was their experience planning intricate operations and what might be called a “logistical” way of approaching problems. As Shannon Proudfoot put it in Maclean’s magazine recently, it’s an approach that says, “Problems aren’t an unwelcome hiccup in the plans, they are the plans.”

“When we started, we identified the need for logistics planners,” said Fortin. “We have a senior logistics officer, a colonel, and a handful of planners working with him.”

A key problem, that word again, was the challenge of moving goods that had to be kept frozen: in the case of the Pfizer vaccine, at an ultra-low temperature of -70 Celsius. “One planner spent long days for the last five months on all things freezers – dry ice, freezer boxes, and so on.”

The first CAF personnel began showing up at PHAC in the summer of 2020, with Fortin himself joining in November. The 50 or so members serving with him now are an eclectic mix. “There’s different trades: logistics, communications, combat arms, some generic planners and occupational people.”

Fortin himself does not have a logistics background. A gunner by training, “the majority of my career was spent in operational units,” he said. He has served as a deputy commander of I Corps on exchange with the United States Army, the commander of the NATO training and capacity-building mission in Iraq, and currently as commander of 1st Canadian Division Headquarters in Kingston, Ont. As he noted, “I have experience working with complex problems,” both in the Army and during a stint in the Privy Council Office. 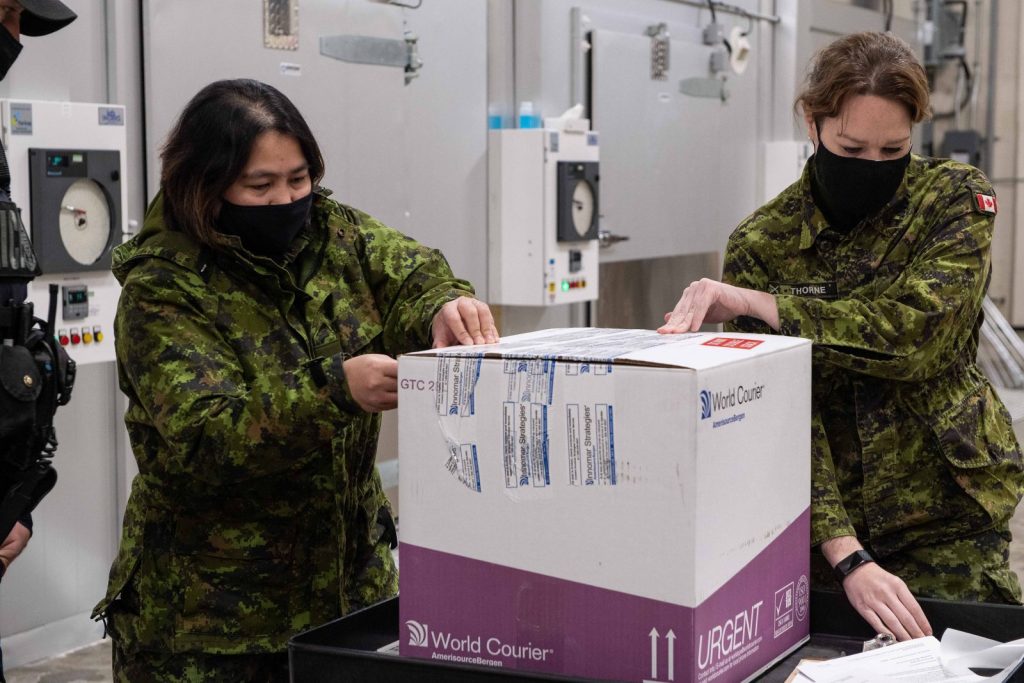 “In the last few weeks,” Fortin explained in late March, “we have really established a distribution system.”

It’s a complex supply chain. “Our main logistics supplier is Fedex-Innomar,” a joint venture run by the courier company and Innomar, a firm specializing in delivering pharmaceutical goods. “They work hand-in-hand to deliver proper storage and handling.”

Pfizer, with their particular refrigeration needs, however, use Purolator. They prefer to deliver directly to where the vaccine is being given out, while Fedex-Innomar and their partners have adopted a more hybrid approach, delivering to both central hubs and points of use. Administering the drug is a provincial responsibility, and each province has its own preference regarding delivery. But they need to know when to expect deliveries. Each week, Fortin and his team oversee millions of doses headed for hundreds of destinations, making sure they reach them in a timely fashion.

The CAF contingent will likely remain in place until early fall. “I think we should plan on providing support to the agency that will continue beyond our tenure here,” Fortin said. “We have to plan for multi-year vaccinations. The military approach is to plan for all sorts of contingencies, so my focus is that there will be another pandemic and there will be another multi-year vaccination campaign of some sort. It may not require as much support from the different agencies and government departments and the CAF. I hope I’m wrong, but we need to have some sort of core capability here.”

What has he learned from his experience? “A couple of things. Myself and my colleagues here will have an appreciation of inter-agency work. You get a very different perspective working with an agency outside the CAF. Very different.

“The other thing I think it will give the team members is a sense of how decisions are made in government and the interactions between the agency and other departments, but also way up to the highest level and back down. We’ve all learned a lot and I hope to be able to return to the Army and teach people how to engage in inter-agency work or support a large operation like this one.”