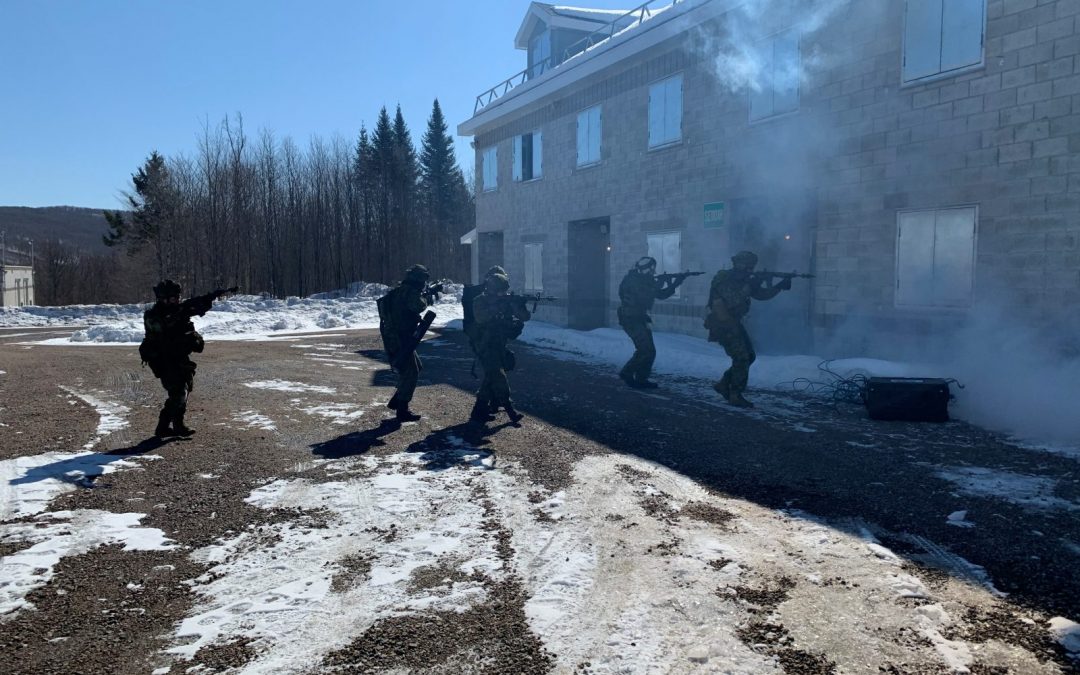 For four days in mid-March, a section of soldiers from Charlie Company, 3rd Battalion, Royal 22e Régiment, navigated through a village in the training area of 2nd Canadian Division Support Base Valcartier, Que., engaging an enemy as the sounds and smells of village life and urban combat swelled and wafted around them.

When urban operations instructors from Charlie Company reviewed the video, comparing the first day “dry” rehearsals to the final day of combat, “it was like night and day,” said Captain Marian Janek. “The soldiers improved so much over that time, the instructors said it was incredible. That was four days of training. They can’t wait to get the whole company in there.”

Janek is the project director for Urban Operations Training System (UOTS), an Army-wide program to instrument training villages at locations in each of its four divisions, from Wainwright in Alberta to Gagetown in New Brunswick. The user trial in Valcartier was the first opportunity for the section of Vandoos to put the new system through its paces and provide Janek with final feedback.

While the pandemic has restricted travel and slowed progress on a number of Army projects over the past year, the UOTS team was able to complete site acceptance of the overall system in the summer of 2020 at 5th Canadian Division Support Base Gagetown with assistance from the Canadian Army Trials and Evaluation Unit. A platoon from the 2nd Battalion, The Royal Canadian Regiment (2 RCR), then conducted the first user trial in September.

Functional testing of the system in Valcartier was completed in January and, as Janek was holding the user trial, UOTS team members from the Directorate of Combat Systems and Equipment Management conducted the functional test in Wainwright. A user trial will follow this summer once Exercise Maple Resolve concludes. A functional test and user trial will also be held at 4th Canadian Division Support Base Petawawa in May and July, respectively, if COVID doesn’t further disrupt the plan.

“The site acceptance test in Gagetown demonstrated that the overall system works,” explained Janek. “With the functional tests, we’re confirming the subsystems at each site. The user trials, though, are when you may see things come up that you may not have been able to test or have foreseen in the original engineering tests. I can’t understate their importance. Having actual users run through an exercise helps us identify issues [only they would notice]. Both 2 RCR and the Vandoos were really professional and extremely passionate about urban ops.”

The Army has been training for urban operations in simulated environments for decades, but each base had developed its own footprint from available resources, mostly sea containers arranged to represent buildings. UOTS standardizes the training experience and integrates the villages into the Army’s larger Weapon Effects Simulation (WES) system, its training network that is itself undergoing a modernization effort – an initial request for information was released to industry in March. 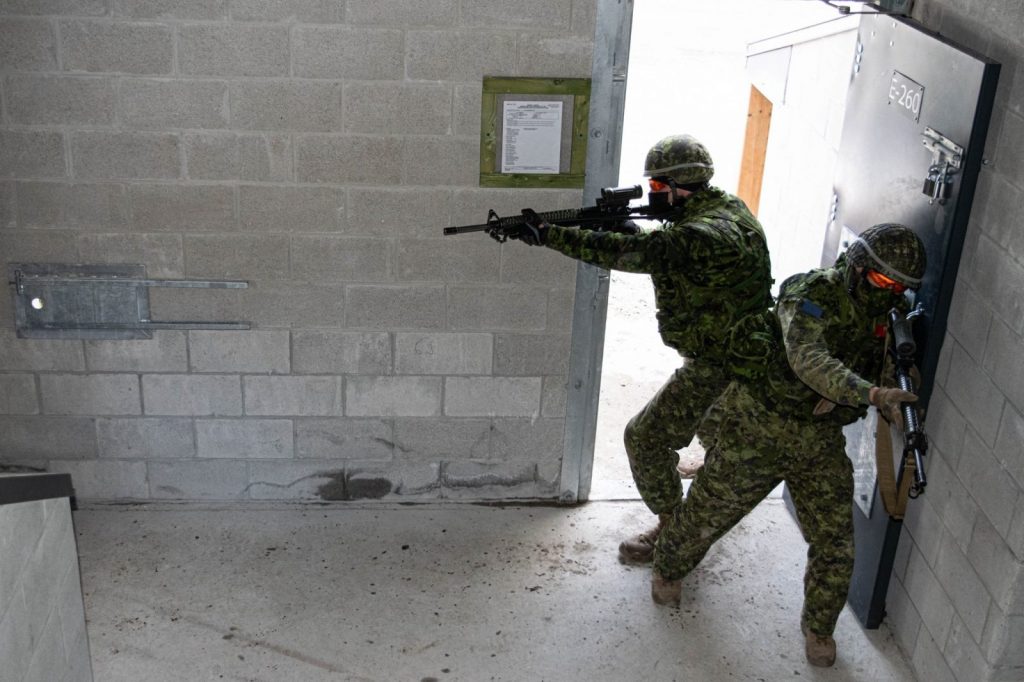 The buildings are concrete but can emulate the properties of wood or mud structures so that the resultant effects by blast from the UOTS fragmentation grenade and improvised explosive device (IED) simulators are patterned to reflect live fire. The interiors include doors breachable by kinetic force, including a battering ram. The fully instrumented structures feature infrared cameras, high-fidelity positional tracking of friendly and enemy forces, microphones, speakers, and variable lighting that can be affected by damage to dummy electrical panels.

“We can now do force-on-force training in a fairly adjudicated system,” observed Janek, a former warrant officer with the Princess Patricia’s Canadian Light Infantry. “Previously, it was bit of a judgment call as to who shot who first and how effective the shot was. This takes all that guess work out of it – you either did it or you did not.”

UOTS now allows exercise observer-controllers, the former adjudicators of weapons fire and blasts from IEDs, to observe from the periphery of a section, rather than in advance of it, which sometimes “tipped off” soldiers to a possible threat awaiting them in a room.

“The feedback I’ve been getting so far from the user units has been overwhelmingly positive,” said Janek. “I always ask for negative comments and I do get some, but the positives far outweigh the points to improve on.” The few issues with integration of components into the WES environment identified during the first user trial have been resolved but still need to be tested, he added.

More significant for both instructors and students, the UOTS will fundamentally change how urban operations skills are taught and absorbed. From the exercise control (EXCON) centre or from ruggedized tablets in the village, instructors can map the floor plan of multiple buildings and monitor soldier icons on each floor or through a live video link, assessing how they navigate corridors, round corners and entre rooms.

“In playback mode, you can see the action in video, 2D or 3D like you would in a video game,” said Janek. “You can make the buildings semi-transparent and see where everybody is at one time in the buildings and surrounding area, which is particularly useful for big muscle movements like seeing how sections or platoons move through an objective.”

With the ruggedized tablets, instructors or observer-controllers can conduct quick hot washes or more detailed after-action reviews with soldiers, drawing on video from their tablets or by plugging into one of the universal outlets and downloading information from the EXCON.

“The urban ops instructors who were running the tactical portion of my user trials really enjoyed using that. They were taking video of specific things they were seeing and using that for debriefs and it made it crystal clear to their training audience what they were talking about,” Janek noted.

The EXCON can track up to 3,000 entities at a time, from individual soldiers to vehicles, pop-up targets and minefields. It communicates with the buildings and entities via a central tower and a fiber network – the tower covers a two-kilometre radius around each village. Wainwright has two towers that cover the entire training area, including the UOTS village, which can track over 4,000 entities.

The EXCON facilities are located anywhere from 500 metres (in Gagetown) to 25 kilometres (in Wainwright) from the training village. They are operated by three representatives from Cubic Field Services Canada, the prime contractor for both UOTS and the WES system, and will coordinate with the training unit for the configuration of effects needed for an exercise.

Management of the UOTS facilities is being incorporated into the WES in-service support contract. The project will declare the village in Gagetown IOC (initial operating capability) and “open for use,” said Janek, once a new Contractor Conducted Logistics Support agreement is finalized this spring.

Some testing still remains on the WES soldier harness and the weapon small arms transmitter to confirm software patches, but otherwise UOTS site tests and user trials should reach completion by late summer, opening the door to larger exercises.

“It is a new system and we’re still figuring out what the demand for use will be,” Janek admitted. “But as with any new technology, there will be areas we can make better over time. I’ve noticed Cubic are very evolutionary in their thinking and try to produce the best training experience, I think over the years it will just get better and better.” 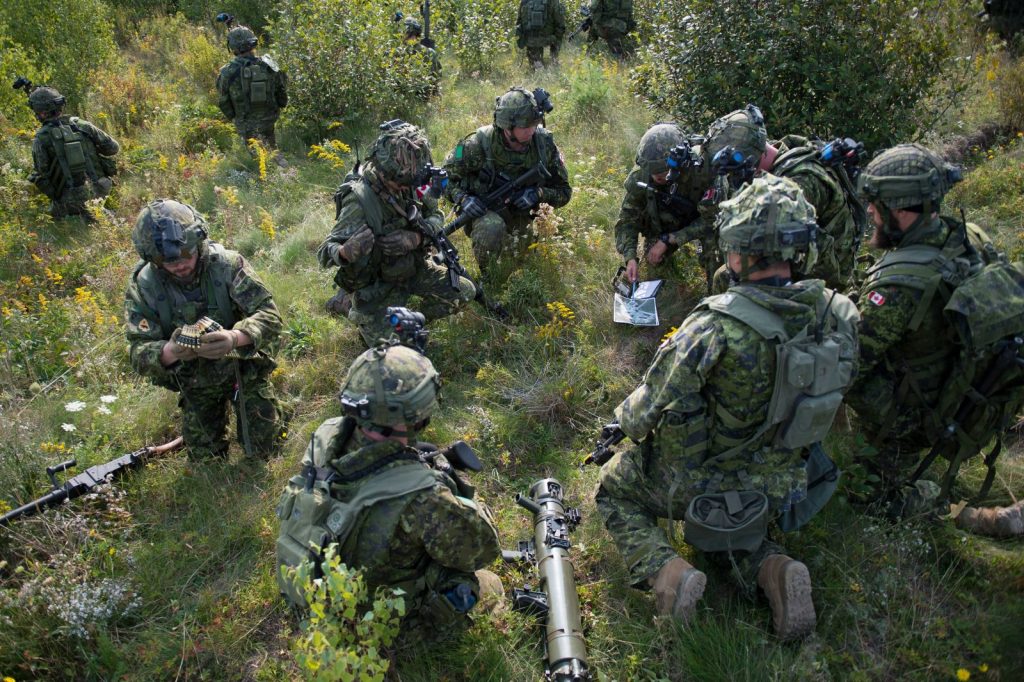 Members of 2 RCR plan for an advance on the urban village of Camp Petersville Gagetown during user trials. Photo: Cpl Stephanie Labossiere 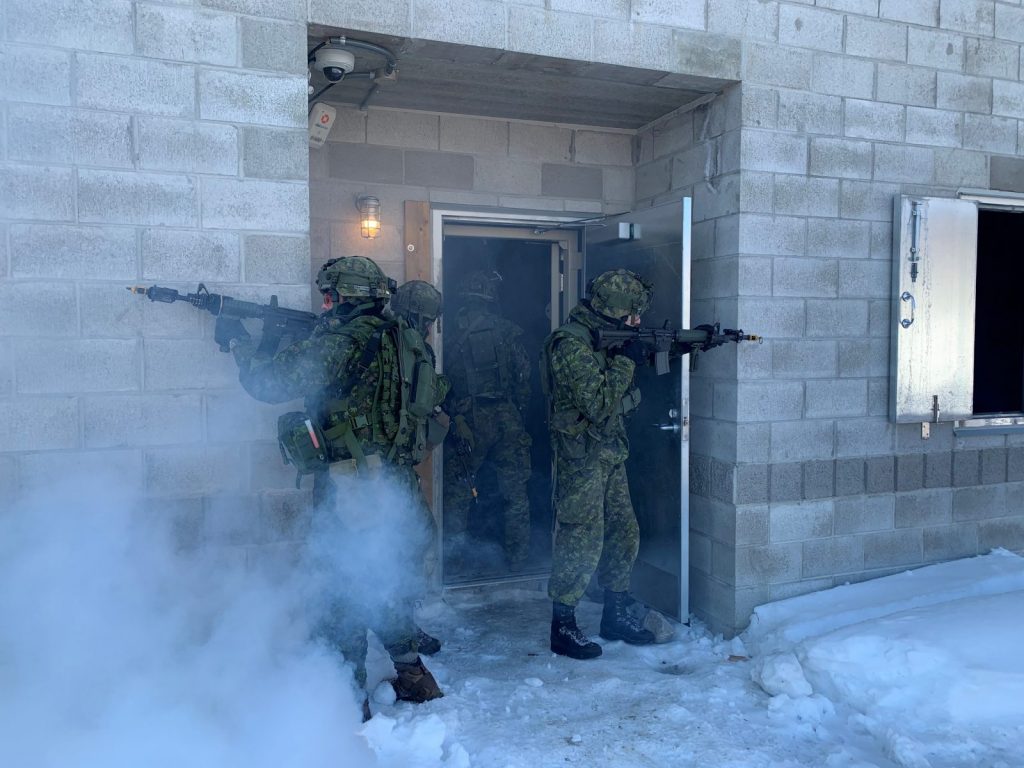