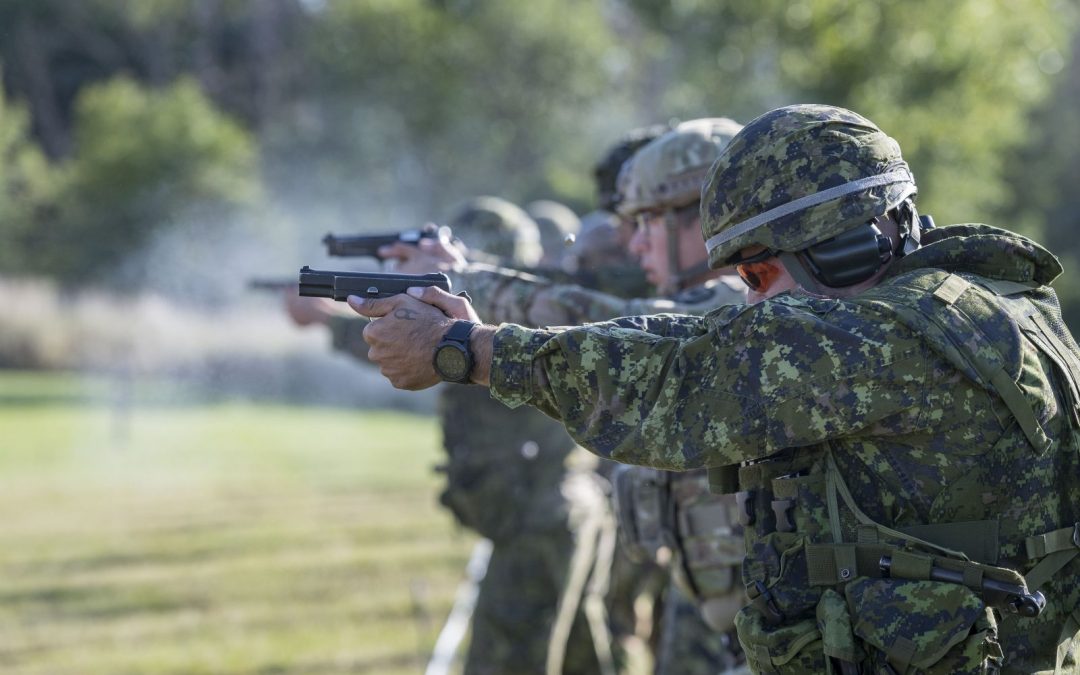 Army personnel who have been waiting for their vintage nine-millimetre Browning Hi-Power semi-automatic pistols to be replaced will have to wait a while longer. This is even though Hi-Power parts are no longer available – production of the 1930s design ended in 2017. When Colt Canada, the government’s Strategic Source and Centre of Excellence for Small Arms, receives a batch for repairs, it generally cannibalizes nearly a third to salvage the rest.

The need for new pistols was identified more than a decade ago. But when the government asked potential suppliers for feedback in 2011, it almost immediately called a timeout to reassess. It would be five more years before the Defence Acquisition Guide defined the General Service Pistol project further. By then, the potential procurement had grown from approximately 10,000 guns to between 15,000 and 25,000 at an estimated cost of $50 million.

A much scaled down project was re-initiated in 2017 and has slowly made its way through the procurement gates. Deliveries were expected to begin this year.

However, a May 2021 request for proposal (RFP) issued by Public Services and Procurement Canada for a new pistol and holster system elicited a complaint to the Canadian International Trade Tribunal (CITT) by Ottawa-based Rampart International, which represents Glock.

Rampart argued the technical specifications in the RFP breached international trade commitments. “They do not serve any legitimate operational requirement,” it claimed in its filing, and “favour a specific pistol design produced by SIG Sauer and Beretta.” International trade rules come into play because SIG Sauer’s corporate headquarters are in Switzerland and Fabrica d’Armi Pietro Beretta is privately held in Italy.

The upshot was that CITT told the government in November that it had to issue a new RFP which, if it still referred to a particular design or type of pistol, “shall include words such as ‘or equivalent’ in the tender documentation.”

Rampart complained about a requirement for a removable trigger group (RTG) developed by SIG Sauer to enable the same components to be used in different frames. It also protested requirements for a loaded chamber indicator (LCI), a forward trigger return, a striker deactivation button (STB) or similar mechanism, and a manual safety.

The government countered that the RTG was operationally legitimate and easier to maintain. As for the LCI and STB, those were critical to operational safety. Moreover, Major Carl Gendron, the Department of National Defence’s (DND) project director and authority on infantry weapons, filed an affidavit with Keith Grosser, PSPC’s contracting authority, in which they told the CITT that DND had conducted extensive testing and market research from 2015 to 2017, including gathering competition-level shooters’ opinions of different pistols. DND also purchased various models to strip and assemble and monitored the U.S. Army’s acquisition of a new service pistol derived from the SIG Sauer. That led to a draft Statement of Requirements in May 2018 and a draft RFP in February 2021.

As an intervenor in the CITT process, MD Charlton, an Ottawa-area company that includes SIG Sauer in its product line, stated Rampart was “trying to redefine” the project’s parameters to accommodate “the limited functionality” of its pistols. MDC also claimed Rampart had known as early as 2016 that the Army wanted modular pistols with a top-mounted LCI – not the smaller side-mounted LCI common on Glocks.

Randy Turner, a retired Canadian Armed Forces (CAF) member with a special forces (SOF) background and owner of Direct Action, an Ottawa firearms training business, was an expert witness for Rampart. He said the LCI should not be a soldier’s primary way to determine whether there is a chambered round, and that CAF protocol is a “press check” to confirm visually and manually and that the LCI was not a safety feature as claimed.

A DND weapons technician told the Tribunal that a top-mounted LCI had been specified for training and field considerations and said Turner’s evidence was based solely on fieldwork and that SOF experience did not reflect the needs of all CAF personnel. He also stated that the top-mount is more visible and, hence, generally safer in a training environment, a point echoed by Gendron in a subsequent interview with Canadian Army Today.

Even so, the CITT’s recommendations forced the government to reboot the RFP in late February. The pistol is now defined as “adaptable” rather than “modular.” Gendron said “the modern capabilities sought by the Army will remain the same,” which suggests the overall timeframe for delivering an effective new handgun should not be seriously impacted.