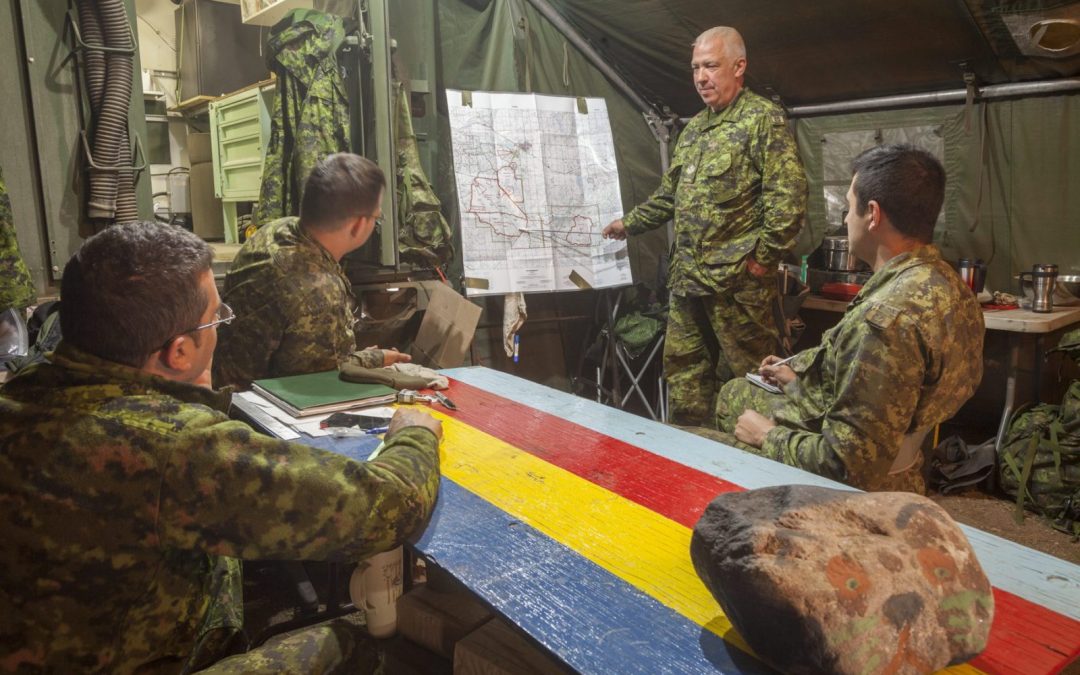 Anniversaries have a way of encouraging introspection. Last year’s anniversary of the Royal Canadian Electrical and Mechanical Engineers (RCEME) Corps was no exception. After 75 years of evolving roles, RCEME is in a transition, and not for the first time.

The Corps provides the Army’s organic equipment engineering, maintenance and support. Since its inception during the Second World War, the Corps has conducted repair and maintenance from the forward edge of battle back through the various repair lines in theatre, all the way to large Canadian maintenance and repair depots. As well as being skilled technicians, technologists or engineers, RCEME members are also extensively cross-trained as combat infantry, a point of pride throughout the Corps.

Brigadier-General Robert Dundon, with over 30 years of experience in the Corps, is Director General of Land Equipment Program Management (DGLEPM). He underscores the importance of RCEME’s motto, Arte et Marte, (By Skill and By Fighting) and firmly believes it must remain at the heart of the Corps’ values.

“On the battlefield, we have a monopoly on maintenance and we have to be cognizant that there’s no one behind us, no civilian contractor,” he said. “We are the capability of last resort and we have to think that way.”

There have been four distinct phases in the evolution of the Corps, and the RCEME Craftsman who waterproofed thousands of vehicles to support the landings in Normandy during the Second World War would scarcely recognize the technicians in Latvia today who are repairing small reconnaissance drones.

From its birth in 1944 through the entire Cold War, the combat service support duties of the Corps existed in a line-based system designed to accommodate the presence of effective artillery and air-ground attack capability in the opposing armies. The work performed among the various lines was based on what was required to counter the movement and engagement times for Soviet artillery units.

For most of that era, technology advanced at a moderate pace. The soldier-technicians were trained to defend themselves in duties such as mobile repair team calls, where vehicles were recovered from the field of battle. Maintenance platoons and maintenance companies performed their own organic defensive duties and RCEME personnel took as much pride in their ability to fight as they did in their dedication to keeping the Army’s weapons and equipment operating.

With the collapse of the Soviet Union, there followed a period of almost 20 years of deployments in support of the United Nations and NATO. Canadian units operated in theatres such as the former Yugoslavia, where the threat was largely still Soviet-trained. A move toward more centralized maintenance support began at that time and it shaped the RCEME presence during those deployments.

After the terrorist attacks of 9/11, RCEME units deployed to Afghanistan in support of NATO operations. There they served within a system largely controlled and defined by United States Army doctrine. Complete air superiority and an almost total lack of any artillery threat allowed for even more centralization that had begun in the previous years. It was taken to extremes in 2006 when the bulk of the Canadian Army’s support elements occupied space within the large superbase at Kandahar Airfield (KAF).

Outside the fences of KAF, craftsmen performed duties in battlefield recovery and support to the various forward operating bases where the maintainers were very much in the line of fire. The bulk of the time-consuming work, however, was performed inside the secure perimeter of KAF.

Back in Canada, the same period saw another change as increasingly complex equipment pushed the Army’s requirement for outside contracting. Civilian companies began performing some of the maintenance and repair duties in Canada that had previously been done internally by the Canadian Armed Forces. The effect of that has been a transfer of work and far greater interaction between maintainers and civilian contractors. 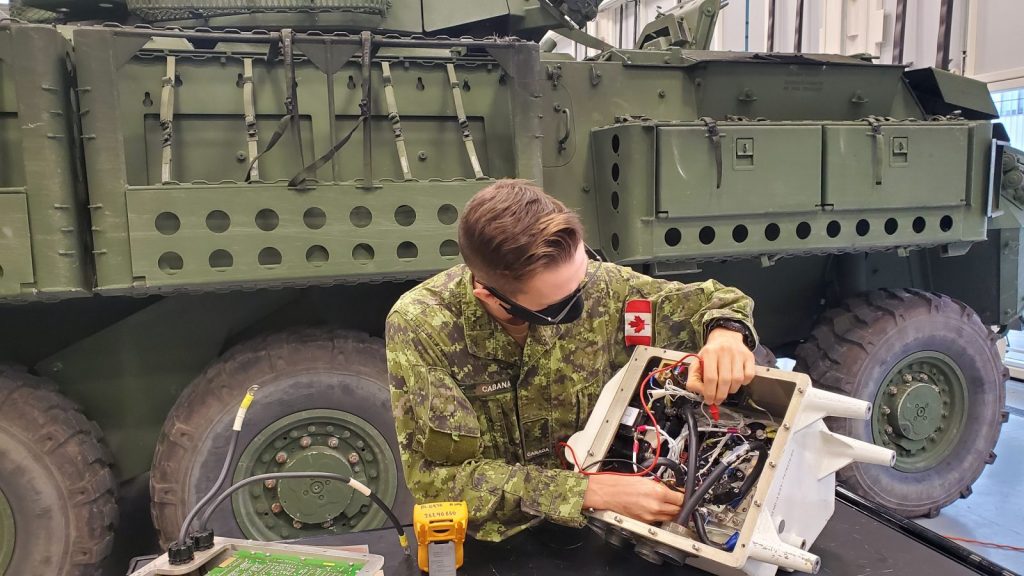 Today, RCEME is involved in deterrence operations in the Baltic States, as well as in Iraq, often conducted in uncertain environments. While many of those deployments have been relatively modest, the challenges they’ve generated have been considerable. And with the possible return of state-on-state conflict and an increase in complex domestic natural disaster responses under the umbrella of Operation Lentus, new challenges are emerging.

Among the emerging trends is specialization, where no craftsman can hope to know everything she or he needs to in order to support increasingly complex equipment. Greater centralization remains a factor. So too does the rapid integration of civilian and military maintenance support, typified by contracts such as those supporting the Land Command Support System (LCSS); one civilian contractor for engineering and integration and another to support the system’s extensive software have forced an increasing amount of adaptability in RCEME’s way of doing business.

Other factors affecting the Corps include the increasing cost and digitization of systems, the ever-expanding size and weight of the Army’s heaviest tanks and armoured vehicles, and the adoption of autonomy on battlefields, where mass-effect artillery has been replaced by long-range precision weapons.

At the RCEME’s executive level, the catchphrase “agile and relevant” has been used to inform the Corps’ response to these challenges.

One of the first and most important things to be addressed was the growing dissonance between the demands of future conflicts and the seemingly rigid structure of RCEME’s Land Equipment Management System (LEMS). While recent years have seemed to suggest irrelevance for the old-style lines of maintenance, the inherent safety and effectiveness of such modes may well be required if state-on-state warfare is resumed. A modernized, more flexible LEMS system has to fully empower agile soldier-technicians on the future battlefield.

Relevance will depend on expanding the technical skills of RCEME engineers, technicians, and technologists. Investing in them will allow for more advanced battlefield repair and increased understanding of digitization and its protection from cyber threats. Advances in autonomous systems and in artificial intelligence that offers more effective predictive maintenance will be critical to both agility and relevance.

It’s worth noting that Army systems and equipment are now approaching a level of complexity that both the Navy and the Air Force have worked to support for many years. Like those maintainers, RCEME needs to specialize and focus on advanced technology to remain relevant.

On a practical level, the Corps must return to its previous emphasis on productivity measured through repair time and overall rates of repair. Rates of 95 percent serviceability in a formation’s equipment would be envied today – the complexity and cost to repair some fleets has dropped serviceability to as low as 50 percent. Adapting available technology to allow reach back to specialized knowledge could provide significant improvements in this area. For example, pictures and video shared between distant locations could provide increased on-site ability to repair vehicles that today are often shipped across provinces to a centralized repair depot.

As DGLEPM, Dundon often finds himself trying to chart a course for the Corps through these challenges. He believes that the traditional bundling of RCEME’s functions into the overall logistical field of Combat Service Support hamstrings the kind of creative doctrine that will be required to maintain the Corps’ effectiveness.

“We need to break out of the box,” he said. “We need to work toward our own original strategy, structure, systems, skills, and culture. Agility means recognizing RCEME has to adapt to swings in the strategic and tactical situation. Relevance for us means embracing technology in all its forms.  Western strategy for the foreseeable future will be based on technological overmatch. We need to enable it.”