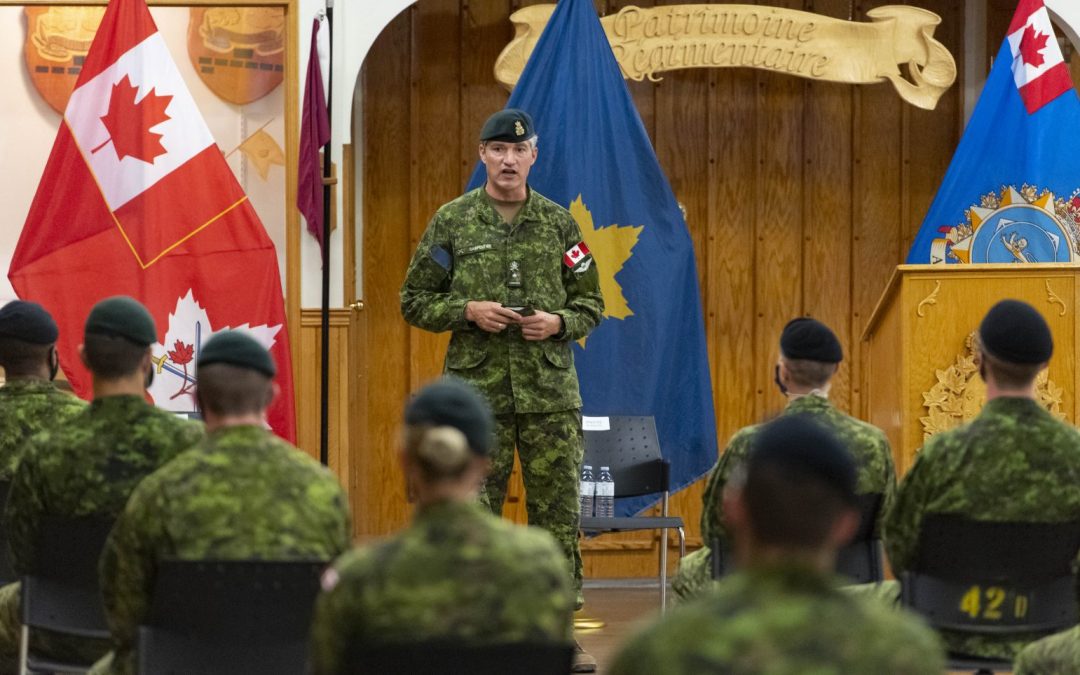 Confronting and overcoming obstacles is a common occurrence on the road to high readiness. In fact, the friction generated throughout training exercises is often deliberate and intended to confirm the combat effectiveness of soldiers for global deployment.

In July 2021, the Regular and Reserve Force members of 2nd Canadian Division (2 Cdn Div) will assume responsibility as the Army’s high readiness force, prepared to complete rotations in Iraq, Ukraine, Latvia and elsewhere, and to react to domestic requests for assistance.

To get there, however, the Division will navigate a road unlike any of its recent predecessors. Key training events will still provide the units the necessary qualifications to validate their readiness to deploy, but sections of their road could be more virtual than live as they adapt to restrictions imposed by the COVID-19 pandemic.

“The pandemic requires that the tools to conduct our training be adapted to the situation,” said Brigadier-General Gervais Carpentier.

Carpentier assumed command of 2 Cdn Div and Joint Task Force East in August 2019 and understands the training rhythm of the Division as well as anyone. A member of the Royal 22e Régiment, he commanded the 3rd Battalion’s parachute company, the 2nd Battalion, and served as Chief of Staff at 5 Canadian Mechanized Brigade Group (5 CMBG) and most recently as Commandant of the Royal Military College Saint-Jean. He commanded a Canadian Special Operations Forces Command attack squadron and deployed on missions in Croatia, Bosnia and Herzegovina, Haiti and Afghanistan twice.

As with everything else that has already happened in 2020, the road to high readiness will look different, he acknowledged. The training sequences and objectives remain the same, but “the way the training activities are delivered” will require some out-of-the-box thinking. The Division has already proved itself capable of adjusting on the fly. In April, when the Quebec government issued an urgent and unusual call for assistance, around 1,500 of its Regular and Reserve Force members, including Canadian Forces Health Services personnel, were deployed into 47 long-term care facilities across the province under Operation Laser.

Carpentier attributed the success of that mission to a structure and capability resident in the Division’s Immediate Response Unit and Territorial Battle Group, under the command of 5 CMBG. In 2017 and again in 2019, that structure facilitated the deployment of 2,900 and 1,500 troops, respectively, to assist the province with flood relief efforts under Operation Lentus. 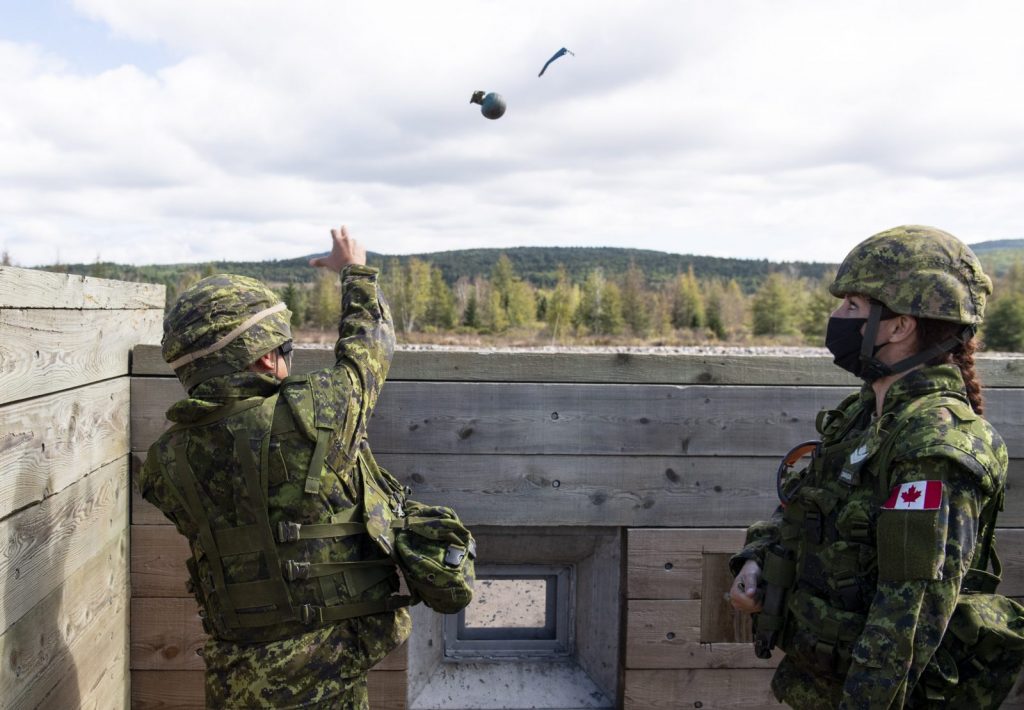 Like the rest of the Army, 2 Cdn Div experienced an almost four-month pause to most of its training regime. Restarting the “individual training (IT) machine” was critical, he said. However, while technical qualification and leadership courses have resumed and Regular and Reserve Force units are conducting individual training, the collective exercises in Valcartier and elsewhere, including the United States, that usually define the fall schedule are being reassessed.

Carpentier said a brigade Level 6 computer-assisted exercise was planned for the late fall, and 5 CMBG’s winter warfare exercise, Rafale Blanche, will go ahead, albeit with more virtual elements. But the big changes could come in the New Year.

The participation of a company in the U.S.-led Joint Warfighter Assessment series, originally planned for spring 2020 in Germany, may now become a virtual event if travel remains restricted. “We’ll be taking part soon in the initial planning conference, but we’re looking at being part of it from a remote location in Quebec,” he said.

Unified Resolve, the Army’s premier computer-assisted training event for the brigade headquarters preparing for deployment, will be even more dispersed than previous years. The exercise is “a key training event for 5 Brigade,” he noted, and could involve large-scale movement of formations in Valcartier and elsewhere in Quebec, interacting with simulated formations, rather than a static headquarters responding to realistic but simulated scenarios designed to test its command and control capabilities.

The Division has capitalized on a number of online tools to conduct courses remotely and to exercise command and control of deployed units in long-term care facilities and respond to three separate requests for the assistance of Canadian Rangers in northern communities. Some of those could come in to play to facilitate exercises, Carpentier suggested. “Our leaders will continue to be innovative in how we use technology.”

One of his challenges could be integrating Reserve units into Regular Force activities if collective exercises are curtailed. The Reserve units have been mission tasked to provide mortars, assault pioneers, cyber protection, and other capabilities that could contribute to operations globally.  The integration will happen, he pledged, even if some of it has to be done virtually.

As part of a change to the Army’s Managed Readiness Plan to have one division rotating through operations and another on standby to meet the “concurrency of operations” requirements laid out in the government’s 2017 defence policy, 5 CMBG will not attend Exercise Maple Resolve, the Army’s largest brigade-level exercise, next spring. Instead, brigade units will undergo mission-specific training for battle group formations in advance of the first of two rotations deploying to Latvia and elsewhere.

1 Canadian Mechanized Brigade Group will assume the role of “brigade in the box” in Wainwright, Alta., as it prepares to hold a readiness posture for the 12 months beginning July 2021, before taking over operations from 5 CMBG in 2022. Instead, 5 Brigade will likely conduct theatre-specific mission training at that time.

The virtual roles may not be ideal, but they serve a purpose, said Carpentier. “In our collective training, force protection measures will be paramount. Since this pandemic started, we’ve been building strong foundations and we want to continue keeping people safe, avoiding becoming vectors of propagation for the virus and protecting the force.” 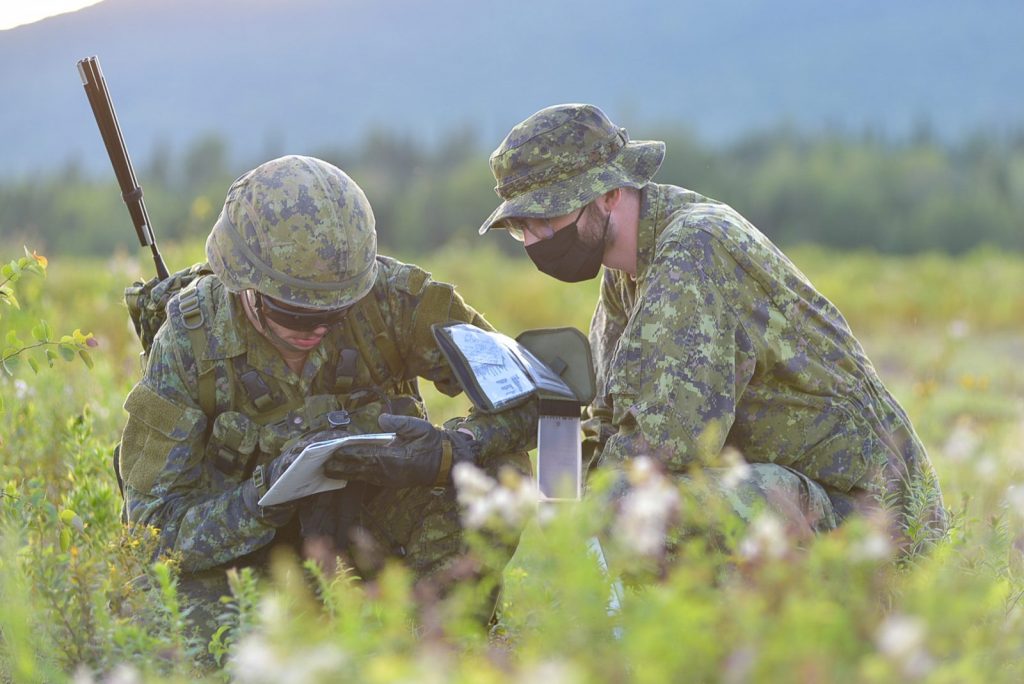 COVID-19 has disrupted the training schedule, but it won’t prevent the Division from meeting its obligation to generate forces ready for deployment, he added, including having personnel available to respond to domestic disasters and further pandemic assistance.

“I am very comfortable with how we are able to align things to be ready for our expeditionary deployments,” he said. “There is resident knowledge and experience. We are going to have plenty of time to do all of the individual training that is required, to complete the proper ratio of qualifications before deployment, and the time to do our mission-specific training.”

While the pandemic may be the primary obstacle along the road to high readiness, Carpentier is using several recent incidents of racist and hateful behaviour and sexual harassment in the Canadian Armed Forces to reinforce the Division’s ethics, values and code of conduct. Serving with honour is inculcated in professional military education, but the commander wants to ensure a culture of respect for all Canadians, regardless of ethnicity, sexual orientation or religion, is well understood and accepted.

“It is one thing to talk about it in a formal setting, in a classroom on a course, but it has to be part of what we talk about in units, in barracks. We understand courage under fire but we need to emphasize that courage is also required to ensure a culture that fosters effective and cohesive teams. We need that courage in garrison in everyday life. We need to speak up at the appropriate moment when we witness something.”