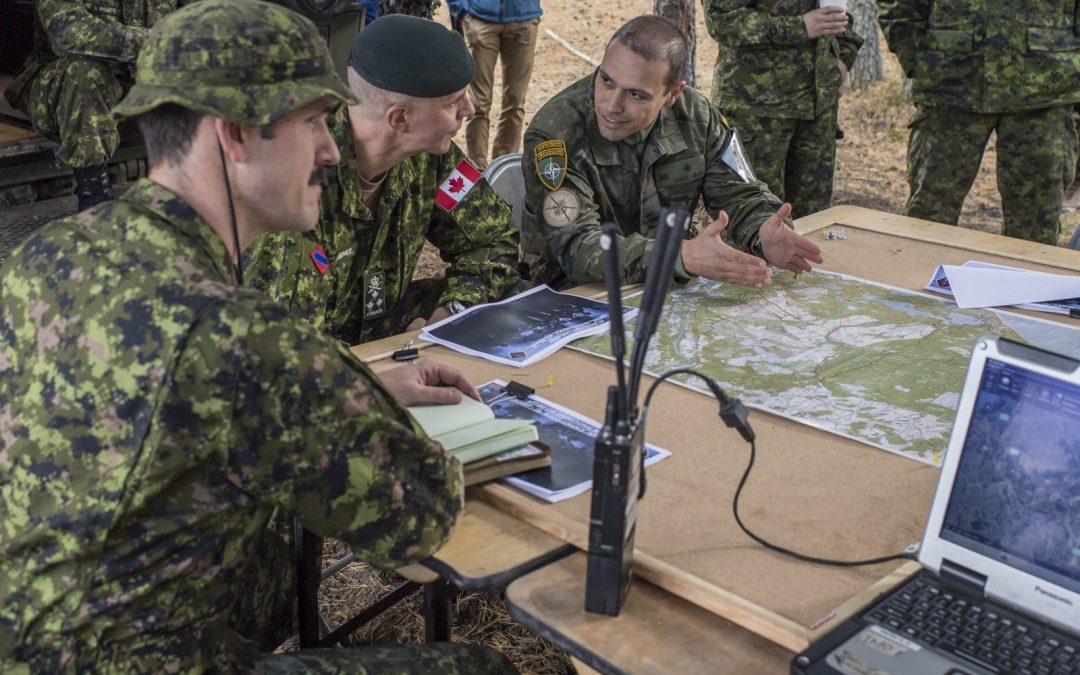 To digitally transform, the Army will need to adapt new commercial capabilities. Many are already converging on the battlespace.

Remember those PowerPoint slides of 20 years ago with all the lightning bolts connecting troops of soldiers to icons of vehicles and artillery, to various headquarters, and to aircraft and satellites overhead? “It was pure fantasy,” Chris Pogue admits. “It was what we wanted it to be, but nobody could make it happen.”

Pogue, a former CC-130 Hercules aircrew member with the Royal Canadian Air Force (RCAF), is the chief executive officer of Thales Canada, which has supported the Army’s Land Command Support System (LCSS) for years and is currently among the companies delivering the LAV Reconnaissance Surveillance System (LRSS) project that is replacing 141 Coyote surveillance vehicles with 66 fully integrated surveillance platforms.

“Today,” he said, “those lightning bolt diagrams are completely realizable. The technology has progressed dramatically towards achieving what we thought we wanted to be able to do 20 years ago. And that gives promise to the Army’s plan to digitize.”

Since retiring from the RCAF in 2003, Pogue has been immersed in leading-edge technology, from the virtual and augmented reality of simulated training systems with CAE Defence, to advanced system of systems integration with General Dynamics Mission Systems Canada, and most recently, space-based surveillance, robotics and satellite communications with MDA.

Through the late 1990s and early 2000s, militaries and think tanks talked of a revolution in military affairs and net-centric warfare, but the digital backbone necessary to make much of that happen remained elusive. Capabilities from augmented reality to autonomous systems, artificial intelligence, machine learning, and secure, high-speed connectivity evolved along their own paths, underpinned by the progress of digitization.

What was once fiction, however, may now be possible. Pogue believes we are at “a digital nexus of these technologies,” one the Army is “well positioned to be advantaged by.”

The Army’s 2020 modernization strategy sees “digital excellence” as foundational to modernization and calls for future networks that are “designed and implemented to enhance shared understanding, the speed of decision-making, and the effectiveness of command and control,” all of which has the “cumulative potential for transformational change … [E]merging advances in artificial intelligence, such as its use within predictive planning tools, has the potential to greatly shorten the decision-action cycle.”

While the LCSS is often described as the Army’s digital command and control backbone, it is far from a unified network. There are multiple variants, each purpose-built to support different missions. Pogue suggests the lessons learned from constructing and supporting those variations have been valuable learning experiences and have helped steer a logical evolution of the LCSS. But the Army is now in a position “to leverage what is going on in the commercial sector” as it grapples with the requirements of a future tactical network that must align seamlessly with a joint Canadian Armed Forces network architecture that is interoperable with ABCANZ (America, Britain, Canada, Australia, New Zealand) army and NATO networks.

Investment over the years in the LCSS has reached a point “where you are seeing you can build it with common COTS (commercial-off-the-shelf) tools, keep it open, secure the data, and take it to the tactical edge,” he explained.

Thales, for example, was selected in January 2021 to provide NATO with its first theatre-level deployable defence cloud structure, known as Nexium Defence Cloud, a commercial capability modified for the security and interoperability requirements of a multinational army operating at the tactical edge.

Augmented intelligence (AI) – a term Pogue prefers over artificial intelligence – and machine learning are the tools to help the Army organize and understand the massive volume of sensor and other data in the battlespace. But commanders and soldiers in mission critical environments will only trust and accept information over a cloud network, no matter how well secured, if the AI is explainable and the underlying algorithms are understood.

“If I can’t trust that information, I can’t make a decision,” Pogue acknowledged. “The environment is going to be complicated, chaotic, with degrees of ambiguity. How do we address that? This is where I think augmented intelligence serves as a powerful component of that nexus.”

Here as well, Thales has invested in commercial applications such as TrustNest and Cognitive Shadow to develop explainable AI and employ it to help guide decision makers by understanding their typical thinking patterns in difficult circumstances.

Ultimately, the convergence of capabilities could give commanders more time to make critical decisions, he said, creating more decision space in U.S. Air Force Colonel John Boyd’s OODA Loop cycle of Observe, Orient, Decide and Act. Business leaders live in the same loop, he notes, and are adopting these technologies to stay ahead of competitors. Quantum sensors will radically change Observe; AI, machine learning and big data analytics will transform Orient and guide soldiers to faster decisions; and connectivity, the degree to which systems of systems are connected and trust each other, will alter how soldiers Decide and then Act.

“If we have trust and understand emergent behaviours, understand the second and third order effects that come from system of systems [interaction], then when we decide we are much more rapid to act,” he suggested. “The evolution of tools and technologies has allowed us to focus on places that can give us more time than potentially the threat has.” 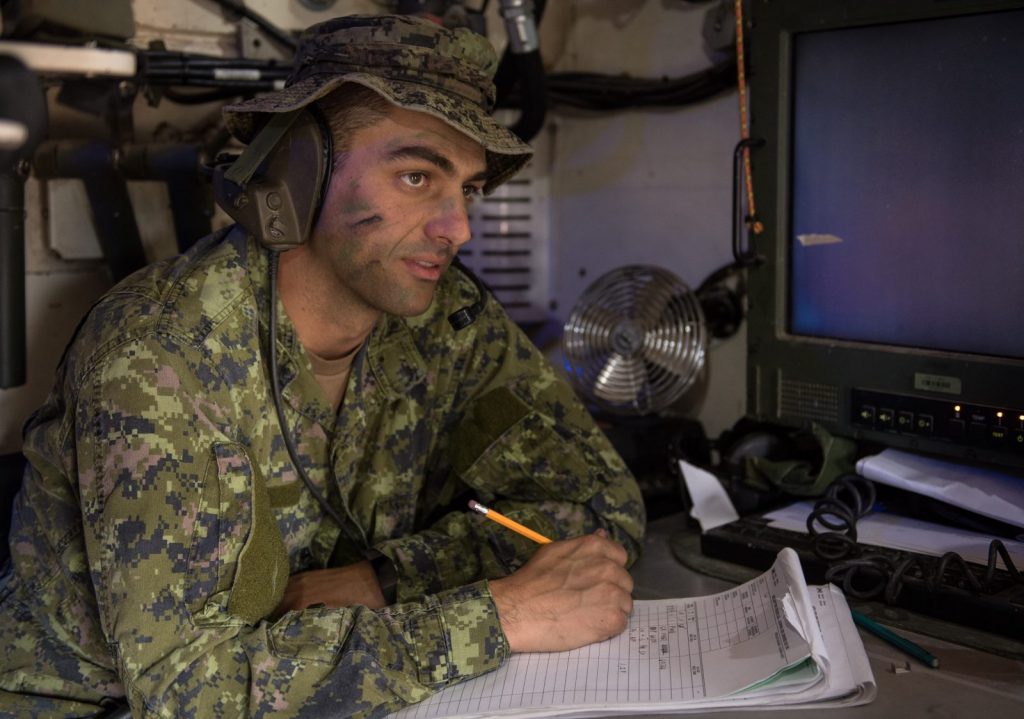 WO Tyler Chetwynd, candidate on the Assistant Instructor-in-Gunnery course, during a live-fire exercise in October 2019. Photo: Cpl Genevieve Lapointe

FROM THE TESTBED TO THE BATTLEFIELD

Pogue believes many of the technological capabilities the Army is seeking can be found in Canadian small and medium companies, entrepreneurs “who have adopted digital transformation in the past decade as part of their fundamental business model.” Some had to “adapt or die” in recent years and have undergone digital culture and mindset changes akin to what the Army wants to achieve.

But testing and validating tech for the battlefield is an arduous process that often involves a lengthy acquisition process. Thales is preparing to deploy in Canada a concept called the Combat Digital Platform (CDP), a multi-sided platform along the lines of Shopify for companies to connect with one another and Thales and trial their technology. Rather than a stage for commerce, CDP would be a secure space to replicate the complex conditions of an austere and hostile battlefield – “the kind of environments we put decision makers in in mission critical operations” – to test and validate their digital concepts.

“Everything you do there will be applicable to the field,” Pogue said. “It will allow you to bring augmented intelligence into that digital frame, move incredibly large datasets together, and orient them in new ways to extract new pieces of information.” The tools and means of sharing information, such as analytical architecture like Data Mesh, “will be built into the Combat Digital Platform.”

Like a sandbox, it would allow companies to connect to a digital backbone almost identical to the Army’s future network and, in a cyber secure environment, have end users evaluate and validate a C4ISR and integrated command and control capability in the same way they would deploy it in the field.

It would also have the potential to reduce acquisition costs and speed up the procurement cycle, he suggested. When soldiers can bring a technology from a testbed to the field with minimal change, “there is a decreased learning curve. It becomes more intuitive. Training costs aren’t suddenly exponential. We see CDP as a key environment, not only to engage the innovation culture of small Canadian companies, but allow the Army to engage and test future concepts in real time and potentially deploy much faster.”

The Army’s modernization strategy places a premium on cyber mission assurance (CMA). “Cyber infrastructure, whether network or vehicle platforms, presents potential single points of failure on operations and in the day-to-day business of the institution,” the document states. So, CMA is “a critical operational consideration … to safeguard system availability, integrity, authentication, confidentiality, and mission assurance of networks, systems and platforms unique to the Canadian Army.”

Pogue concurs about the disruptive potential of cyber threats. But he suggests some of that concern could be mitigated by employing frugal AI at the tactical edge, a concept Thales is developing at its digital factory in Montreal. Rather than requiring large quantities of data to move back and forth over a network, frugal AI would employ machine learning algorithms that do not need “truck loads of data” to learn. “It comes from that edge deployment of AI, how we support trust and explainable decisions, but with less data,” said Pogue. “It is early days there.”

Effective digital transformation will demand a shift in mindset, a way of thinking about problems that is digital in its approach, he noted, but none of the concepts being proposed are new. “We’ve been talking about them for 20 years; this digital nexus is making them a reality today.”

The challenge may be how to import that commercially developed technology into a complex battlespace in a faster and more efficient way than the current procurement system allows. Pogue has seen the potential of relational contracts with Canadarm 3 for the lunar gateway while at MDA and now with the in-service support contract for the Royal Canadian Navy’s Arctic and Offshore Patrol Ship and Joint Support Ship, known as AJISS. The emphasis on performance – ship availability – instead of meeting specifications rebalances some of the risk that can affect the relationship.

“It is perfect for innovation,” he said. “It has incentives for industry and [the military] to innovate. Relational contracting is the most promising procurement evolution I have seen. It has the potential to deliver not only faster procurement, but better procurement, and potentially cheaper because there are incentives to make it cheaper. But we need that shift in mindset to make it work. It is trust-based contracting.” 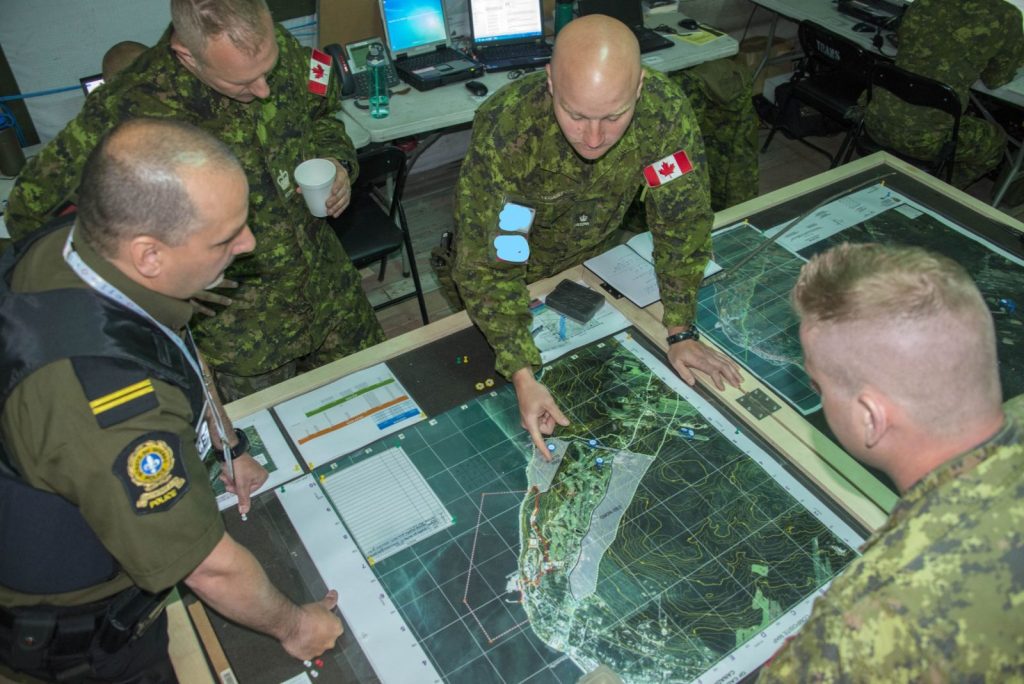 The command team of 3rd Battalion, R22eR, and an officer of the Surete du Quebec examine an area of responsibility during the G7 Summit in June 2018.