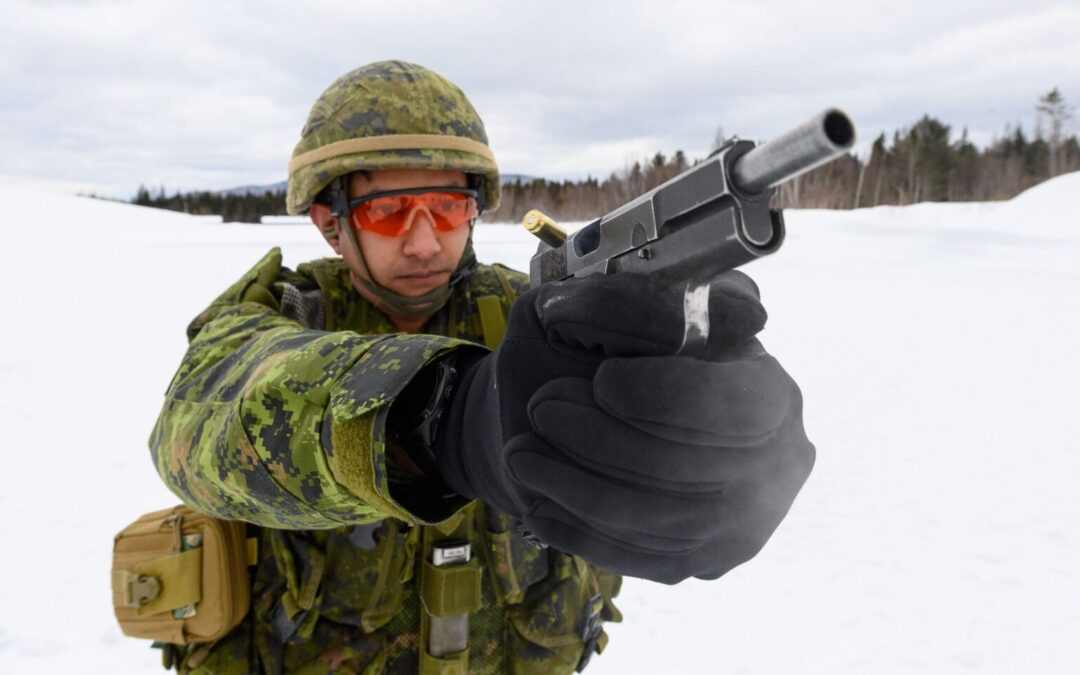 More than a decade after the Canadian Armed Forces (CAF) identified the need for a new general service pistol, the first of at least 7,000 SIG Sauer P320 semi-automatics should be delivered to the Army in mid-2023, along with magazines, holsters and spares as well as operator and maintainer training.

But it will be later in the year before the modular and mostly polymer composite full-frame P320s make their way through the distribution network to individual units. Delivery times and Department of National Defence (DND) “system acceptance protocols” were discussed during a visit by the project team to SIG Sauer’s factory in New Hampshire in late October, and 50 should be handed over before year’s end for “systems acceptance testing.”

Designated the C-22, the new pistols will be supplied by M.D. Charlton (MDC) Company of Victoria to replace the Army’s 1930s-design Browning Hi-Powers. In announcing the contract with MDC in early October, Defence Minister Anita Anand said it would “help ensure the continued operational readiness and effectiveness of all our members.” Helena Jaczek, her counterpart at Public Services and Procurement Canada (PSPC), said that in addition to giving troops “modern reliable pistols,” the contract would support unspecified “economic opportunities” for domestic industry.

The initial contract is worth $4.3 million but there is an option for up to 9,500 more P320s to cover remaining CAF requirements. The overall potential value is estimated at $10.3 million over five years.

A variant of a pistol that has been in service with other military and police forces since 2007, the P320 is fired by an internal recoil-operated striker rather than an external hammer. The latter is an occasionally annoying and painful feature of the Browning, which can “bite” the shooter when the hammer’s spur hits the shooter’s hand behind the pistol’s abbreviated tang.

Unlike modern double-action semi-automatics, the single-action Browning trigger is not connected to the hammer. It only takes a pull on the trigger or a pull-back on the hammer and then a trigger-pull to fire. That’s a possible accident waiting to happen and potentially deadly in theatre where noise can benefit the enemy. MDC says the hammerless feature “dramatically reduces the chances of the gun snagging and firing accidentally.”

In November 2020 a Canadian Special Operations Forces member was wounded in the leg when his holstered P320 discharged at a base near Ottawa. An independent investigation concluded the cause was “a partial depression of the trigger by a foreign object combined with simultaneous movement of the slide.” Also, the operator was using a “far from optimal” modified holster designed for the unit’s older P226s, which were replaced with P320s in 2019.

While the Army’s new guns will come from New Hampshire through MDC, their holsters with an active retention device are from Montana-based Blackhawk. Art Hall, a 30-year Army veteran and lead engineer on the pistol project, said the Army specified a drop-leg mounting, but it also can be body armour- or belt-mounted. 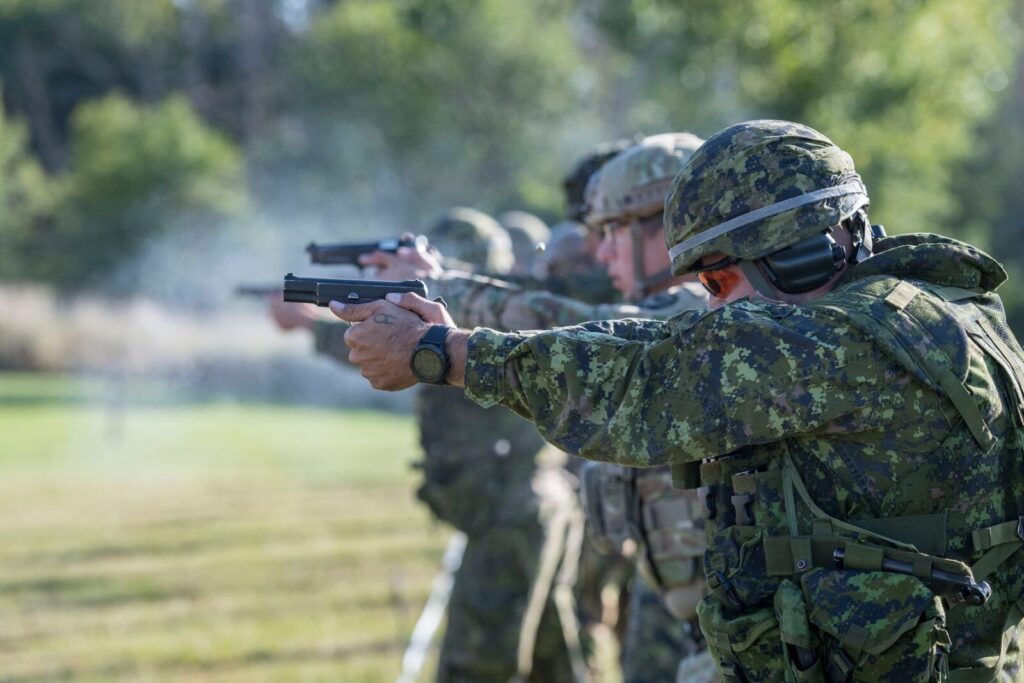 The lengthy procurement process suffered a setback in 2021 after a regulatory challenge by Ottawa-based Rampart International to the Canadian International Trade Tribunal (CITT). Rampart, which represents Glock, complained that the Army favoured “a specific pistol design produced by SIG Sauer and Beretta.” Trade rules came into play because SIG Sauer’s corporate headquarters are in Switzerland and Fabrica d’Armi Pietro Beretta is privately-held in Italy.

Rampart also challenged a requirement for a removable trigger group (RTG) developed by SIG Sauer to enable the same components to be used in different frames. It also protested requirements for a loaded chamber indicator (LCI), a forward trigger return, a striker deactivation button (STB) or similar mechanism, and a manual safety.

The government said the RTG requirement was operationally legitimate and easier to maintain. As for the LCI and STB, those were critical safety requirements. Moreover, an affidavit filed with the CITT by Keith Grosser, PSPC’s contracting authority, and Major Carl Gendron, DND’s project director and authority on infantry weapons, noted that DND had conducted extensive testing and market research from 2015 to 2017, including competition-level shooters’ opinions of different pistols. It also purchased various models to strip and assemble.

MDC said Rampart was “trying to redefine” the project’s parameters to accommodate Glocks and that Rampart had known as early as 2016 that the Army wanted modular pistols with a top-mounted LCI – not the smaller side-mounted LCI common on Glocks and some other pistols.

The LCI on a P320 is readily visible to shooters rather than one requiring physical confirmation which can be compromised by gloves.

Rampart’s inference that the procurement deck had been stacked against it was dismissed by Gendron. “You could say the same for pretty much any winning bid after the fact,” he told Canadian Army Today. “We have very tight and unbiased bid evaluations for our small arms. The reality is that within the funding envelope, we always try to go for top-tier capabilities and features in every weapon and it will naturally restrict the field.”

Three sizes of grip modules mean the P320 is readily adaptable to a range of users. James Grant, DND’s small arms project manager within the office of Assistant Deputy Minister (Materiel), noted that while all P320s will be delivered with a medium-size grip, each unit will receive several small- and large-size grips to suit individual users.

The P320 uses the same NATO-standard nine-millimetre ammunition as the Browning and has similar ballistics. As well, it offers expanded magazine capacity, is lighter, and can be used effectively by left- and right-handed shooters. It also has an ambidextrous slide catch lever, a user-reversible magazine release, and can be field-stripped without tools.

The thoroughness of the procurement, notably the testing that led up to it, should give soldiers confidence in the Sig. Bulk firing tests through DND’s Quality Engineering Test Establishment at a civilian range near Ottawa disclosed no problems. “It passed our test,” said Grant. “Standards for everything were well-defined in the RFP and if it hadn’t passed, it would have been non-compliant.”

As for accuracy, the requirement was 12-centimetre groupings at a distance of 25 metres. “With all the shooting we did, the Sig was averaging about 72 millimetres, so it was very tight,” said Hall. A properly set-up Hi-Power could yield similar results, he acknowledged, “but the problem was you would get stoppages and you wouldn’t get as many rounds through it.”

There are still approximately 11,600 functional Hi-Powers on DND’s books, but most are slated for smelting and for museums or military displays.