Realistic effects: Advancing the next generation of weapons simulation 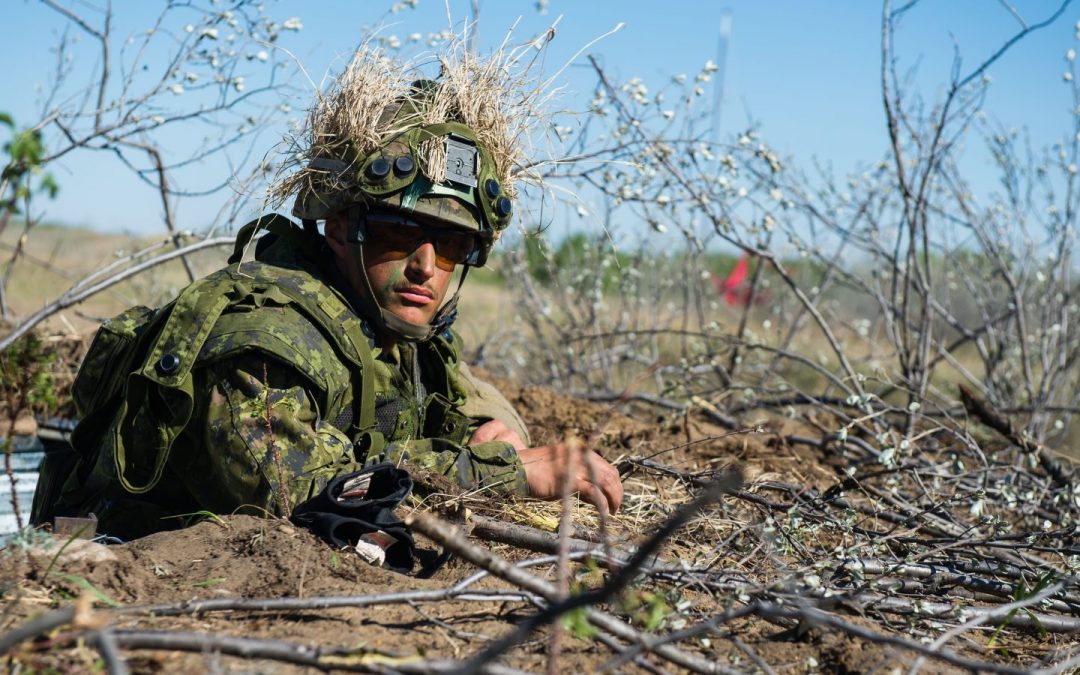 Some 1,600 years ago, when much of Europe was embroiled in conflict, a Roman scholar, Publius Flavius Vegetius Renatus, wrote a treatise on military matters. In it, he counselled: “igitur qui desiderat pacem, preparet bellum,” which translates as “therefore he who desires peace, let him prepare war.” His words have since been pared down to a more familiar “si vis pacem, para bellum” or “if you want peace, prepare for war.”

The underlying philosophy is that rigorous training is a key to winning wars and it has been central to the Canadian Army’s acknowledged effectiveness in many theatres of combat. It could be argued that training fundamentals essentially haven’t changed much over the last century, but a Directorate of Land Requirements (DLR) project is expected to take the syllabus to a much more realistic level without actually putting personnel and hardware in harm’s way.

A key commitment in the government’s 2017 defence policy, Strong, Secure, Engaged, the Weapons Effects Simulation Midlife Upgrade (WES MU) is more about replacing and extending systems than simply upgrading them, said Major Michel Beauchemin, the project director in a new Training and Simulation section within the DLR. Stood up as DLR 8 in January 2020, it used to be part of DLR 4, a diverse and arguably stretched section that also was tasked with managing an array of increasingly complex Electronic Warfare and C4ISR projects.

Beauchemin, on the job since October 2018 and having used WES in the field as an infantry officer, told Canadian Army Today that with about five personnel – all on one floor of a building in Gatineau, Que., along with their civilian section head, Marie Labelle – the small section is free to focus more effectively on simulation. The end game is not only better results for the Army itself, but also improved interaction with Royal Canadian Air Force tactical platforms and potentially the Royal Canadian Navy, as well as with the Australian, British, New Zealand and U.S. armies in multinational exercises.

The need for an overhaul was identified by the Department of National Defence in 2014 and the current project, costed between $250 million and $499 million, now is in the options analysis phase. DLR 8 is drafting a Preliminary Statement of Requirements expected to be released to industry by Public Services and Procurement Canada in the spring. That would generate feedback during the summer and fall, setting the stage for further refinements, leading to a preferred option by October 2021. WES MU is expected to reach the definition phase in the 2023-2024 fiscal year, with deliveries of equipment and software starting in 2027.

Enough gear to equip in excess of 3,000 troops is the goal, including those in combat arms, combat support elements such as signals, some force protection command posts, and personnel involved in logistics close to the front – “those more likely to engage with the enemy,” as Beauchemin put it.

The project also would see installations on one aircraft, possibly an unmanned system, as well as on armoured and other vehicles, mobile weapons platforms and add a mobile container-based control suite.

“The Army trains in Wainwright at the brigade level, so instead of concentrating instrumentation at one battle group, the Army chose to distribute instrumentation according to the likelihood of those elements engaging the enemy – mainly the combat arms but some others too,” he said. “The intent of WES MU is to be able to instrument not necessarily a full brigade group, but enough to enable commanders to assess the conduct of operations during the exercise and the training objectives.” 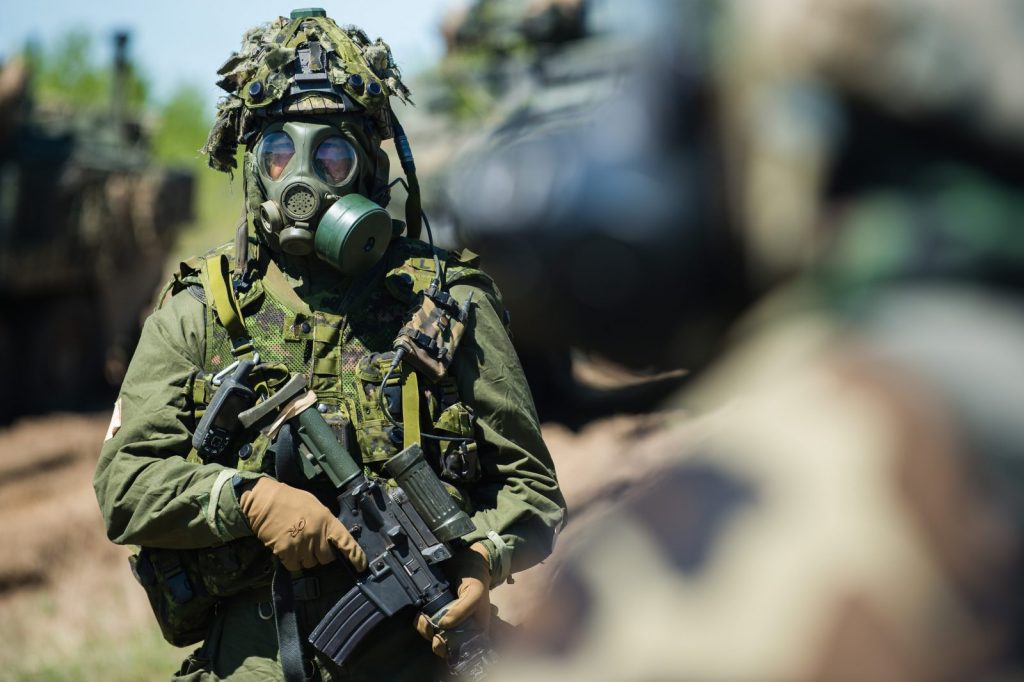 For the dismounts in a WES environment, Beauchemin said “the whole point is to enable kinetic engagement” so that the system, using safe Class 1 lasers and sensors, can determine not only whether a trooper has been hit, missed or had a near-miss, but also whether return fire has been successful against the opposing force in training scenarios.

He expects that as the main “weapon” in the current and proposed WES packages, lasers will remain the central technology for the foreseeable future, certainly as long as it takes for the new one to enter service. Some non-laser technology in the wings involves precision inertial measurement units. If that eventually bears fruit, it would mean users no longer would be affected by smoke, foliage, snow, mud splatter, humidity or line of sight – all of which can undermine a laser and can affect the level of confidence in the system’s accuracy.

The kill-no kill sensors on the torso, shoulders and head contribute significantly to the training reality. “If you’re in an urban environment and only your head is sticking out, you shouldn’t get hit in the leg,” Beauchemin explained. But what happens when there are two vehicles in close proximity to each other and you only want to attack one? “With 7.62 or 5.56 ammunition, you only hit one target at a time.” However, something like a shoulder-fired missile or a mortar round could affect more than one vehicle and shrapnel would cause casualties among dismounts in or near a LAV hit by a tank round.

“There’s a clear difference between using blanks, simunition or WES. You don’t want to become a casualty but now you can become one really quickly when you have fire laid on you from a machine gun. I’ve seen it; people go down very fast but this is exactly what you want during training.” If all goes according to plan, it makes for a better soldier. “Exactly! The whole point is to test what you’ve planned and the execution, what went wrong and what went well.”

Compared with the traditional reliance on umpires to adjudicate training exercises, WES enables “high-fidelity” engagements in which results are indisputable. While dismounts fire blanks for effect with their lasers recording the result, large weapons rely on sound or lights for effect. In the case of artillery, it emulates the weapon’s ballistics table for range and bearing, accounting for time of flight and which areas are hit.

“As long as you keep it more or less seamless to the user … you’re meeting the training requirements and you’re still ensuring confidence in the system,” said Beauchemin. “Also, the effects of it are not physics-based; they’re statistics-based.” It’s effectively algorithm-driven modelling of a trajectory and what he said is “a matter of computing power and latency of the transfer of information on the system’s radio communication network.”

For example, he’d like to see designs that improve the capabilities of gunners in the Army’s fleet of light armoured vehicles. The legacy WES system relies on available light, but thermal imaging and night-vision simulation would be welcome, as would the ability to simulate smoke or other factors which compromise shots, especially at moving targets in a built-up area.

“We want to challenge the individual’s skills within a collective tactical training environment. Engaging a target on a range is one thing. Doing it while bouncing in a LAV and engaging a moving target with simulation and feedback is the next step. The whole point is to be able to bring this gunner or those soldiers to a higher degree of operational readiness than we’ve managed to do before. Within collective training, there’s always an aspect of individual training. But as you go up, it takes less priority at the brigade level, where it’s mostly about decision-making.”

And what about more commonality with allies? “There are definite technical challenges, not so much in terms of training because we train more or less the same,” he replied. “For quite a long time, our systems have been developed according to national requirements, they’re not meant to be interoperable. In the past, one option was to lend equipment to the British or Americans who come to train here as long as we can design a bracket for their vehicles, but the intent now is for them to bring their own operational equipment and instrumentation to train with us.”

Those national standards are a long-standing issue with NATO overall and while an Urban Combat Advanced Training Technology (UCATT) working group is trying to design a standard interface, Beauchemin expects it will be “some time” to develop a critical mass of interface standards before there’s a practicable solution. That said, some vendors are positioning to be compliant.

Unlike training using virtual reality, troops using the WES system are out in all kinds of weather and are dealing with fatigue, equipment and logistics, and other issues which can compromise the entire exercise. And dismounts can, as they do in the real world, run out of ammunition.

“The point is not to be able to train at such a high level that it’s just short of combat operations – we’ll probably never reach that,” Beauchemin stressed. Rather, the Army strives to leverage the latest technology developments to encompass a lot more weapons effects, at a much higher level of fidelity.