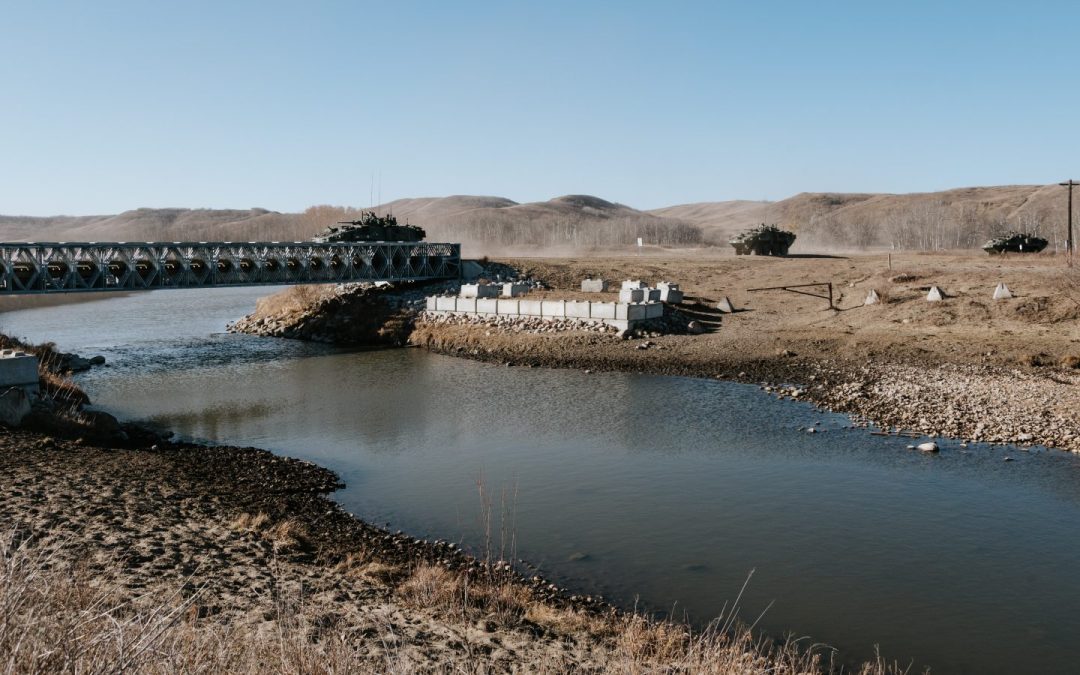 For modern mechanized militaries, mobility is critical. In Field Manual 3-90.2 The Tank and Mechanized Infantry Battalion Task Force, nearly a fifth of the pages of the main body of this document mention the word ‘mobility’. That is 365 times in a 600-page document! It states that “[a]t the tactical level, superior mobility is critical to the success of the force. Mobility facilitates the momentum and freedom of movement and maneuver of forces by reducing or negating the effects of existing or reinforcing obstacles.”

A key component to maintaining mobility in a theatre of operations is viability of the existing road network to facilitate rapid movement of heavier military vehicles. In many cases, bridges will likely be the limiting factor when considering routing options available for these assets.

Now, consider the real possibility of needing to hastily deploy to a new theatre of operations which may contain thousands of bridges. Can these bridges support 60-ton tanks and 120-ton transporters? Perhaps. However, approaching this problem using traditional analytical methods, calculating the capacity of structural components, is a task that requires several hours for each bridge, often requiring as-built drawings or onsite reconnaissance. By any account, this traditional approach can be an overwhelming task in preparation for a hasty deployment. Given that drawings might not be readily available and an initial assessment would need to be done remotely as assets are enroute to the area of operations, there is a risk that the operation will begin before an initial assessment is complete.

However, bypassing this assessment comes with the risk of damaging bridges to the point of no longer being viable for subsequent movement, resulting in unexpected delays, additional engineering tasks which early in a deployment are being triaged, and in the most extreme situations, a potential loss of personnel and equipment.

The spectrum of information available on bridge structures may prompt responses from military engineering planners that vary from, “I have a bridge in a particular country and don’t know anything else about it,” to, “I have a full set of bridge drawings and have observed a five-axle heavy-lift crane cross it.” Unsurprisingly, military doctrine provides various expedient bridge assessment methods which military engineers can utilize to perform rapid assessments with varying quality of data.

To support the tremendous challenge of rapidly assessing many bridges with data of varying quality, the Department of National Defence has been developing rapid bridge evaluation software to bring all these expedient methods together into a single tool, which allows for greater versatility in approach and facilitates a comparison of results from different methods.

The vision for this software is three-fold: (1) to provide the best possible bridge capacity estimate based on initially available data; (2) be accessible and useful for military personnel without any specific experience in bridges and to highly experienced bridge engineers; and (3) to facilitate the revision of bridge capacity estimates as new data become available. The software is designed with a “wizard” interface, quickly guiding a user of any level of expertise to enter critical information as it becomes available. The software carries out required calculations, incorporates appropriate assumptions or database information based on user selections and provides relevant solutions and reports. 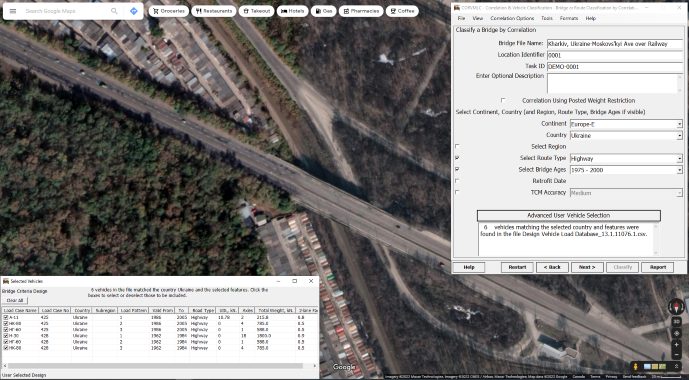 Example bridge in Kharkiv, Ukraine using CORVMLC to look up design load used at time of construction for bridge. This software has a database of over 900 design loads from over 40 countries that can be used to estimate the MLC of bridges. Image: Google Earth Engine.

The rapid bridge evaluation software defines bridges and vehicles in terms of a Military Load Classification (MLC) following NATO standards, where if the MLC of a vehicle is less than the MLC rating of a bridge, it can be permitted to cross. The methods used to conduct rapid military bridge evaluation can broadly be delineated into two categories, correlation methods and analytical methods, both which are handled by the software suite.

Supported by the Correlation Vehicle MLC (CORVMLC) module, correlation methods are a proof-of-use approach to determine the capacity of a bridge to carry loads, where if a certain size vehicle can cross a bridge, the user can infer the MLC of the bridge. Because military vehicles generally are heavier than street legal civilian vehicles of the same length, simply comparing the gross vehicle weight will oftentimes overestimate the bridge MLC, so a comparison of the load effects using the software is required even with posted load restrictions. Observed traffic on a bridge, whether with eyes-on-site or imagery from military reconnaissance or publicly available data like Google Street View, can be used to estimate the MLC of a bridge using the software silhouette interface.

If information is known about bridge engineering design standards in the country, the design loads used for the age of bridge and type of highway can also be used to correlate an MLC for a bridge. For the recent floods in British Columbia in November 2021, with the assistance of other tools to automate processing bridge data from the Ministry of Transportation, CORVMLC was used to estimate the MLC of over 3,000 bridges in the province in less than two days for use by the Canadian Armed Forces (CAF) for operational planning. Subsequent checking of the results found that CORVMLC performed very well in providing good estimates for bridge MLC.

A preliminary assessment of bridge capacities using correlation methods provides an approach to prioritize and plan more resource-intensive on-site assessments where analytical methods may be suitable. Analytical methods use a more traditional method of determining the MLC of a bridge by estimating the capacity of key load-carrying components.

The software suite has two modules that utilize analytical methods. The Rapid Field Bridge MLC (RFBMLC) module estimates the MLC of common bridge types based on a limited number of key measurements which can be quickly determined on site without special equipment. The RFBMLC module is especially relevant for a non-expert user, guiding the assessment by identifying relevant data to collect and making reasonable engineering assumptions for the user such as material properties. The second module, Codified Analytical Bridge MLC (CABMLC), facilitates code-prescribed analysis of primary load-carrying elements of the bridge with full knowledge of material properties and component geometry, which is more applicable if as-built drawings are available.

The software facilitates a cross comparison of the results of the different methods as a confirmation of the estimated MLC of the bridge. The estimate of bridge MLC can be updated as more information becomes available, such as access to bridge drawings, further observation of traffic, or field measurements taken during on-site assessments.

Furthermore, the software can be used to determine the MLC of vehicles using the NATO Analytical Vehicle MLC (NAVMLC) module. Given the inherent conservatism in the NATO MLC system, the benefit of storing the vehicle MLCs in the software is that a “Go/No-Go” analysis can be conducted for a specific vehicle or grouping of vehicles for several bridges to determine viable routes. If the loading effects of the vehicle are less than the bridge capacity, then a “Go” is designated and the vehicle may traverse the bridge. Otherwise, a “No-Go” situation exists and alternate routes or additional special crossing conditions are applied for the vehicle. Special defined military crossing conditions as defined by NATO include “Caution” crossing where a bridge centreline crossing at reduced speed occurs and a “Risk” crossing where bridge behaviour is closely assessed and monitored during the traverse. These crossings can also be assessed and managed with the software.

The main benefit of consolidating rapid military bridge evaluation techniques into a single software suite is that this becomes an integrated tool to not only provide a repository of up-to-date bridge MLC capacities, but to also plan and prioritize engineer reconnaissance. The software not only provides a preliminary “best guess” estimate for the MLC of a bridge using minimal data; it facilitates more accurate updated capacities as full structural details are known and evaluated.

Early in an operation, this tool can be used in pre-deployment planning using remote data collection, to shape the mobility options available to a task force on the ground and prioritize where detailed assessments may be necessary. Conversely, this tool can be used to determine for an opposition force which route options might be available without the need of major engineering operations if details on their military equipment loads are reasonably well known. Later in the operation, as key bridges are identified, estimates for MLC can be refined through on-site data collection or obtaining access to engineer records for the bridge structure.

Although pioneering work on the software started more than two decades ago, interest in the software’s capability has rapidly gained momentum since 2014. At present, this software is used by the CAF, internationally by allies, and is the NATO Military Engineering Centre of Excellence recommended software for rapid military bridge evaluation. Based on recent experiences, including the CAF deployment to British Columbia after the November 2021 flooding, and in consultation with NATO allies, additional features expanding the functionality and usefulness of the MLC suite are currently being integrated into the software. This process includes research and doctrine development to improve the suitability of the MLC system, which is a key component of NATO interoperability.

Andrew MacDonald and Gordon Wight are members of the NATO Team of Experts in Military Bridge Assessment, who have worked closely in the development of the Canadian rapid bridge evaluation software briefly outlined in this article. Both are former military engineers with the Canadian Armed Forces; Mr. MacDonald is currently a defence scientist with the Center for Operational Research and Analysis within Defence Research and Development Canada and Dr. Wight is currently a professor with the Department of Civil Engineering at the Royal Military College of Canada.