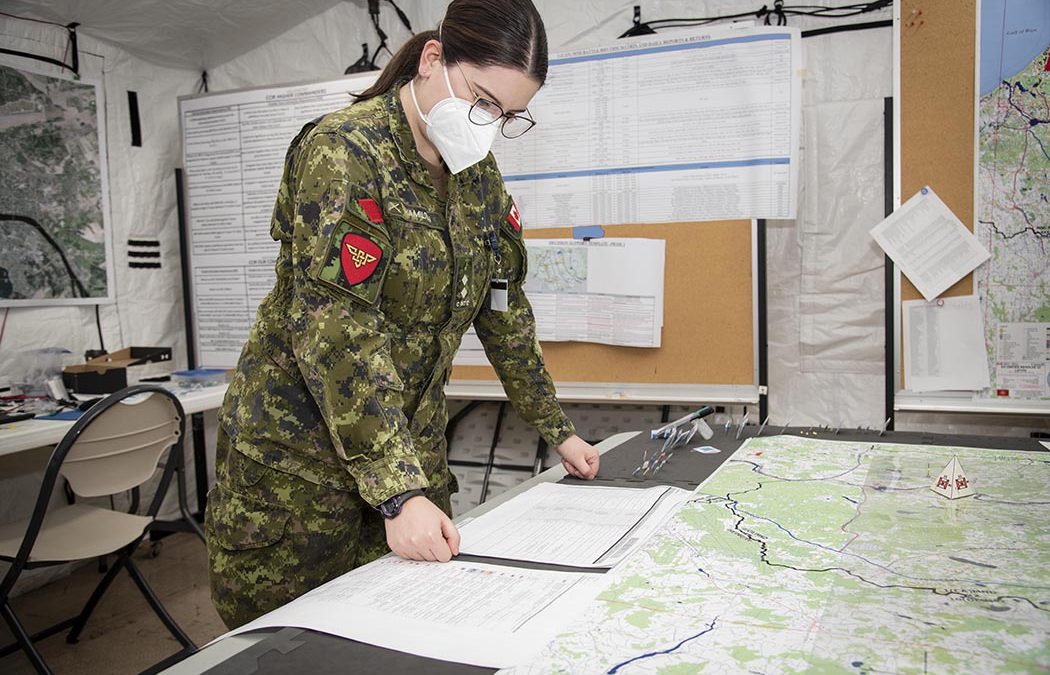 When the headquarters staff of 2 Canadian Mechanized Brigade Group (2 CMBG) participated in Exercise Unified Resolve 2021, their first actions as a flanking brigade to 1 CBMG, the primary training audience, were a relief-in-place of local forces followed by a major river crossing in enemy territory.

“We were right on the offensive,” recalled Colonel Eric Landry, commander of 2 CMBG. “This year was very different.”

Unified Resolve is the Army’s largest computer-assisted training event and often serves as a validation of the brigade headquarters and the command staff of key subunits on the brigade’s build year to high readiness for contingency operations.

In previous years, the exercise has played out over a battlefield among fictitious countries set in the Caucasus Region, supporting an ally against a near-peer enemy in a complicated battlespace involving insurgent activity and criminal organizations.

The shift from the Caucasus to a training scenario set along Europe’s eastern borders meant a decidedly more defensive focus, with operations centred on defending a NATO ally from a foreign invader. When Unified Resolve 22 (UR22) began on Jan. 24, rather than advancing an attack as in previous exercises, the brigade was holding ground near the border of a NATO partner, facing an autocratic neighboring state, Donovia, planning an incursion as soon as a 150-day ceasefire ended.

“When that ceasefire ended, they crossed into NATO territory. We did what we call a mobile defence, conceding a little bit of ground to the enemy in order to destroy it and then go back on the offensive to re-establish the international border,” Landry explained.

“The tactical plan from the Corps level was to make the enemy believe that we had a hard defensive line right on that ceasefire line,” a deception to give the impression of success as Donovian forces penetrated over the border. “What we wanted to do was lure the enemy in to achieve an easier destruction.”

The change in the scenario and the initial response reinforced some hard-learned lessons and introduced a few new ones.

For the first time, the brigade was provided a simulated British Army divisional reconnaissance battle group, but when the fighting reignited after the ceasefire, “they did not have enough space between the ceasefire line and our main defence to really identify where the enemy’s main push was,” Landry said. The result was heavy casualties and an enemy force that very quickly came in close contact with the brigade. “It was a tactical lesson learned: If you are going to use ground reconnaissance troops, they need space to manoeuvre and they didn’t have that.” By not integrating the division reconnaissance “in an optimal manner … [it] had an impact on the conduct of the operation.”

UR22 continued to emphasize the importance of using non-kinetic capabilities in a complex battlespace. Failure to think about and employ civil-military cooperation (CIMIC), psychological operations (PSYOPS), information operations, and public affairs officers quickly had an impact on how local populations, refugees and the Canadian public responded to the brigade’s actions.

Landry noted the deliberate working groups and training that goes into generating kinetic effects such as fires, and suggested more work remains on how best to use non-kinetic effects. “They shape the battlespace almost as much as artillery,” he said.

“We had to use our own assets to move civilians during the exercise,” so synchronizing the effects of CIMIC and PSYOPS with combat support, rear area security, and the manoeuvre unit was critical to ensuring “they were all conveying the same message to the civilian population” and coordinating their actions.

Many of the injects thrown at the brigade remained the same, including engaging with non-governmental organizations like the Red Cross and with local religious leaders, as well as responding to a barrage of cyber threats and information operations. But it was the subordinate commanders and staff of 2 Combat Engineer Regiment, 2 Service Battalion and the 2nd Regiment of the Royal Horse Artillery that “were challenged the most during the exercise,” he said.

UR22 also saw the ongoing experimentation with a new model for integrating the enablers of the Canadian Combat Support Brigade (CCSB). Rather than each unit of CCSB arriving with its own command team, CCSB began trialing a concept last year known as the Combat Support Group (CSG) to provide the manoeuvre brigade commander with a single point of contact to plan and generate the effects of sensors such as small remotely piloted aircraft, medium range radars, electronic warfare and, most importantly for Landry, “a lot of intelligence assets.”

“Integrating the CSG into the brigade played a big role in me knowing where the enemy was, what it was doing, and what were its intentions,” he explained. “It became a big part of the brigade fight and a key enabler to achieving our mission.”

The CSG concept is still being refined, so Landry took the opportunity to test an idea by providing the CSG with a light cavalry squadron for part of the operation. “Most of their sensors are not ground based, so for them to have ground sensors helped plug gaps when they were trying to paint the enemy picture as a whole.”

Adding to the realism of the exercise, 1st Canadian Division Headquarters played a more direct role as a multinational division command, meaning Landry reported to Major-General Mark Misener, commander of 1st Can Div, rather than a partially simulated command. “When I debriefed my boss, it was a real general who had his own concerns and for whom I was not always the main effort,” he said. That forced him to think through how his plans aligned with the other formations in the division. His frequent phone conversations with flanking brigade commanders and the division commander “added a lot to the kind of pressure I would feel for pushing information upwards. I think it was far more realistic.”

As part of the NATO context, the exercise included a Latvian mechanized brigade, the U.S. Army 2nd Stryker Brigade Combat Team from the 7th Infantry Division, and reconnaissance forces from the British Household Cavalry, all of which were present in the divisional headquarters. “International collaboration brings its share of friction, so practicing this when no lives are at risk is always a good idea,” Landry added. 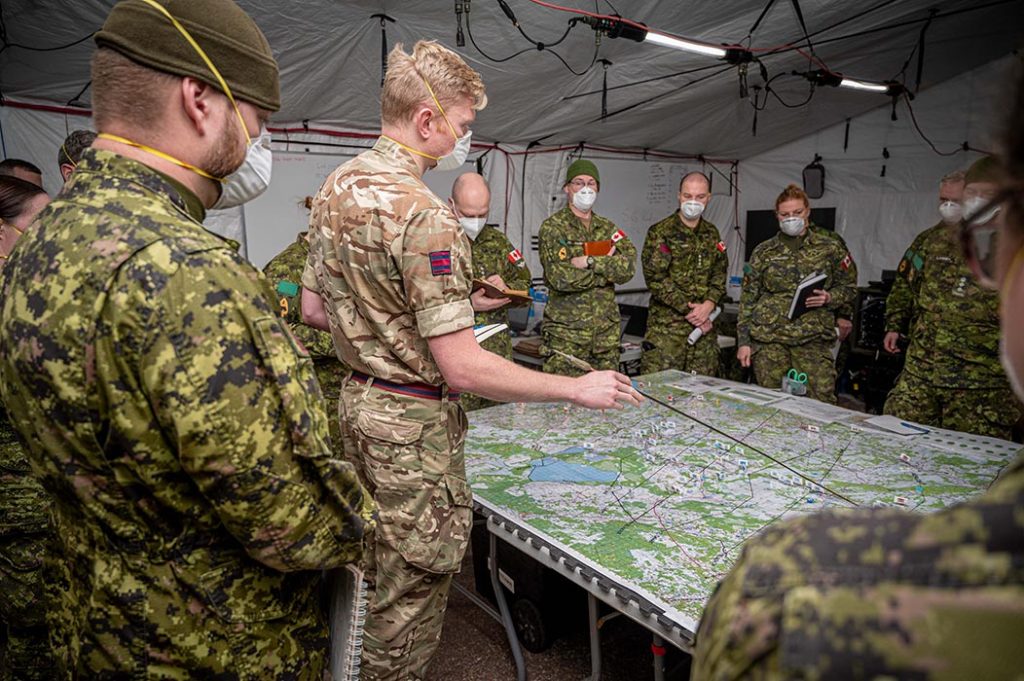 TAKING IT TO THE FIELD

Much like in 2021, Unified Resolve was downsized to respect local health authority concerns about a rise in the number of Covid-19 cases caused by the Omicron variant. CMTC originally planned for about 1,500 participants but reduced that to around 900 at three locations in Petawawa and Kingston, Ont., and Edmonton, Alta. Most participants had three vaccine shots and rapid tests were conducted every second day over the eight days of the exercise. Soldiers also wore N95 masks throughout. Just two asymptomatic cases were detected.

Normally a 24/7 training event, UR22 was scaled back to 10 hours per day (in 2021 it was 12) to reduce the number of soldiers and contracted support. “I got what I needed to get out of it,” Landry affirmed. “You can double shift, day and night, but the key people are still the key people. And I certainly appreciated not being woken up at 0200 to be told a Chinook [helicopter] had crashed.”

The manoeuvre units worked with the equivalent of tactical forward command post staff, but the three subunits being validated had their full headquarters.

With members of the 3rd Battalion, The Royal Canadian Regiment (3 RCR) conducting training at the Joint Readiness Training Center in Fort Polk, Louisiana, Landry integrated Reserve members from across 4th Canadian Division to form an infantry battalion. 4 RCR, as it was called, conducted rear-area security, flank security and other tasks “that I normally could have given to 3 RCR,” he explained. “It reinforced the One Army concept, and it gave these Reservists good exposure on what the Regular Force brigade and division have to deal with when they train at Level 7.”

As 2 CMBG prepares for exercises Maple Resolve and Intrepid Bear, a combined arms live fire event later this spring, Landry is planning to take ideas that worked well in a simulated environment and trial them in the field. On UR22, he employed the Royal Canadian Dragoons as a cavalry regiment, expanding their normal footprint of two light (wheeled) squadrons and a heavy (tank) squadron to three heavy squadrons and one light squadron.

“They were used in a manner to counterbalance what the rest of the brigade was doing,” he said. Major events like the demonstration at the ceasefire line, then a rearward passage of line, followed by a counterattack, consumed “a lot of my fire power and resources,” including “most of my planning assets and most of my enablers,” all of which needed to be reconsolidated and built back to combat strength.

“During these lows where the enemy can regain the initiative, I used the Dragoons as a counterforce. When most of the brigade was doing a main event, they were in a more defensive posture; when most of the brigade was consolidating, they did something very offensive to keep the enemy thinking and on its toes while we were trying to build back our combat power. That concept worked very well.”

During the first defensive manoeuvre following the end of the ceasefire, the Dragoons gave him some flexibility to respond to the initial assault on his division reconnaissance battle group. “It was a different way to fight the brigade, but I’m happy with what was accomplished. It’s certainly a concept that I will keep using during Maple Resolve and some of the other follow-on field training exercises. It’s good to see icons do it, now I really want to do this with vehicles on the ground. For this exercise, it was a cavalry force, but it could have been 3 RCR used in an air mobile role. The idea is to always have the enemy thinking about something else.” 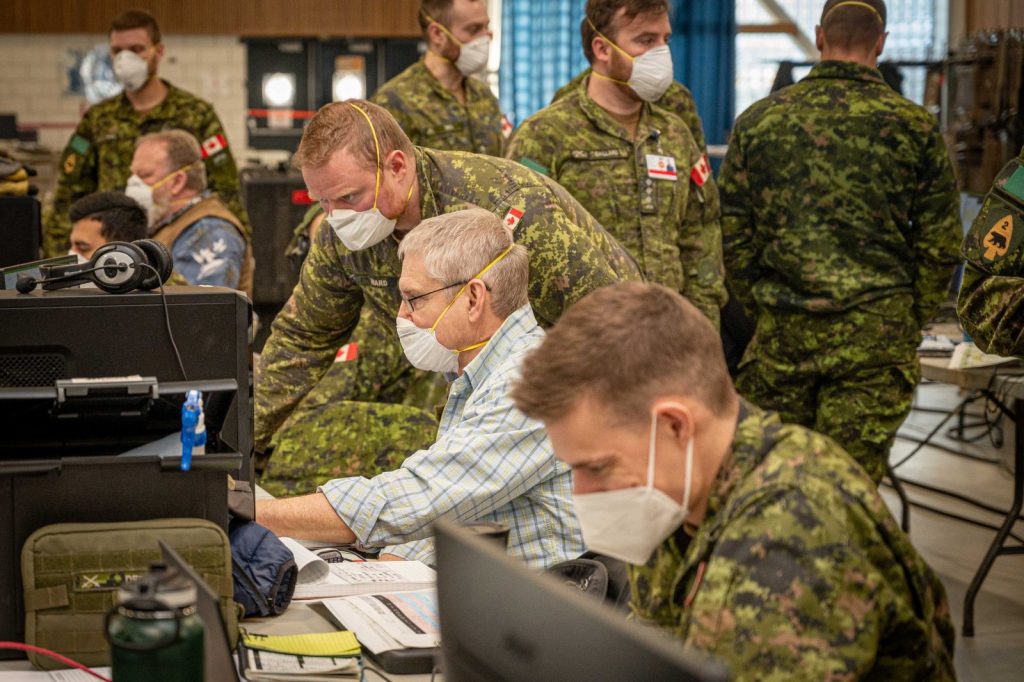