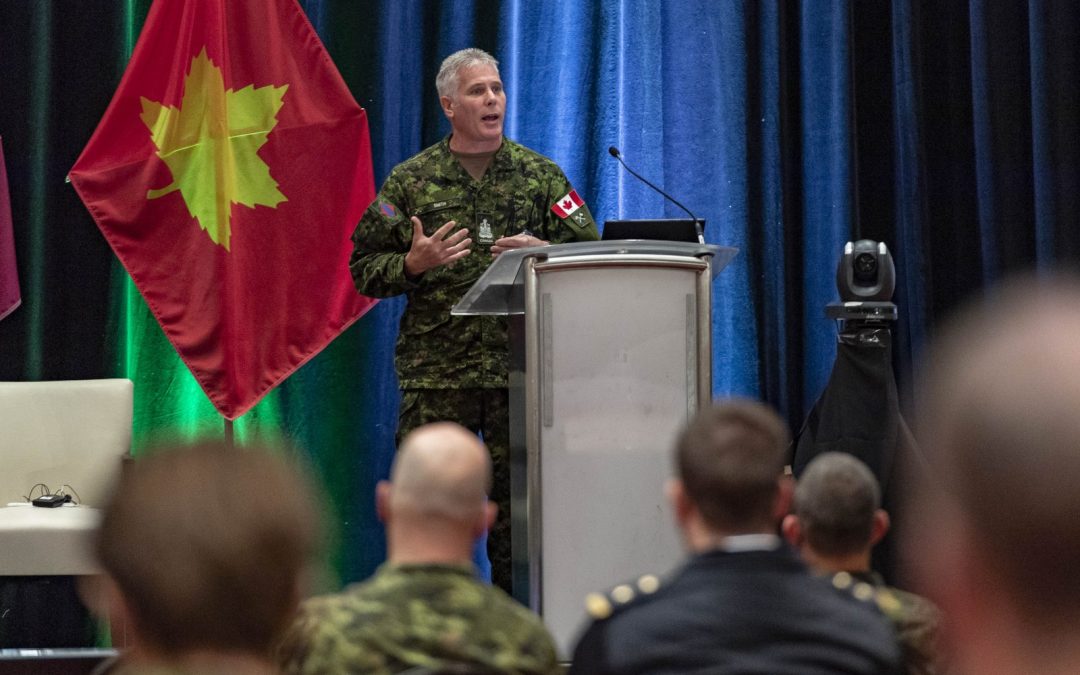 The “been there, done that” concept can be a key to promotion in any military force, but there’s obviously much more to the climb up the rank ladder, particularly when the force in question is struggling to reinvent itself. Enter Chief Warrant Officer (CWO) James Smith, the Canadian Army’s senior non-commissioned member, a key bridge between the senior level leadership and its soldiers. He sees himself as a “conduit” as the Army seeks to modernize and evolve culturally.

Born in Halifax and “raised a fisherman’s son” on Nova Scotia’s south shore, Smith enrolled in the Army in May 1990 as an infanteer with the Princess Patricia’s Canadian Light Infantry (PPCLI). After basic training in nearby Canadian Forces Base Cornwallis and then basic infantry training at CFB Wainwright, Alta., he was posted to Winnipeg with the 2nd Battalion, PPCLI.

Three decades of service has seen him steadily climb through the ranks in a regimental system that has also permitted him additional institutional experiences. He values the Army’s Command team relationship, primarily dedicated with the Commanding Officer, but now with the Deputy Commander in certain aspects of Army governance – a dual role he says is “unique” in army command structures generally. Smith was promoted to the job last June for what is usually a three-year assignment to a desk just a few metres away from the offices of the Commander of the Canadian Army, Major-General Michel-Henri St-Louis, and the Deputy Commander, Major-General Gen Conrad Mialkowski, both appointed last April.

As for the “been there, done that” record which has led him to National Defence Headquarters, Smith mentioned it almost in passing during an interview with Canadian Army Today. It includes six operational deployments, most notably to the Balkans: to Croatia in 1993 and then Bosnia initially in 1997, and then as a junior leader in 2000 and as Section Commander in 2003, an experience he recalls vividly because of the way it affected families. “It was tough to see.”

Afghanistan followed in 2009 with Task Force 3-09 out of Kandahar in the latter stages of the Canadian Armed Forces’ (CAF) combat mission. His last overseas deployment was to Ukraine in 2017 as Task Force Sergeant Major with Operation Unifier, the CAF training and capacity-building mission, a key element of Canada’s bilateral support for Ukraine in the face of Russian aggression which continues to this day with no sign of let-up.

Looking back on this operational whirlwind, Smith recalled finishing high school “at a time when fishing wasn’t very good” and there were limited prospects other than seasonal lobstering. Situated between Shelburne and Barrington Passage, his hometown “was a really small community, even less so today,” but he still maintains roots there through his family and friends.

However, soon after Cornwallis, never having been further west than Saint John, N.B., he found himself packed off to Wainwright, the main training base for 1 Canadian Mechanized Brigade Group. Home to a couple dozen weapons ranges scattered around its 609 square kilometres, it sits near the Saskatchewan border in the appropriately named Battle River region where Cree and Blackfoot used to dispute territory.

Wainwright’s immersion was “a blessing in disguise” for Smith in the way it expanded his personal horizons and launched him on an Army career. 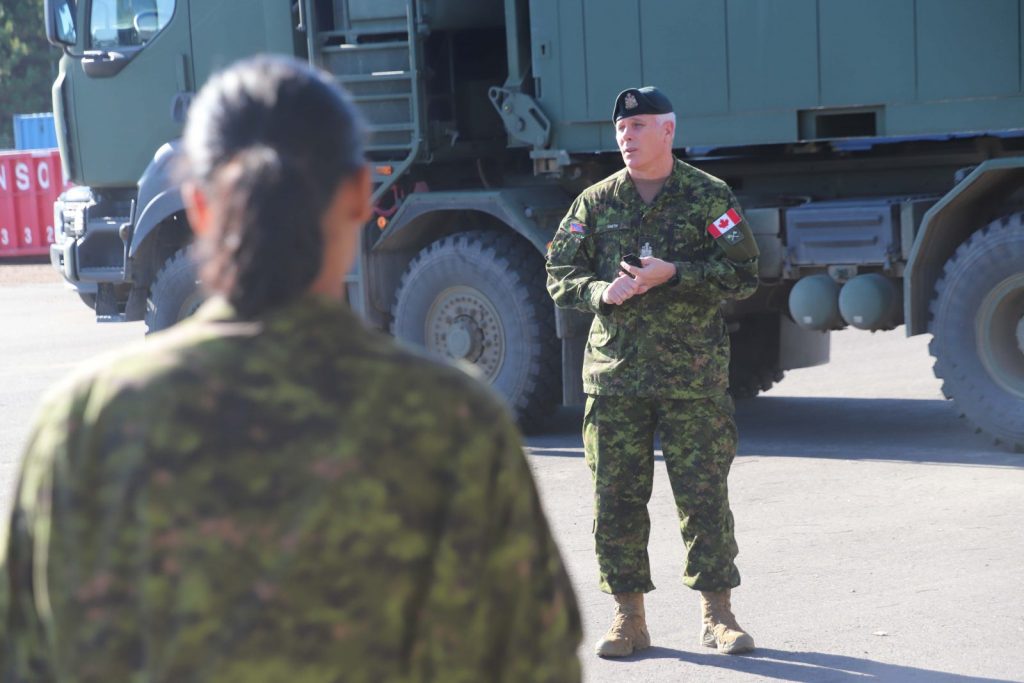 He considers his current job – potentially his last before retirement – a “privileged” position in how it gives him a voice in the Army’s future. “We continue to lead, coach and mentor our replacements and, in doing so, will enable them to do the job just as well, if not better. We need to privilege the future and in doing so, be ‘approachable’, which historically has not always been the case.”

He has been fortunate to serve with some great officers and senior NCOs. “Our officers are excellent leaders, but they have different responsibilities than a senior NCO. Senior NCOs, as the backbone of the Army, must be approachable. They are critical to ensure our soldiers excel in operations and uphold our values within the profession of arms – more so today as the CAF faces growing societal challenges due to shifting demographics within the Canadian mosaic.”

Asked how soldiers today respond to something they don’t like, Smith noted that many “come into the Army with a variety of life experiences and styles. We must encourage them to adopt the profession of arms way of life and empower them to be more included. When I joined the CAF, my goal was to come out with a pension. Today, some arrive with a different focus and with different experiences. We need to leverage their experiences in order to remain relevant in our approach to training. In my time, we learned by utilizing memorization and learning techniques such as, ‘explain, demonstrate, imitate’. With the advancement of technology, they bring a different learning dynamic to the CAF simply because there’s lots more information accessible to them.”

That led to an exchange about Army succession planning and the potential “elitism” among those who have combat arms in their resume. Do they have an advantage when it comes to promotion? “No, but there is a perception as you progress that there’s a bit of favouritism. At the tactical level, there are advancement scenarios to become unit CWOs or Regimental Sergeants-Major (RSMs), but in terms of ‘working at the coal face’, there is equal opportunity for all trades to progress within the Army.”

The Army has a nomination-selection process, typically held twice a year, with additional voting requirements as the situation evolves. The process is managed by the Army talent management team, and it plans, coordinates and communicates with all the Branches, Corps and Regimental directors the call of nominations for all planned and unplanned position openings.

“They will collate the nominations in consultation with the Deputy Commander and I and send those to the selection board members for a vote,” said Smith. “To avoid any perceived favoritism, the entirety of the board will submit their votes independently. There is a nomination process for the next selection of positions going on right now, which includes 15 brigadier-generals voting for the next tranche of senior and tactical level leaders. When the board comes together as one, we show who’s voted for whom; there is no secret ballot.”

If there’s any sign of favouritism, the Deputy Commander will challenge the voting members and discuss, and revote as necessary before a primary and alternate selection is decided upon. These selections are then ratified by the Commander as the final authority for Army succession planning.

“The outcome of the selection process is communicated by the chain of command,” which plays an important role to ensure the member accepts the appointment and to verify that there are no personal or professional concerns the Army needs to be aware of prior to announcing the selected member’s position, said Smith. “The Army relies on all levels of leadership to communicate with their soldiers – we need to encourage that.” 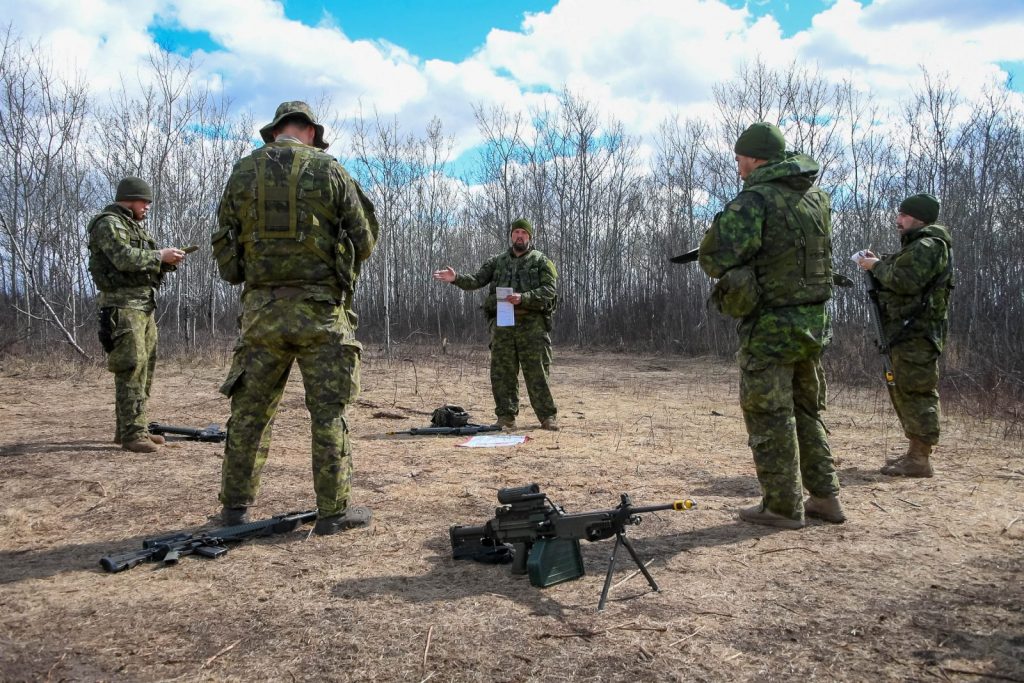 MCpl Chris Parent, 1 Service Battalion (center) presents orders to his team for a road move to a distribution point during Exercise Maple Resolve 2021 in May. Photo: Cpl Doug Burke

Another part of his job is working with all the Army’s CWOs, lately through a combination of virtual and in-person sessions. “Recently, I had about 190 online and in the room. I talked about humility and humanity, about soldier morale, health and welfare, resiliency and family support.”

The latter continues to be an increasingly important element of the Army’s cultural evolution. “My concern is that soldiers need to have an active, agile family care plan,” Smith said, drawing on his own experiences. “That allows our soldiers to do their force generation tasks that are required of them.”

That force generation, other than strictly military assignments, rose to the occasion in Canada’s civilian world as Covid-19 waves surged across the country, hitting seniors’ long-term care homes particularly hard. The CAF’s ability to assign doctors, nurses and other personnel to the crisis clearly has done a lot for the military’s public profile.

“Canadians appreciate what we do,” Smith agreed. “When you empower your soldiers, when you trust your soldiers, they trust you. But we need to work as an integrated team, which includes our part-time and full-time Reservists, our Canadian Rangers, and our civilian teammates. Our people are our number one capability, we need to be well-trained, agile and ready for whatever our country requires of us.”

Though not without its challenges, “we are a very capable Army and, as we demonstrated most recently during the pandemic, we strive to be the best that we can in any capacity. I don’t think we give ourselves enough credit.” 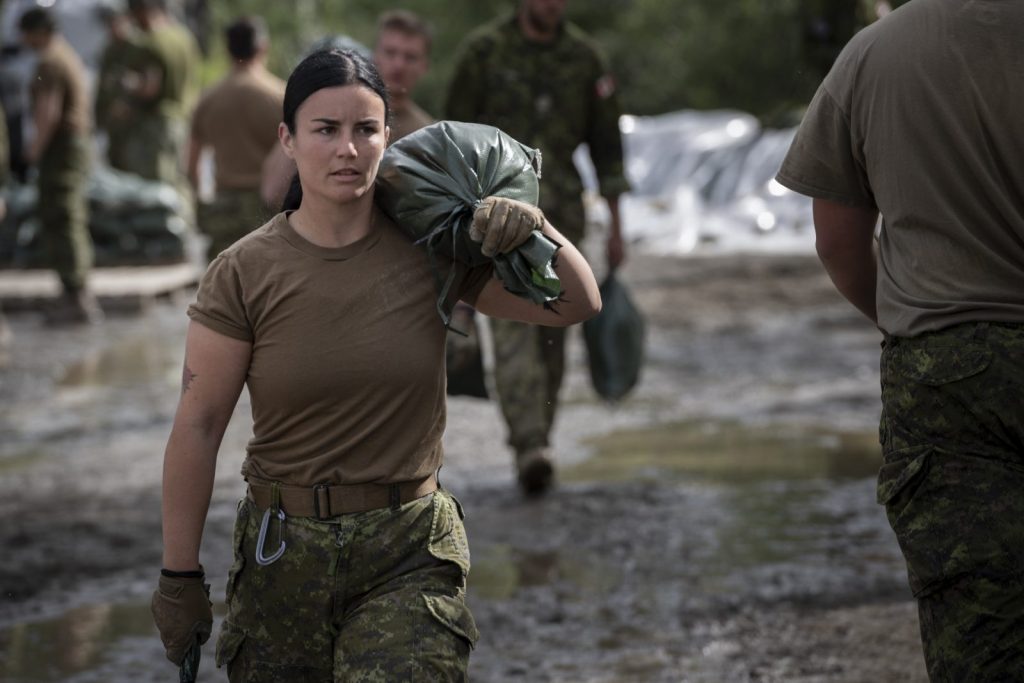 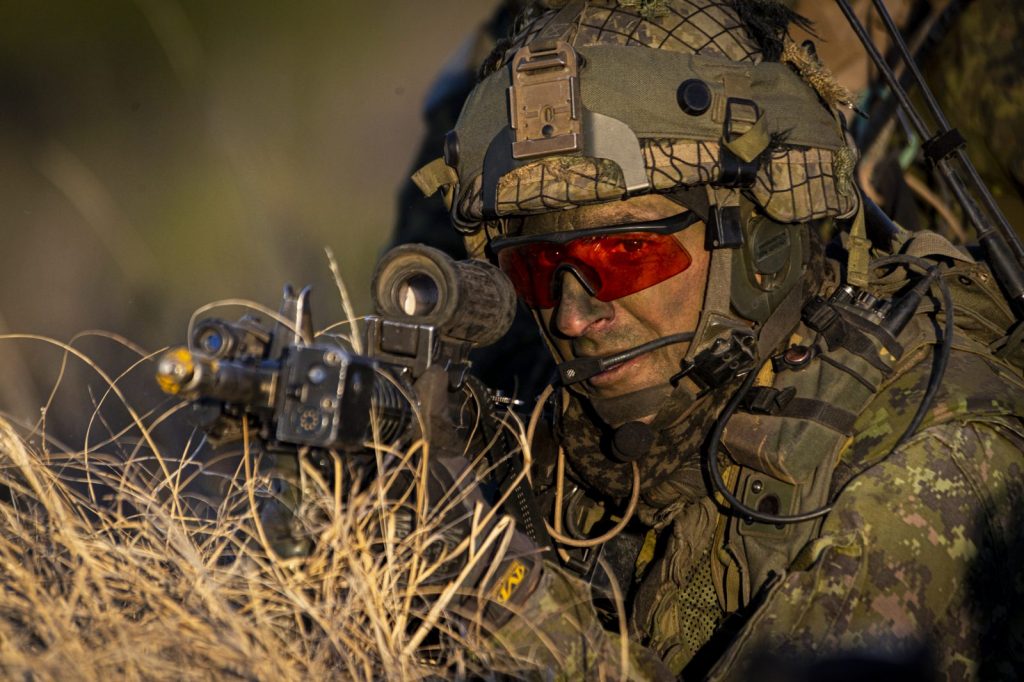 A section commander of 1st Battalion, Princess Patricia’s Canadian Light infantry, as part of a coalition force, watches from the hill top as other members of his unit attack the enemy position during Ex Maple Resolve in Wainwright, Alberta in May 2021.Photo : MS Dan Bard