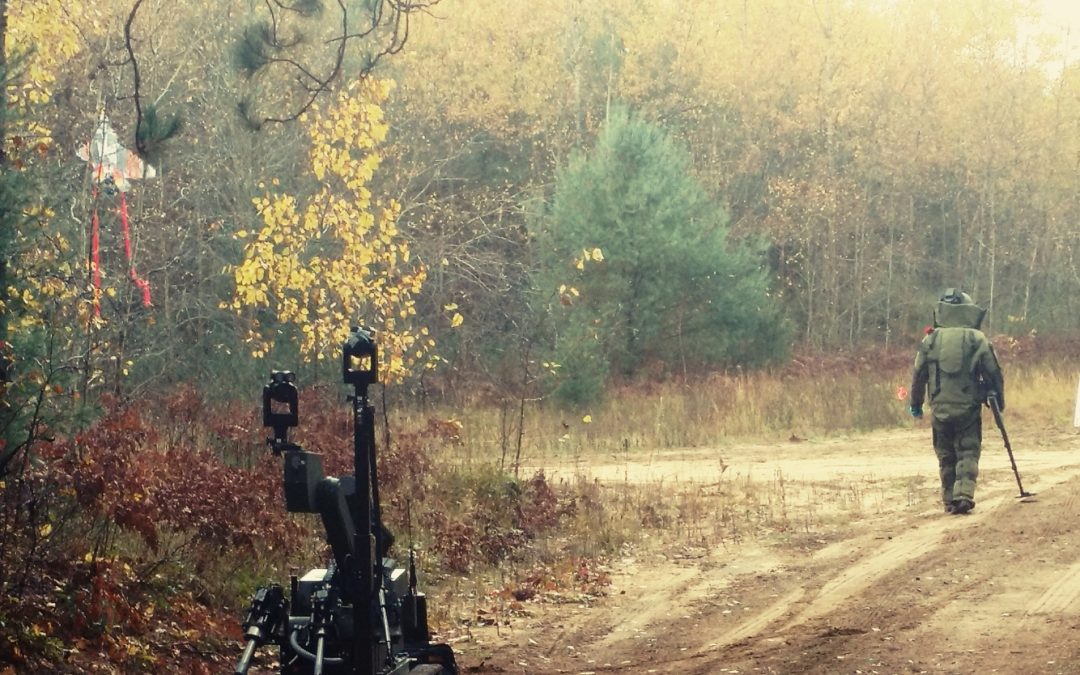 Since the first demonstration of the laser (an acronym for Light Amplification by Stimulated Emission of Radiation) in 1960, its applications have become numerous and commonplace. Naturally, military organizations immediately began envisioning future applications of novel laser systems in combat.

Through numerous demonstrations over the past decades, strategic visionaries have remained steadfast in their goals, one of which includes being able to use lasers to destroy distant targets using a directed beam of focused energy.

Although directed energy weapons (DEWs) are not currently used within the Department of National Defence/Canadian Armed Forces (DND/CAF), various laser technologies have been in the inventory for decades. For instance, laser range finders are used to measure distances, laser target designators guide munitions to the desired targets, and directed infrared countermeasures protect military platforms by confusing and dazzling the seekers of incoming missile threats. These systems all use laser beams, however none can be considered as DEWs. That is, they do not produce the power levels necessary to inflict damage on a target from a safe, standoff location.

Underscoring this evolution is a race to increase the laser power delivered on the target; for example, the U.S. Navy is installing 60 to 150 kilowatt (kW) lasers on their destroyers, while the U.S. Army is working toward 250 to 300 kW systems. Laser power directly determines the range and lethality of the weapon system, while also reducing the required dwell time until the desired effect is achieved.

The trend of increasingly powerful laser weapons has pushed smaller, “medium-energy” lasers (MEL) into the limelight. They are nevertheless readily available on the market for industrial applications, and offer a tempting potential of yet-unexplored military uses. Compared to their larger siblings, MELs in the 100 to 500 W range are advantageous due to three key features:

MELs are robust and reliable, supported by typical mean times between failures sometimes exceeding 105 hours. These are desirable, if not mandatory, requirements of military procurement, therefore it is reasonable to assume they could be seamlessly added onto any military platform, fit within a backpack-sized personal load, or be mounted onto an unmanned vehicle. 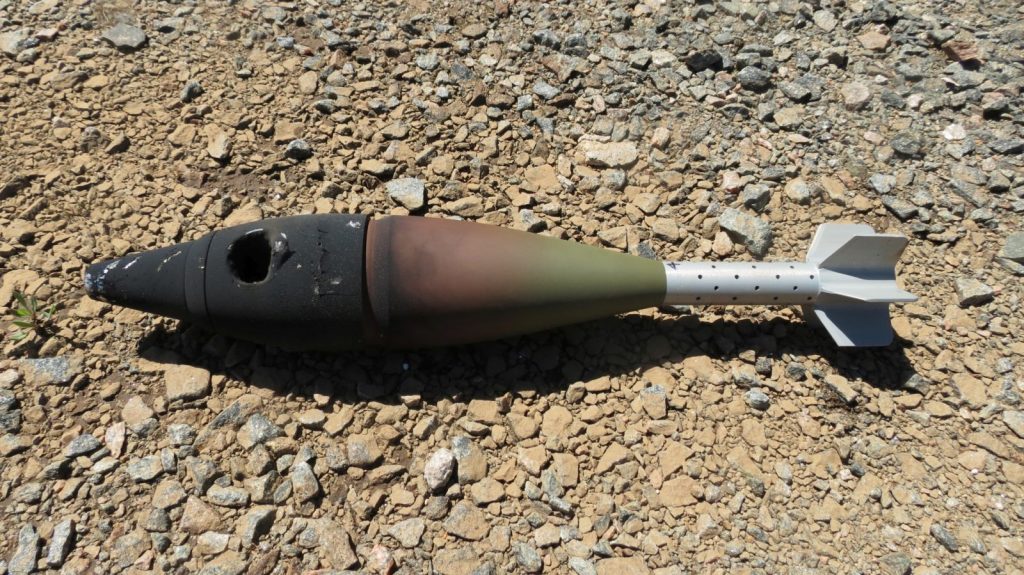 An insensitive munition round neutralized by a high-energy laser (HEL). Photo: DND

The consensus was to explore mounting a MEL system on robots used in IEDD render-safe operations. Specifically, the objective was to explore the usefulness of a novel tool utilizing a laser beam to cut and sever a number of specific targets at short ranges, such as duct-tape, cargo straps, rope or fabric. The result was the Standoff Laser Instrument to Counter Explosives with a Robot, a.k.a. SLICER.

The first-generation SLICER was integrated on a Telerob tEODor robot, the largest remotely operated vehicle (ROV) currently in-service with the CAF IEDD teams. The laser was optimized based on the specific scenarios and needs of the operators, while the interface and subsystems were designed to be integrated without hindering any of the ROV’s pre-existing functionalities.

The use of commercially available components allowed the project to evolve rapidly from the drawing board to complete systems testing in a little over a year. Exercise Ardent Defender 2019, an annual international IEDD exercise, used realistic scenarios to hone SLICER’s functionalities and to identify the context and tasks in which such a tool would be beneficial and complementary to the existing tactics, techniques and procedures (TTPs).

Notably, this was the first occurrence of a directed energy laser system being approved by the National Defence Laser Safety Office (NDLSO) for use in an exercise on a Canadian Forces base.

The SLICER tests were a success. The demonstration also provided proof of a fundamentally new concept, the feasibility to employ medium-power directed energy systems integrated with remotely operated platforms. The small-scale entry/gaining access tasks performed on the ground, including the laser’s ability to cut or drill through soft materials at close range, open up nearly unlimited possibilities to future Remotely Operated Vehicle (ROV) integration. For instance, one could envision a remotely piloted aircraft operator using a modular SLICER-like tool on a quadcopter to gain access to, and safely neutralize, an IED in a location otherwise impossible to access via the ground.

Initial feedback from IEDD operators following Exercise Ardent Defender was positive. However, it also highlighted some aspects of a laser incompatible with current render-safe procedures; namely, the undesirable introduction of energy into a potentially explosive system. For this reason, the focus of the EOD/IEDD community has shifted to different areas of MEL applications. Using the SLICER tool success as a foundation, the community recognizes the importance of in-Canada research and development expertise in this emerging technology.

Firstly, in a climate of increasing environmental awareness, the EOD community is interested in a SLICER-like tool as a replacement for traditional explosives and de-arming tools when rendering safe conventional munitions. Unexploded, misfired, and otherwise unsafe munitions are commonplace on weapons ranges, war-zones, and occasionally found as collectors’ items in residential areas. If proven successful as a disposal tool for these munitions, MEL systems would eliminate trace toxic residue by-products from the use of high explosive detonations during conventional munition disposal operations.

The same benefits would apply to the disposal of insensitive munitions, which normally require massive amounts of traditional explosives to detonate and/or deflagrate (burn) the filler.

Thirdly, as discussed previously, the military functionality of MELs extends well beyond their ability to remotely cut specific objects. Their power densities generated on-target are also sufficient to disable cameras or electro-optic sensors. Future MEL systems could easily be integrated on ground or air platforms and used to destroy hostile electro-optic surveillance and imaging sensors, thereby significantly reducing their situational awareness and targeting abilities. The need to have this capability will increase significantly as lethal autonomous or semi-autonomous systems proliferate, such as those already demonstrated in Russia. As these systems rely exclusively on their electro-optic sensor suite, MEL systems could represent an effective countermeasure. 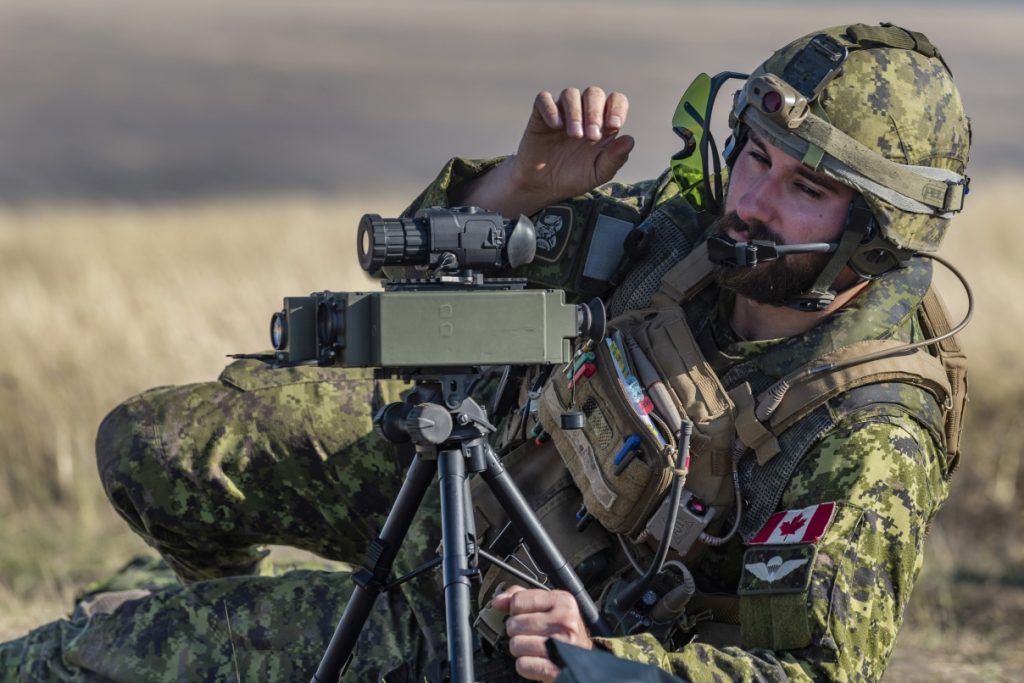 One of the core concerns pertaining to laser weapon system use is that of laser safety. Indeed, their power levels could result in ocular hazard distances extending for kilometers away from the laser source. However, the risk attributed to the use of such systems can be comprehensively mitigated by a number of approaches. In the DND/CAF, these are jointly developed by DRDC and the NDLSO, in conjunction with the National Defence Laser Safety Board (NDLSB). The NDLSB is chaired by the NDLSO and its membership has representation from the defence science community, the Quality Engineering Test Establishment (QETE), Canadian Forces Health Services (CFHS), as well as key stakeholders from the Army, Navy and Air Force, among others.

Laser safety risks during training and/or otherwise controlled environments are necessary to mitigate, and may be addressed in several ways. Using the SLICER as an example, the demonstration area at Exercise Ardent Defender was required to ensure a sufficiently sized backstop in the line of fire. When in use, the TTPs mimicked the deliberate use of a kinetic weapon, with an appropriate danger area and “arcs of fire” established. An additional intrinsic safety measure included the system’s design for short-range engagements, which ensured that the divergence of the beam remained large so as to decrease the hazard zones.

If (or likely, when) MELs are used in operations (combat or otherwise), laser safety risks will have to be addressed differently than in training. In operations, the mission has primacy, and the soldier-operator is not in control of all aspects of the situation.

Similar approaches can be used to establish a safe framework for the use of a MEL mounted on remotely operated platforms. Interlocks driven by the system’s position and orientation can prevent emission outside of the authorized arcs of fire, while integrated rangefinders can disable the laser unless a target is within a given range. In parallel, advanced laser sources operating at much safer wavelengths are currently being developed.

Finally, probabilistic risk approaches can be used to establish realistic safety zones based upon a thorough mathematic evaluation of hazards, including population density and the likelihood of intersecting a stray laser beam. DRDC Valcartier, the NDLSO, and QETE work in close collaboration with NATO allies to develop and refine these approaches in order to ensure future interoperability of laser weapon systems.

While the development of laser weapons focuses on increasingly large, powerful systems, the availability and usefulness of small yet robust systems cannot be overlooked. Offering significantly smaller capabilities than their kW-class counterparts, MEL systems are nevertheless able to provide solutions to technological challenges with their unique advantages.

As the number and capability of remotely operated systems available to the DND/CAF continue to grow, so do their possible payloads. Therefore, research and development of compact laser systems suitable for such platforms should be given high priority. These MEL systems can and will improve current capabilities, as well as be tailored for unique capabilities based on mission specifics.