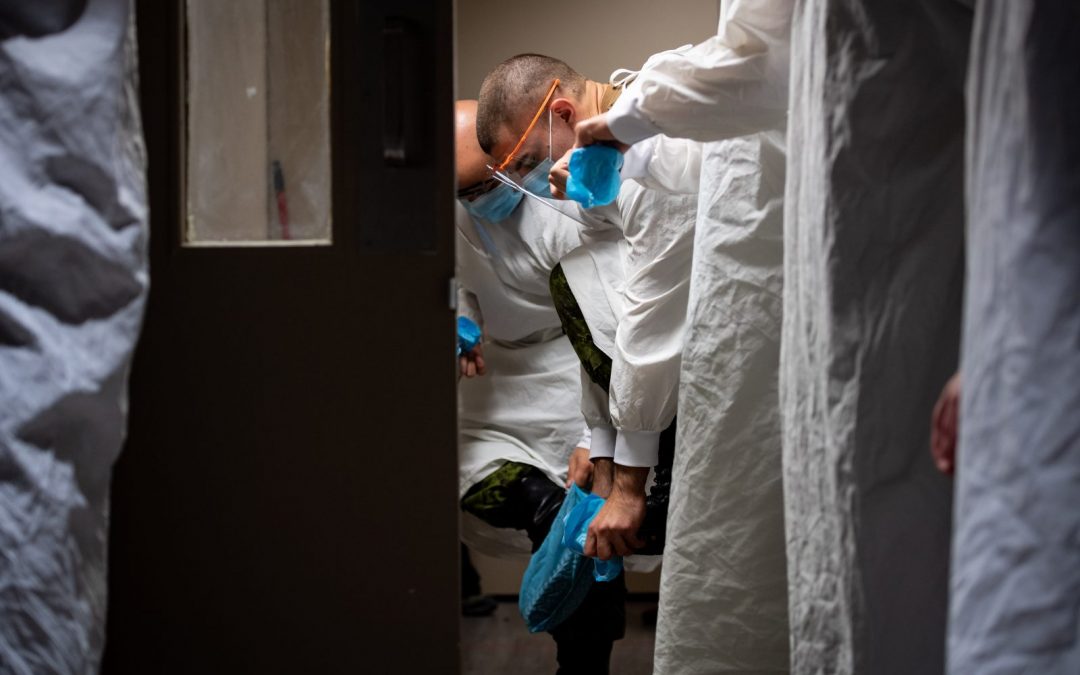 When the COVID-19 pandemic hit Canada in March 2020, it was obvious that the country faced an almost unprecedented emergency. Long-term care homes, housing some of our most vulnerable Canadians – the elderly and permanently disabled – were particularly hard hit. Provincial governments in Ontario and Quebec requested help from the federal Minister of Public Safety. To help in these facilities the Canadian Armed Forces provided medical personnel, backed up by Regular and Reserve Force members from units across the two provinces. These are the stories of some of the Reservists from Ontario.

Major William Bowes, Royal Hamilton Light Infantry. A former Regular Force Army Officer, he served as Officer Commanding (OC) 1 Domestic Response Company (DRC), Territorial Battle Group (TBG) 1: “It was around mid-March that I heard that it could happen. I was hearing rumours about what the federal response looked like. I don’t think I got confirmation until late March.”

Corporal Wolf-Peter Marty is a member of the 1st Hussars, from Sarnia, Ontario, who also served with TBG 1: “At the time there weren’t really any details other than that names were being gathered for interest in preparation for a possible domestic operation.”

Master Corporal Jason Laughlin, 1st Hussars, London, Ontario: “I was on a short-term contract when I heard about the opportunity to do something, and I went for that.”

Bowes: “I deployed to Canadian Forces Base (CFB) Borden as part of the Territorial Battle Group advance party. I was there a couple of days before the battle group. That was the first few days in April. Myself, the Sergeant Major and the other OCs, organizing what it would look like and how the training would run, and getting everybody together.”

Marty: “We ended up getting official word regarding who was being deployed as a part of Op Laser on April 5, and some key individuals within my unit did an absolutely amazing job of managing to organize and stand up a full armoured reconnaissance troop with such speed that we were in Blackdown (a training area of CFB Borden) with fully equipped vehicles by the next evening.”

Even as the Reservists arrived at CFB Borden in early April, it wasn’t clear what type of domestic operation they might deploy on, though from there they would be sequestered and centrally prepositioned, ready to support taskings received from the government in response to COVID-19 or other emergencies.

Corporal Kyle Gary Burch is a member of the Royal Hamilton Light Infantry: “We were deployed to CFB Borden and housed in the Blackdown component, which is traditionally a cadet summer training camp. But it had all the facilities, and they were large enough they could instruct us while maintaining social distancing. 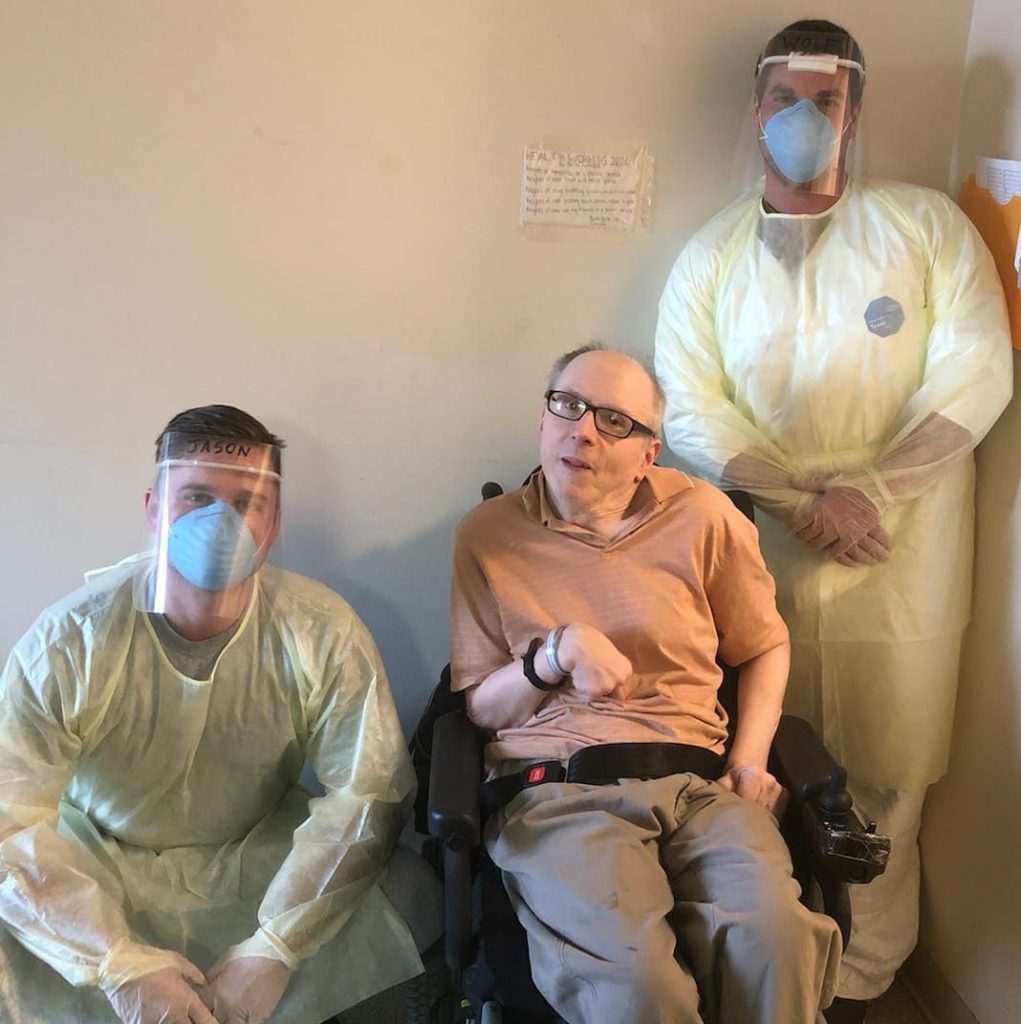 Members from different units were grouped together into new platoons and companies, based on the brigades their home units were part of.

Lieutenant Sarah Dawkins is a member of the Cameron Highlanders of Ottawa. She commanded 2 Platoon in the 3 DRC: “I’m an Infanteer by trade but most of my platoon were Armoured. They were from Oshawa, The Ontario Regiment. My Warrant Officer was from the Second Irish in Sudbury [2nd Battalion, Irish Regiment of Canada]. We had one Artillery member and a few Cameron Highlanders and Governor General’s Foot Guards from Ottawa as well.”

Burch: “All the different units, it’s nothing new for us. We’ve all been on courses together, joint training together. I’d catch up with soldiers I hadn’t seen in three, four years and we’d continue our conversations like it was yesterday.”

What they would be responding to was still uncertain, so they trained for a number of scenarios.

Dawkins: “The training was tough at first. We weren’t sure if we were going to help with floods or COVID.”

Burch: “We did standard training. Sandbagging, evacuations, assisting local law enforcement, some training on Rigid-Hull Inflatable Boats (RHIB), in case there was a natural disaster.”

Bowes: “Our training evolved as our awareness of the response did. It was very fluid.”

In late April, the Reservists began to deploy into the first five of what would eventually be seven long-term care facilities in the Greater Toronto Area. 1 DRC was given responsibility for three homes: Holland Christian Homes Grace Manor, Eatonville and Hawthorne Place. As part of 3 DRC, Sarah Dawkins’s platoon was to cover Downsview Long Term Care Facility, starting in late June.

Bowes: “I have never experienced a military operation that moved as fast or as urgently as we did. From learning that we were going to respond, to actually having soldiers inside, was a matter of a couple of days.”

Laughlin: “When we deployed, we were the first ones to go in. It took a couple of days to really set in stone what we were supposed to do.”

Burch: “We had Tyvek suits, one-piece jumpsuits, our face masks, more than enough gloves and an endless supply of hand sanitizer. We were changing out our suits and gloves and mask constantly.

Burch: “We had three sections. One stayed back at the hotel. They were the unsung heroes. They deserved a lot more of the credit. Without them we wouldn’t have been able to function; they made sure the elevators were sanitized (after use), that hot meals were brought to us. They also provided us with laundry services or anything else to ensure we were comfortable.”

Laughlin: “How it worked: We had our little teams; two support staff and two medical staff on a floor with a third, a senior nurse, who floated between the second and third floors. After a while, we decided to stay on a floor.”

Marty: “Even just the little things made a big difference. For example, the medics quickly came up with the idea of writing our names at the top of our face shields with a sharpie so that the residents could more easily identify and start to recognize us. Well, thanks to us combat arms folks, that of course quickly progressed to also writing our names on our disposable Tyvek suits, then incorporating smiley faces into the letters, then eventually doodling other fun things like a flower or a tie to help cheer people up.” 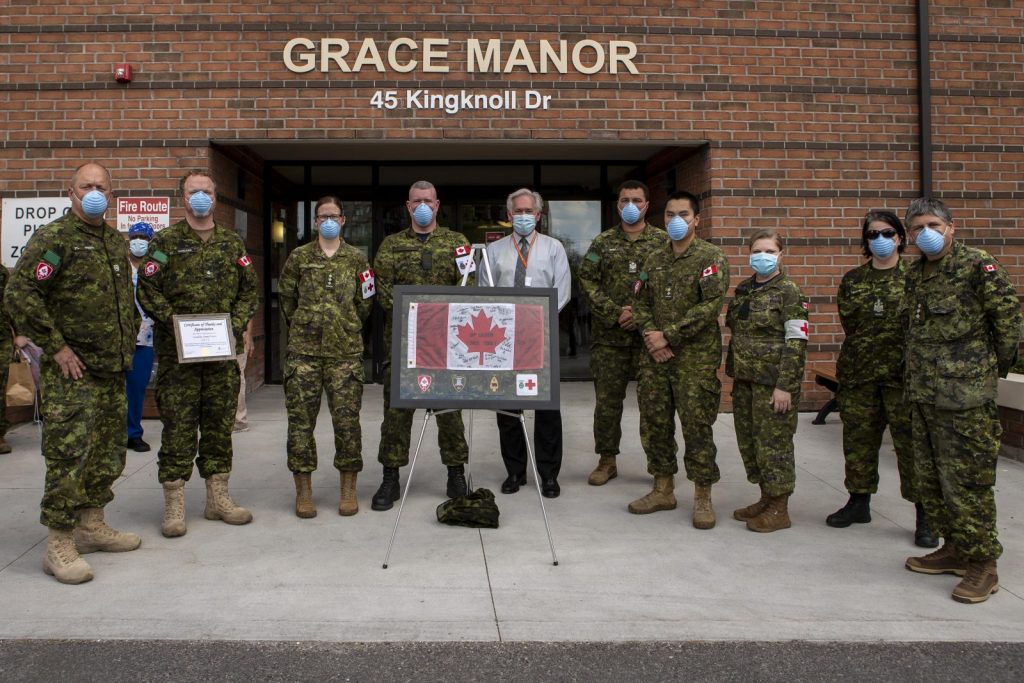 Deploying to work in and around patients suffering with COVID-19 meant not just being away from home, but that there was always a chance they, too, might be infected.

Dawkins: “I was never personally concerned. If I had to go home to my family every day, I’d probably have been a little bit more.”

Burch: “My mother’s always been the concerned type, so she did have her doubts. But overall, my family thought it was right. It was tough on the kids, [his sons, Hunter, four, and Damon, one], they didn’t quite understand, but I kept in touch with them.”

Marty: “It was definitely hardest on my fiancée, who just four months prior had moved from Victoria, B.C. to live with me and start our life together in Sarnia. Luckily for me, she’s an amazing woman and an incredibly supportive partner.”

Working with the patients, they soon began to make friends.

Marty: “The best part of the whole experience was getting to know the residents, their stories and personalities.”

Laughlin: “Definitely some really neat characters. I have to make sure Bryan Campbell gets mentioned. He wrote poems for us. He always loved to talk to us and would ask us to ramble about our jobs. And I have to mention Dorothy, she was really cool. She actually used to work for the United Nations, even grew up in Africa. It was just neat to listen to her talk. She cried when we left, and it made me feel really bad. Bass really struggled to talk, but me and Corporal Marty loved to talk to him. Eventually we kind of became the translators for him. We called it ‘Talk Bass’.”

Marty: “He was such a mischievous troublemaker who delighted in trying to stir the pot and mess with people, but it took us a while to figure that out because of a fairly significant language barrier. Once we got to know him though, it brought smiles to our faces to see him every day.”

Burch, who was working at Holland Christian Homes Grace Manor, where many residents were Dutch: “Probably the most memorable thing was May 5. The Dutch celebrate that as Liberation Day. They had a small parade, if you will. The owner, the Mayor and a lot of residents were there for a flag-raising ceremony with the Dutch flag and the Canadian flag. I was one of the soldiers selected to raise the Canadian flag. It was a fantastic ceremony. I think that made a lot of the soldiers feel really good about themselves.” 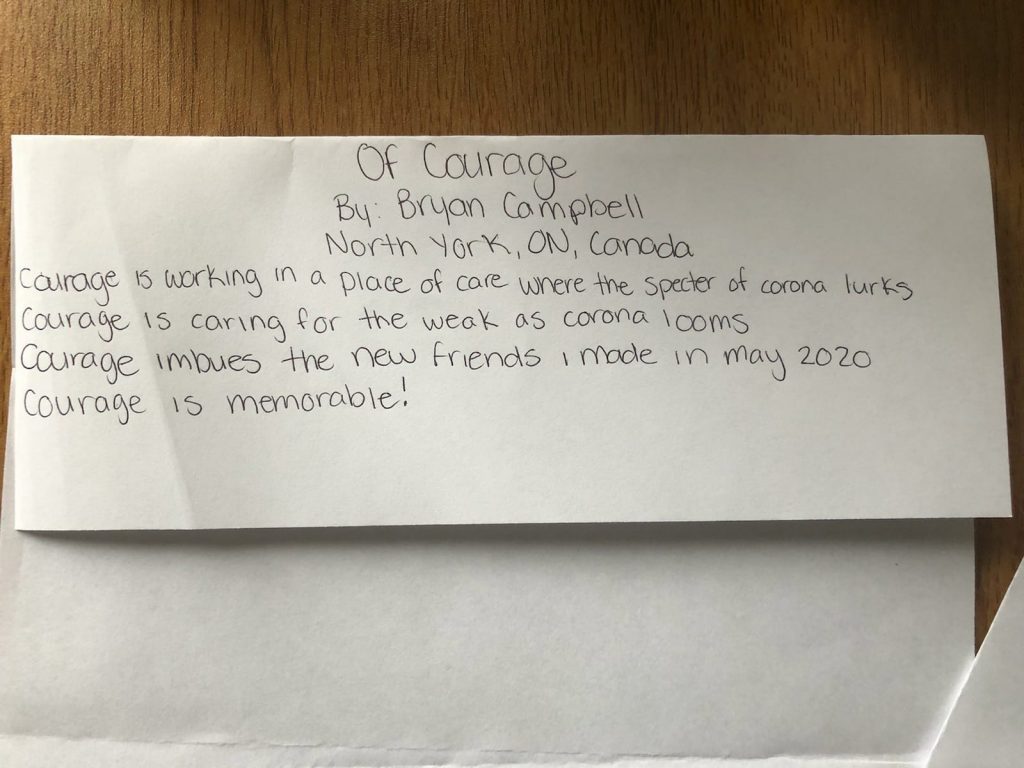 A poem dictated by Hawthorne Place resident Bryan Campbell for all visitors to the home. Photo: Shelby Barton

By early June, as the wave of the pandemic began to ease, the Reservists began to withdraw from the long-term care facilities. In all, more than 500 CAF members had worked in the seven facilities in the GTA.

Dawkins: “I got promoted to Lieutenant on this operation. It was my first time in a leadership role. I learned so much about my skills and how I wanted to develop my subordinates.”

Burch: “I think a lot of us learned to be a lot more patient and compassionate.”

Laughlin: “It affected me personally. In our long-term care facility, there were people who just couldn’t take care of themselves. It gave me a whole new perspective … I want to start volunteering for work related to that.”

Bowes: “There were days when everything was going so quickly, where I lost sleep trying to adapt to things, but the soldiers I had did such an exceptional job that I felt comfortable putting my trust in them. They had such a positive attitude and they did such an incredible job.”

Dawkins: “My platoon was itching to get out there. It shows the power of the Reserves. All these members have civilian lives and they all come together in these times.”