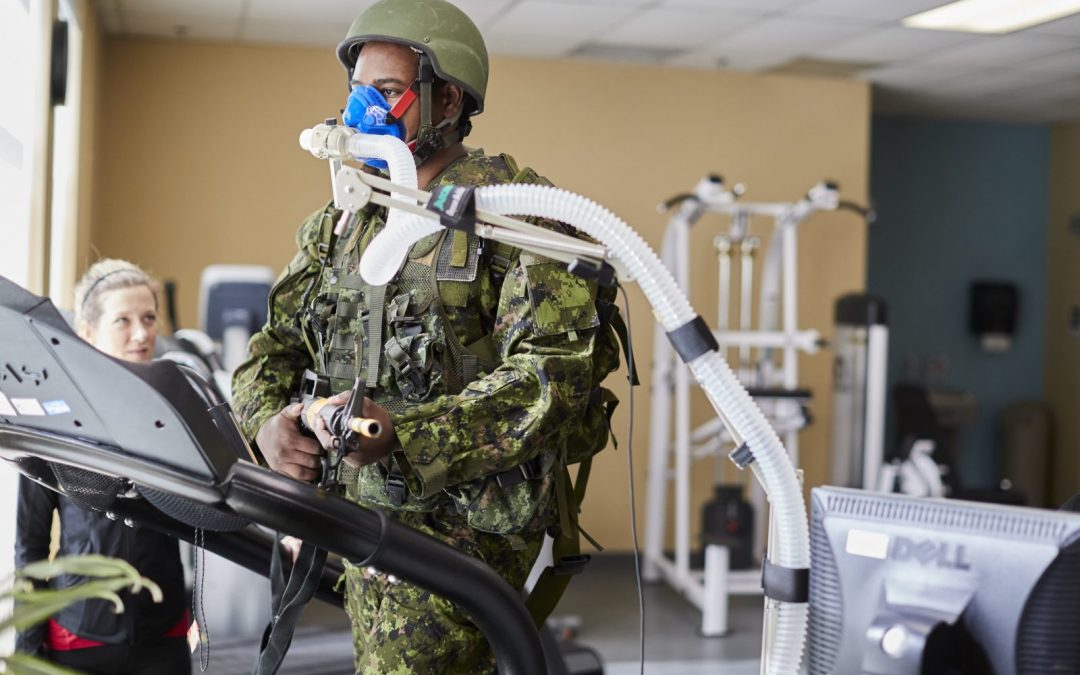 The development and evolution of a fitness objective or occupational fitness standard is likely a more complex and thorough process than one would expect. There are layers of research to ensure reliability, sensitivity, validity, diversity, accommodation, administration and delivery considerations. What follows is a brief history of the conception and development of the FORCE Combat assessment of soldiers’ physical readiness and the work of the research team that has helped successfully develop it for the Canadian Army.

Army training follows two main doctrines, the Battle Task Standards (BTS) and the Individual Battle Task Standards (IBTS). The IBTS has a physical component, focused on improving the physical capacity of the soldier in the form of muscular strength and endurance, aerobic capacity, and agility, to meet the demands of serving in the Army. Physical fitness is a fundamental component of the Army Performance Triad and essential to readiness, resilience and total fitness. The IBTS for physical capacity was the Land Forces Command Physical Fitness Standard (LFCPFS). As of 2017, it is FORCE Combat.

FORCE Combat allows the Army to assess soldiers’ physical readiness and resilience as a part of the Mission Ready strategy. Prior to FORCE Combat was the Battle Fitness Test (BFT), developed from 1984-1991, with four representative common tasks of an Army soldier: Evacuation of a casualty in 60 seconds or less, using a fireman’s carry over 100 metres; ammunition box lift in 300 seconds or less; maximal effort digging in 300 seconds or less (move 0.486m3 of pea gravel); and a 13-kilometre loaded march carrying full fighting order (FFO=24.5kg) in 2 hours and 24 minutes

In 2007 the Canadian Army Doctrine and Training Centre (CADTC) tasked the Personnel Support Programs’ Human Performance Research & Development (PSP HPRD) group to review the relevance of the BFT in light of current demands. Of primary concern were injures experienced by members performing the BFT and a lack of standardization in delivery, preventing individual assessment.

Based on a detailed review of the missions and demands since the early 2000s, and 13 observations of field exercises, the research team collected data on dismounted patrols, loads carried, as well as speed and distances traveled. As a result, it was recommended that the fireman’s carry be replaced by a casualty drag which also captured the demands of a vehicle extrication.

In addition, the PSP HPR&D team conducted a series of online surveys and one-on-one interviews with members from CFB Petawawa, CFB Edmonton, and CFB Valcartier from 2008 to 2010. 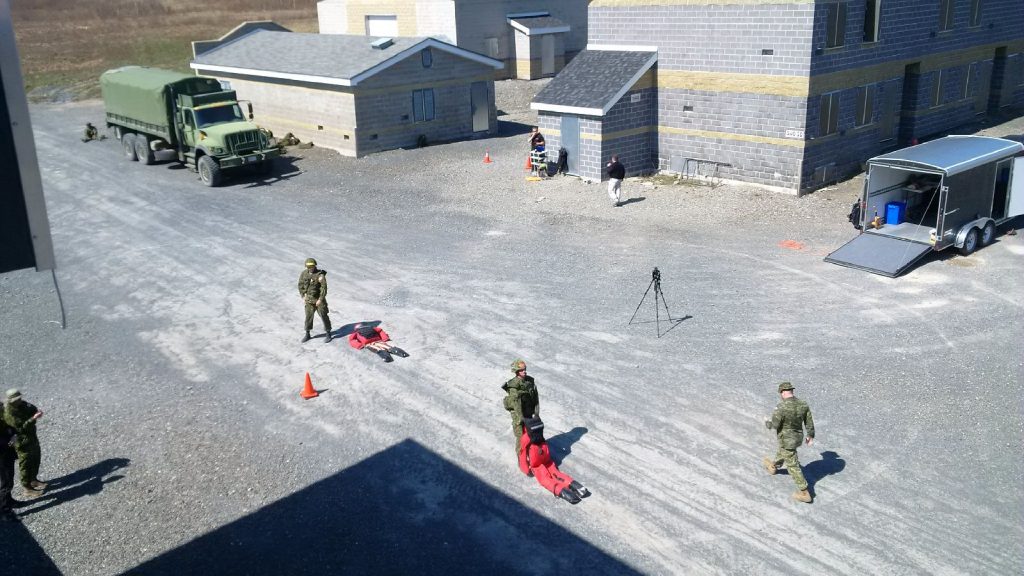 Soldiers conduct a 25-metre casualty drag with an 82kg mannequin as part of the urban ops simulations in Gagetown in 2018. Photo: Cpl Genevieve Lapointe

In 2008, the PSP HPRD team commenced work on developing element-specific physical performance standards for the Royal Canadian Air Force and the Royal Canadian Navy, as well as a more relevant BFT. In the end, it was decided to implement a new Canadian Armed Forces (CAF)-wide fitness standard to measure universality of services demands, as opposed to separate environmental standards. This evaluation was named Fitness for Occupational Requirements of Canadian Armed Forces Employment (FORCE).

FORCE was embraced by the Army as a valid minimum physical employment standard, but it was recognized that Army IBTS physical fitness objectives should be more reflective of demands of recent deployments.

Before FORCE, the Army achieved exemption from the CAF EXPRES test on completion of the BFT. However, in 2009 the physiological demands (oxygen consumption) of the then 13km ruck march were measured directly as 23 milliliters per kilogram per minute, the same aerobic capacity required to achieve Level 2 on the EXPRES shuttle-run test. Therefore, the Army was not achieving universality of service though passing the BFT.

Results of 851 online surveys and 78 one-on-one interviews found that 57 percent reported dismounted patrols shorter than 5km, and only 13 percent reported performing dismounted patrols between 10km and 15km, despite the BFT being 13km. These interviews identified that the average load worn during a 24-hour operation was approximately 37kg, and 52kg on operations lasting beyond 24 hours.

This was 12kg or more in excess of the load worn, and less than half the distance marched, compared to the BFT. However, training exercises were still following 13km routes through the training area with about 24.5kg or less.

Surveys and interviews indicated that a dominant component of Army missions took place in built-up areas, a demand missing from the BFT. The metabolic demand of certain urban operations tasks was measured by the PSP HPRD team as high as 34 milliliters per kilogram per minute, averaged over a period of five minutes.

A generic skill-free simulation for urban operations was developed with leadership and subject matter experts from the Combat Training Center (CTC) at CFB Gagetown. The simulation consisted of an approach to a three-story townhall building, window entry, walking at an operational pace to the third floor, and performing a two-person casualty evacuation back to the point of entry, followed by a 25-metre casualty drag with an 82kg mannequin. Teams of five performed this scenario repeatedly, and the metabolic demand was obtained.

Based on these measured demands of the scenario, the PSP HPRD team proposed the concept of a modified FORCE evaluation (FORCE Combat). With the support of CADTC, various options were trialed with Army research participants, including 35kg or 45kg loads for the 5km march, and the FORCE circuit performed in physical training gear, CADPAT, and FFO (25kg or 35kg). Energy cost and metabolic data were presented to experts from the Infantry School at CTC, and CADTC. Data demonstrated that to ensure a member could perform the urban simulation, the 5km load-bearing march should be completed in 50 to 60 minutes wearing Battle Order (35kg), followed by a 5-minute rest to remove the pack, then a FORCE circuit wearing FO (25kg). 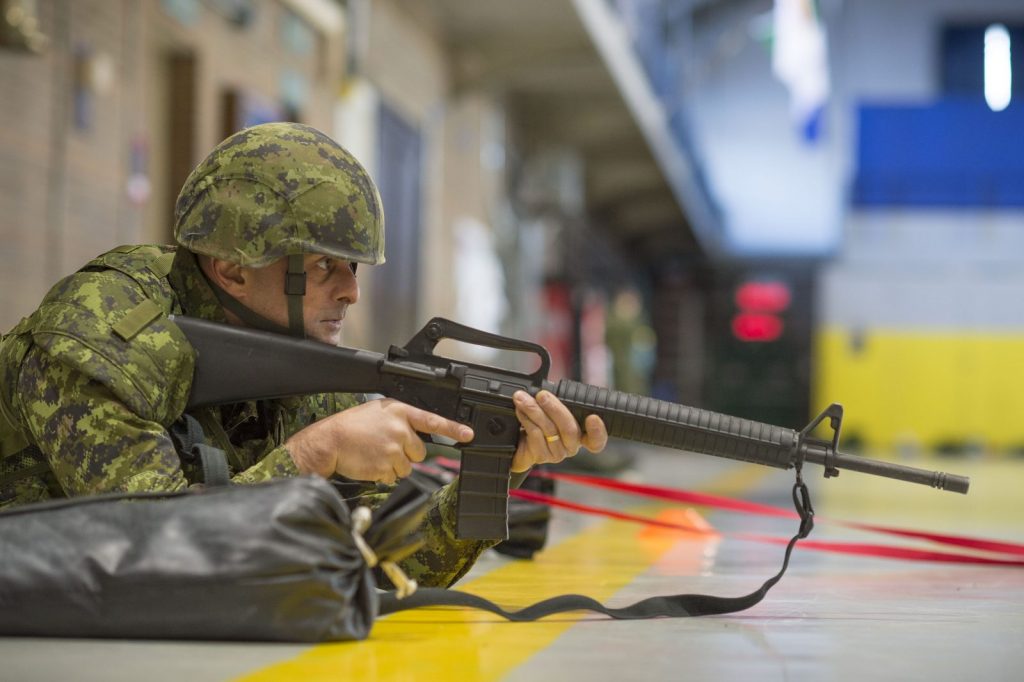 FORCE Combat was approved by the Army on May 18, 2016 with a plan to roll out in April 2017. Before the April Implementation it was agreed to conduct reliability testing and FORCE Combat trials. The ideal time to complete the circuit component of FORCE Combat had not been identified. Also, the initial measurements of the metabolic demand of performing the urban scenario had only been conducted in a sample of male infanteers, which does not match the diversity of the Army. This allowed for a gender and age free standard, based on occupational demands.

Therefore, the PSP HPRD team revisited the original urban scenario with a broader sample of combat arms and support trades, older members of various ranks, and female members. To predict a FORCE Combat completion time matching the metabolic demand of performing the urban ops scenario, linear regression analysis was employed, and a time of 14 minutes and 40 seconds was recommended.

In the initial trialing of FORCE Combat, clear signs of substantial skill components affecting speed and performance were observed, suggesting a training effect on performing FORCE Combat, where multiple trials could result in improved performance without any change in physical capacity. Therefore, a reliability study determined how many practice attempts should be recommended. Over a three-week period, each participant was asked to come in for seven testing days. The only significant increase in performance was observed between the first and second trial, indicating one practice trial prior to their first FORCE Combat was sufficient.

Preliminary results from the trialing of FORCE Combat showed that as much as 33 percent of Army staff were unable to complete, with no work up training. This discovery prompted the initiation of a research study to design a 12-week progressive training program (using the DFit.ca platform) of 60 min, five times a week, for 12 weeks to prepare staff for FORCE Combat.

Like the BFT, the 12-week training program is an integral part of ensuring readiness without injury and is reflective of the Mission Ready strategy. Personnel who are likely or required to complete FORCE Combat are encouraged to begin work-up training. Army leaders are expected to promote and support training programs enabling the development of well-trained soldiers.

More information regarding FORCE Combat can be found at www.cfmws.com, and FORCE Combat training programs are available at www.dfit.ca. 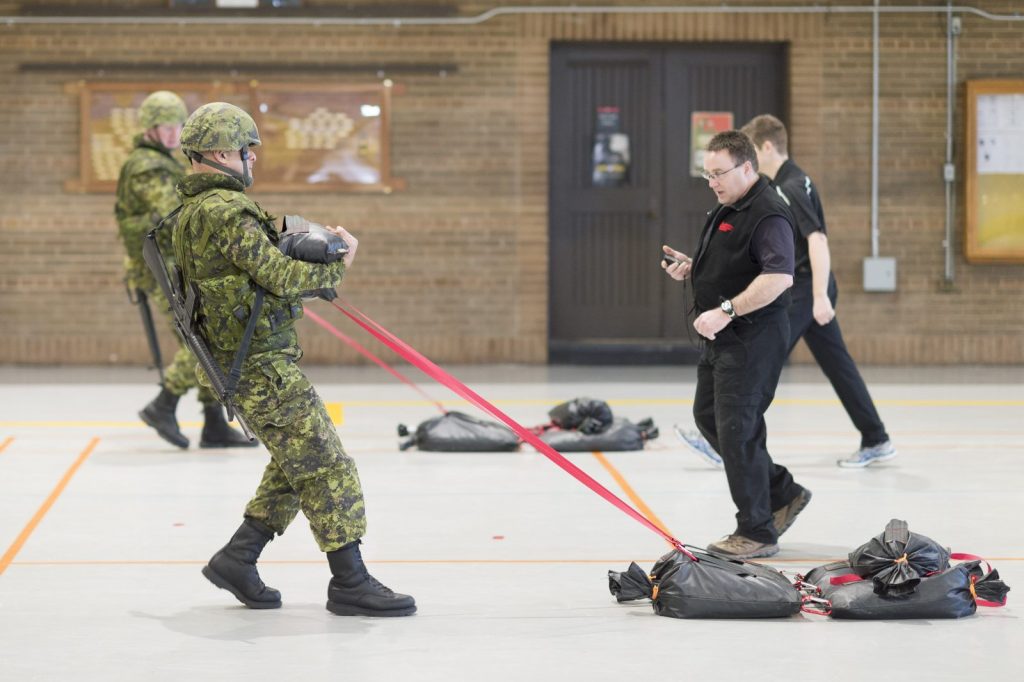 The current Heat Stress Prevention Advisory for the CAF was updated in 2016, prior to the implementation of FORCE Combat, based on the demands of the BFT, which although a longer march, required less load and no fragmentation vest.

In light of FORCE Combat implementation, with the risk of HRI in mind, an upper limit of 19°C wet-bulb globe temperature (WBGT) was suggested to reflect the Vice Chief of the Defence Staff General Safety Program, Vol 2. However, no scientific data exist on how temperatures above 19°C WBGT would affect cardiovascular and thermoregulatory responses in members performing FORCE Combat.

These preliminary results seem to suggest that performing FORCE Combat at environmental conditions approaching 24°C WBGT would not increase the risk of exposing the general members to undue harm, but a more detailed analysis of this data is required before such a recommendation can be made.

Future evolution for FORCE Combat should include intelligent data capture and data analytics of Army performance to allow quarterly briefings to the leadership on operational readiness. This technology, used for the FORCE evaluation, captures member performance and has been found to be very informative and help better direct physical training programs and services as well as identify needs for injury prevention strategies.