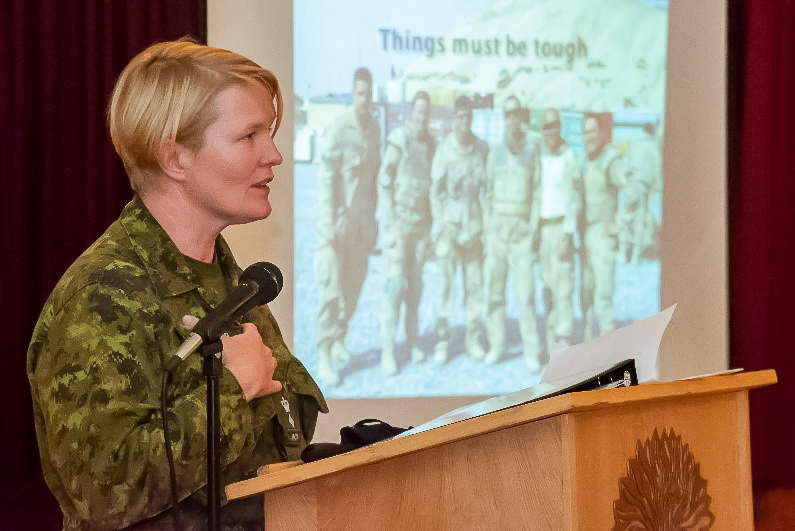 In the fall of 2020, the commanding officer of the Princess Louise Fusiliers (PLF), Lieutenant-Colonel Barry Pitcher, launched a new initiative to help soldiers understand societal diversity in the ranks. Called the Diversity Soldier Experience Program (DSEP), the idea arose following a summer basic training graduation in which he attended as reviewing officer.

“Looking out at the soldiers on parade that day, I felt that what I was seeing wasn’t a true representation of the community we serve,” Pitcher said.

A working group was formed and concluded that to effect true change and promote inclusion within the Primary Reserve, there needed to be synergy from within. In other words, DSEP would be designed to educate ranks through the medium of “shared experiences.” As such, the initiative would focus on key stakeholder groups to introduce soldiers to the societal diversity within Canada and, in particular, the Canadian Armed Forces (CAF).

A template was designed by the working group to be encapsulated in an informal course format for Primary Reserve members to attend both in-person and through an online portal. Given pandemic restrictions, the course had to be flexible enough to shift online at a moment’s notice. The unit formed a small cadre to teach the courses, led by Second Lieutenant Jerome Downey, who conceptualized key teaching points and experiences into deliverable course content.

The first module covered the history of how women have contributed during wartime and peacekeeping service, and how they continue to serve today. The course hosted many special guest speakers over these first sessions at the North Park Armoury in Halifax, N.S.

Corporal (retired) Marlene Clyke was one of the first Black women to enroll in the Canadian Women’s Army Corps. She is a respected advocate in her community and a pioneer for Black Canadian women in uniform. She spoke proudly of her time serving in the Army, beginning at the age of 17, and how her experiences in the military shaped her as a present-day community leader.

October was Women’s history month and coincided nicely with the initial presentations. Course attendees held various roundtables on the achievements of women on the world stage. One of the key themes for the module was Canada’s role as one of the first countries to allow women to serve in the military – it now boasts one of the highest proportions of women in uniform – and Canada’s demonstration that women are fully capable of serving within combat arms units. The course heard from Lieutenant-Colonel Eleanor Taylor in this regard; she shared her personal experiences of overcoming adversity and breaking barriers as an infantry company commander in Afghanistan. 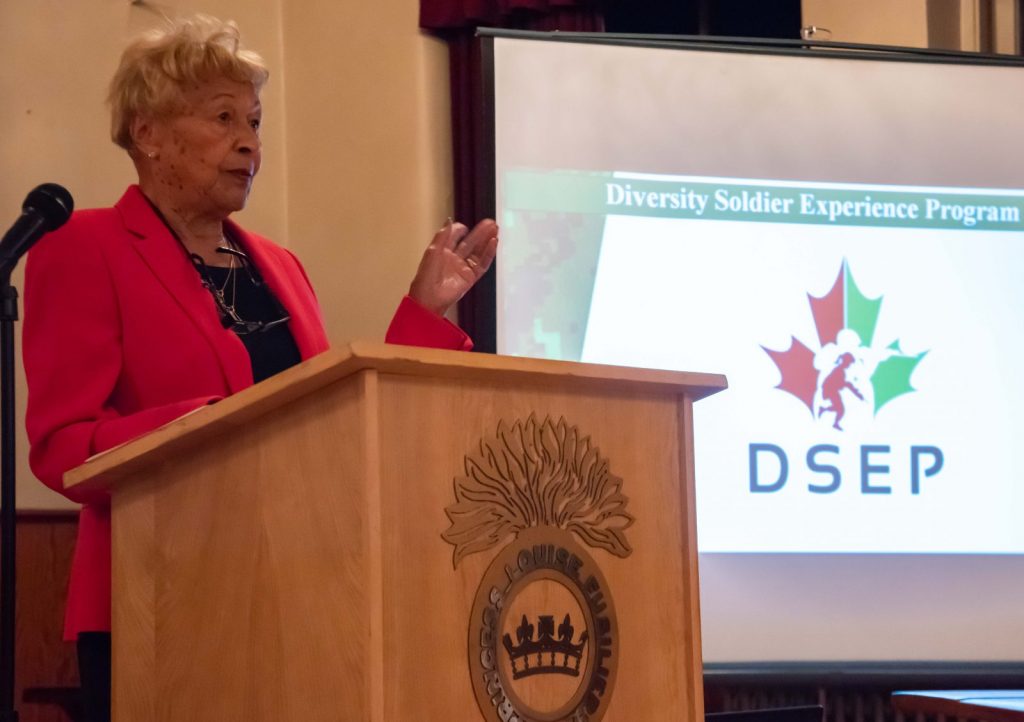 Over the winter, the DSEP program continued with a module on Indigenous, Metis and Inuit Canadians in the CAF, courses that offered candidates an understanding of Indigenous culture. They learned of the historical evolution of treaty rights and the terrible chapter of residential schools and the lasting impact it has to this day.

The CAF ‘Black Bear’ program was highlighted as an ongoing best practice that leverages connections to communities and enables a pipeline for Indigenous youth to gain a career in the CAF. Guest speakers included Honorary Colonel Dr. Donald Julien, executive director of The Confederacy of Mainland Mi’kmaw, and John Sylliboy, executive director at Wabanaki Two-Spirit Alliance.

Near the end of this interactive module, Honorary Captain (N) Debbie Eisan attended a collaborative in-person event in her ceremonial dress and sang the Mi’kmaw Honour Song for all the participants. She offered insight into the important connections of people and territory, and taught the values of Mi’kmaw cultural competencies.

The final module on Black Canadians in February 2021 coincided with Black History Month. One of the first takeaways was the importance of recognizing No. 2 Construction Battalion, a First World War all Black Canadian unit initially based out of the Pictou area of Nova Scotia. Of significance, they were a segregated unit and, despite volunteering to fight overseas, were not allowed to engage in frontline combat. Yet despite facing severe limitations on recruitment and wartime employment, they would go on to distinguish themselves as a premiere construction unit deployed throughout Europe.

Guest speakers included Dr. Kirrily Freeman, Associate Professor, St. Mary’s University, and Sergeant Craig Smith, currently in charge of the Nova Scotia RCMP Crime Prevention & Victim Services. Smith, an accomplished author, including the book, “You Had Better be White By Six A.M.” : The African-Canadian Experience in the Royal Canadian Mounted Police, focused on his own struggles with bias and racism in law enforcement. Many parallels evolved for discussion with life in military uniform and the concept of unconscious bias.

The final session was in-person at the North Park Armouries with two guest speakers, Chief Warrant Officer (retired) Cy Clayton and Wayn Hamilton, chief executive officer of African Nova Scotia Affairs (ANSA). Clayton discussed his 40-year career with the CAF, his many encounters with racism, and how those acts were contrasted by experiences with great leaders who promoted his career. He emphasized that if it were not for leaders that “went against the grain,” he would never have been entrusted with key roles such as the first Black Base Chief Warrant Officer. 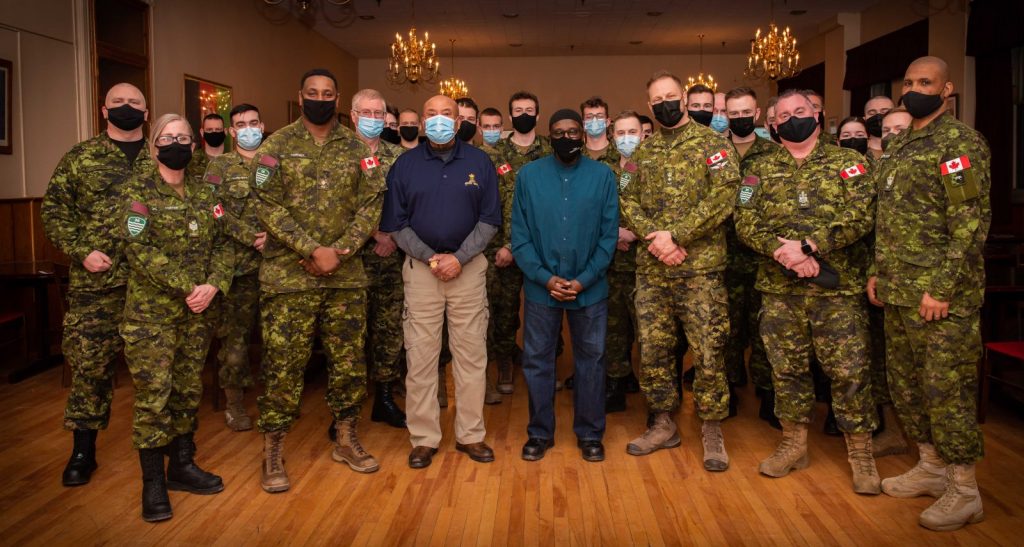 FROM PILOT TO PROGRAM

At the conclusion of this innovative program, participants received a certificate and symbolic patch that highlighted their six-month journey of interactive and immersive learning. Based on feedback from students, instructors and guests, the DSEP pilot program met the aim of creating that synergy within, and thereby stimulated much needed discussions on diversity in the CAF.

Following a comprehensive review in March 2021, the new plan for the DSEP is for the modules to be expanded to include historical site visits and interactive community events. The course will also be shared across 36 Brigade and 5th Canadian Division in the fall of 2021 so all units can gain from this opportunity of shared experience in the spirit of inclusivity.

Captain Michael Gray is a Class A Reserve Infantry Officer currently serving as a Company Commander with the Princess Louise Fusiliers. He supervised the introduction and execution of the pilot DSEP program. A former RSM with 39 years’ service in the Reserves, in his civilian life he is the Deputy N6 for Maritime Forces Atlantic. Second Lieutenant Ahmed Elkar is a Reserve Officer with three years’ experience with the Princess Louise Fusiliers. He enrolled as a mature member and is a first-generation immigrant to Canada.