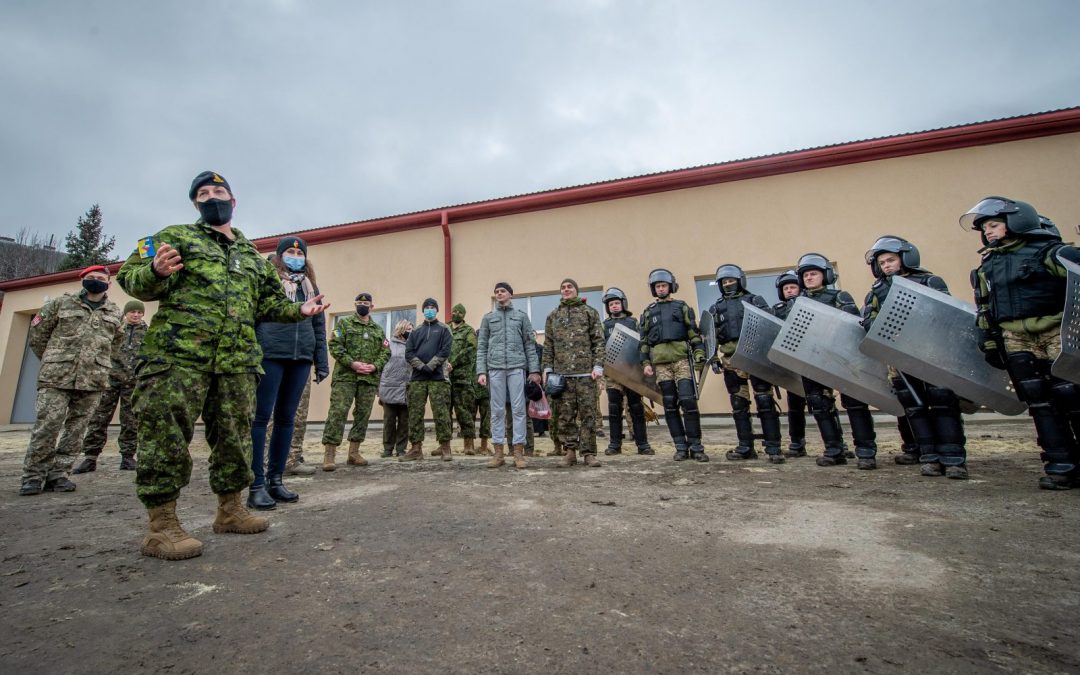 Diversity in the ranks matters. Lieutenant-General Wayne Eyre reiterated that point when he revised and reissued his command philosophy as the commander of the Army at the time in early February. “I consider diversity to be a force multiplier that better enables us to address complex issues and thus must be nurtured and protected,” he wrote.

The Army still has much to do to establish a better gender, racial and ethnic balance among soldiers – women, for instance, comprised less than 14 percent as of February 2020, according to National Defence. But it doesn’t need to look any further than Operation Unifier in Ukraine to understand the importance of the commander’s intent.

“The organic diversity of our Task Force (TF) is a reflection of the strength of the diversity in the Canadian Armed Forces,” said Lieutenant-Colonel Sarah Heer, commander of the 10th rotation of the security force training and capacity building mission. “It has allowed us to have a far greater reach and impact then we could have had with a single homogenous group.”

ROTO 10 had over 200 members representing more than 40 different trades from the Regular and Reserve Force providing officer curriculum development, NCO leadership development, individual specialist training, and collective training for both the Armed Forces of Ukraine (AFU) and the National Guard of Ukraine (NGU).

Diversity in its composition enhanced the TF’s ability to gather information and improved the credibility and effectiveness of its interactions with the host nation, she said.

“The TF is fortunate to have various leadership roles filled by women. This conveys a strong message of equality between the capabilities of men and women, and provides clear international examples for the AFU and NGU of women as legitimate military leaders, highlighting that gender is not a barrier in this regard and supporting Women, Peace and Security (WPS) initiatives to integrate gender perspectives on operations.” 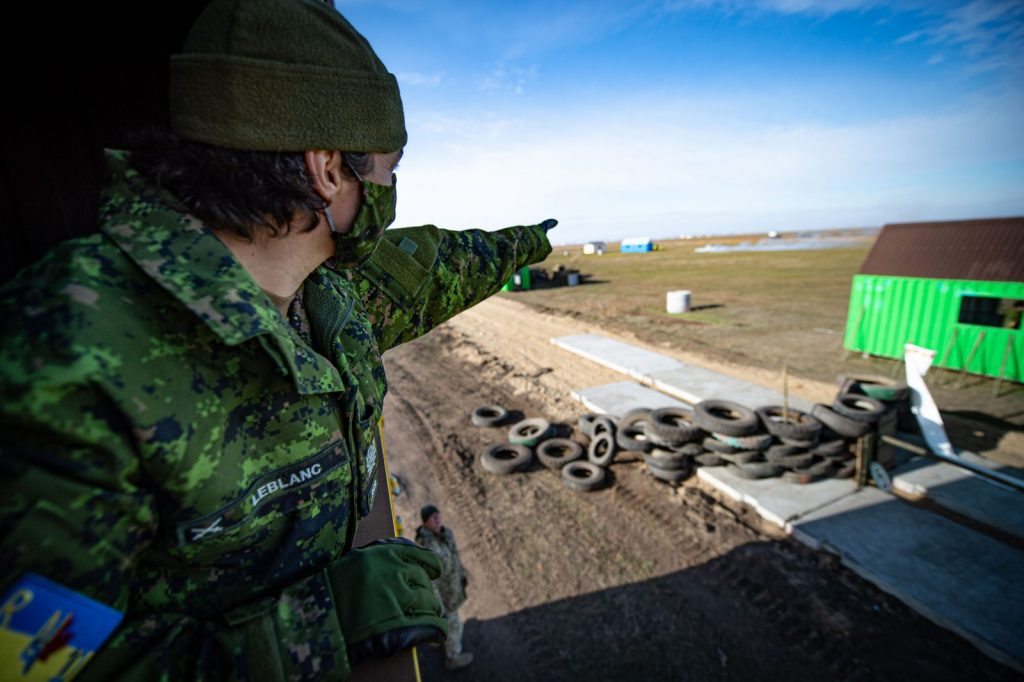 Among Heer’s leaders was Sergeant Danielle Larocque, an Officer Development Team member from the 3rd Battalion, The Royal Canadian Regiment, who taught troop leading procedures and the military decision-making process with the Air Assault Academy of the AFU Officer Military Academy in Odesa.

“The Air Assault Corps does not have any female members and, in spite of this, Sgt Larocque has been able to forge and nurture a strong relationship and earn the respect of the Academy staff and students, many of whom are combat veterans of the ongoing conflict in the Donbass region,” said Heer.

Captain Ellen Humenny, of the 2nd Regiment, Royal Canadian Horse Artillery, was the Task Force gender advisor to the commander and staff to ensure gender perspectives and gender-based analysis (GBA+) are applied. She also served at the NATO Liaison Office in Ukraine as their WPS advisor.

“Our diversity, gender perspectives and GBA + analysis have greatly assisted us in delivering training and capacity building programs here in Ukraine while also allowing us to effectively support Ukrainian aspirations to achieve NATO interoperability which includes integrating gender perspectives on operations,” said Humenny

One of her greatest successes was training and workshops with the NGU Non-Commissioned Officer Academy in Zolochiv. “It was an incredible chance to be able to speak with NGU personnel that work at the tactical level, who are directly affected by the legislation, policies, and doctrines that are being currently amended and created at higher levels. Sometimes, there is a disconnect from the strategic level and the tactical, a problem that I don’t believe is unique to Ukraine. But to hear the willingness of NGU members regardless of gender and ranks, to have the conversation about gender equality makes what I do at a higher level much more tangible and applicable.” 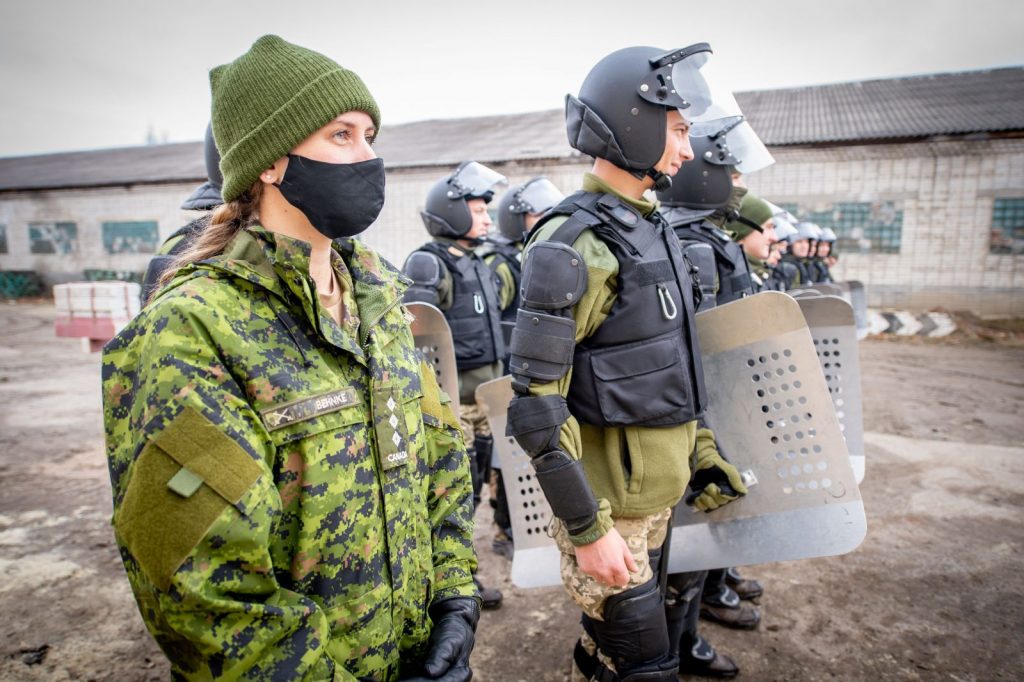 Capt Nichole Behnke, officer commanding the Military Police Training Group, participates in a defensive formation and the clearing of a building by the 25 MPTC candidates and staff in December 2020. Photo: Cpl Melissa Gloude