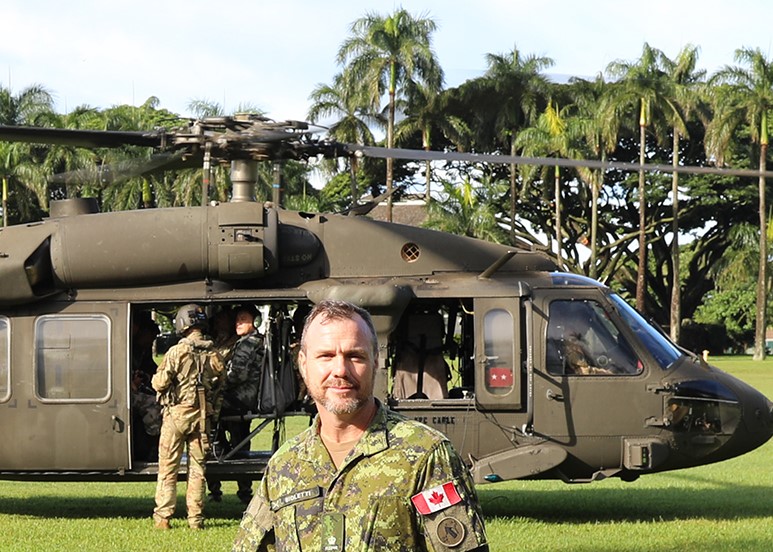 When the Obama Administration announced a “pivot” to the Pacific in 2011, the proposed rebalancing of diplomatic and military resources renewed widespread discussion about the strategic importance of the Indo-Pacific.

With a population of over four billion and 24 of the world’s 36 megacities, the region is a powerful economic engine, projected to generate 50 percent of global GDP and account for over 40 percent of global consumption by 2040. It’s also home to seven of the 10 largest militaries in the world and a focal point for U.S. security interests, from competitive threats to rogue actors, terrorist groups and numerous defence treaty partners.

Compounding the security challenge is the threat posed by climate change. The Ring of Fire in the basin of the Pacific Ocean is a constant reminder of the potential for massive natural disasters and large-scale humanitarian operations caused by cyclones, earthquakes, tsunamis and volcanic activity, all exacerbated by a changing climate.

While the substance of the American pivot has been more a continuation of previous policies under new names, for the U.S. Army it has meant a strengthened presence, including an increase in the scale of bilateral exercises and expanded areas of military cooperation.

All of which gives Major Mick Bioletti a unique vantage point. Since 2018, he has served as the Deputy Chief, Strategy and Operations, in the Security Cooperation Division of U.S. Army Pacific headquarters, part of U.S. Indo-Pacific Command at Fort Shafter, Hawaii.

“For a Canadian exchange officer to be brought into this headquarters and introduced to U.S. strategy and understand the linkages between operational and strategic objectives and operational means and tactical ways to achieve those objectives is a real privilege,” he observed.

Though the Canadian Army has a presence in Asia – Army Commander Lieutenant-General Wayne Eyre recently served as deputy commander of United Nations Command in Korea – the Indo-Pacific is not the central focus of force generation and preparation. While the Royal Canadian Navy is well established on the West Coast and, together with Royal Canadian Air Force, is a regular participant in Pacific exercises and a contributor to operations – in early October, HMCS Winnipeg and a CP-140 Aurora deployed on Operation Neon to monitor UN sanctions imposed against North Korea – the Army has been more oriented toward Eastern Europe, the Middle East and Africa.

Bioletti’s role is probably best understood as a form of defence diplomacy. His office is responsible for the development, coordination and integration of the policies, plans and programs that support security cooperation activities in the Indo-Pacific.

The U.S. shares mutual defence treaties with Australia, New Zealand, Japan, the Republic of Korea, the Philippines and Thailand, and is a defence partner with others such as India, Indonesia, Malaysia and Vietnam, countries with large militaries and the financial resources to “take a larger role exporting stability,” he explained. “They are not allies but they are partners with whom we want to increase engagement.”

The Security Cooperation Division (SCD) aims to strengthen those alliances and partnerships by improving interoperability and access, building trust, and increasing partner capacity. And the force behind that will to engage is substantial – U.S. Army Pacific (USARPAC) consists of around 100,000 soldiers. 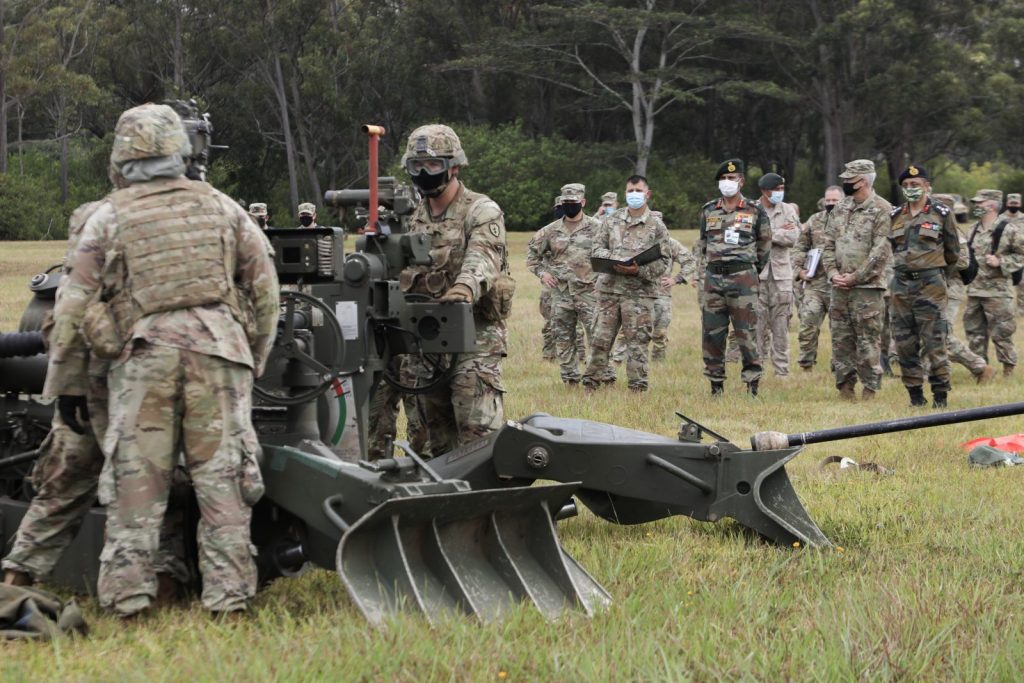 From a professional development standpoint, the position is “a fantastic learning opportunity to see how capability development works in an international setting,” he said. “You get exposure to U.S. foreign military sales; exposure to how coordination with the embassies occurs. You get to understand the priorities of various armies and their constraints and concerns. I’ve gained experience in security cooperation, coalition building, foreign military sales, and working with the Department of State and the Embassy teams in the region.”

The strength of the SCD is a large team of foreign area officers (FAO), a profession that rapidly expanded during the wars in Afghanistan and Iraq. Each FAO is a regionally focused expert in political-military operations and well versed in regional political dynamics and proficient in a regional language. The officers serve as program managers overseeing all security cooperation in their respective countries, working with and through embassy staff to deliver in-country programs.

“They are a conduit for information between U.S. Army Pacific and the Department of Defense working at the embassy in country,” said Bioletti.

That cooperation runs the gamut, from bilateral exercises to exchanges of subject matter experts to help build knowledge and capacity. One expert exchange involves disaster management with China. “It is the only major bilateral military engagement with China and it is run by the U.S. Army,” he observed. “It is not building Chinese capability, it is shaping their disaster management and making sure there are mechanisms so we reduce risk if ever China and the U.S. respond to a disaster.”

The Strategy and Operations branch is more the umbrella of the Division, taking a regional or theatre-wide view of all activities and initiatives. Bioletti will often represent SCD in staff functions that are not specific to a single country, where a regional initiative, for example, touches on several countries and planning requires a broader perspective. “We are coordinating efforts where we have to get several program managers to work together on a common regional initiative,” he explained.

In that role, he also serves as the lead planner for two major USARPAC working groups, Engagement Development and Security Cooperation, annual meetings to plan and prioritize funding allocation for the various country and regional initiatives. “That takes a lot of time because there are a lot of operational planning team meetings leading up to these events,” half of which are classified, he noted.

Bioletti is also involved in the management of several large, multilateral senior leader conferences each year, including the Indo-Pacific Armies Management Seminar, the Indo-Pacific Army Chiefs Conference, and USARPAC participation in the LANPAC symposium and exhibition, hosted annually by the Association of the United States Army (AUSA) in Hawaii. These conferences include bilateral meetings between army chiefs or their deputies that require a fair amount of coordination. 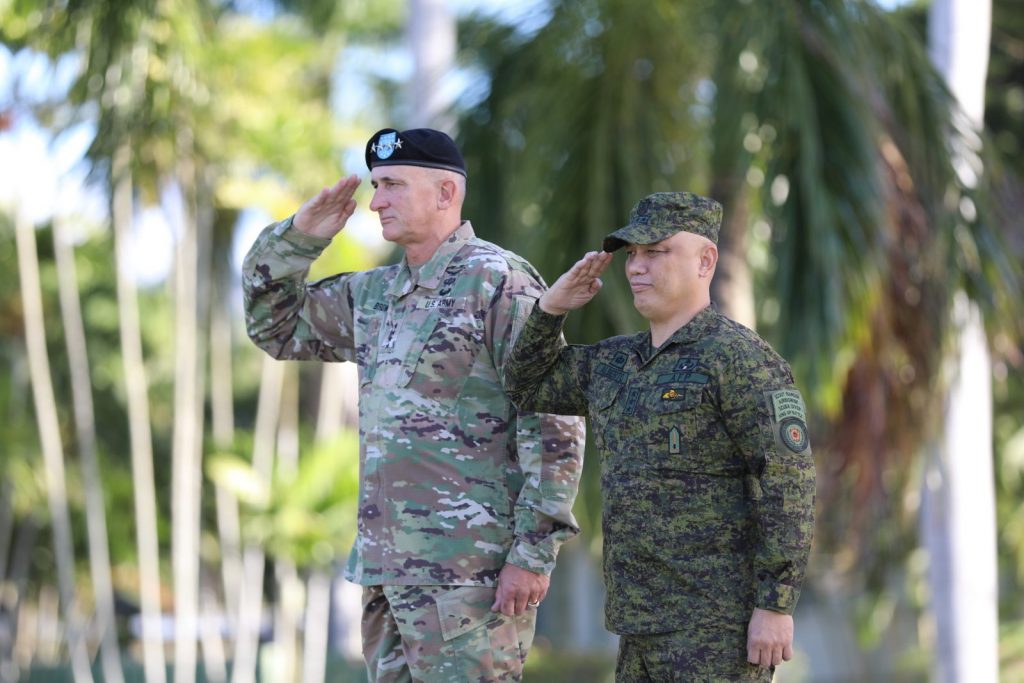 Sharing his acquired knowledge of the Indo-Pacific with the Canadian Army will have to wait until the three-year exchange concludes in 2021. But he is using the channels available to help inform the Director of Army Staff in Ottawa.

“I can’t send information to Canada, but since the U.S. Army is more willing to share with trusted partners, I have jumped on that and made sure we do share,” Bioletti said. “I’ve been pushing the envelope on the Engagement Development working group to maximize the amount of information we are authorized to share with allies and partners. Last year we shared classified information with Canada, the U.K., Australia, New Zealand, Japan and Korea. And this year we have been sharing all of the U.S. Army exercise concepts of operations and design for five-year plans with those partners.”

Not surprising given the overarching role of the Strategy and Operations branch, the posting can demand travel throughout the region to support bilateral executive steering groups and land force talks and ensure “bilateral activities are nested in regional objectives.” After two years of mastering the routine tasks, with duty travel to Bangladesh and Thailand in 2019, Bioletti had been scheduled to travel more in 2020. The coronavirus pandemic put a stop to that. But once COVID-19 restrictions are lifted, he expects to be on the road to meetings in Malaysia, Japan and several Pacific Island countries.

An infantry officer by trade, Bioletti was commissioned in 2005 and served in the Royal 22nd Regiment, a rarity for an anglophone officer at the time, eventually commanding a company in the 2nd Battalion. He completed tours in Bosnia, Afghanistan, the Democratic Republic of the Congo before attending the Joint Command and Staff Program at the Canadian Forces College in Toronto.

The officer exchange is a first for him and the Canadian Army. The opportunity with USARPAC opened up in 2018 and he admits he drove his career manager “crazy” trying to ensure the earliest possible start date. The fact that it meant relocating to Honolulu made it an easy sell to a more-than-enthusiastic family.

He’s jokingly played down the benefits to Canadian colleagues out of fear his next posting could be to Alert, Nunavut. But for his family, it has been a cultural experience more than anything. His daughter and son, ages 12 and 11, both attended French schools in Valcartier, Que., and are learning in English for the first time. “They have learned a lot about Hawaiian culture. They sing Hawaiian songs. My son surfs, I surf a little too. It is a cultural experience. Americans and Canadians are very similar, but Hawaii has its own Polynesian culture that is equivalent in a way to Canada’s northern people. It is a distinct culture within a larger American culture.”

The Canadian Army may not be as oriented to the Indo-Pacific as its American counterpart, but the exchange position could serve as means to building regional expertise. If nothing else, it is “essential for anybody who is interested in working in defence diplomacy in Canada, including as a defence attaché or working at an embassy or in policy. Or even in corporate Canada, in the arms industry,” said Bioletti. “The biggest advantage of this job is for professional development.”

And an officer doesn’t need to be in the role long to see how Canada could participate more in regional initiatives. Canadian niche capabilities from snipers, to forward observers and joint terminal attack controllers, precision fires, information operations, medical services, and engineering capabilities would all be of interest to regional allies and partners interested in subject matter expert exchanges.

“There are small-scale engagements where Canada can achieve leverage, especially with more niche capabilities, enabling capabilities,” he noted. There is also significant interest for demonstrations of joint approaches and capabilities. “A lot of the countries in the Pacific do not have that. They have competition between their branches. They don’t have the joint mindedness that Canada does. Demonstrating joint capabilities would be a big win for Canada. There is an appetite for that.”