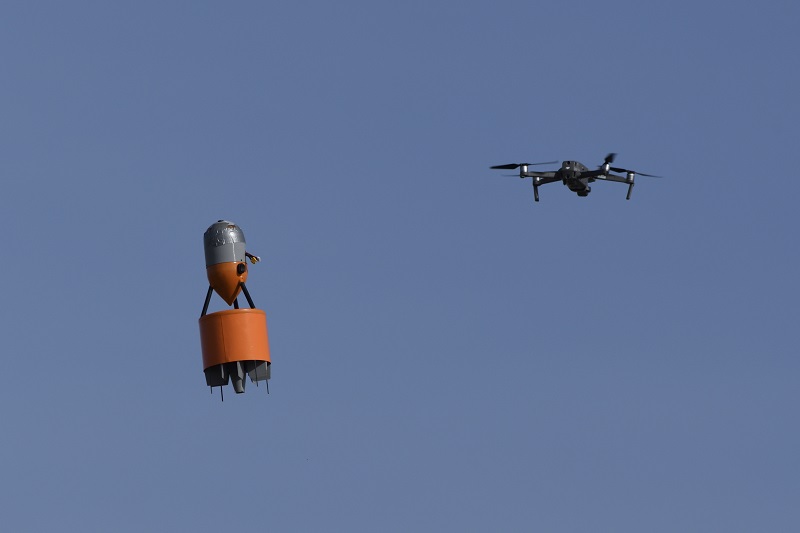 What’s the best way to detect and defeat mini and micro drones? In September 2019, the Innovation for Defence Excellence and Security (IDEaS) program hosted a sandbox challenge in Suffield, Alberta, to help answer that. They selected a dozen companies – Canadian and foreign, big and small – to demonstrate how they might identify, track and even destroy individual and swarming unmanned aerial systems (UAS).

The ubiquity of drones is a growing cause for concern. In December 2018, a drone sighting caused the closure of Gatwick Airport for more than two days, affecting 140,000 passengers and 1,000 flights. More recently, during the 2020 Nagorno-Karabakh conflict between Armenia and Azerbaijan, a multitude of UAS and loitering munitions destroyed Armenian armoured vehicles and air defence platforms.

“The range of potential threats is infinite. Counter UAS is not only a defense issue; it’s also a security issue,” acknowledged Eric Fournier, the director general of Science and Technology Strategic Decision Support for National Defence and the lead for IDEaS.

This October, IDEaS is going back to the sandbox to gauge how counter UAS technology has evolved and evaluate how well it can be integrated with Canadian Armed Forces command and control systems.

The 2019 challenge essentially asked participants two questions: Can you see and identify a small arial threat? And can you remove it or prevent it from doing its intended task? Over 20 companies applied and 12 were selected for a trial of up to five days during which they faced a red team of adversarial drones flown by Qinetiq Target Systems in a range of scenarios. They had immediate access to expert feedback from defence scientists and military partners such as the Army, Special Operations Forces, and other government agencies. Almost 300 test flights of around 3,770 minutes were conducted over 19 days.

There was a deliberate effort to invite companies with different approaches to the CUAS challenge, said Col (Ret’d) Tom Hughes, manager of sandboxes and test drives – another IDEaS tool that allows the program to buy small quantities of a technology on behalf of a service to then test and evaluate.

Although the ideal sandbox technology is at a readiness level (TRL) between six and nine, lower readiness levels were accepted to understand the current state and potential of CUAS. “We recognized that even if it might not be a great performer now, it was worth looking at because it might be a better performer five or 10 years down the road,” said Hughes.

In 2019, detect and defeat were two separate challenges, though companies were rewarded for solutions that could do both with integrated sensors and shooters. For 2022, detect and defeat are again the primary challenges, “but now we are asking, ‘can you give us a system that will be linked to our systems,’” said Fournier. “We want to be able to integrate it with our networks. It seems to be simple but it’s a very complex one.”

Combined detect/defeat solutions address part of that challenge. “What we have seen from other countries and what we saw there was that the single solution will be hard pressed to deliver. You may have multiple types of detectors, and, at the same time, those detectors could have multiple ways of engaging, depending on what is coming at you.”

Canadian UAVS was among the participants in the first sandbox with a ground-based radar system called Sparrow Hawk. The company operates UASs for defence and commercial customers and specializes in detecting and avoiding obstacles. The counter UAS problem “is almost the opposite side of the coin,” said vice-president John Molberg.

“Our radar is used to track larger objects. The sandbox trial was the first time trying to track drones and our first opportunity to get in front of potential customers just to get some feedback. Defence scientists there gave us a lot of insights on the type of radar we were using, how we might want to use it differently.”

At the time, Sparrow Hawk was around TRL 4; it has since evolved to TRL 9. But due to the volume of work with commercial customers, Molberg hasn’t decided yet if a return to the sandbox will further the technology’s development. He spoke highly of the process and the quality of the feedback during demonstration, but wished for “a little more focus on Canadian innovators.” The value for any small company, he noted, is being able to show your technology has been vetted when you apply for any grants.

The CUAS sandbox challenges, the first for IDEaS, are not tied to any specific procurement project, but there is a great deal of Army interest in the results. CUAS could apply to operational scenarios such as defending a forward operating base, a mobile vehicle force element or dismounted soldiers. Of particular interest are capabilities like passive detection, target recognition, locating and defeating ground control stations, defeating UAS swarms, and exploiting data from a target UAS.