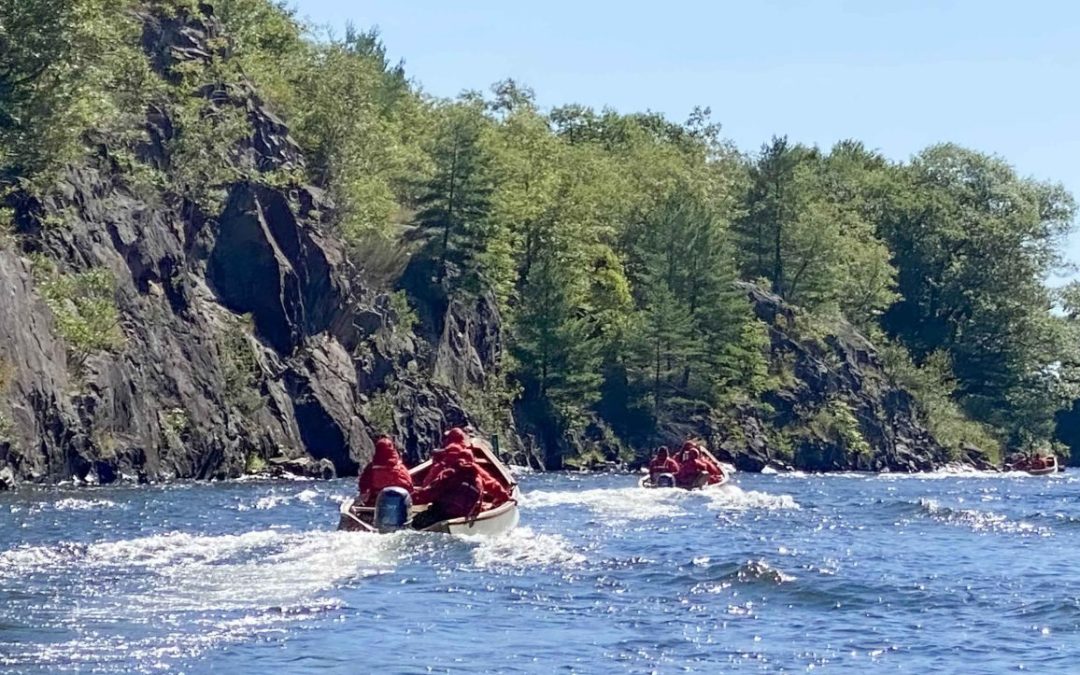 Talk about a study in contrast. The location is the Davis Lock, one of the prettiest spots on the Rideau Canal system. Boaters heading upstream approach the lock through a deep cut in the rock, passing by a frothing waterfall. Just past the lock, upstream in a small inlet, sits a few little docks. On this pleasant September evening, one spot is occupied by one of those houseboats that tourists rent during the summer to explore the canal – it’s essentially an aluminum trailer on pontoons. Right across from it on the same dock sits a large freighter canoe, painted a dull green and equipped with a powerful outboard motor. Nothing fancy about it, it’s all business.

You don’t expect that. Or the other eight similar canoes that are tied up here. But then, this isn’t where you’d expect to find the Canadian Rangers, either. Their turf, if you will, is the north – James Bay, the High Arctic, northern Quebec. Not this lush stretch of eastern Ontario waterway.

They’re travelling in these canoes from Parry Sound to Ottawa via the Trent Severn and Rideau Canal systems to mark the 75th anniversary of the founding of the Canadian Rangers back in 1947. Thirty-two members of the 3rd Canadian Ranger Patrol Group (3 CRPG) drawn from local units located in settlements on James and Hudson Bay and inland as well, along with Canadian Army elements from CFB Borden, left Parry Sound on Sept. 5 and will arrive in Ottawa 13 days later, on Sept. 17, where they’ll take part in a ceremony at the National Aboriginal Veterans Monument to mark the founding of the Rangers.

They’re camping here for the night, their little grey one-person tents scattered like mushrooms across the lawn next to the lock. No pleasure boater pulling in here would expect to arrive in what appears to be a military camp. But one thing you learn when you spend time with the Rangers: expect the unexpected. 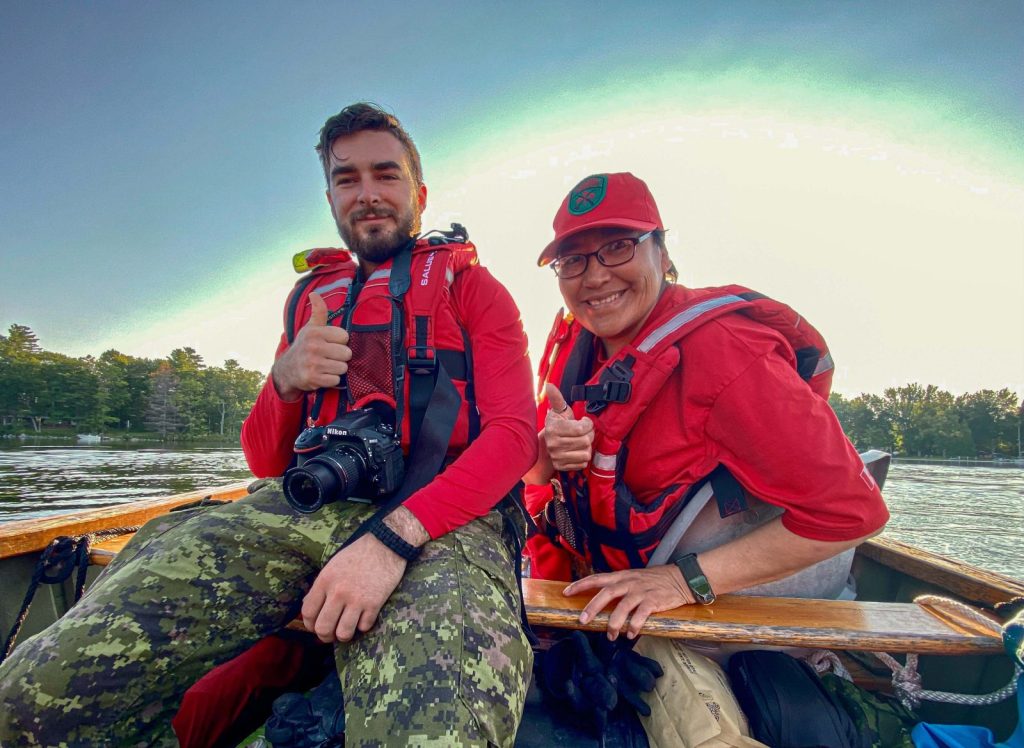 “I brought my sofa cushions,” says Sergeant Jocelyn “Jessie” Sutherland. We are hanging out on picnic benches beside the lock, waiting for dinner. As she explains why, you see the logic. The canoes that the Rangers are travelling in came from Fort Albany and Kashechewan First Nations, on James Bay. To get them far enough south that they could be loaded onto trucks at Calstock and driven the eight hours to Parry Sound, required motoring down the Albany, Kenogami and Kabinakagami rivers and on to Highway 11 – a 450-kilometer trip of five days’ duration. That alone, would probably merit a sofa cushion if all you were doing was sitting, but that wasn’t the case. Because the weather had been dry, the water was very shallow in places, as little as four inches deep, which meant getting in and out of the canoes repeatedly and dragging them through the shallows. Everyone ended up badly bruised, not least from scrambling in and out of the canoes. Sutherland developed her own technique for getting back into the boat – a sort of roll. In that case, it’s easy to imagine that the sofa cushion was really a necessity.

Sutherland, a child welfare manager at home and a master’s degree graduate of Ryerson (now Toronto Metropolitan) University, jumped at the chance to make the trip when she first heard about it. “I had to plan around it to participate because it’s difficult with my civilian job.” A 12-year veteran of the Rangers, she got involved when her own kids were part of the Junior Canadian Rangers.

The trip has been a lot easier since they left Parry Sound, she says. “Compared to the Albany River, we just sit. It’s relaxing.” Master Corporal Jason Hunter, from Peawanuck, says, “It’s fantastic. People will come out on their decks and say, ‘Hey what’s going on.’ We tell them and they say they’ve never heard of the Rangers. And we educate them about what we do.” 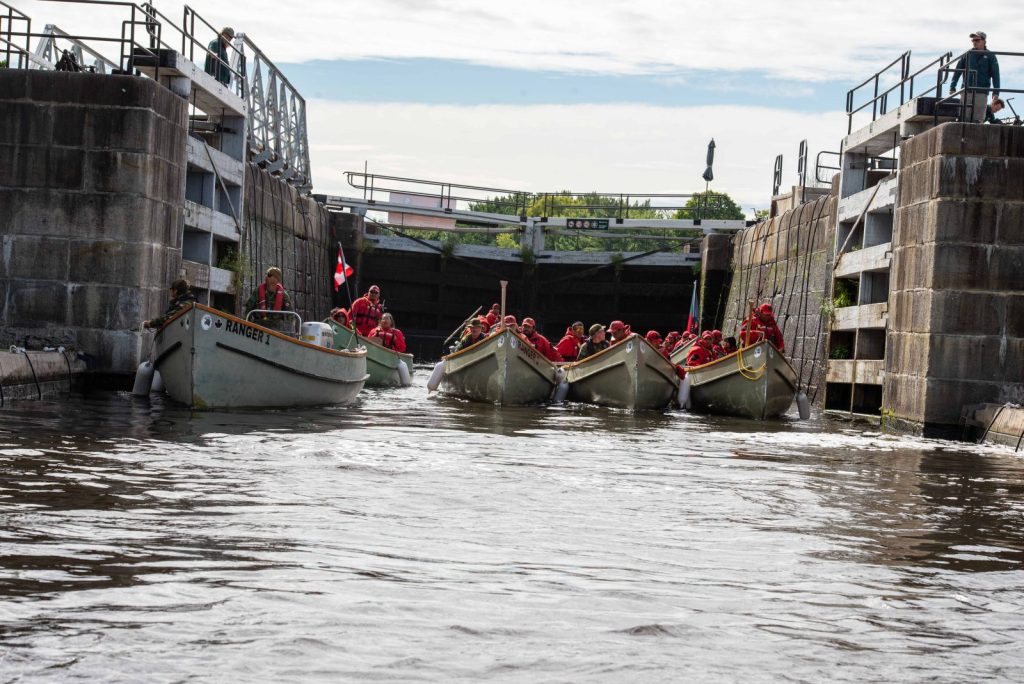 For sure, anyone in the south seeing the Rangers for the first time might be confused about what, exactly, they do and are. Their dress – red sweatshirts with the ranger logo, CADPAT pants and a red ball cap, looks sort of military, especially if you, like many civilians, are not quite sure what soldiers wear. And, at least with 3 CRPG, it’s easy to form the common misconception that everyone involved with the Rangers is Indigenous. All but one of the Rangers on this trek – although not their Army instructors – is either Cree or Ojibway. In the High Arctic there are many Inuit Rangers, as well. But that’s not a rule. Anyone who lives in a community that is home to a Ranger Patrol can join.

As to whether they are soldiers, that’s a little more complex. The various Ranger Patrols do follow a military set-up. Each of the five Patrol Groups is set up like an infantry battalion, broken down into companies, each company consisting of numerous platoon-sized patrols. Rangers take the same oath as other members of the Canadian Armed Forces. But there are big differences. There’s no requirement about universality of service. Says Major Charlie Ohlke, the commander of the 3 CRPG’s B Company, which covers the western half of Northern Ontario, “You serve your community in your community.” There is no requirement of basic training. “We regard a Ranger as fully trained upon enrollment. We go to them for their experience.” And while you need to be at least 18 to join, there is no retirement age.

They are armed – with the C-19, a custom bolt-action rifle that, says Ohlke, is intended for sustainment and protection – from polar bears as much as any imagined enemy. When the Army was developing .308 ammunition for the new rifle, says Ohlke, “We had two objectives. It had to pierce a polar bear skull through the polar bear’s hide,” but also bring down “a caribou without blowing the back out of it.” The C-19 is, he says, “a beautiful rifle.”

Back in the days of their founding in the late ‘40s, as the Cold War heated up, the Rangers’ primary task was to keep an eye on the remote regions of the Arctic, and to serve as guides for any Regular military units that needed to operate there. Today they can also provide ground search and rescue teams when someone goes missing. For the past two years, many of these Rangers have been employed full time (they are paid the same as Class B reservists) helping communities across the north deal with Covid. “One of the big things the Rangers can do is support command and control and organization,” he says. 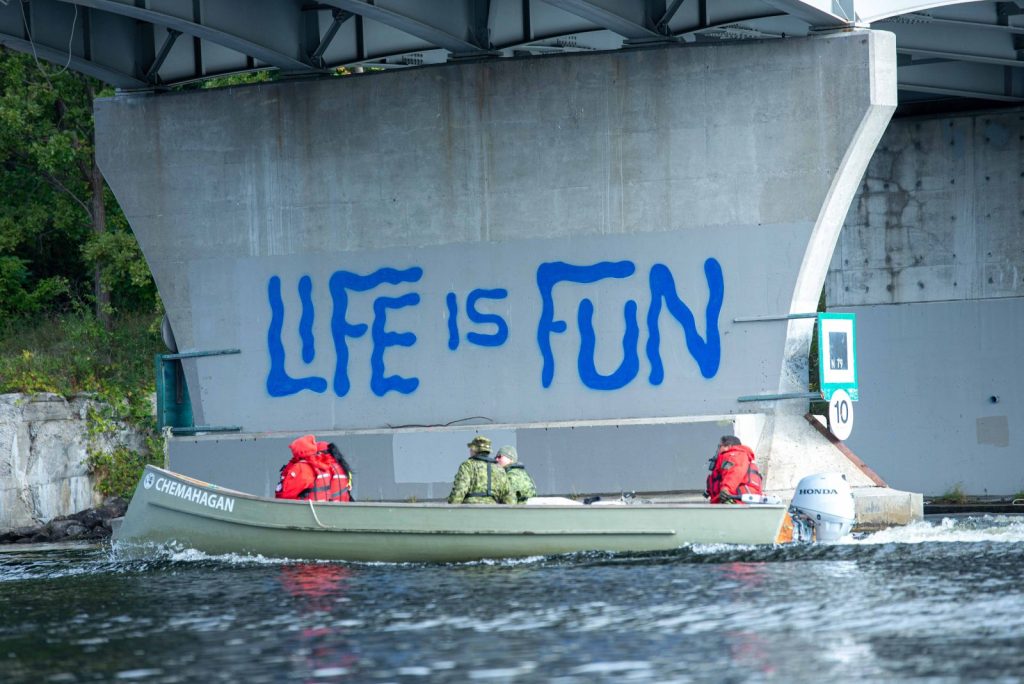 The Rangers may not receive basic training, but that doesn’t mean they aren’t highly trained. They learn search and rescue techniques, night navigation, first aid and tracking. The training work falls largely on the group’s cadre of Army NCOs. Master Warrant Officer Carl Wolfe is the company sergeant major for A Company. He began working with the Rangers in 2010, after a tour of Afghanistan, and for the ensuing 12 years his job was training the Rangers, a role that took him away from the group’s headquarters at CFB Borden for an average, he says, of 150 days a year, much of it travelling to fly-in communities that were home to Ranger Patrols. He became A Company’s CSM quite recently. “They said I’d be put at a desk, but it doesn’t seem to be working out that way.” Covid has turned everything upside down.

Their current trip might look purely like an exercise in showing the flag, so to speak, but they are still treating it like an exercise. At night, they work on their first aid, and motoring along the Trent Severn and Rideau Canal systems has given them plenty of opportunities to hone their boat handling skills. “Yesterday was quite interesting,” Wolfe says. Working on a body of water like this is very different from James Bay or the Albany River. “These guys have never had bumpers or lines or docks. They’re really good with currents and coming alongside beaches and rocks.” There are no buoys up there, no aid to navigation, and the river is constantly changing. 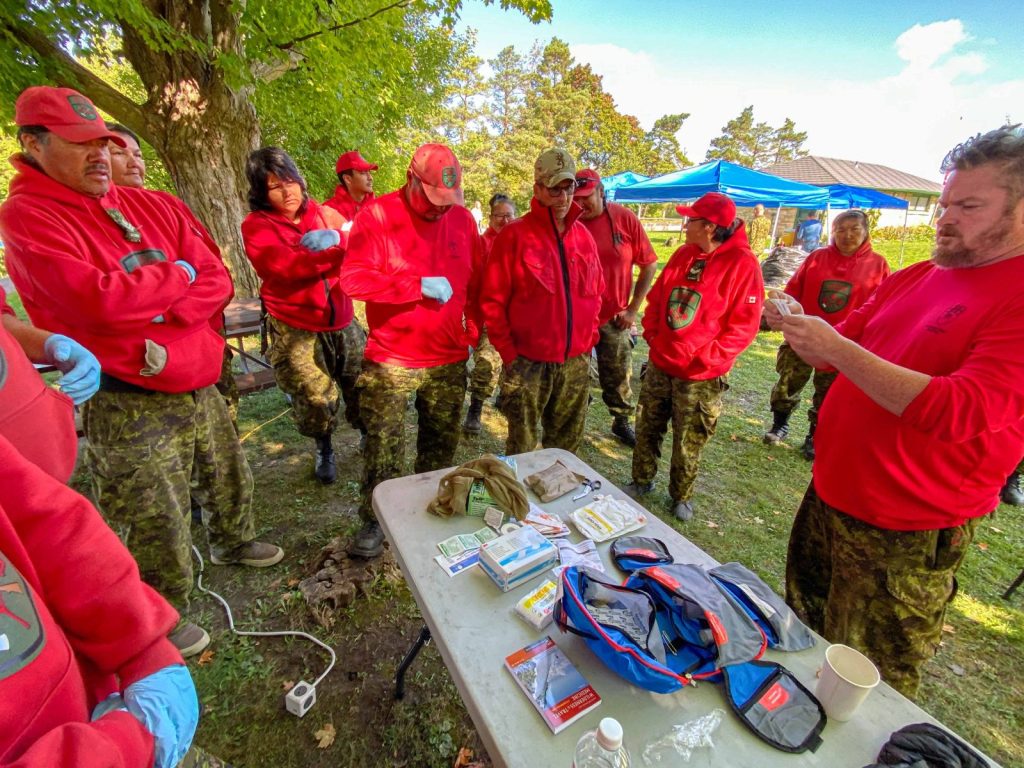 Ranger Wesley Redfern lifts an enormous black fiberglass box out of the bottom of his canoe. It’s his boat’s version of the safety kits that pleasure boats carry down south, but a considerably more serious version, as befits a craft that has to work on an enormous body of water like James Bay or up the sparsely populated Albany River. So, yes, there’s a throwing line, but there’s also a pair of binoculars, a battery charger, and more tools than a pleasure boater would ever consider necessary.

His is the oldest of the canoes here, and like the other Ranger craft, with the exception of the slightly fancier version with a central control console that is from headquarters at CFB Borden, is his personal property. They are all more or less identical – 24 feet long, with a 30 or 40 horsepower engine, wood framed and planked, then covered with canvas. They weigh about 600 pounds, which means that three or four people could push one over a sandbank in a river.

It’s hard to emphasize just how important these boats are to people who live on the shores of James and Hudson Bay. As George Edward, another Ranger who made the trek south with his boat, says, “It’s my life. In a world of no roads, we need them to travel, but more importantly, to fish and to hunt.” (I was repeatedly told that it was possible to pack five moose carcasses into one – cut up moose carcasses, but still.) These boats, MWO Wolfe told me, cost about $20,000, and these Rangers are not rich. So, it’s impressive that they are willing to put them at the service of the Rangers, their communities and really, all of us. Impressive – but for the Rangers not unexpected.