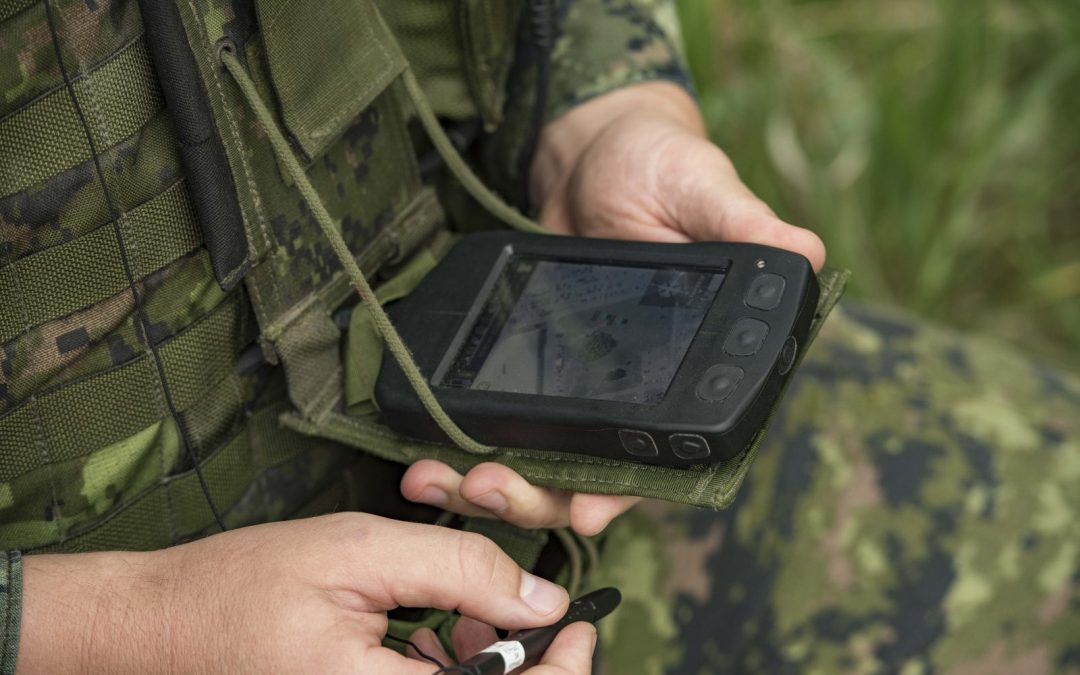 Upgraded software is planned for the Integrated Soldier System. A Canadian company is positioning to be its centre of excellence.

Arriving on the scene of an active shooter is one of the more perilous situations a police officer can face. Critical information is scattered, confusing and can take precious seconds to gather. That lack of comprehensive situational awareness can be fatal.

As with everything else these days, there’s an app for that.

Imagine instead a scenario where an officer has a more thorough picture even before he or she steps out of the vehicle. As they are driving, vital data points begin populating their tablet or phone: Icons on a map denoting the positions of fellow officers and vehicles, a possible location of the shooter, the size of the area that has been cordoned off, an initial command post. Maybe that’s followed by a social media grab of the shooter, a photo with enough detail to make the person readily identifiable. Video from an officer’s body camera or a sniper spotter scope is shared. Command instructions and further details, passed by text and voice, are layered onto the screen.

Until recently, that would have been difficult to achieve. While there is no shortage of systems capable of collecting each of those data points, fusing the information in an accessible format has been a challenge. Systems standards and proprietary intellectual property have limited how easily secure devices can communicate and share.

A U.S. government-owned application for smartphones, called Android Team Awareness Kit (ATAK), is rapidly changing how military and first responder agencies collaborate. And the software will soon be added to the Canadian Army’s Integrated Soldier System Suite (ISSS), a tactical computer system, radio, and push-to-talk headphone, cabled together through a hub on a load carriage vest.

The ISSS is networking soldiers at the tactical level with a smartphone-like display for better navigation, blue force tracking, mission planning and orders dissemination, among other tasks. To stay current with swiftly evolving technology, the Army is delivering the system in three cycles. The first provided the equipment and baseline software. The second cycle, now underway, will integrate the ISSS with the Army’s digital backbone, the Land Command Support System, as well as improve radios and integrate new range finders. The third will upgrade software, including the addition of ATAK.

“Where the U.S. goes, NATO generally follows, and it is prudent to be interoperable with our largest ally,” a senior officer with the Directorate of Land Requirements (DLR) told the Army Outlook in April. Studies by Defence Research and Development Canada have shown the ISSS capability can dramatically improve the “speed and accuracy with which these tasks can be completed. This is a major step forward for our dismounted soldiers.”

The Department of Homeland Security’s Science and Technology Directorate first trialed ATAK after Hurricane Harvey tore through Texas in August 2017 to support communication and coordination among multi-jurisdictional responders. It was deployed again in September when Hurricane Irma struck Florida and Hurricane Maria shattered Puerto Rico.

While a freeware version is available to users of newer Android phones like the Samsung S-20, establishing and maintaining a secure ATAK-based network and/or being able to have certain devices integrated with ATAK requires specialized engineering services. A small Ottawa-based defence technology company is addressing that.

KWESST Micro Systems, a four-year-old start-up founded by Jeff MacLeod, a former Royal Canadian Electrical and Mechanical Engineer officer, is one of just a handful of companies, and the only Canadian one, to receive authorization by the U.S. Department of Defense to develop military ATAK plug-ins. Authorization was granted over a year ago when the U.S. Marine Corps Warfighting Laboratory requested the company integrate ATAK into a proprietary integrated fires module (IFM) product KWESST was designing for 81mm mortar platoons.

The IFM product suite connects weapons that have not previously been part of the command network to the tactical internet, sometimes referred to as the military Internet of Things.

In response to the growing utility of ATAK among military, public safety and first responder organizations, KWESST has positioned itself as an ATAK centre of excellence in Canada. “We recognized that if we played our cards right and were first to market, we could be the guys in Canada that can support and develop ATAK solutions,” said Rick Bowes, a former armour officer and vice president of operations.

The active shooter scenario described above was demonstrated by KWESST to a Canadian police force in August. Improving real-time shared situational awareness among police and other first responders is the key to operational effectiveness and interoperability during high-risk scenarios, he noted. The company is now discussing the implementation of a prototype proof-of-concept project with a Canadian police force.

Because it is network agnostic, if cell service is knocked out ATAK, can still operate with other communications devices such as radios or satellite communications. “That makes it a great application for organizations like provincial wildfire services who are often operating in mountain valleys where there is no cell service,” said Bowes. “With ATAK-equipped firefighting teams, risks associated with loss of communications and situational awareness are greatly reduced.”

All this positions KWESST well when it comes to the Army’s aspirations for Land C4ISR capability development over the next few years. With confirmation by DLR staff that the Android Team Awareness Kit will be part of the evolution of the ISSS, ATAK likely becomes an underlying building block when architecting solutions for Joint Fires Modernization, TacC2IS Modernization, and TacComms Modernization.

KWESST’s knowledge and experience developing and integrating ATAK-based network and IFM solutions within a larger command-and-control architecture allows the company to “propose a unique and differentiated set of offerings particularly suited to the dismounted operating domain,” said Bowes.