Carl Gustaf and M72 replacements: More of the same? 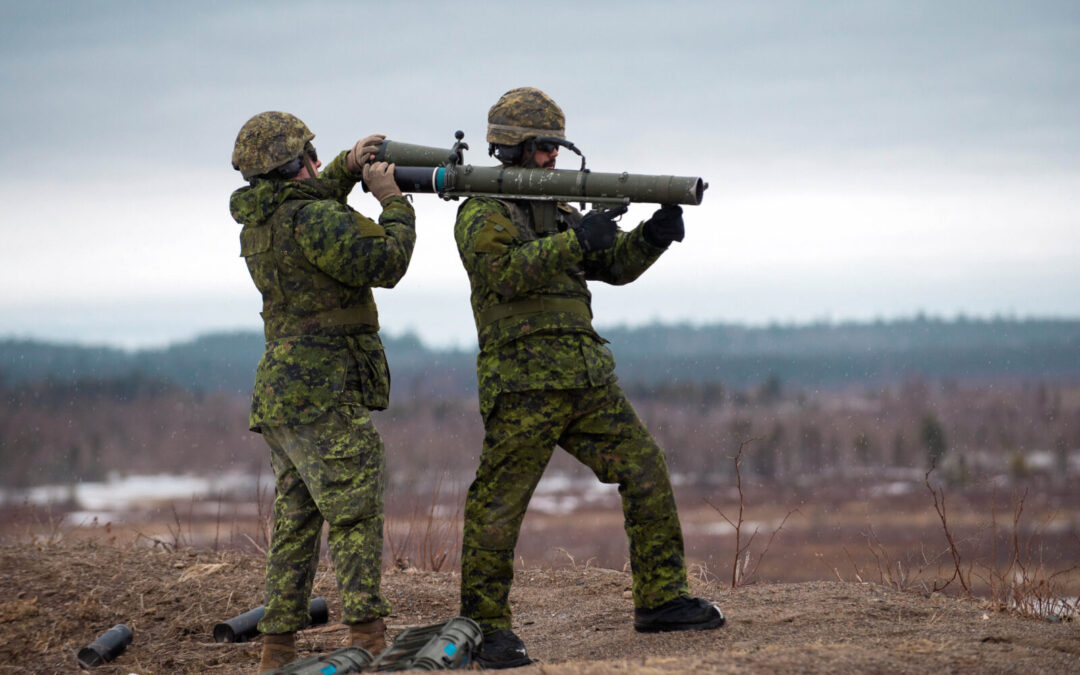 The brutal effectiveness of portable missile launchers against armoured vehicles has been graphically proven in Ukraine’s resistance to Russia’s invasion almost from the day it began last February. Gutted by Ukrainian troops using mostly munitions donated by Canada and other countries, hundreds of main battle tanks (MBTs) litter roads and highways like so many giant beetle carcasses.

Russian losses were staggering even before Ukraine mounted twin counter offensives in the eastern regions bordering Russia this fall. Western analysts say 1,392 tanks had been attacked by mid-October, 801 of which were destroyed. An average of 10 a day were being destroyed at one point compared with two a day on the Ukrainian side.

The loss of relatively modern T-72, T-80 and T-90 MBTs as well as thousands of armoured personnel carriers compelled Russia to deploy older T-62 MBTs out of storage. The later platforms were essentially evolutions of the decades-old T-62s with the same tactical vulnerability: Internal ammunition storage which resulted in spectacular “Jack in the box” explosions caused by shoulder-launched missiles.

While it’s impossible at this juncture to say precisely how much of that element of the Ukrainian arsenal involved Canada’s donations of two types of portable missile systems, they have inarguably been a key factor together with similar weapons donated by Britain, the United States and other allies.

Russia’s “special military operation” was only days old when Canada confirmed that it had donated “at least” 100 Carl Gustaf M2 line-of-sight recoilless rifles made by Saab Bofors Dynamics in Sweden. In service with the Canadian Army since the mid-1960s, the reloadable M2 system is used by Reserve units while newer and slightly lighter M3s are employed by the Regular forces. A disposable single-shot smooth-bore A4 variant developed in 1984 is used by Canadian Special Operations Forces and an even lighter M4, which can be carried with a round loaded, has been available since 2014.

The M2s were shipped to Ukraine with 2,000 rounds of 84-millimetre ammunition. Canada’s combat inventory includes high-explosive anti-tank (HEAT) rounds with an effective range of 700 metres and “dual-purpose” rounds, which can destroy fortified positions out to 500m. The M4 can hit stationary targets at up to 1.2 kilometres, but there’s talk of pushing its range to 2km.

At the same time, Canada shipped some 4,500 M72A5-C1 rocket launchers, also line-of-sight weapons. Now manufactured in the U.S., Norway and Turkey, the M72 has been in Canadian Army service since the late 1960s. A simpler single-shot disposable short-range weapon, it fires a 66mm shaped-charge warhead capable of penetrating up to 35 centimetres of armour.

The Department of National Defence (DND)  is understandably reticent about how many of those weapons and their ammunition remain in inventory, but a paper published by the Canadian Forces College in 2016 stated that the Army had approximately 1,100 Carl Gustafs in service. DND would only say that while there is “enough ammunition stock” and it is “working closely with industry and with our partners at Public Services and Procurement Canada . . . to examine options to replenish our stocks.”

The Army has had a replacement project in its recapitalization plans for several years, augmenting it with a recent proposal for a new multi-purpose, anti-armour and anti-structure, portable and mounted weapon system (see the Spring 2022 issue for more on the project). Since development costs of that kind of weapon can easily run into the hundreds of millions of dollars, procurement of an existing system would be the most cost-effective approach for the Army. 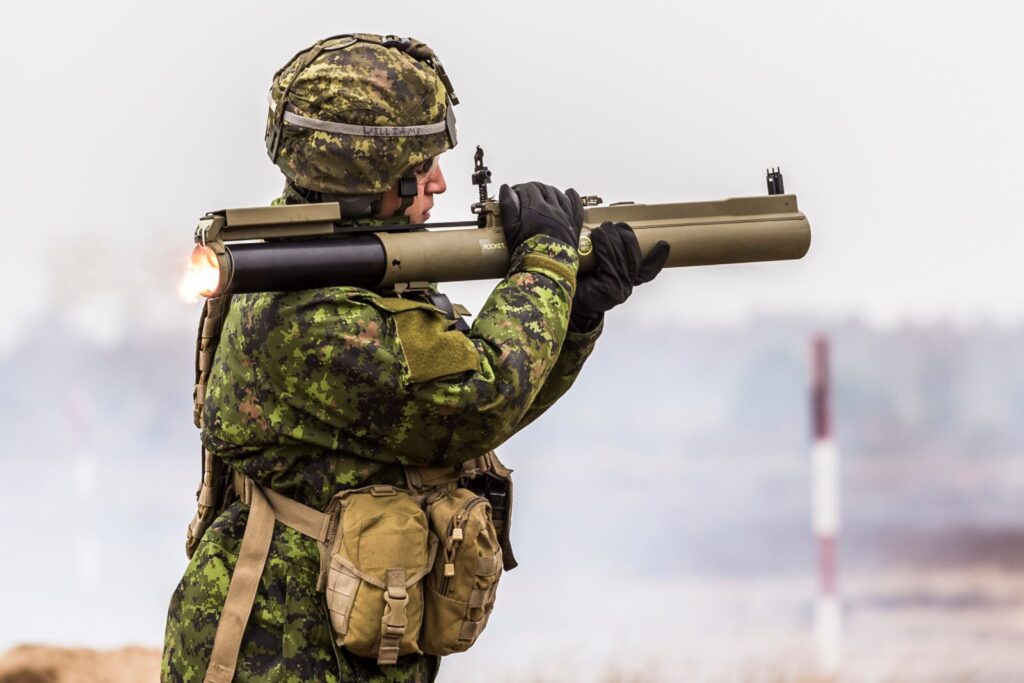 That begs the question: What could replace the Carl Gustafs and M72s if the Army is to retain both short- and medium-range capabilities? (Long-range attacks up to 30 kilometres are delivered in part by the 155mm M777 towed howitzers; Canada has donated several to Ukrainian with great effect.)

DND spokesperson Jessica Lamirande confirmed in late October that the Army plans to replace the M72s and the Carl Gustaf systems and their munitions – as well as the howitzers, hand grenades, demining equipment and thousands of .338mm Lapua Magnum rounds of ammunition for the undisclosed number of medium-range C-14 Timberwolf sniper rifles supplied by PGW Defence Technologies of Winnipeg in 2005.

Neither the rifles nor the howitzers will be coming back. The Army has begun to take delivery of more modern sniper rifles (see p XX) but the big guns are no longer manufactured by BAE Systems.

“Plans to replace some of the more recent donations are still being developed,” said Lamirande. “Some of this equipment will be acquired through the Munition Supply Program (MSP), others through the regular procurement process. Some of the ammunition will also be replaced as part of the annual replenishment process under the MSP, by increasing our order amount over the next 24-48 months. Given the Carl Gustaf M2 model is now obsolete, we’ll be looking at developing the acquisition solution for the M4 (and) plans are to replace all other equipment with the same models.”

DND was still “exploring options” for new howitzers. Lamirande said those include standing up a new project for a full replacement, exploring the market for surplus M777s, which BAE also sold to allies such as Australia and the U.S., or potentially buying a new capability.

BAE Systems is considering restarting production of the M777 howitzer. BAE said if inquiries from the U.S. and Central European countries translate into orders, it could lead to production of 500 new guns. But restarting the full production could take 30 to 36 months. Mark Signorelli, BAE’s vice-president of business development, told The Wall Street Journal that the company needs an order of at least 150 to reboot production “profitably.”

The M4 is a “the Swiss Army Knife of weapons, the multi-tool you always want to have on hand,” Sierra Fullerton, a Saab spokesperson, said in response to a request for details about potential options for the Army. The Carl Gustaf system “remains a key tool in the ground combat arsenal” and Saab continues “to support [Canada] in ensuring the armed forces have the equipment and munitions required.”

The weapon’s ease of use is one of its biggest strengths, she agreed. “It is also highly portable and provides great flexibility with a large number of different munitions for different use cases.”

As for the Army’s financial bottom line, familiarity with the “Carl G” means it will not require time-consuming and expensive retraining. There’s also its “backwards compatibility with the legacy models,” she pointed out. “We believe its continued popularity is a testament to the ongoing relevance and reliability.” The M4 is half the weight of the M2, and it supports intelligent fire control and programmable ammunition.

There are other options capable of hitting air and ground targets at far greater ranges, but it’s apparent DND also believes that sticking with tried-and-true equipment, including the M72, is the preferable solution.