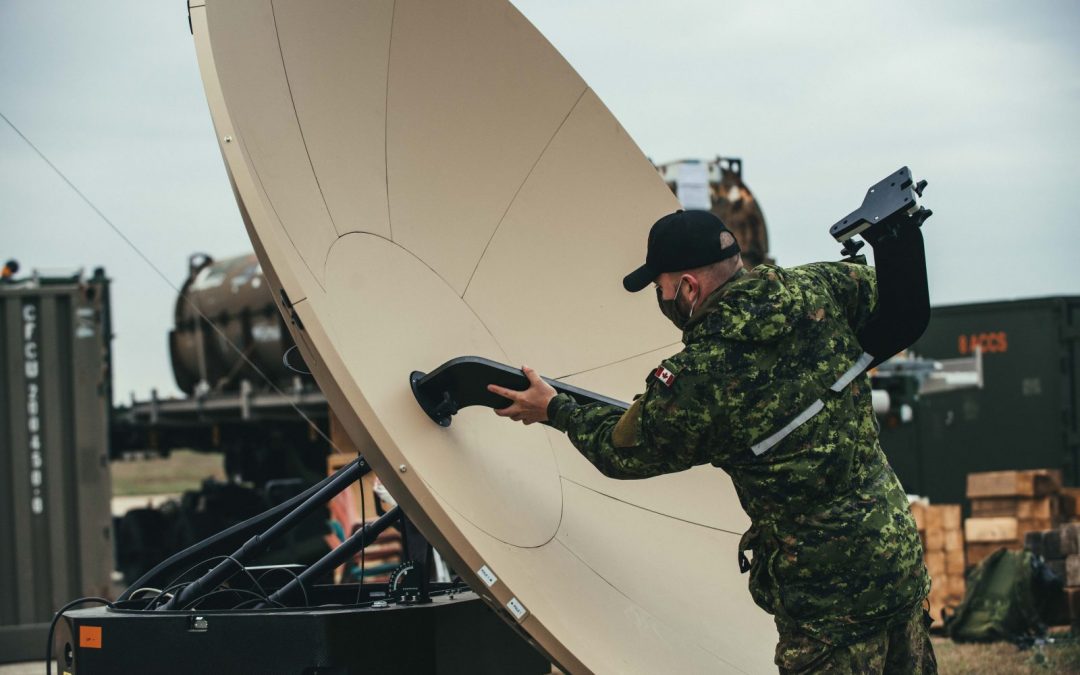 Call it a paradox of digital transformation. At a time when the Canadian Army seeks to digitize enterprise and operational practices, network sensors, shooters and command nodes to a unified digital backbone, and stream vast arrays of data to inform decision making, the strength of the Army’s Signals Corps is low and at risk of becoming even weaker.

Among Army trades, Signals occupations are considered the most distressed. At present, the Royal Canadian Corps of Signals is at 70 percent effective strength. Nearly 20 percent of that loss occurred in the past eight years and long-range prediction models by Military Personnel Command suggest another 20 percent could be lost before the Corps achieves equilibrium. Recruit intake will not match demand anytime soon. Yet the trade is expected to provide the very people needed to sustain that digital backbone.

The staffing crisis has unfolded even as the complexity of the capabilities Signals Operators are expected to develop, maintain and operate has increased. More problematic, the Corps can see a tsunami of emerging technology, from artificial intelligence (AI) to deep machine learning and data analytics, approaching and is starting to brace for impact, admitted Lieutenant-Colonel Bahir Ali, Commandant of the Canadian Forces School of Communications and Electronics (CFSCE).

One of the challenges today for the Signals Corps, and a cause for some of the complexity, is the lack of a unified digital network in which to plug in new capabilities. Though the Army talks of the Land Command Support System as a backbone, there are in fact multiple variants of the LCSS. Ali can count at least nine, all purpose-built to support different mission sets.

“We have built a system and every time we have a different operation, we copy/paste that system,” he said. “We will rebuild it and employ it for that specific operation. And that creates a strain on the Signals Corps.”

Over the years, the Army has built LCSS networks for domestic operations, Canadian Joint Operations Command missions, coalition operations, Canada-U.S. intelligence sharing tools, training and simulation – the actual number fluctuates depending on demand, he explained. “We will engineer a new network in support of a specific activity.” In addition, the Army has corporate networks for institutional functions and the gateways connecting the operational and the corporate are limited.

“We talk about digital transformation quite a bit, but we need to start thinking first about the digital backbone,” Ali argued. “That backbone is needed to enable innovation and the Army’s digital transformation. But we tend to design our networks and develop network capability in the Canadian Armed Forces in a stovepipe manner. We realize we need to bring some of this together and start thinking about joint Communications and Information Systems (CIS). Otherwise, we end up splintering the network into too many segments and then won’t have the workforce to manage it all. So, we need to be clever in the way we implement the digital backbone.”

That begins with achieving what he called “technological focus.” Because the Signals Corps is spread thin and struggles with the “overwhelming complexity” of the technology it is responsible for, it has had little time to focus on “adopting new technologies and rapidly engineering new solutions by using existing capabilities.”

Dealing with technological complexity will remain a constant, but the Corps could be more agile and creative with how it is structured, he suggested.

“I’ve had people tell me, ‘Why can’t an Army radio be as simple as my cell phone?’ The reality is that there is tremendous complexity behind a cell phone. There are tens of thousands of people supporting the infrastructure that cell phone relies on. We just don’t see that complexity. It is far removed and managed by someone else. I think the same can be true for the Army. Maybe there’s an opportunity to remove some of this complexity from the tactical edge and put it somewhere else.”

But first the Signals Corps needs to rethink how it attracts, develops and retains its people. 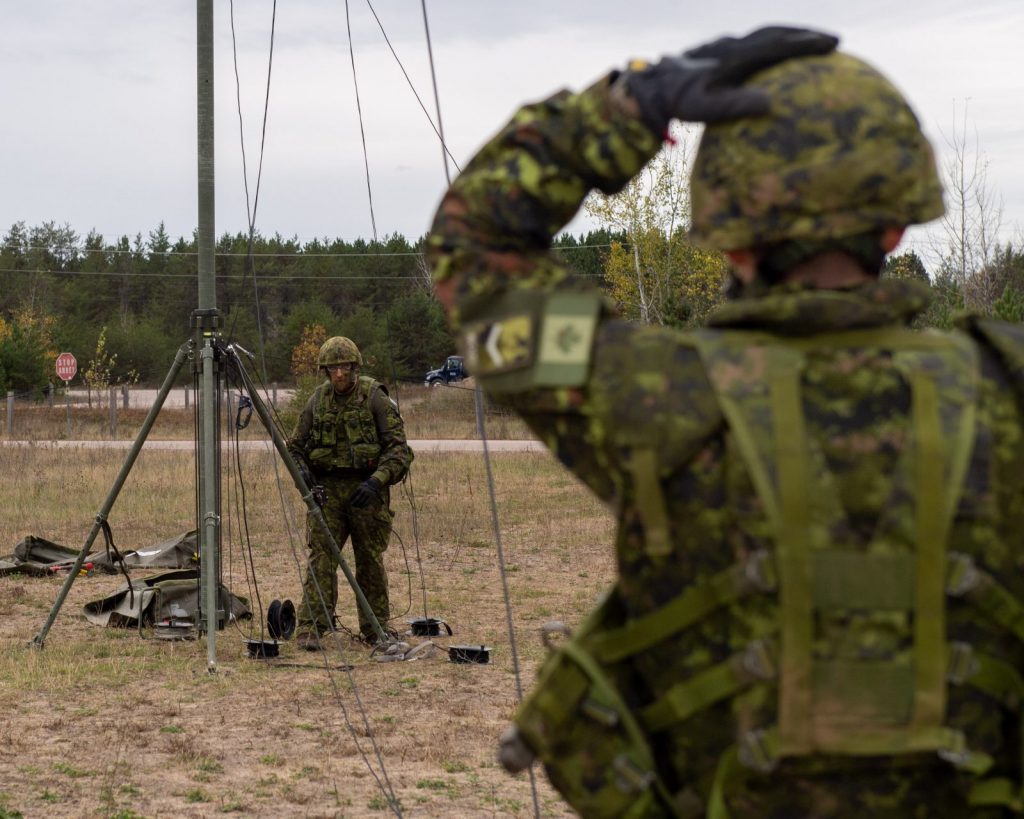 Before assuming command of CFSCE, Ali spent two years at Army headquarters under Director Land Command and Information (DLCI) examining the recruiting and retention conundrum. The Signals Corps has made an art of doing more with less, but that’s not sustainable, he admitted.

Finding technological efficiencies and challenging how the Corps does business might alleviate some of the strain and generate new ways to achieve similar effects with less people. But the Corps will also need to reorganize its structure. DLCI research found 46 percent of Signals Operators are employed in organizations outside the Army. Could Reserve members, civilian employees and/or contractors assume more of the non-tactical roles? “The Army is looking at that as part of Force 2025 to match supply to demand,” said Ali, a former Signal Squadron Commander in Joint Task Force 2.

During 3rd Canadian Division’s high readiness training in 2020-2021, the Signals Corps trialed a possible structural change, centralizing Information Systems (IS) technicians to deploy and manage the LCSS. Called Task Force Hermes, the initiative pulled together IS techs from across various units to concentrate the response to LCSS problems, rather than in piecemeal actions.

“One of the more complex tasks a brigade Signals squadron has is to deploy its LCSS servers – only a handful of people in each of the brigades are able to perform that function,” he explained. “We proved we can take a lot of the systems management functions that are currently provided within the brigades and centralize them under an Army Signals element that can provide those services remotely. By putting them all together, we were able to achieve more with less. The results also are informing Force 2025.”

Among other possible structural changes, the Army has debated centralizing a specialized unit under the Canadian Combat Support Brigade to provide enterprise networks at the division level.

Rather than generalists, it may be time to redefine Signals Operators as tactical specialists and divest some tasks to other trades or industry. Could certain infrastructure responsibilities – think the military equivalent of cloud computing services – be assumed by industry so “we can focus on the things we can realistically train on and provide enough soldiers for?” speculated Ali, who deployed to Afghanistan in 2007 as the Battle Group Signals Office and to Iraq in 2019 as the NATO embedded training and advisory team lead at the Iraqi School of Military Communications.

App developers, he noted, tend to not worry about the backend of data centres, servers, enterprise network routing or gateways. Could those functions be moved to the rear rather than the tactical edge where most LCSS structures, from servers to services, currently reside with field units?

Or could the Army Reserve take on more roles? The Strengthening the Army Reserve (StAR) initiative launched in June 2016 has established mission tasks such as cyber protection and electronic warfare in Reserve Signals regiments. “It may not be realistic to think the Army Reserve can generate the same level of capability as predictably as the Regular Force can,” he noted, “but there is a lot of talent there and we need to recognize that and see what we can employ.”

Ultimately, the responsibility for building capacity falls to CFSCE. The Army is unlikely to attract experienced IT professionals from civilian jobs, so the school must develop the initial skills and provide challenging and rewarding career-long development that can meet demand and match technological change. CFSCE provides training for 10 officer and non-commissioned member (NCM) occupations for the Communications and Electronics Branch, including one officer and four NCM trades for the Army. As the complexity of tasks and the specialization of occupations has increased, so too has the length of training – the entry level program for Signal Operators has gone from 70 to 120 days – and the overall standards.

As worrisome as the numbers are – “even if you maximize recruiting, maximize training production, you will probably never get to the levels that our establishment plans for,” he noted – there are reasons to be excited about being in today’s Signals Corps. Army initiatives like digital transformation and the development of more robust C4ISR promise recruits an opportunity to work at the leading edge of technology.

“We have an aspiration to do things that are the bleeding edge in this domain,” Ali said. “I think this should attract talent. We need to advertise this, explain what we are working on, and the types of wicked problems we are having to reflect on.” 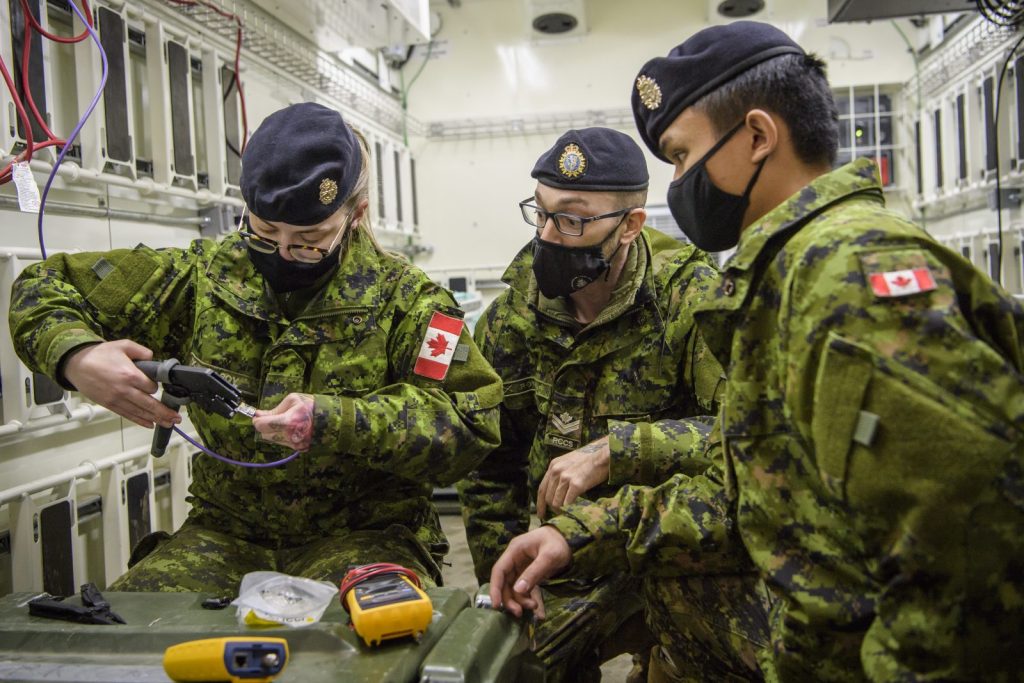 That tsunami of disruptive technologies looming on the Signals Corps’ horizon includes AI, block chain and the business intelligence functions of data mining, process analysis and descriptive analytics. All have the potential to reshape doctrine, structures, and how the Corps operates. Understanding how best to adopt, employ and train them is an essential aspect of achieving technological focus.

“This is also about evolving our training to meet future demand. We really need to understand the intersection between the demand for emerging technology and the Signals Corps’ demand for training,” said Ali. “We need to figure out where those two intersect to ensure our training is relevant to the challenges of today, and tomorrow.”

Increasingly, decision makers at the “tactical, operational and strategic levels are demanding to be enabled by the capabilities that make up that tsunami,” he noted. With corporate systems and almost “every piece of equipment in our arsenal generating data today,” commanders are asking to accelerate the decision-making process. The technical backbone to enable that, however, “is becoming quite complex with the explosion of data sources, so we are having to evolve it very quickly while ensuring it is secure and interoperable with our partners and allies.”

Yet the Signals Corps still needs to ensure the digital environment for the Army to innovate. Uber didn’t transform the taxi industry without all the necessary infrastructure already being placed, he added. “Our role is an increasingly critical one to enable the Army’s digital transformation.”