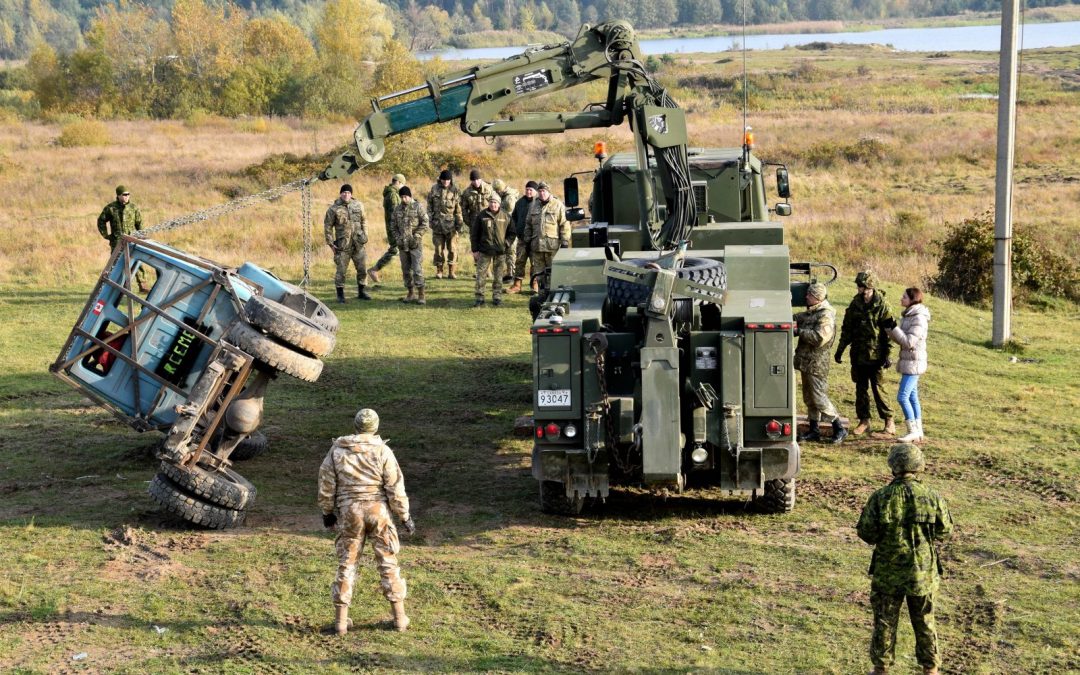 Whether helping with civil disaster management at home or overseas on a combat mission, the Canadian Army has a daunting challenge when it comes to recovering damaged vehicles, despite having about 130 platforms designed specifically for the role.

The current fleet of triple-axle Heavy Logistic Vehicle Wheeled (HLVW) trucks has been doing yeoman service for nearly a third of a century, but many of the Canadian Armed Force’s (CAF) fleets of armoured and other vehicles have evolved since the 1980s, growing in size and weight, and are now beyond the capabilities of the “wrecker” variant of the HLVWs.

Major Robert Greer, the project director for Enhanced Recovery Capability (ERC), chuckled when asked if the legacy fleet had simply been “used and abused” over the years, often in severe environments.

“They’ve been fully depleting themselves,” agreed the member of the Corps of Royal Canadian Electrical and Mechanical Engineers (RCEME).

The CAF is in the process of replacing all logistic vehicle fleets with new wheeled armoured vehicles that are larger and heavier, to accommodate the weight of armour protection kit (APK) while simultaneously improving mobility and payload capacity. The CAF is also making much greater use of intermodal shipping containers and mobile shelters, based on the ISO shipping container footprint, to move materiel and provide a range of workspaces such as command posts, medical facilities and workshops. As the heavier wheeled vehicles are introduced into service over the next five to seven years, the existing tow trucks will only be able to winch and tow 54 percent of the fleet and will not be able to lift the bulk cargo containers during a recovery operation.

Through qualified supplier engagements and technical studies, the ERC project requirements have evolved from a single variant solution to ideally two variants: a four-axle 8×8 and a five-axle 10×10, said Greer. “Unlike the HLVW with add-on armour, both variants of the ERC will have the ability to enhance crew protection, swappable armoured cabs or some protection add-on armour for deployment into high-risk areas.”

The five-axle vehicle will have a rotator boom capable of handling complex recoveries and 20-foot sea containers, which can weigh as much as 16 tonnes when fully kitted as workshops or command posts. The need for a boom was confirmed at the outset of the project, particularly when recovery involved a vehicle damaged by an improvised explosive device (IED) or a rollover. “It would have been instrumental in Afghanistan for some situations such as where we had narrow roads and the vehicle to be recovered was in a ditch,” Greer noted.

The ERC project is essentially a “one-for-one” replacement of approximately 130 or so vehicles, including up to 30 armoured cabs. They will be stationed with 79 units across 33 Army, Air Force and Reserve bases nationwide. “Because of the size of these vehicles, there are limits on where we can base them,” said Greer. Reserve units likely would be assigned the smaller 8x8s.

As for overseas deployment, marine transport is one option. Rapid response, however, means air transport will be a mandatory requirement for the vehicles that could end up weighing “at least 30 tonnes, and up to the high 40s.” Some 10x10s on the market are even heavier. The RCAF’s fleet of five Boeing CC-177 Globemaster IIIs are capable of the task, he added.

At present, the ERC will require space for a crew of two, but Greer said a third seat would be “nice to have.” In the RCEME world, the two-person crew is comprised of a driver, the crew chief, who is in overall charge of a recovery, and a “swamper” responsible for running lifting cables to the disabled vehicle and setting up a safe operating perimeter. A third crewmember arguably affords some flexibility and possibly added safety in complex recoveries. 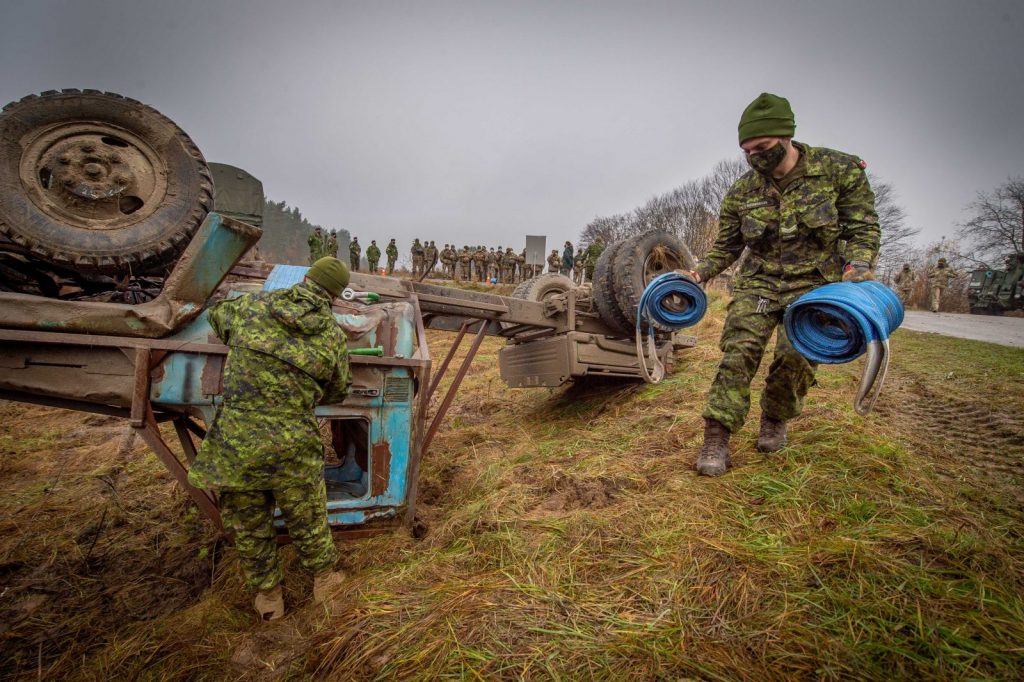 The procurement process began in April 2017 with a letter of interest (LOI). Feedback from manufacturers resulted in a second LOI in March 2019 and, combined with industry days and one-on-one sessions, has helped ensure what Greer called “a shared understanding” of the project.

Following a formal invitation to qualify (ITQ) in August 2019, and a revised ITQ in November 2019, the project has a list of qualified suppliers that includes London, Ont.-based General Dynamics Land Systems – Canada, which has built hundreds of Light Armoured Vehicles for the Army; well-known North American manufacturers Navistar Defense Canada and Oshkosh Defense Canada, both subsidiaries of American parent corporations; and European-based entrants Rheinmetall Canada Inc. of Saint-Jean-sur-Richelieu, Que., a subsidiary of the German defence giant headquartered in Düsseldorf, and Iveco Defence Vehicles, headquartered in Italy, but owned by CNH Industrial, an Italian-American corporation with head offices in Britain. Rangler Manufacturing, a Calgary-based supplier of large vehicles for the Alberta petroleum sector, has also been added to the roster.

“All have potentially suitable vehicles or are pairing up with another company which has one,” said Greer. “They wouldn’t have made it through the ITQ if they didn’t have a vehicle currently in use.”

The prospective timeline, which he admitted is tight, is to move the project from definition to the implementation phase in 2023. Initial vehicle delivery is expected in the spring of 2025 and final delivery a couple of years later.

A final request for proposals is expected this summer, possibly by June. “We’ll be starting paper evaluation in the fall. With that, [manufacturers] have to deliver a vehicle so that we can begin physical testing on it, which would be early in 2022. It’s quite a tight timeline for them to have one ready because they’ll have to modify their plants and then conduct their own testing to confirm compliance before the vehicle is delivered,” Greer observed. 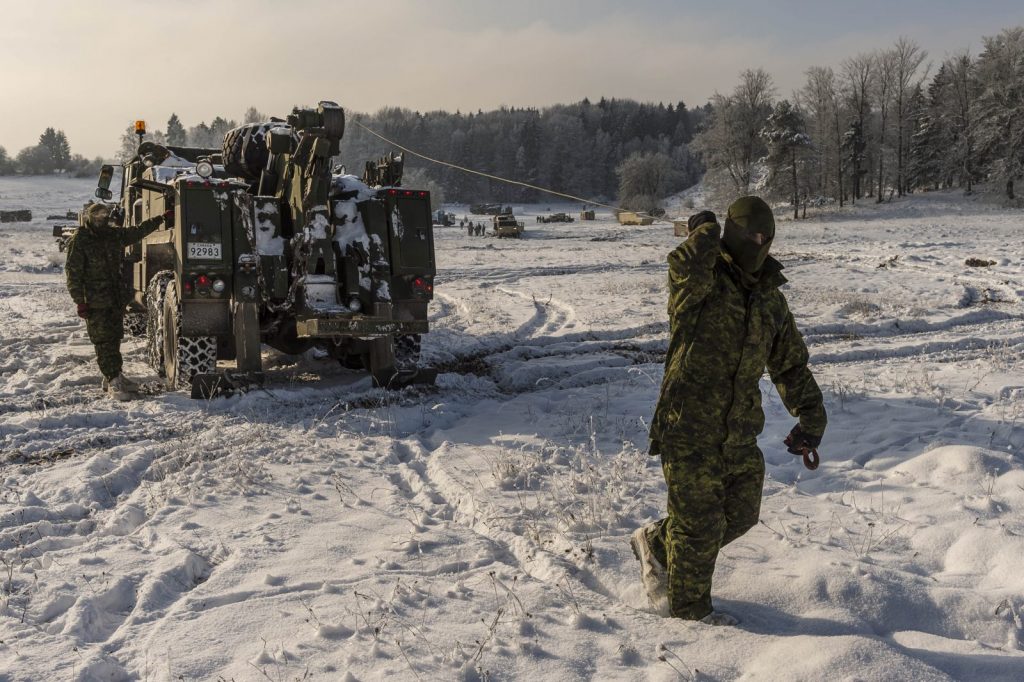 That would set the stage for 18 months of bid evaluation and vehicle trials, leading to a contract award “around April-May 2023.”

Initial industry feedback to the project suggested the Army was “shooting for the stars because [the] technology’s not there” yet to meet all the requirements in one vehicle platform, Greer acknowledged. But the engagement process has helped refine requirements, validating a split fleet, and “let us know realistically what we should be asking for in certain specifications to complete the mission. There will be some minor modifications to meet Canadian transportation and safety regulations, regardless of which company wins the contract.”

That includes lights and some safety specifications unique to Canada. Then there are the provincial road regulations. Each qualified supplier has had to share – and may possibly have to modify – their design with provincial transportation departments, which have “unique features such as weight, dimensions, distance between axles, etcetera,” Greer noted. “Some requirements are being massaged due, in turn, to provincial feedback. There’s not a set standard across Canada.”

Overall vehicle dimensions can affect whether escorts or special permits are required due to road and bridge clearances. There also could be issues with tire loadings on road surfaces. Spring thaw can mean softer surfaces and require lighter loads, a common practice in the logging industry and elsewhere in the civilian world. “We’re in the same predicament. Once the ERC leaves on a recovery call, depending on what time of year it is, it could be over the road limits,” he said. “Also, tire sizes can differ between manufacturers, which is another reason for them to be talking directly with the provinces.”

The project is well on track to procure platforms that can “extricate disabled or damaged vehicles by pulling, lifting or righting them and then moving them to a safe place where repairs can be completed and they can be returned to use, whether on operations at home or abroad,” he added.