When Exercise Soaring Goose launched from the Blissville airstrip in the Gagetown range on July 20, it marked the first training event for 129 Battery as a dedicated small unmanned aircraft systems (SUAS) unit.

Since the CU172 Blackjack was acquired in 2017, 4th Artillery Regiment (General Support) has been steadily improving their training standards and tactics, techniques and procedures (TTP) for the intelligence, surveillance, target acquisition and reconnaissance (ISTAR) platform, in preparation for eventual deployments. But the Blackjack was always among several capabilities in a general support Battery that included an airspace coordination centre and a medium range radar troop.

Following the Regiment’s restructuring this spring to align itself as a capability-based organization, 129 Battery is now the sole operator of persistent ISR drone capabilities for the Army. Soaring Goose was the first opportunity to train as a concentrated SUAS sub-unit.

The three-week exercise confirmed newly developed site survey TTPs, a reconnaissance activity requiring operators to inspect terrain for safe launch and recovery positioning of the Blackjack to ensure rapid and continuous support to friendly forces. It also provided operators and maintainers an opportunity to work with contractors from Insitu, the aircraft manufacturer, as they refine their procedures.

“It was a great bonding experience for the entire team,” said Major Timothy Degaust, commanding officer of 129 Battery. “We flew close to 20 missions … and it was the first time that, thanks to support from the Royal Regiment of Canadian Artillery School (RCAS), we were able to shoot live calls-for-fire with the system. They had the Howitzers sighted in and then we functioned as the observers for a series of fire missions.”

Though 129 Battery is the operator of the SUAS, the RCAS is the functional centre of excellence for many ISTAR capabilities, including remotely piloted aircraft.

Soaring Goose also served as the culmination exercise for six students on the SUAS Detachment Commander course. In a scenario drawn from the Decisive Action Training Environment, the CU172 Blackjack was employed as a high-level surveillance asset, with specific tasks to support allied and Atropian forces battling an aggressor nation, Ariana. The prospective commanders were trained and assessed on their ability to conduct the site surveys and other flight operations.

While the exercise and other training events are helping to build unit capacity and readiness, the SUAS must first be declared IOC (initial operational capability) before it can be deployed on expeditionary operations. The 4th Artillery Regiment had expected to reach that milestone more than a year ago, but the complexity of the system and travel restrictions created by the global pandemic have delayed that achievement.

“We have trained enough operators and detachment commanders to support a limited capability at this point, but it takes a long time to build the expertise to be proficient with a system as complex as this,” said Degaust, an artillery officer and former gunnery instructor with the RCAS who was posted to 4th Artillery Regiment in 2019 as the operations officer. “We are working toward IOC, but we are at the point where we have a relatively healthy number of qualified and experienced individuals to operate the system.”

However, like any Canadian Armed Forces organization operating an aircraft, 129 Battery’s maintenance team requires airworthiness accreditation before it can claim IOC. An audit team from the Directorate of Technical Airworthiness Engineering Support, an Air Force organization in Ottawa, will “conduct an audit during an exercise to inspect the manner in which we are doing our business in the field,” he explained. “That audit process was disrupted by Covid-19, so we’re waiting for the right training opportunity to complete that.”

That could happen in the coming months or as late as Exercise Maple Resolve in May 2022 when the regiment’s full ISTAR capabilities are validated for operations. 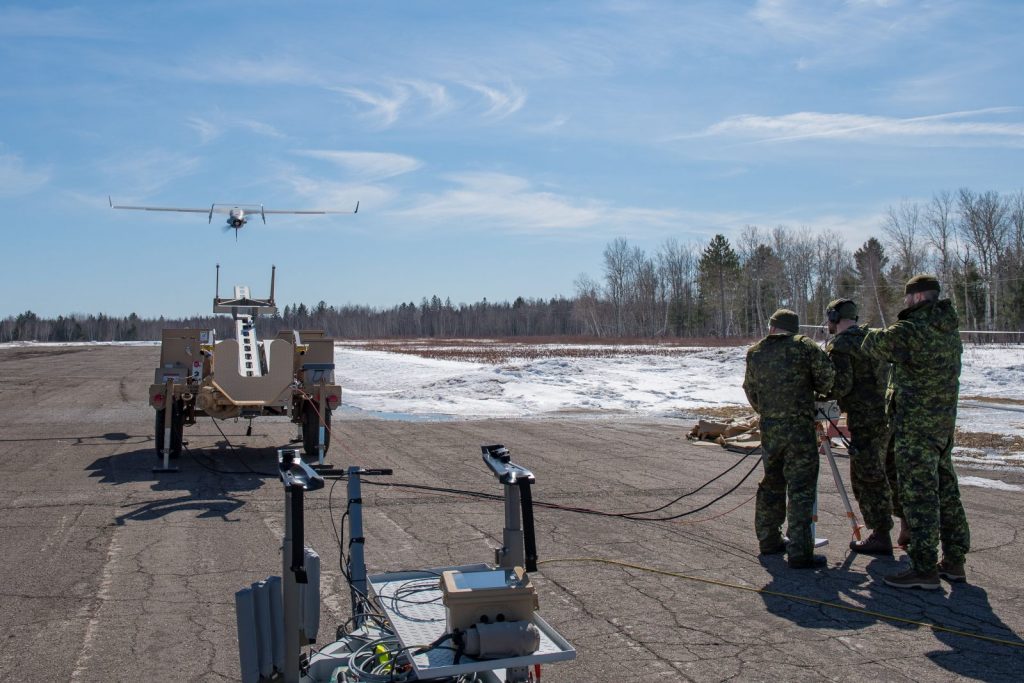 Flying unmanned aerial systems is old hat for the 4th Artillery Regiment, but the CU172 represents a new operating structure. Army trials with UAS have been ongoing since the 1960s, but the regiment truly cut its teeth with a small UAS in Afghanistan, logging over 30,000 flight hours with the Insitu CU165 ScanEagle, a smaller sibling to the Blackjack. The aircraft, however, was leased rather than bought, and it was supported during the six years of operations by a contracted team from ING Robotic Aviation, which handled launch, recovery and system repair. The CU172 is the first SUAS fully owned, operated and maintained by the Army.

“We are familiar with the type of capability, but this is the next generation of systems,” Degaust emphasized.

Insitu still provides one maintenance course, and a senior aircraft maintenance superintendent from the Air Force, Master Warrant Officer Vincent Lagace, is embedded with the regiment to guide the adoption of air maintenance standards. “It is a deliberate process where we try to glean as much expertise as possible from the people who know the system as we work toward becoming completely self-sufficient,” Degaust said.

The Blackjack can operate up to a ceiling of 6,000 metres at a normal cruise speed of 60 knots – although Insitu claims to have achieved 90 – and a flight time that exceeds 18 hours. The unclassified communications range is about 100 kilometres to a ground station, and the standard sensor package includes an electro-optical imager, a mid-wave infrared imager, a laser rangefinder, an infrared marker, and a communications relay. Degaust was cautious with sensor system specifics, but admitted the “camera is pretty good.”

A typical SUAS troop includes the commander and personnel to operate up to five aircraft, two launcher and recovery systems, and one or more ground control stations. And the RCAs is currently qualifying each year around a half dozen detachment commanders and 16 detachment members. In anticipation of the demand for the ISR platform once the CU172 achieves full operating capability, the Battery is in the process of accepting a second Blackjack system of aircraft, catapult launchers and capture systems, ground-control stations, simulators and other support equipment, to be completely delivered by the summer of 2022.

Even though the CU172 has only been flying on domestic exercises, “demand is starting to intensify,” Degaust admitted. Other units are now requesting SUAS support as part of their training plan, which in turn is helping 129 Battery learn how to best integrate the capability. In mid-October, the Battery deployed with the 2nd Battalion, Royal Canadian Regiment, for Exercise Intrepid Bear in the Gagetown training area. “It’s a great training opportunity for us to learn how to support a smaller tactical entity and, more importantly, a local unit with whom we have close ties. In the past we have almost exclusively provided support directly to brigades across Canada, so now we’re taking a step down into a lower tactical echelon to support the battalion commander directly.”

With a stated purpose of “answering questions” that can be posed by multiple commanders at the same time, the SUAS Battery must be versatile, able to integrate with a platoon, a company or even a corps, depending on the scale of the operation at hand.

“It’s a capability that can be nested within a division, but also bolted on to a battalion headquarters as their dedicated drone support for ISR,” said Degaust. And members are recognizing the importance of the specialized capability, he added. “That gives people a true purpose. You can see that identity and pride beginning to build as we develop confidence in our abilities.”

Covid-19 may have deflated some of the initial momentum under the wings of the CU172 Blackjack, but it is lifting off once again, he confirmed.