Back to Bold Quest 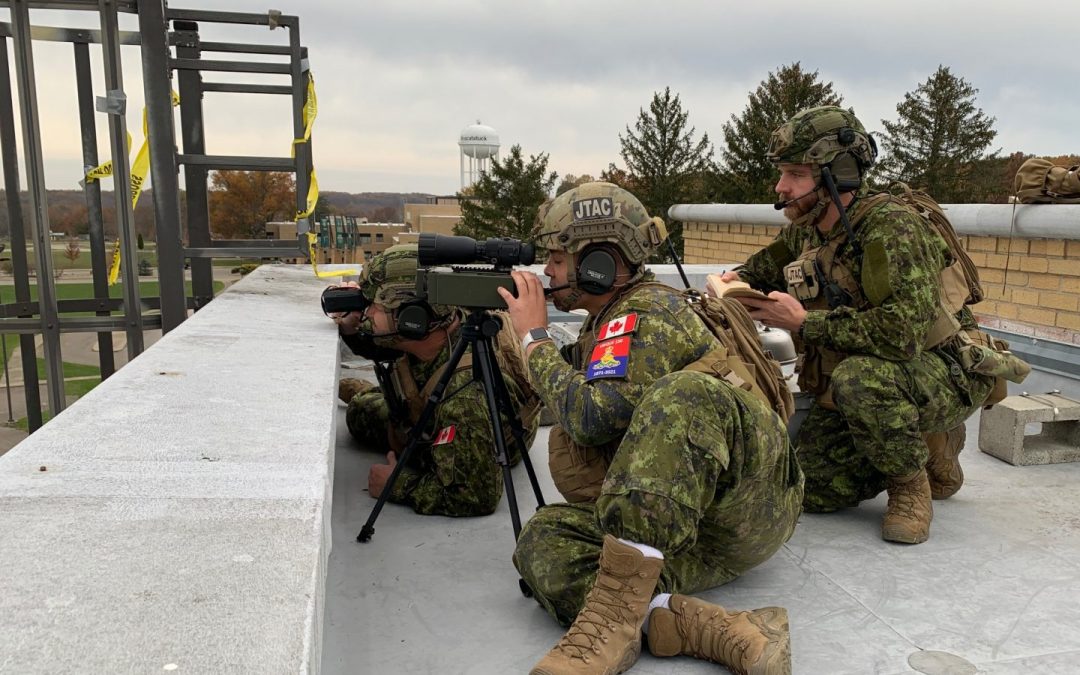 On the calendar of joint fires and sensor-to-shooter capability demonstrations, Bold Quest is a key event. But when around 600 participants gathered last October, most of the 200 international attendees were virtual observers, watching online due to pandemic travel restrictions. That included a Canadian contingent of joint terminal attack controllers (JTACS) and members of the Joint Fires Modernization (JFM) project team.

This November, they will once again be back on the ramp at the Camp Atterbury Joint Maneuver Training Center in Indiana for the three-week event hosted by the U.S. Joint Staff. Bold Quest provides a realistic operational environment to assess the capability and interoperability of new systems, and for the JFM team it’s been a venue to trial and showcase its recently acquired digitally-aided close air support (DACAS) system.

“We’re pretty excited,” admitted Master Warrant Officer Jamie Murphy, a master gunner with the JFM project in the Directorate of Land Requirements. Though he will be building on previous demonstrations of the current DACAS system, “confirming its capability over different waveforms, there will be multinational aircraft there that we haven’t had a chance to control before. So, this will help ensure our interoperability with those nations and platforms, from fast movers to fixed-wing and even a bomber.”

Bold Quest is also an opportunity to “do some fact finding” about the close air support and joint fires capabilities of other nations as he negotiates an upgrade of the DACAS system and expands the tools available to Canadian Army JTACS and forward observer officers (FOOs). “There are a few things I will have my eye on, like digitally-aided fire support.”

The Army acquired the Android-based version of DACAS in 2017 under a $4 million contract with Collins Aerospace. And in previous iterations of Bold Quest the system was one of the highlights of the event, instantly connecting and exchanging targeting data with the various aircraft on the ramp while Joint Staff evaluators verified the message traffic.

The Collins Networked Joint Fires Cross Platform Dismounted Solution is an off-the-shelf Google Pixel tablet connected to a tactical hub supporting a Tactical Net Rover, a laser range finder, GPS, Harris 152A or 117G radio, and a conformal battery. The touch-driven targeting system uses an open-source military Android Tactical Assault Kit (ATAK), a software application that includes a geospatial mapping engine and other plug-ins to reduce and simplify the steps for JTACs to digitally coordinate air support from both legacy and next-generation aircraft.

Specifically, the DACAS system allows a JTAC to coordinate air strikes in less than two minutes, rather than the typical 15 to 20 minutes it often takes to “talk on an aircraft to a target” by voice with a close air support brief.

The initial procurement delivered a baseline capability of hardware and software “to be able to send a variable message format over a combat net radio,” said Murphy. A Block II project would enhance the overall system for FOOs and JTACs by allowing them to exchange more information. “It is not going to replace anything, just add more tools in the toolbox. We are looking at a Link 16 handheld radio that allows JTACs to utilize that tactical datalink to exchange more situational awareness and targeting information with the aircraft. As part of that next software build, we are looking at having not only close air support messages, but also digitally-aided fire support messages.

The handheld Link 16 radio would be a similar form factor to the current AN/PRC-152A, but the data would be digitally transferrable to a JTAC’s tablet. Whether the project can leverage existing contracts or will require a minor capital request for proposals is yet to be determined.

To improve target acquisition, Murphy also intends to deliver a new handheld digital thermal imager. JTACs currently employ the Safran Vectronix STERNA with a Vector 21 binocular rangefinder for locating targets, “but don’t have a thermal capability that can go onto that,” he explained. “This project is looking at a limited quantity of thermal imagers that would allow us to capture, save and send images. I’m also integrating that into our DACAS system so that targeting data can be inputted.”

Upgrading the software and the gyroscopes in some of the STRENA targeting locating modules, “when combined with that thermal, will give us Category 1 coordinates capability for precision munitions,” such as the M982 Excalibur 155 mm guided artillery shell. 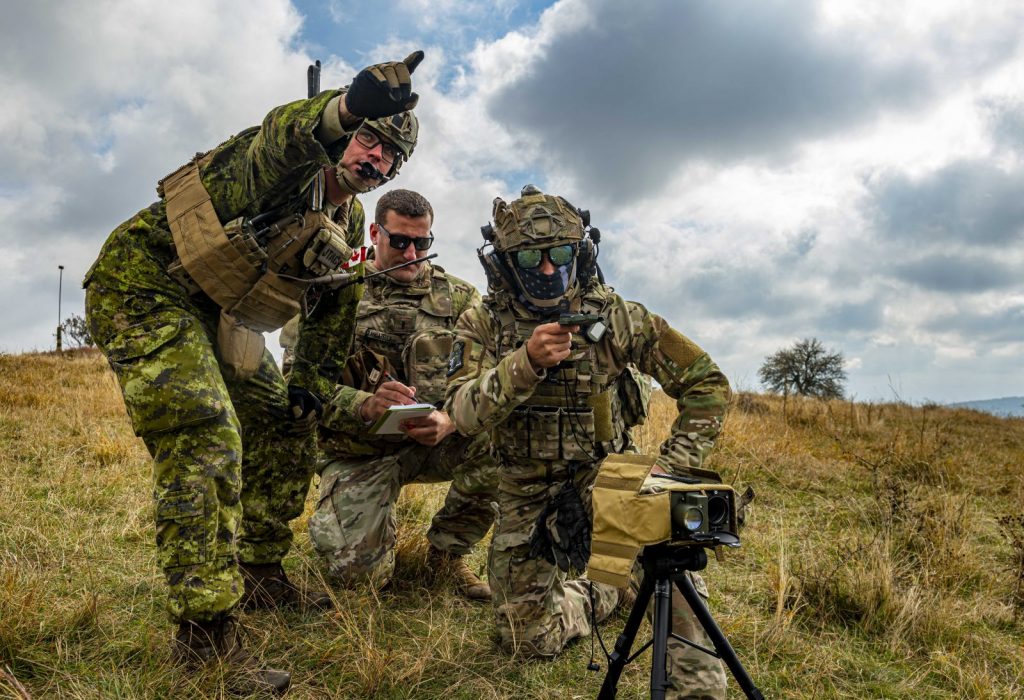 Canadian and American Joint Terminal Attack Controllers work together during training at the Cincu Range in Romania in October 2021. Photo: Aviator Avery Philpott

Each project, however, is a trestle in a bridge to an eventual solution for modernizing joint fires, one of the central components of the Army’s digital transformation. The JFM team has made good use of minor capital funding to address gaps in capability, but digitizing communications between a dismounted JTAC and a line-of-sight aircraft is only the first step in a larger effort to connect sensors to shooters, whether land artillery and other guns or air and naval fire support platforms.

The JFM project will include vastly improved command and control capabilities through the procurement of targeting and battle management software, tactical equipment, and high-fidelity simulation training systems for operators, commanders and a myriad of planners, coordinators and other targeting staff.

“It doesn’t give us that situational awareness that we need. That data usually comes in through our Airspace Coordination Centres. They can receive and track that data, but we don’t necessarily know where all those aircraft are. Link 16 can give us a huge ability to not only get the full air picture into our tablet to see what else is in the air, but also allow us to input our own position so an aircraft can see that as well. As we’re able to share that data back and forth, we can delineate between friendly and foe and hopefully reduce fratricide.”

If the Army adopts ATAK for its Integrated Soldier System Suite (ISSS), part of a planned final software upgrade for the new communications equipment, JTACs and FOOs would also be able to share situational data with dismounted soldiers. “That is the goal,” said Murphy, though he noted that the ISSS will use Cursor on Target, a different internet protocol for sharing positional information than DACAS.

The pandemic has prevented the JFM team from “being able to get out, meet face-to-face, and have those conversations that are hard to do virtually” with allies and industry, he said. That has delayed some decisions, but also allowed the team to dispense with a lot of paperwork. The schedules for a DACAS upgrade and a thermal imager are both on track for delivery by fall 2022.

“There is a lot to learn from moving forward with DACAS and these other minor capital projects,” Murphy concluded. “If JFM is looking to deliver in the 2025-2026 timeframe, that is a lot of years to sit and wait. My big goal with this project is to get the community familiar and smart using Link 16. Hopefully that will facilitate a seamless transition to whatever JFM delivers.”