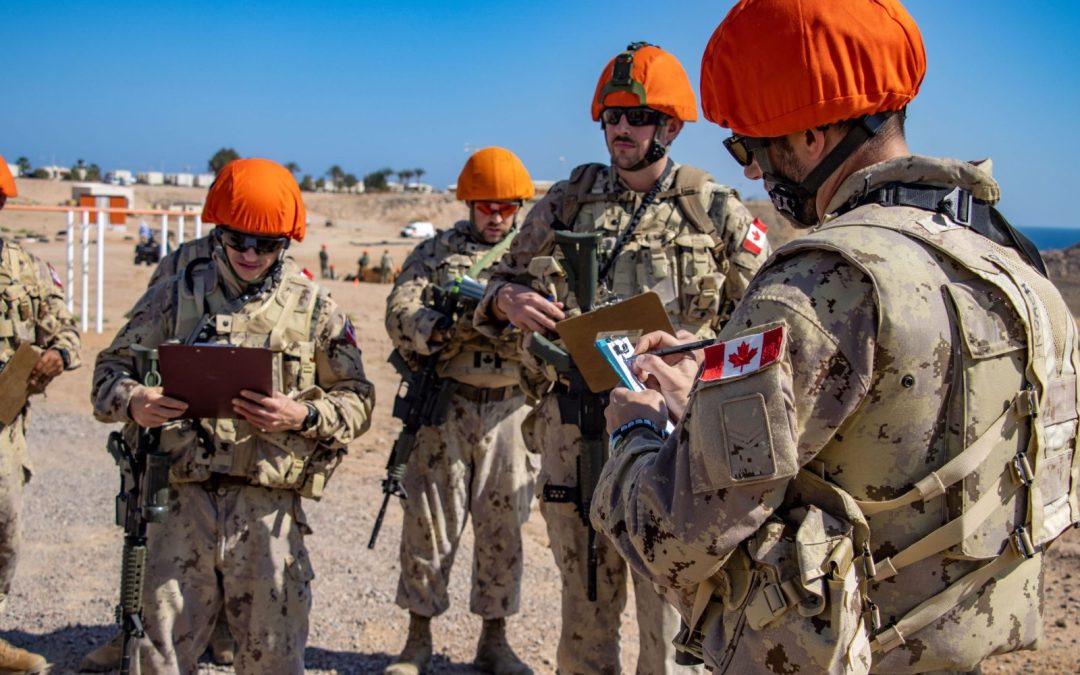 Whether it’s combat operations in Afghanistan, training armed forces in Ukraine, providing a deterrence presence in Latvia, peacekeeping in the Middle East, Africa and the Balkans, or domestic operations in support of destructive weather events or a pandemic, Canadians soldiers are adaptive.

“I believe that’s one of the competencies that Canadians bring to a multinational force. We are very adaptive, and that comes from our training, our openness, and our diversity,” says Colonel Pierre Leroux, an infantry officer with deployments in Bosnia, Congo, Afghanistan, and as the commander of Joint Task Force Ukraine from September 2018 to April 2019.

“If you look at all the missions to which we are called, you can see that they are quite different. We strive to gain an understanding of what it takes for capacity building, what it takes for counterinsurgency, what it takes for peacekeeping, and we can just put on different hats. I really think that’s one of the Canadian strengths: to adapt to the circumstances and be effective contributors.”

The Canadian military is no stranger to the Middle East. The first Blue Berets entered the region in 1948 with the United Nations Truce Supervisory Operation. The UN Security Council (UNSC) generated mandates to supervise, patrol, observe and report about the various ceasefire agreements between Israel and its neighbours. Thousands of Canadian Armed Forces personnel were awarded the medals and ribbons of the United Nations Emergency Force (UNEF I) (1956 to 1967), UNEF II (1973 to 1979), and the United Nations Disengagement Observer Force (1974 to the present).

United States President Jimmy Carter then hosted both the Egyptian and Israeli leaders to formal peace talks in September 1978 at Camp David, near Washington, D.C. The result was the Camp David Accords and the formal ratification of a Treaty of Peace in March 1979.

The UNSC’s abrupt cancellation of the UNEF II mandate in July 1979 left Carter concerned that a conventional UN peacekeeping force to supervise the implementation of the treaty was unlikely. The U.S. then negotiated with the treaty parties to establish an alternative force. The U.S. Sinai Field Mission (SFM), established in 1976, worked with the UN to observe the stipulations of the peace accord and monitor the Israeli withdrawal. The Multinational Force and Observers (MFO) was then established by a protocol to the treaty in August 1981.

As Israel completed its withdrawal from the Sinai, the MFO mission moved in in April 1982 and set up its main camps at El Gorah and Sharm-el-Sheikh to observe, verify and report compliance with and any violations of the peace treaty, and to ensure freedom of navigation through the Strait of Tiran at the southern entrance to the Gulf of Aqaba. 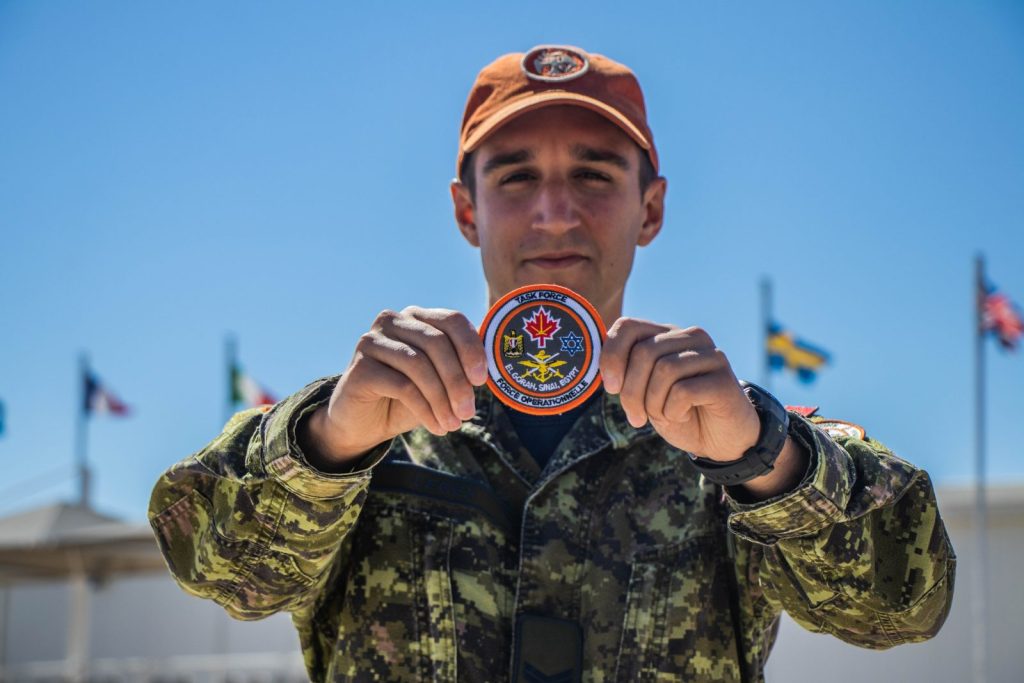 The calumet is a historic component of the ceremonies of First Nations groups, better known as the venerated “peace pipe.”

“It’s quite a legacy that we’ve developed. We’ve been here almost from the start,” Leroux told Canadian Army Today. “Since then, there was always a Canadian contribution to the mission. Through the years, our contribution has continuously met evolving requirements, from helicopters in the early years to military police more recently.”

The initial Canadian contingent was reduced when the U.S. military took over rotary wing operations in March 1990. Twenty-nine Canadians remained to serve with MFO Headquarters in El Gorah, Egypt. Fourteen serve on one-year tours of duty, the other 14 on six-month tours.

The MFO uses helicopters and small fixed-wing aircraft to travel throughout the mission area. CAF members, part of MFO Air Operations, coordinate air movements with local authorities and keep track of their positions. They also provide them with information on traffic, weather, and flight plans. It provides critical support to the mission.

With the drawdown of the military police contributions, Canada is focusing on delivering key capabilities to support the observation of the Treaty of Peace and Agreed Activities and facilitate the continuing peace between Israel and Egypt.

“Canada actually provides key members of the MFO headquarters, all of whom are double-hatted with Canadian and MFO duties,” Leroux underscored. “The Canadian contingent is led by a colonel or navy captain who also serves as the mission’s chief liaison officer. Canada also provides staff officers, senior leaders and experts in logistics, engineering and training.

“Unlike some of the other nations that contribute specific capabilities to the MFO, we’re spread out across the force. Most are in the Force headquarters, where we have people in almost all of the branches. For instance, we have eleven people in the J-3 branch, including seven in Air Operations, within the Force Operations Center. Three Canadians are in J-1, three in J-2 and two in J-4.” 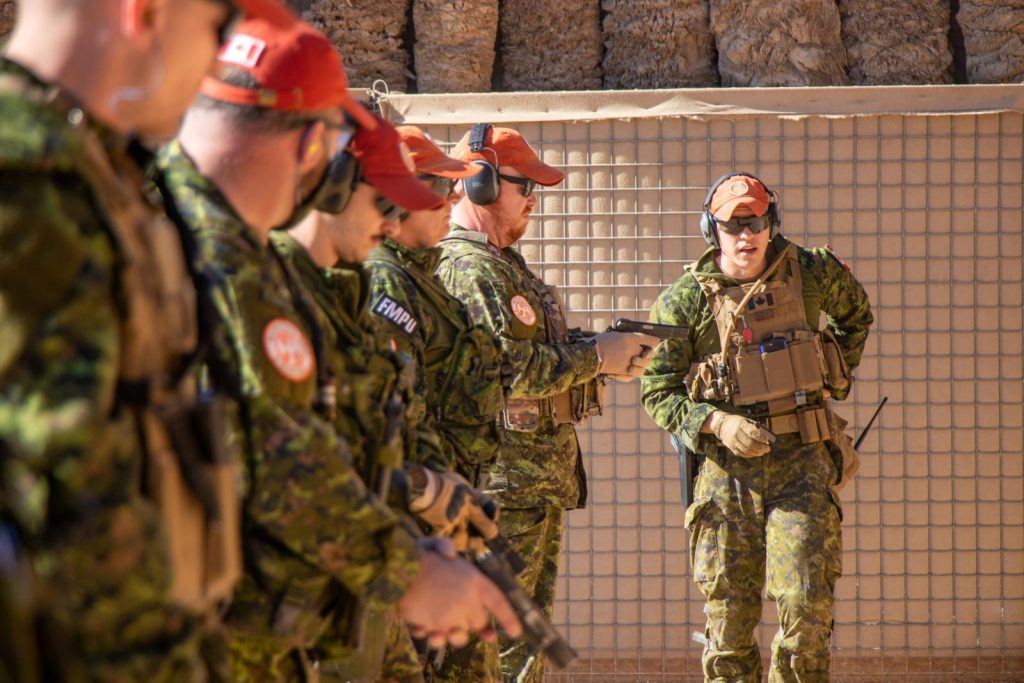 The contingent includes representation from across the CAF, with Army expertise drawn from the Tactics and Infantry Schools at the Combat Training Centre in Gagetown, to 5e Régiment d’artillerie légère du Canada, and Reservists from units such as 30 Field Regiment in Ottawa.

“While we have most of our folks in the headquarters situated at the southern tip of the Sinai, there are five to 10 of our 55 members working out of North Camp in the northern part of the Sinai, and we also have individuals and pairs at different locations across the Sinai for specific tasks,” said Leroux.

“On top of that, we’re also leading the J-7 branch, and I am the head of the liaison branch where we have another five Canadians. We also have the Force sergeant major position, currently held by Chief Warrant Officer Dominic LaPointe, a combat engineer senior non-commissioned officer. I am proud to say that a Canadian chief warrant officer has historically been the force sergeant major. That specialized Canadian capacity underscores the high quality of the senior non-commissioned officer corps of the Canadian Armed Forces.”

One key to the Canadian contribution is technical competence and expertise, he said. “Each of us is here for our technical competence, to some extent. But it is our professionalism as a whole that brings us together and makes us what we are – a contingent that can be counted on by the MFO.

“In every one of those branches we have go-to people who make it happen every day. And that’s truly a nod to our training system, and a nod to the diversity of our operational experiences, and how we prepare so we can be instantly effective when we hit the ground.”

Major Tim Dunne, CD, is a retired public affairs officer. His service includes peacekeeping and peace support operations in the Middle East and the Balkans. He is the recipient of numerous awards, including a citation from the Privy Council of Canada.