Adapting to COVID: The Army Surgeon’s guide to navigating a pandemic 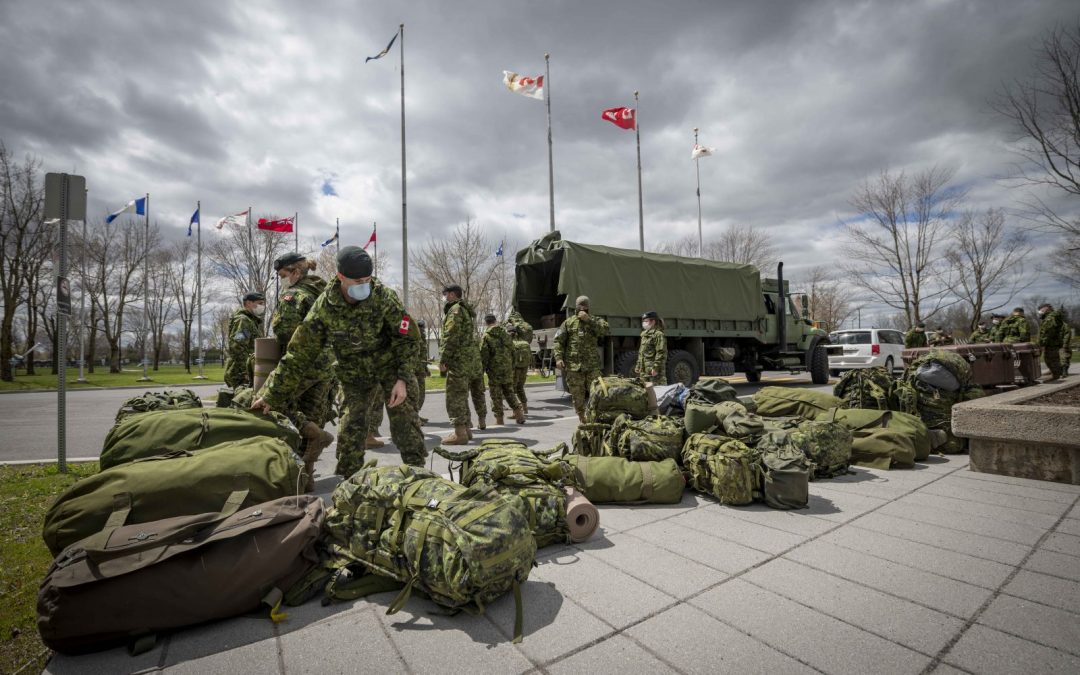 If you have ever transferred into a job in the midst of an emergency, you can probably empathize with Colonel David Coker. On Apr. 6, he was promoted to his current rank and named Canadian Army Surgeon, a role that involves providing health and medical advice to the Army Commander and the Army’s doctrine and training system, as well as serving as a liaison with Canadian Forces Health Services and with the Division surgeons across the country.

Coker has deployed as a trauma physician to Afghanistan and, in 2017, as the commanding officer of the Coalition Role 2 hospital in northern Iraq. Over 23 years of service, he’s also held positions in 2 Field Ambulance, as 2 Canadian Mechanized Brigade Group surgeon and as 5th Canadian Division surgeon. Still, stepping into a largely deserted Army headquarters in the early days of a pandemic, when much about the spread of the coronavirus was unknown, was “an interesting time,” he mused. “I was promoted over the internet. It was one of the first Zoom promotions for [CFHS].”

At the time, the Canadian Armed Forces (CAF) was working from a contingency plan, Operation Laser, informed by past experience with an outbreak of severe acute respiratory syndrome (SARS) in 2002 and a global influenza virus (N1H1) pandemic in 2009. “Those plans are big hands, small map in that they provide guiding principles for how we might react to a domestic pandemic, and they try to predict what the ask will be if there is one,” Coker noted.

Canadian Joint Operations Command, which led Op Laser, had conducted “war gaming” in advance of the pandemic to consider possible scenarios, including a request to augment overrun hospitals by supporting pop-up care centres for overflow patients with low acuity. Of all the permutations, providing relief in long-term care facilities was not in the mix.

“If you had told me at the beginning of March that our major task would have been intervention in long-term care facilities, I’m not sure I would have believed you,” Army Commander Lieutenant-General Wayne Eyre admitted.

While measures were quickly taken to protect and preserve the Force for a possible response, in those early days national and international health authorities were struggling to understand the scope of what they were facing. How the virus was transmitted, who was most at risk, and what treatments were available were among the “many unknowns,” said Coker, whose first task was to prepare general information on COVID-19 for military and civilian personnel, a document that has since evolved into a mandatory general COVID awareness course for all Department of National Defence personnel.

More than 24,000 Regular and Reserve Force members and Canadian Rangers were mobilized. The Army established regional task forces, some at physical locations such as Canadian Forces Base Borden, Ont., others in virtual settings, but all prepared to act. The Army even brought 8,000 Reservists onto full-time service, the “largest activation of our part-time Reserves onto full-time service since the beginning of the Second World War,” said Eyre. 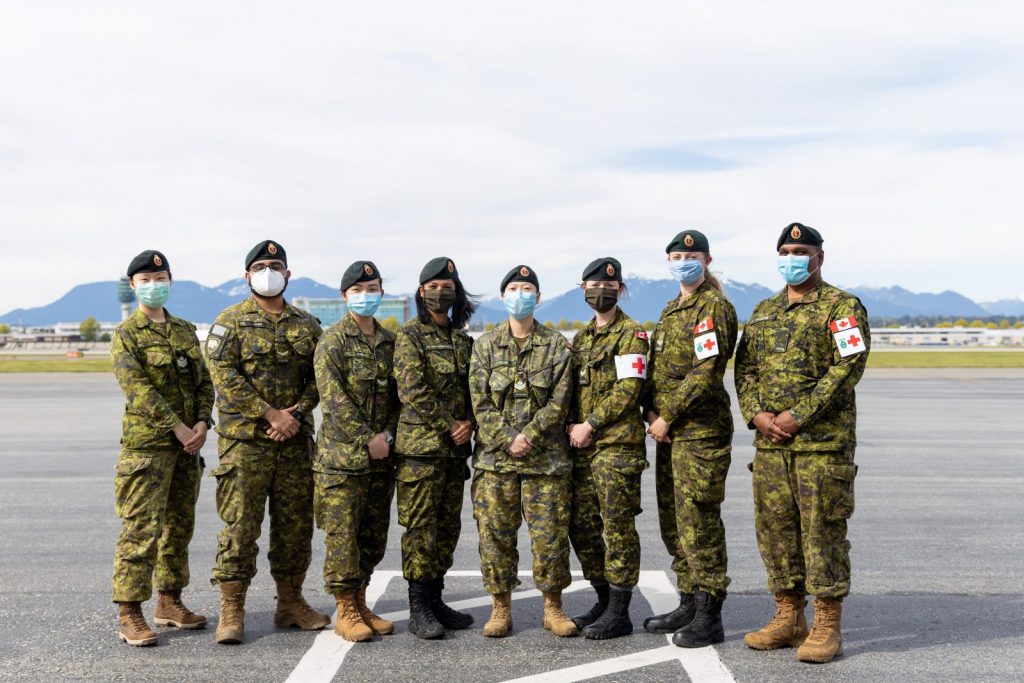 When Coker arrived at Army headquarters, many of the steps to protect the force and prevent clusters of outbreaks were already in place. Much of the training system and professional development was on pause, garrisons had slowed to essential activity, and headquarters staff across the country were working from home where possible and relying on new online tools to command and communicate. The conversation was now turning to when and under what conditions the Army could resume force generation.

Much like federal, provincial and municipal health authorities advising their governments on how and when to restart their economies, Coker’s initial briefings to Eyre and the Command Team focused on public health risk reduction principles, developing testing technologies and their limitations, and how such technologies might be prioritized.

Internal testing capacity was almost non-existent at the time, but as it became available, could it be combined with quarantine before a resumption of training? “And what was the risk if we can’t do the ideal solution? How do we plan for a positive case in a training environment? How do we ensure everyone is doing daily health checks of symptoms? On courses and exercises, how do you feed everyone? How should you set up ablutions? Sleeping quarters? There was a menu of questions we had to answer to help reduce risk.”

The Army underscored any return to training would be asymmetrical and asynchronous, beginning only as conditions in each province and region permitted. The paramount objective was to prevent spread within the Force itself and out to the wider community, especially in regions where health resources were limited or already stretched.

“If you are on a base where there are lots of single rooms, single bathrooms, that gives you flexibility to quarantine people,” said Coker. “That is the approach (5th Canadian Division Support Base) Gagetown was able to use. And that was the approach I was recommending. They restarted gradually, with one or two courses, and then they ramped up slowly, making sure to share any lessons learned with the greater Army and CAF.”

Where bases lacked the infrastructure to quarantine in place, the options included a period of quarantine at home, keeping courses and training units to smaller “cohorts” that could be monitored and kept on base for the duration of the training.

As units began briefing the Canadian Army Doctrine and Training Centre about their local circumstances, division and brigade surgeons were able to weigh in with options. “I did say, ‘there will be cases, the important thing is to have well established procedures and protocols to deal with them when they happen’,” said Coker.

Learning quickly from any issues that arose from the restart was a priority. Above all, though, were leadership and continuous communication. “That is what the Army is good at, providing junior leaders information to reinforce what needs to be done,” he said. “What I tried to do was provide the principles, and then the local circumstances have to come into play to develop the plan, and then that plan needs to be assessed for its risks – assuming said risk is a command decision.” 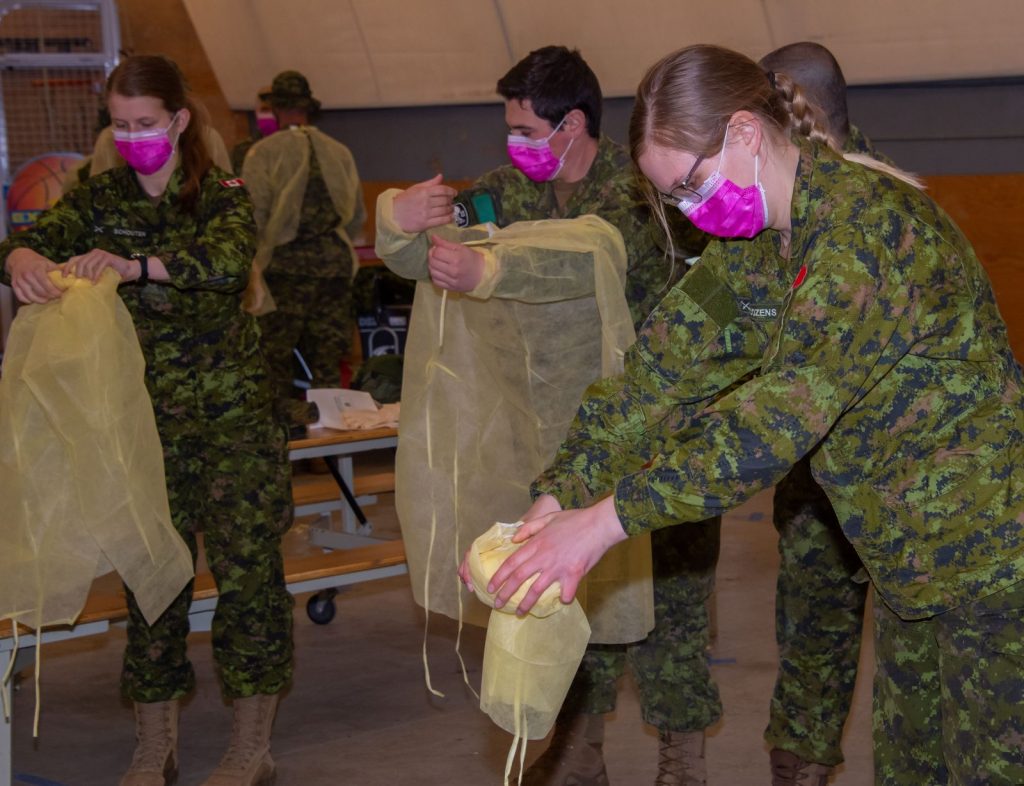 When force generation resumed, Eyre put a priority on individual training. By late summer, entry-level and basic qualification courses, leadership programs and primary combat functions were well underway. Now the discussion is centred on how to safely conduct the collective live exercises essential to bringing together headquarters, combat teams and critical enablers.

As with individual courses, the same guiding principles for protecting the force apply. But Coker is also assessing additional questions. Will an exercise involve visiting military? And what are the parameters for integrating them? Can the limited testing capacity be used to target test groups that aren’t able to quarantine for a duration? Is there capacity at an exercise to isolate those who come into contact with someone with COVID until testing can confirm their status?

“One of the key principles I’m pushing is early coordination with division and local medical advisors – the division, brigade and base surgeons and the medical planners – so we can appropriately estimate what level of medical support is available to an exercise concept and then develop a plan in a realistic way. We can’t have zero risk, so the philosophy is, we are going to take as many precautions as we can so we can keep going with our mission of force generation.”

He’s also warning commanders not to become fixated on the coronavirus at the expense of other health issues such as cold and heat that can cause injury in training environments.

The lessons from the Army’s deployment into long-term care facilities are still being gathered and shared and will eventually inform an updated CONPLAN for pandemic response.

“Troops embraced the task and I am very proud of the job they did,” added Eyre. “Working with Health Services, they saved lives.”

But there is little question the pandemic has had a significant impact on force generation, and the lessons from that are being distilled and implemented immediately. “If there is a takeaway, it is that we can’t afford to shut down our personnel production pipeline like we did,” said Eyre. “Now we are much more comfortable operating in an active COVID environment. And going forward, it would have to be pretty significant before we would shut down training again.”