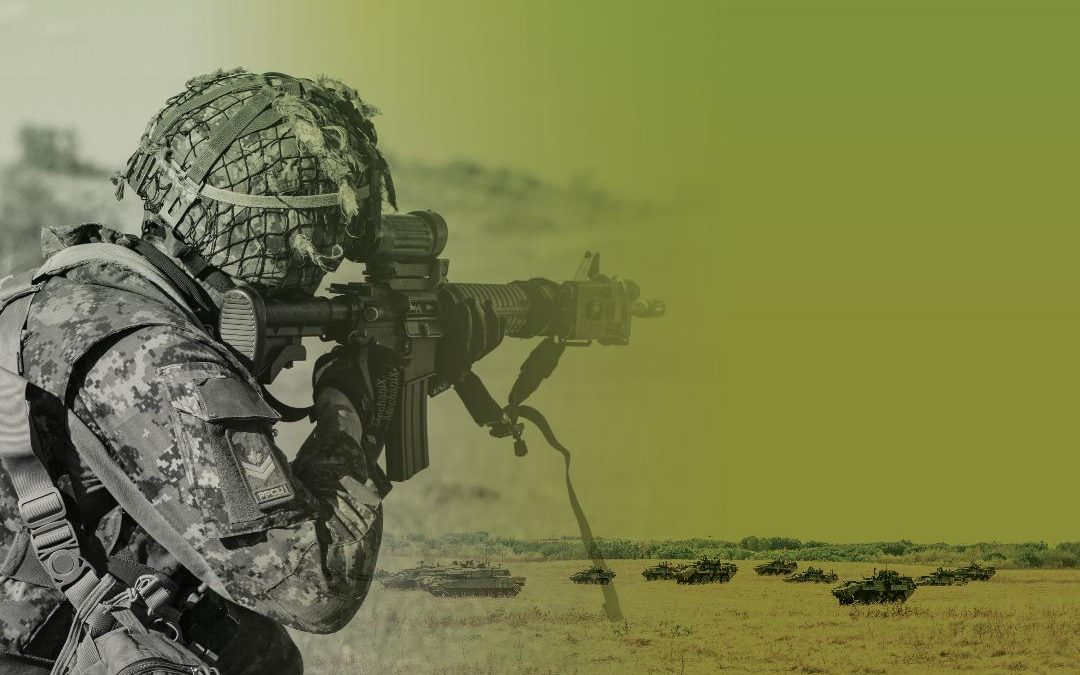 Thanks to the Canadian Army, life should be a little easier for the prairie skink. Although this small, striped lizard is mostly found in the United States, in a band that runs from the Gulf Coast of Texas north to the Dakotas, in Canada it is confined to one fairly small area in southern Manitoba. In what has become an all-too-common story, it has suffered due to widespread habitat loss and is now officially listed as endangered.

Canadian Forces Base (CFB) Shilo falls within the skink’s Canadian range. Nothing is set yet, but for the past few years the Department of National Defence (DND) has been working with other branches of government to ensure that the base meets the criteria to be designated an Other Effective Conservation Measure. This is a designation for a natural area found outside of a provincial or national park deemed worthy of preservation and where measures are in place to ensure just that. DND has also worked with the Manitoba government to have the province add Shilo to the Canadian protected and conserved areas database.

The Army may wear it, but green, at least in the environmental sense, is not a colour you might associate with the land force. The very nature of training and missions tend to work against a green footprint. However, the Army has measures underway to mitigate its impact on wildlife at risk, help battle climate change, and minimize environmental degradation and habitat loss. These range from modest efforts to protect groundwater to ambitious plans to protect thousands of square kilometres.

Can you create a “green” explosive? That’s actually something the Army has talked about – a no less lethal but paradoxically somewhat less environmentally harmful version of its venerable C-4 plastic explosive. The idea is currently being examined by DND’s Materiel Group.

The Army’s munitions can be a source of environmental pollution. While not a primary concern in a genuine battle environment, it is an important consideration when such pollution occurs on firing ranges and in training areas (RTA) in Canada.

Justin Thomas, manager of Range and Training Areas Environmental Sustainability for the Army, says there are three primary concerns: “metals, energetic materials and propellants.” The final two are similar, he said, but differ in their chemical composition.

“We have a research program in collaboration with Defence Research and Development Canada to better understand the environmental impact of our munitions,” he explained. The research looks at how much pollution will be released by different munitions and how such pollution will move and break down once released into the environment. The Army’s primary concern is the protection of water resources, notably those drawn on for potable water, water that flows out of areas controlled by the military and into civilian areas, and water “frequented by fish” as per the federal Fisheries Act.

“Canada,” says Thomas, “was the first NATO nation to do a deep dive into investigating the impacts of live-fire training on water quality in its land ranges and training areas.”

To this end, the Army has issued Order 23-15, which standardizes how and how often Army establishments monitor RTA water quality – generally once, but in some cases, twice a year, depending on the site.

“We’ve been looking at ways to improve the management of small arms ranges,” says Thomas. Ranges are still backed by large dirt berms, where fired rounds bury themselves. These are a potential source of pollution. One of the things they are looking at is “a bullet catcher, a sort of membrane over the berm” that would keep any rainfall away from this possible source of contamination and limit its ability to migrate.

“In the upcoming fiscal year, we’re also going to be looking at some modeling,” he says, which could determine “when they should be cleaning up the berms before any metals can migrate into the natural environment.”

There is more work to do but, so far, they aren’t seeing “any major red flags.” However, Thomas notes that another big problem, one which they haven’t tackled yet, is the ongoing accumulation of unexploded ordnance within training areas that will over time degrade and release high levels of pollution into the environment. 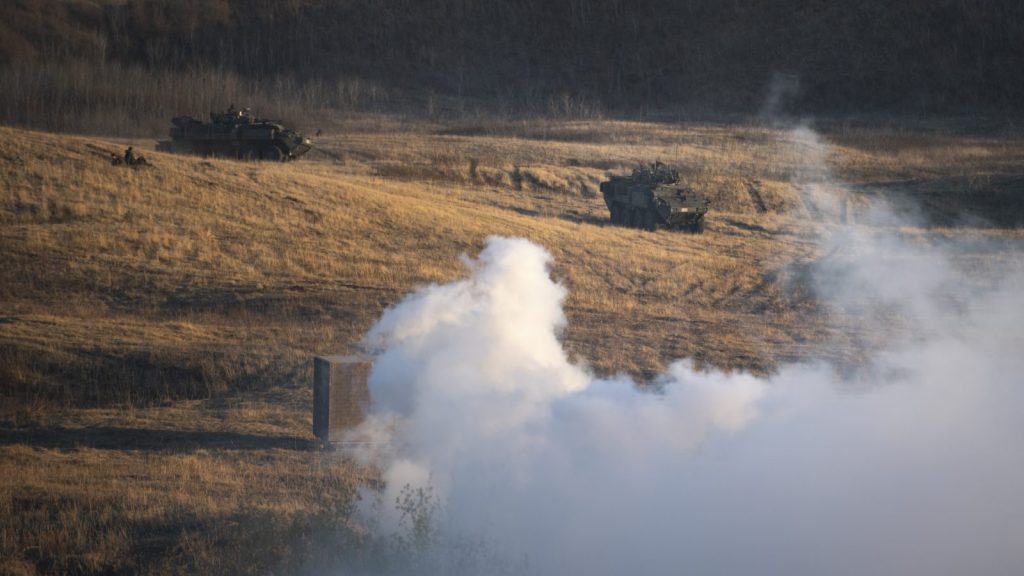 Two LAVs travel into a mock village during the final simulated firefight during Exercise Maple Resolve in Wainwright, Alta, in May 2021. Photo: Cpl Rachael Allen

Major Nickoloas Kriaris, the program director for the Commercial Recapitalization program at Director Land Requirements (DLR 6-2), is responsible for identifying what might be called the Army’s non-military vehicles: the sedans, mini-vans, commercially available pick-ups and so on. “If it’s not painted green,” he says, “it usually comes through us.”

Over the next few years, he plans to make recommendations for 561 of these light duty vehicles. And he’ll aim to make sure they are as green as possible. The Army follows DND targets that seek to have commercial light-duty vehicle fleet purchases comprised of about 50 percent zero-emission vehicles by 2023. How that is achieved can vary. For each category, “if a hybrid vehicle is available, I select that,” he explains. “If a vehicle is a plug-in, then I go with that. If the vehicle is a battery electric vehicle, a Tesla or something in that concept, I’ll recommend that. But I make sure that we have the infrastructure to [operate] that.”

There are a few caveats. For one, many categories of vehicle – he cites the three-quarter ton truck as an example – have as of yet no green options. “’If available’ is a huge asterisk in any of these kinds of conversations,” he says. So too is ‘when.’ Companies limit the times of year when they offer fleet sales and trying to juggle your green priorities with what they are selling can be a challenge.

The next few years will see an increase in the variety of green vehicles, says Kriaris, which will make his job easier. He has been looking at electric snowmobiles, ATVs, and even heavy trucks. “We have not committed to electric anything in the context of heavy equipment. But we are looking at them and trying to understand the impact.”

National Defence is the largest landholder in the federal government – some 2,000,000 hectares – of which the Army’s 16 establishments and satellite locations account for the largest share. The biggest of these establishments, CFB Suffield in Alberta, covers 2,700 square kilometres; CFB Gagetown, the second largest, covers 1,100 km2. Shilo, by contrast, is a relatively modest 450 km2. These bases include extensive road networks and numerous buildings, but many also contain large natural areas, including ones that are often home to rare or endangered plants and animals. Shilo, for example, can claim seven endangered species (including the skink), 10 that are threatened and 12 that are of special concern.

Véronic Pichard, an environmental advisor to the Army’s Director of Land Environment (DLE), says that each establishment has a “wildlife-at-risk workplan to support compliance with statutory requirements and to ensure due diligence with regards to [the] Species at Risk Act, Migratory Birds Convention Act, and other listed species in all Army projects, activities, and operations.”

Each plan, she says, “identifies what species are at risk and what kinds on measures they have to apply to protect them.” As an example, at Suffield, where several such measures are already in place, vehicles moving through areas that are home to various amphibians and turtles are required to obey lower speed limits to protect them. Different bases, facing different challenges, would have their own solutions.

Pichard emphasizes that training areas like Wainwright can never be untouched, pristine environments like a national or provincial park. Training and other military requirements must come first. But with some care, the Army can make a space where, to mangle the old song, the deer and the antelope – and the skink – can play. 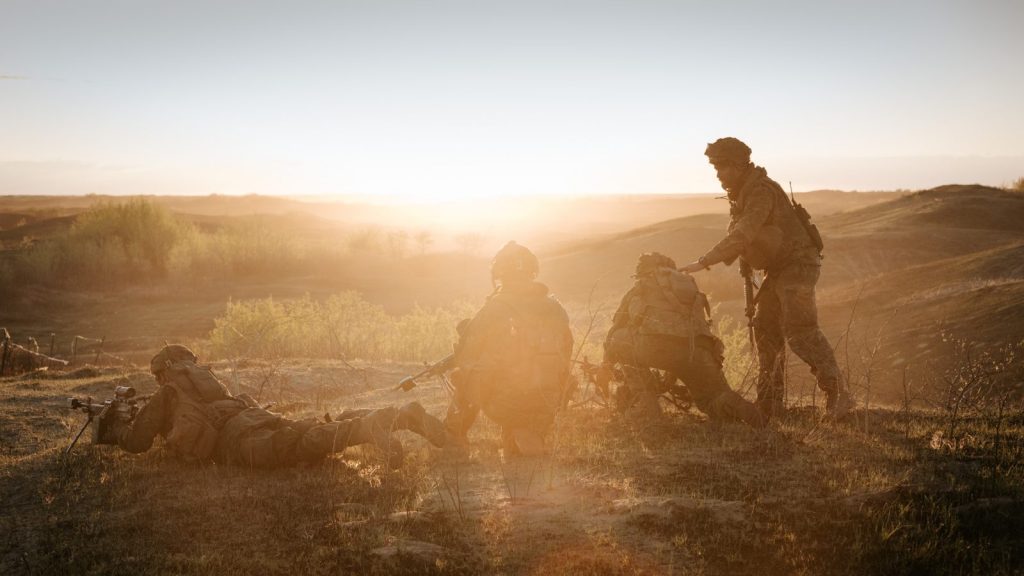