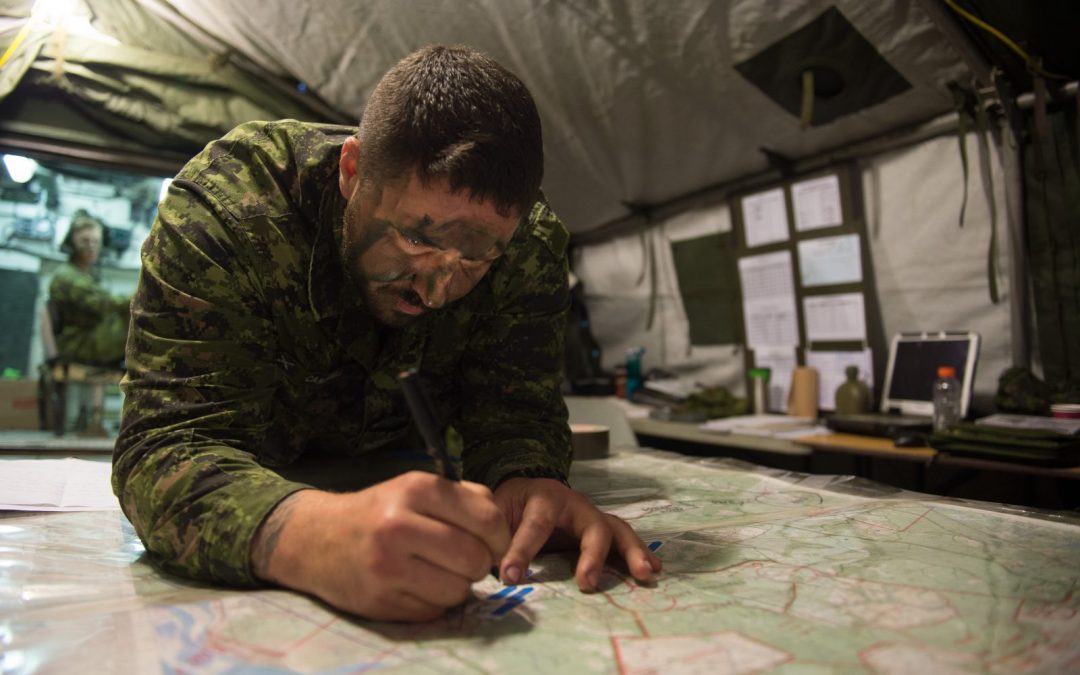 As far as anyone knows, none of the units of the Canadian Combat Support Brigade (CCSB) possess mutant powers – nobody can teleport, manipulate weather or bend metal with their minds. Still, when your soldiers are practitioners of electronic warfare, influence activities, intelligence analysis, unmanned flight, and can establish a headquarters in the most austere environments, you tend to view them in a different light.

“I like to refer to the organization as the X-Men of the Canadian Army,” said Colonel Marc LaFortune, commander of the Army’s newest brigade. “They have a speciality, not a superpower, but they have a skillset that is not found anywhere else.”

Admittedly, CCSB is not your conventional mechanized brigade. No tank or LAV battalions here. Rather, it is home to the “enablers” that those brigades and battle groups rely on to conduct operations. None leave home without at least some element of CCSB attached.

In fact, when LaFortune assumed command in 2016, the brigade had been known as the Canadian Army Enablers Group. On Oct. 4, 2017, the CCSB was transferred from the Canadian Army Doctrine and Training Centre (CADTC) in Kingston to 5th Canadian Division, headquartered in Halifax, becoming the first Regular Force brigade to serve under the command authority of the division responsible for units across Atlantic Canada.

More than a name change, the transfer of authority moved the brigade from what is often referred to internally as the institutional Army, to the field force. Though many of its units were operational – several were critical to operations in Afghanistan – the CCSB had previously been under the umbrella of the training system.

“Enabling was a precursor name for this organization,” said LaFortune. “Our responsibility is to enable commanders. Those unit’s specific skillsets are one-ofs … but this allows us to take all these units that look different, but have a great number of similarities, and bring them under one organization.”

Initially, CCSB began with the Canadian Army Intelligence Regiment and the Influence Activities Task Force under its command. Both had been part of the Enablers Group along with the Peace Support Training Centre, which in addition to its UN training curriculum, also had courses on aspects of influence activities, including civil-military cooperation (CIMIC), psychological operations (PSYOPS) and information operations. 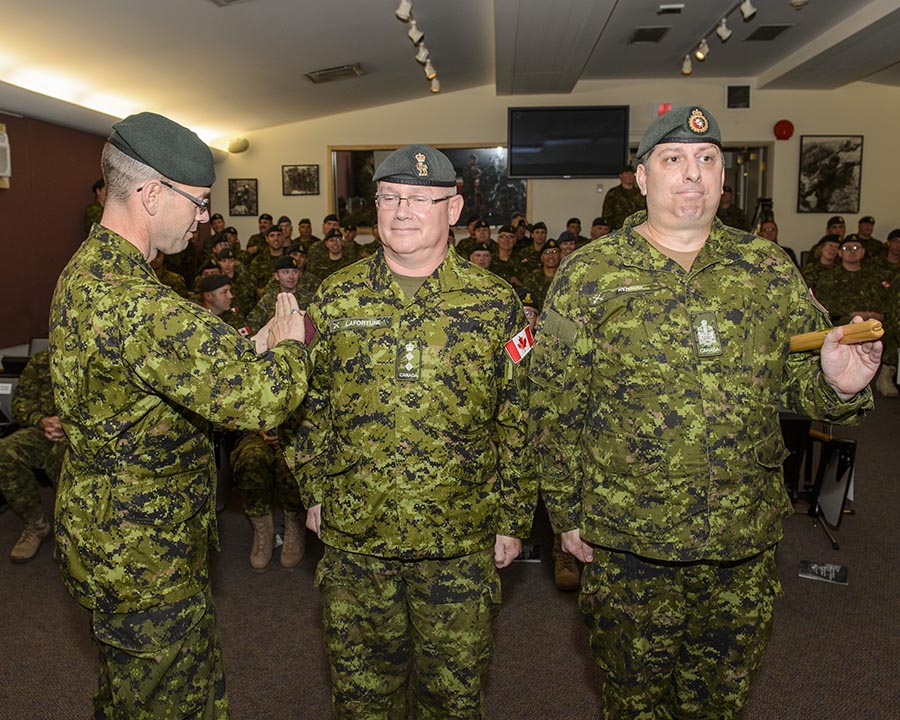 On Apr 1, 2018, the brigade expanded with the addition of 21 Electronic Warfare (EW) Regiment, formerly under 4th Canadian Division in Toronto, and 4 Engineer Support Regiment and 4th Artillery Regiment (General Support), which was already reporting directly to 5th Can Div. Throughout, CCSB also added personnel to its headquarters in Kingston.

The amalgamation of varied specialist skills under one command was the result of a debate that had been ongoing since the Army withdrew its brigade headquarters from Afghanistan in 2011. Many of the enablers had attained prominence during the conflict, with the introduction of the All-Source Intelligence Centre, operations supported by land-based electronic warfare, and CIMIC and PYSOPS efforts among the Afghan people.

“CADTC served as the petri dish for our evolution,” said LaFortune. “[But] we had been examining how to package those enablers to best support our clients, the Regular Force brigades and 1st Canadian Division headquarters. The change made sense, because it is the field force that we support.”

Like the rest of the Canadian Armed Forces (CAF), the brigade is in competition for people and resources. But its retention challenge might be unique. Rather then fending off the commercial sector targeting highly specialized personnel, the CCSB faces competition from within the military for hard-to-find specialists.

“Our trades within CCSB are in high demand across the CAF,” said Chief Warrant Officer Jim Smith, the Brigade Sergeant Major, noting that top intelligence operators, communications researchers and signals personnel are widely sought after by organizations like Canadian Joint Operations Command, Special Operations Forces Command, and Canadian Forces Intelligence Command. Influence Activities, which doesn’t have a defined trade, has members in every division across the country and increasingly on every operation.

“There aren’t enough of these folks to go around,” said LaFortune. “It takes some time to build the right intelligence operator, the right electronic warfare operator, the right SUAS (small unmanned aerial system) operator. Across the board within the enablers of the brigade, there is a demand outside of the Army that is looking to these same skillsets to support other activities.”

With modernization projects underway for many of its capabilities like ground-based air defence, electronic warfare, medium range radar, and influence activities, preservation of those skillsets may lie with its Reserve members.

“21 EW Regiment is a mix of Regular and Reserve as is the Intelligence Regiment,” observed LaFortune, “so the Army is really looking to its Reserve component to help grow these capabilities.” 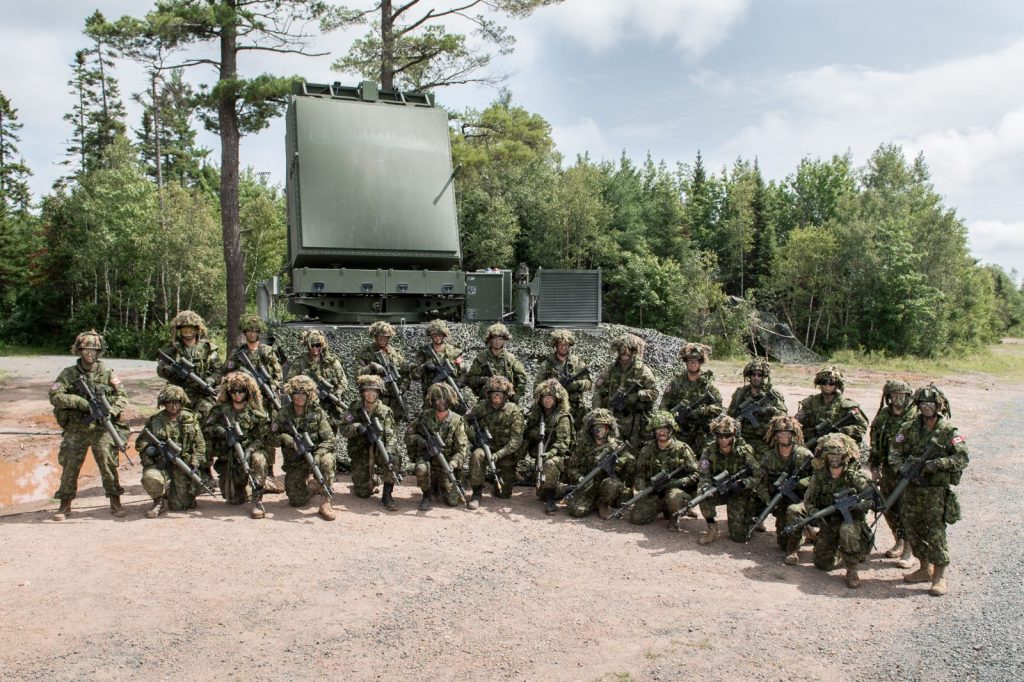 The demand for people with the right technical skills is complicated by the fact that most of the brigade’s units are almost continuously employed. Intelligence and Influence Activities (IA) personnel are permanently embedded and train with 1st Canadian Division headquarters and in organizations like the Joint All-Source Intelligence Centre, while members of 4th Artillery Regiment (GS) are either embedded with the brigade on operations or the brigade on the road to high readiness. In particular, the intelligence, surveillance and reconnaissance capabilities of the nascent CU172 Blackjack SUAS will almost certainly be a mandatory requirement for deployed commanders. The regiment, however, has just one system of five aircraft and ground stations at the moment.

“I think that is a peculiarity of CCSB – we are continuously in high readiness,” said LaFortune. “That’s okay as long as we understand that we can only do so much with what we have. We have to understand that if we are going to do concurrent missions with these enablers, we can only sustain that for so long.  These are issues that are reflected within the brigade and in each unit.”

At present, CCSB has around 60 personnel deployed on operations in Latvia, Iraq, Africa, and elsewhere. “We don’t have significant troops deployed on a rotational basis as we did in Afghanistan, it is much smaller packaging, but all units have at least a couple deployed,” he said.

With the brigade now well established, the next step is collective training. Each unit, of course, trains regularly on its own and often with the mechanized brigade groups, but up until recently there have been few opportunities to collaborate together. In November, a number of the enablers were added to Exercise Nihilo Sapper, an annual 4th Engineering Support Regiment exercise in Atlantic Canada, marking the first brigade-like exercise.

“An evolution of collective training of enablers will result in better packaging, which will then result in better force employment,” said LaFortune. “If folks who are part of the same brigade get to know each other early on in the mission and build that understanding of who does what within the brigade, it will help build a bit of corporate knowledge of who they are and what they do collectively.”

In that vein, Smith is leading an effort to develop a brigade badge to help build a more recognized brand. However, where other brigades are identified by grounded animals like the ram, bear and lion, CCSB has selected the peregrine falcon.

“What we do transcends the battlefield and encompasses the whole battlespace, including the information environment,” said LaFortune,” so we decided on a native Canadian bird that is not land-bound.”

The falcon could soon be on display at venues such as Exercise Maple Resolve when the X-Men of Canadian Combat Support Brigade bring their unique talents – SUAS, medium range radars, EW, intelligence and engineer assets – to a brigade exercise.