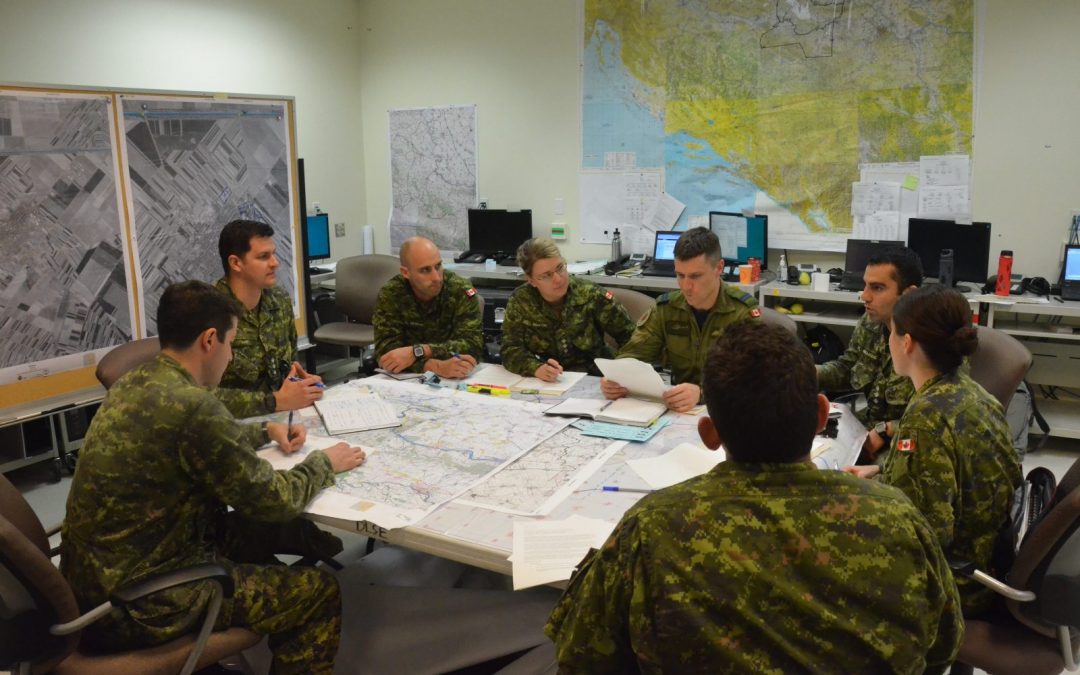 You might think that after two decades of counterterrorism, counterinsurgency and hybrid warfare, the content of the Canadian Army Command and Staff College (CACSC) courses would have changed significantly to reflect a changing reality on the ground. But in a world where what was old is new again, as the Army prepares for conflict with a near-peer adversary in a context not too dissimilar to the Cold War, little has changed to the core coursework.

“While aspects of conflict have changed throughout the duration of the Staff College’s existence, our mission has been relatively consistent in that we train staff officers, primarily, in how to become planners and operators, regardless of the operating environment,” said Colonel Tod Strickland, who became Commandant of the College in November after serving as Deputy Director for Operations for United Nations Command in Korea. “Because we have to teach doctrine, to give planning staffs a common language that they can use as they carry out their day to day activities, it’s actually amazing how much of what we’re teaching has been constant.”

The College was stood up in 1942 – it traces its roots back to the creation of a militia staff college in 1905 – with the task of preparing officers and non-commissioned members for employment in command and staff positions at the tactical level. Programs range from the Army Operations Course for Regular Force and Primary Reservists, to the Unit Command Team Course, Primary Reserve Unit Command Team Course, Joint Tactical Targeting Course and Collateral Damage Estimation Course, among others.

While the basic instruction modules have evolved to match the contemporary operating environment, the doctrine and historical context students receive is intended to “establish the elementary tools they’ll need to adapt to whatever situation they find themselves in,” said Strickland.

“They’ll recognize that hybrid warfare, as much as parts of it are new to us, has been going on for a very long time and it is far more important to arm yourself with a lot more knowledge about the culture of where you’re going and how our own biases affect our understanding and our perception of situations. Hybrid warfare is really messy.”

Rather, the College instills an appreciation for working in what he called “the grey” and provides a series of tools, such as the Combat Estimate and the operational planning process. Elements of the hybrid nature of conflict will be integrated into training exercises, but the greater importance is recognition of ambiguity in what the Army does.

“Nothing is black or white. That message is consistent between the Army Operations Course, where we’re training captains, but also the Unit Command Team Course where we’re training Commanding Officers and Regimental Sergeant Majors for their responsibilities,” he said. “Decisions are really easy when it’s a black and white world. But more often than not, we’re operating in a volatile environment where you don’t know necessarily how things are going to evolve. So the very first thing is being comfortable with the grey.

“I can tell you from my personal experience, I never thought that what I was taught on the Transitional Command Staff Course, which was the forerunner to the Army Operations Course, would be useful in Afghanistan. But the reality is, what we are taught on that course enabled us to be successful, in my case for the next 20 years in areas as diverse as Afghanistan to Bosnia to Korea. It’s really amazing the flexibility that the tools have.” 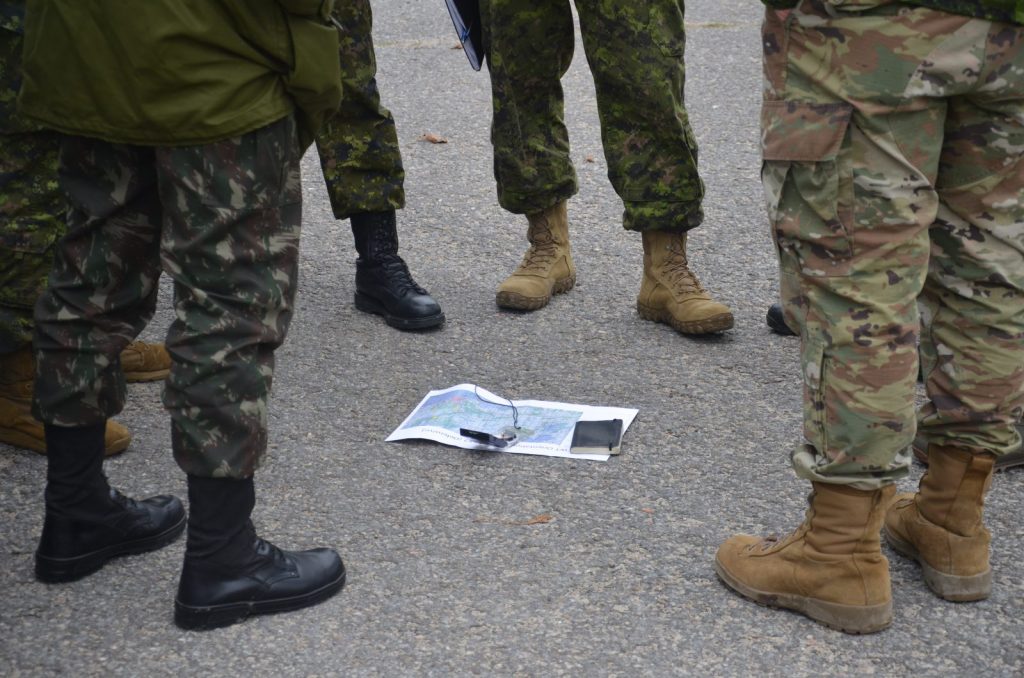 If there is a constant to what the Staff College teaches, how it teaches is changing to capitalize on technology and new methodologies. Paper maps and movable icons still dot bird tables in training exercises, but the College is exploring how best to accept and utilize the ubiquitous presence of cellphones in the classroom, the vast range and depth of web-based resources, and opportunities for more distance learning.

In part, the changes are a response to a student population more comfortable and expectant of technology. But they also align with the digitization of Army command posts and headquarters in which the students will serve.

Better understanding technology and how students now learn is “something that we are focusing on,” said Strickland, a former student and instructor in the U.S. Army’s School of Advanced Military Studies in Fort Leavenworth, Kansas. “In some ways, it’s kind of ironic because as good as those things are, sometimes just gathering a bunch of students around a map with models and doing a tabletop exercise can be the best way to get understanding.

“More often than not, the officers and NCOs that we train have to translate their understanding of a situation into physical effects in a very real environment. So, using tabletop exercises or tactical exercises where they’re walking the ground and examining the area are going to be with us for a good long time,” he said.

“However, we have to harness the ability to put those into video so that we can take students that we’re teaching at a distance and give them a similar perspective of the ground, even if they don’t have the occasion to walk it. Ultimately, we have to teach in a language that students understand. And if that means we have to adjust our methodologies to allow more digits in the classroom than might have been done previously, then that’s what we’ll do.”

Earlier this year, the College began incorporating the Decisive Action Training Environment (DATE) into its training, adapting the terrain, scenarios and supporting documentation to the specific requirements of the Army Operations Course.

The first time through was not without its challenges, acknowledged Strickland, but “one of the beauties of DATE is it allows us to run a constant scenario from the first exercise we have the students go through till the very last one. And instead of learning multiple orders of battle and multiple pieces of terrain, the students can focus on learning the doctrine and the tactics and apply it to a given situation. Our fervent hope is it will help the learning outcomes.”

The College is also eyeing opportunities presented by the Canadian Army Doctrine and Training Centre’s vision for a Future Integrated Training Environment (FITE) and what a network of training facilities and simulators might mean for enhanced distance learning. The Primary Reserve Army Operations Course, for example, is a year-long endeavour for candidates from across the country that only brings them together at the end for a summer residency. “Perhaps by harnessing an integrated training environment, there are different ways to do it,” he noted.

“If, by linking our training with someone else’s training, it results in a better student outcome, then I’m all in favor of it,” he added. “And if it results in saving resources, I’m in favor of that. There are some challenges, but we’re still looking at those. There’s great potential, though.”

One idea would be to expand the staff ride concept of studying a campaign or battle to understand how and why decisions were made, by converting the relevant information of photos, maps, log books, diaries, battle orders and other material to a digital or video format that could be readily shared.

“There’s some great virtual staff rides out there that could be used by a unit to train at a distance from a staff college using new technology,” he said. “We’re looking at the Battle of Ortona right now, as well as the battles of Cyprus in 1974, as it’s the 45th anniversary. It’s an incredible tool for teaching understanding of the basic tactics and doctrine.”

The greater use of training and learning dispersed over geographic distance would also align with the Army’s operating concept, Close Engagement, which emphasizes dispersed operations, he noted.

But for all the virtues of virtual reality, the residency portions of courses are an opportunity to meet face-to-face and “take the measure of one another,” said Strickland. “I don’t think that can be underestimated. It’s very hard to establish trust at a distance. At the end of the day, what we’re doing is not a new skill or a skill that is reliant on technology. To be a good staff officer is to be able to take raw data, raw information and turn it into knowledge that can then be used by your commander and exploited by your team.”

Consequently, it’s the quality of the student more than the teaching methodology and technology that will determine success.

“You need people who are curious and look at their perceptions and try to understand the world and what they’re facing,” emphasized Strickland. “Whether it’s a rifle company commander trying to look out and understand a defensive position or a logistician trying to interpret the demands on a supply chain, there needs to be an element of curiosity, intelligence and initiative that all come together during a period of high stress where you really can’t afford to make mistakes or fail.”

He is putting a lot of emphasis on trying to generate that curiosity and the structures that would allow units to guide the self-development of their officers.

“While formal professional military education accomplishes some things, there’s always things that are left out. We are subject to the systems we have in place, but there are always gaps,” he said. “If we can develop curiosity in our officer corps and in our NCO corps so they see these gaps and then explore ways to minimize them and enhance their own understanding of a given problem set, then that’s a win for everyone.

“It’s very cool to me that over the past 80 years or so that the Staff College has existed, we’ve relied on folks between 25 and 35 years of age with a limited range of experience to come together, study problems together, develop that network, develop that trust, and then go forth and do some amazing things. The Staff College has been in some ways foundational to the successes of the Canadian Army since 1942.”