Under the influence: Exercise scenarios prepare brigades for operations near Russian border 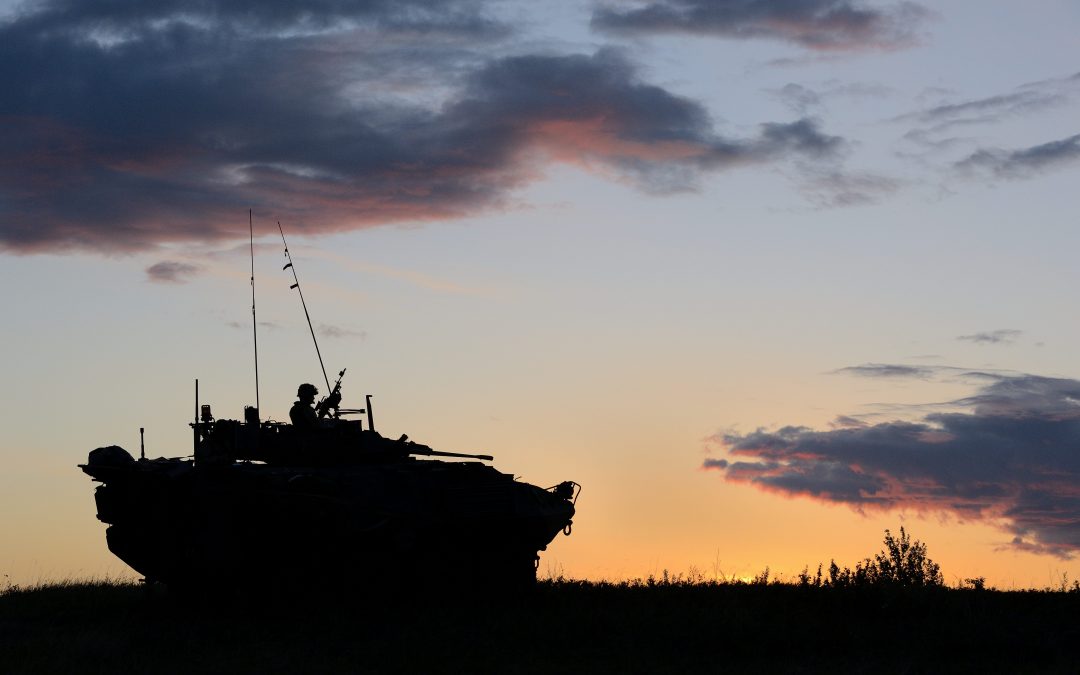 The road to high readiness is paved with exercises intended to prepare a brigade and its supporting units and tactical aviation to conduct full spectrum warfare.

Until 2014, those exercises had a specific focus – the mission in Afghanistan. Training scenarios often covered the full range of possible missions – humanitarian assistance, peace support, combat – but the nuances and complexities of counter-insurgency dominated the certification component.

Collective training may have returned to the broader focus of a war rather than the war, but soldiers of 2 Canadian Mechanized Brigade Group (CMBG) felt the distinct influence of Russian operations during their Road to High Readiness (RHR) preparation to become the Army’s standby force for worldwide deployment.

In June, the Army stood up a Canadian-led multinational battlegroup in Latvia comprised primarily of soldiers from 1 CMBG, based in Edmonton. The Army also has a training mission in Ukraine and recently concluded a land task force in Poland. So an Eastern European flavour to two key certification exercises, Unified Resolve in February and Maple Resolve in May, was probably expected by Petawawa-based 2 CMGB, the next in line for deployment.

Still, both exercises pushed the brigade with a range of cyber attacks, phishing expeditions and social media disinformation campaigns as it conducted combat operations against a formidable enemy.

“When we were in Afghanistan, we knew exactly what the soldiers would be facing, and we built the scenarios around that environment,” said Colonel Peter Scott, commanding officer of the Canadian Manoeuvre Training Centre (CMTC), which leads both exercises. “Now we are training for a war. We need to train to the far right of that spectrum, so full combat, with some humanitarian assistance [and counterinsurgency]. The logic being that our soldiers will be able to pull the levers necessary to pull back and roll into whatever type of situation they may face.”

Unified Resolve is the Army’s premier formation-level exercise and its largest computer-simulation training event, and served as the certification for 2 CMBG’s headquarters staff and artillery and engineering regiments and service battalion. Maple Resolve, the culminating test on the RHR, confirmed the brigade’s three infantry battalions and armoured unit, as well as its supporting tactical aviation. 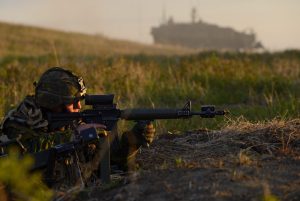 While the primary objective of the RHR is to ensure the brigade, from its headquarters to the individual soldier, is combat effective, the training missions of Iraq and the Ukraine, and the possible peace support operation in Africa demand a more varied skill set. Engaging with local populations and civic leaders, countering criminal activity and insurgency, or assisting during humanitarian crisis and natural disasters require a wide array of role players, real and simulated, in each exercise to deliver a realistic training experience.

Preparing for Latvia, though, has required more emphasis on cyber and social media. Countering electronic intrusions into the network and responding to activity on Fakebook, a Facebook-like social media channel, were almost as time consuming for commanders as manoeuvre operations.

“As we move to the Latvia mission and we know that the Russians like to use the media to create those fake stories, we are playing that on the exercise,” said Scott. “Probably not to the scale that we would like to, but that is something we will continue to develop in the future.”

Both Unified and Maple Resolve were set in the Caucuses, in the fictional countries of Atropia and Ariana. In the scenario, 2 CMBG entered a conflict on the side of Atropia, a Canadian ally since the 1990s, after long-simmering tensions between the two neighbours, in part over oil and hydrocarbon resources in the Caspian Sea, erupted into war when Ariana began a military campaign across their shared border to “liberate” Atropian citizens with ethnic ties to Ariana.

The conflict included disruptions of Atropian public and private computer systems; the emergence of an insurgency called the South Atropian Peoples’ Army that began attacking Canadian logistics convoys and lines of supply as it sought an independent state straddling the border of southern Atropia and northern Ariana; a crime family that took advantage of the chaos to further its goals; and over 15,000 refugees.

While the combat operations required much of the brigade’s focus and strength, many of the injects and what LCol James L’Heureux, the exercise director, called day to day frictions, drew on its other assets.

In one, a crime family acquired and used a chemical agent similar to mustard gas on part of a convoy, forcing the battlegroup commander, at the time focused on preparing to cross a river and destroy enemy targets, to also manage and decontaminate critical pieces in his rear element needed for the attack. 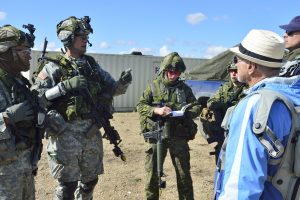 In another, the brigade was required to resolve a possible conflict with a religious leader when an imam leading over 10,000 followers planned a pilgrimage through the brigade’s manoeuvre space. Under the Army’s new doctrine on religious leader engagement, a chaplain was deployed to find a solution.

“They had to engage at the right level, they had to get command decisions from Canada, they had to incorporate various aspects in their planning, and they had to send the brigade padre to diffuse the situation and offer alternatives,” explained Bart Gauvin, an activity lead with the Canadian Army Simulation Centre (CASC), a team of experts responsible for much of the exercise design, development and delivery of Unified Resolve. “It provides depth and foists some reality onto the training audience and reminds them they are not doing this in isolation.”

Other injects included responses to human trafficking and child soldiers, in line with newly developed Canadian Armed Forces doctrine, and a mass casualty incident following the downing of a CH-147F Chinook helicopter that required the immediate response of a lot of resources.

“We present complex issues that force the commander to have to make decisions and alter their plans,” said L’Heureux. “We make sure they can handle multiple problems that compete for very finite combat power and resources. The goal here is to see decision-making and analysis before the decision is made.”

Fakebook, though, presented a new twist. Each battlegroup had its own page and soldiers were able to post imagery and text to try to influence local populations by countering enemy activity such as taunting videos or disinformation.

“We are teaching people to master the social media domain and use it on operations,” said L’Heureux. “People equate this to what they put on Facebook at home and you need to be extremely careful with consistency in messaging and consistency in narrative. You can’t do it off the cuff. You’ve got to make sure you are saying something that is in line with strategic messaging, and that can be a little daunting at first until you get comfortable with it. I would offer we need to train more because as a military we are just learning how to harness this.”

The threat of phishing expeditions was also prevalent throughout both exercises. In one inject during Unified Resolve, an email with a subject line about a military pay raise caused many in the headquarters to click a link – some even forwarded it to family members.

“Had it been a real spearfishing event, their unclassified network would have been compromised,” said Gauvin. “We had well over a 1,000 injects and that was one of the simplest ones. But it was one they weren’t expecting, and it caught them.”

Training experiences like that pay off on operations, said Major Spencer Sharpe, deputy commander of the recently concluded Land Task Force in Poland. The ubiquity of unmanned aircraft near the borders with Kaliningrad and Belarus required the task force to adapt to the reality of “being filmed every day” by adopting low level mitigating tactics such as better camouflage. Likewise, persistent text messages on personal phones requesting documents or providing links necessitated good cyber hygiene. 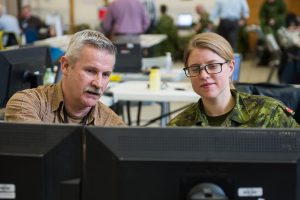 For soldiers now deploying to Latvia, he advised parking egos at the door and being willing to learn. “We might be proficient in the field but we might need to learn an ally’s TTPs. This sort of threat is new, [but] everyone else has dealt with it or lived with it for a lot longer than we have.”

The conflicts of the Cold War are foreign to many serving members of the Army. Consequently, much of the institutional memory for how to conduct operations against a near-peer in a NATO context resides with the experts at CASC, a team heavily comprised of Calian Training contractors like Gauvin, a retired artillery officer with 38 years of experience, including four with NATO’s Allied Rapid Reaction Corp.

“A lot of the training audience now, certainly at the brigade level, wouldn’t have [experienced] the Cold War,” said LCol Scott Morrison, chief of the formation training detachment at CMTC during Maple Resolve 2016. “The Calian guys have lived through major combat operations; it is pretty critical to have them in our arsenal.”

The Army has adopted the Decisive Action Training Environment, a US-built training resource that offers extraordinary levels of depth to scenario building. That will help ensure the Road to High Readiness remains as realistic as possible. But with the troops now deployed on so many different and distinct operations, capturing and distilling all the lessons into one comprehensive exercise scenario will be a challenge, Col Scott acknowledged. “That is something we are going to have to work on.”