The trials of Prototype J 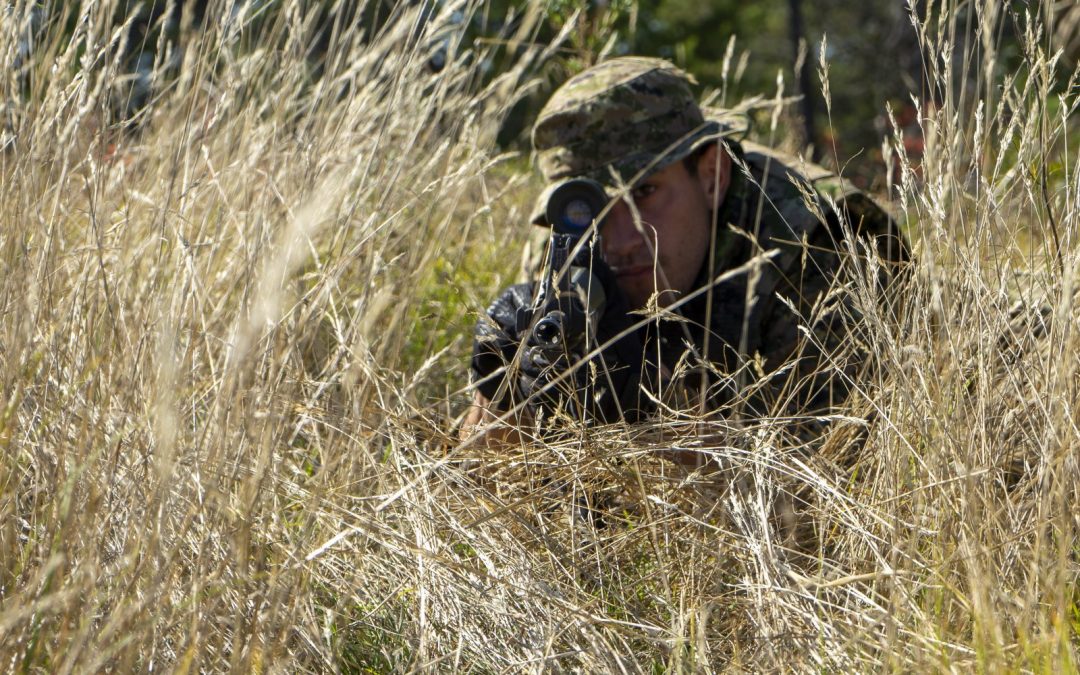 “Contact!” The shout comes from a soldier in the lead section of a platoon conducting an attack through the scrub, sand and small trees of Canadian Forces Base Petawawa. Behind him, soldiers quickly drop to a knee or lie prone, their weapons trained on the brush a few hundred meters away.

To the platoon, contact with the concealed enemy is just part of their training. But to the unmanned aircraft overhead, the soldier’s raised weapon is a signal to nearby defence scientists monitoring the video feed of how long it took to detect the prototype of new Canadian Army camouflage being trialed by the members of the 3rd Battalion, Royal Canadian Regiment (3 RCR).

Since early September, the battalion has been evaluating a new camouflage pattern known as ‘Prototype J’. In company and platoon exercises, soldiers have worn the uniform to see how well it performed while conducting operational activities.

For a week in mid-September, though, platoons from Mike, November and Oscar Companies went a step further, serving as live test subjects for scientists and engineers from Defence Research and Development Canada (DRDC) and the Assistant Deputy Minister, Materiel Group (ADM Mat). Using section attacks and other activities, the platoon was able to help collect data from the ground and from a drone to validate the pattern in different environments and to compare it against the in-service Canadian Disruptive Pattern (CADPAT) uniform.

The new pattern is part of a project known as Soldier Operational Clothing and Equipment Modernization (SOCEM) that will eventually replace the various layers of clothing and equipment normally worn by soldiers on operations, from undergarments and jackets to rain gear, helmets, body armour, tactical vests, small packs and rucksacks. (Canadian Special Operations Forces wear a MultiCam pattern not affected by SOCEM).

Once refined, the prototype would replace the current Arid Region and Temperate Woodland versions of CADPAT developed in the mid 1990s.

The project team and DRDC have conducted small tests of the pattern in the jungle outback of Australia, the desert of California, and among the woodlands of Valcartier, Que. But before they can make any recommendations to the Army, there are a number of questions that still remain, said Lieutenant-Colonel Ray Corby of the Directorate of Land Requirements.

“What is the effect of not putting the camouflage pattern onto various load carriage equipment?

Does all of our equipment need to be in the new pattern or does a coyote brown shade work? What capability, if any, do we lose if we do that?” he asked.

Corby also wants to better understand the signature the pattern generates when viewed by various sensors on a drone, and how it performs in urban environments.

“With the proliferation of unmanned aerial devices, I wanted that aspect looked at. With different types of ground underneath, what’s the effect on the signature of the group while they are moving?” he said. “And we can’t ignore urban operations in the selection of camouflage. That is a very tricky environment in which to blend, so we need to thoroughly measure our existing CADPAT and the prototype.”

While scientists can gather much of that data on their own, the Army wanted soldiers to be part of the evaluation process, he added. “They are skilled sensors, so to have them see the effectiveness of the camouflage works to our advantage in answering those questions.” 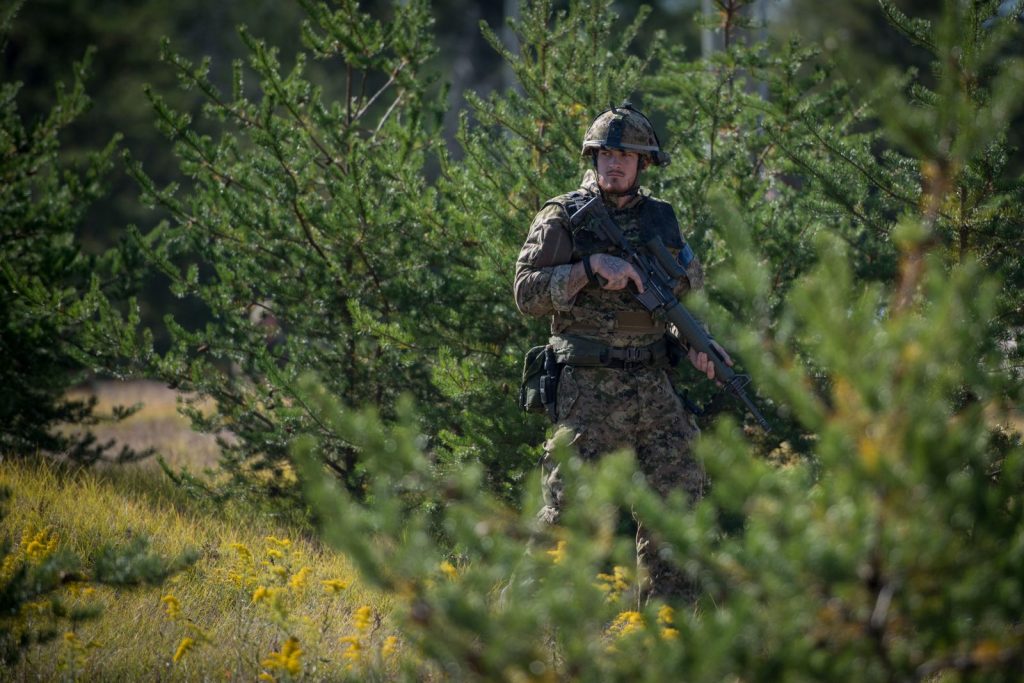 The new pattern camouflage is predominantly brown, with olive and only some of the dark green and black of the current temperate woodland CADPAT. The colours are intended to reflect what is found in nature, and the technology to refine them has included hyperspectral imaging to pinpoint the correct shade. But finding the balance of colour and pattern is as much art as science, admitted Steven Knapp of ADM Materiel and Jean Dumas of DRDC.

Their team began about a year ago with a “wide funnel” of design ideas and prototypes and have gradually reduced that to Prototype J. They discovered early on that combining the strengths of different patterns didn’t necessarily result in a better uniform. “Sometimes the average of something is nothing,” said Knapp. “It’s likely the number one best pattern for a specific environment will be the worst pattern somewhere else. We have to balance them.”

Consequently, they have sought to test each pattern against multiple operational backdrops, using visual and thermal imaging in the field and software analysis in the lab to refine the colours before they print each fabric. “The software has been fairly accurate, but when we bring it into the field, that is when we know for sure,” said Knapp.

Since the Army will likely phase in both new operational clothing and equipment, the research is also trying to determine any degradation in performance when the Prototype J uniform is combined with other patterns, including the legacy CADPAT. “We are looking to see if there is a change in detectability, good or bad, in the different environments,” he said.

New rifles and other personal weapons are being acquired under a separate program, but the Army used the SOCEM trials to gather data on the detectability of various shades of paint colour on weapons by airborne and ground sensors.

That attention to environmental changes wasn’t always apparent to the November Company soldiers asked to lie in the bright green grass near a barracks or walk around a building while a drone captured imagery. But if the Army wants a single pattern, it needs as much data as possible about the strengths and weaknesses. The aim is to “print the best camouflage that technology allows us to do,” said Dumas, who was involved in the original CADPAT testing over 20 years ago.

“We think we are pretty close with the colours—they blend well in the environments—but there is still some room for improvement,” said Knapp.

The final recommendation to the Army will include survey data from 3 RCR, but the “general feedback has been relatively positive so far,” said Lieutenant Stephane Prior, the November Company platoon commander for the trial. “When you compare this directly next to CADPAT, it is more of a subtle difference then I think we all expected. Once we get the rain jackets and all that in the proper pattern, it will be good.” 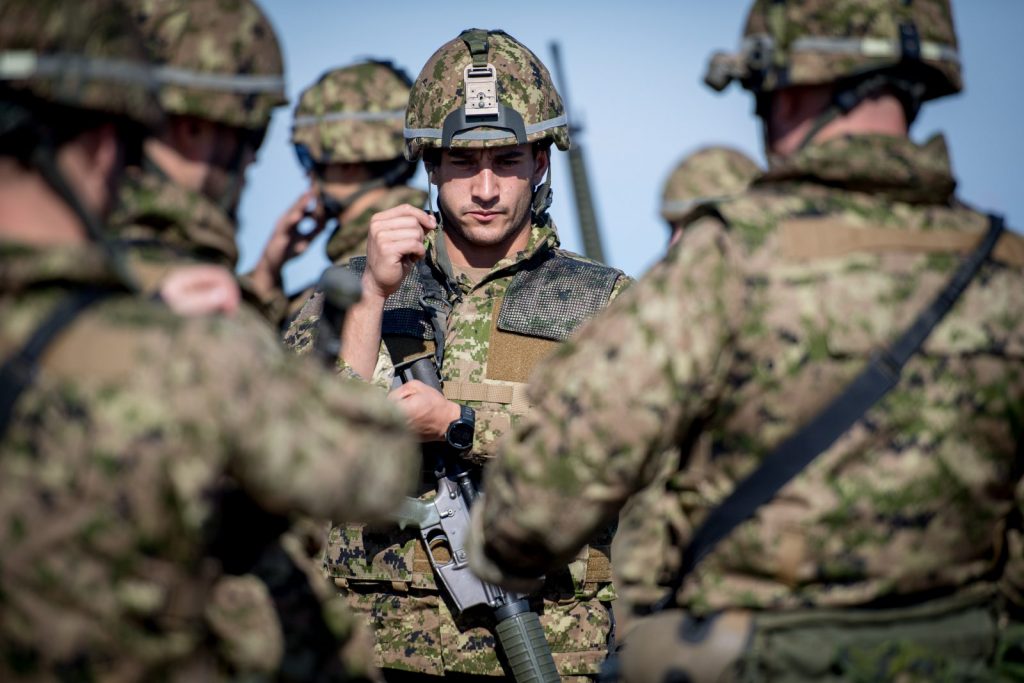 The change in uniform pattern is in part due to deficiencies identified by the field force and advances in textiles, said Corby. Most of the operational clothing and equipment was delivered over the past 20 years under the Clothe the Soldier program and some of it no longer “reflects what soldiers require and what they know is out there in the marketplace.”

The SOCEM project is not pursuing so-called smart textiles able to monitor human performance—it is steering clear of generating yet another electronic signature that could be affected by electronic warfare—but Corby is interested in ideas from industry that would improve durability, comfort, thermal management and increased protection, such as detection from infrared night vision systems.

“We have certain criteria around fire resistance and those qualities, but we think this is the initiative in which to ask industry to start proposing innovative solutions,” he said.

The end goal is a clothing and equipment suite with the functionality and modularity to work with any soldier so they do not feel the need to buy some of their own gear. (The Army will scan hundreds of soldiers in Petawawa in November to better understand current body shapes and sizes.)

However, that will require a different method of procuring and evaluating kit. Rather than one larger acquisition project every 10 to 20 years, Corby envisions a process to quickly select and purchase items that would be introduced across the Army in cycles, and could be refreshed every four to five years as industry rolls out new advances.

“There is always a bit of risk to making a quick decision, but if we don’t find a way to be more flexible, rapid and responsive to shifts in the industry, then we have Clothe the Soldier II, where we have the same equipment for 20 to 25 years and at some point we lose our capability edge,” he said.

He credited the DRDC and ADM Mat team with doing “phenomenal work in the past year to push what is possible with camouflage patterns,” and said resources like that and the Army’s Trials and Evaluation Unit could be used “to help evaluate equipment in the field” throughout the project.

The project has yet to receive an official budget, but the Canadian Armed Forces spends between $15 million to $25 million annually on operational uniforms. That’s generated a lot of interest from companies looking to integrate capabilities that have worked well with allies, and from Canadian companies with advanced outdoor and operational clothing, Corby noted.

“What is important for us is to break it down into different systems so there is an opportunity for [different companies] to propose solutions to various aspects of the SOCEM initiative. It doesn’t necessarily need to be one company proposing a solution to everything,” he said.

A letter of interest and a draft statement of requirements will be released this fall, followed by an industry day, but a final decision on the pattern isn’t likely until 2020. “It is probably not the 100 percent solution,” said Corby of Prototype J, “but I think at this point we are looking at just fine-tuning various aspects of it.”