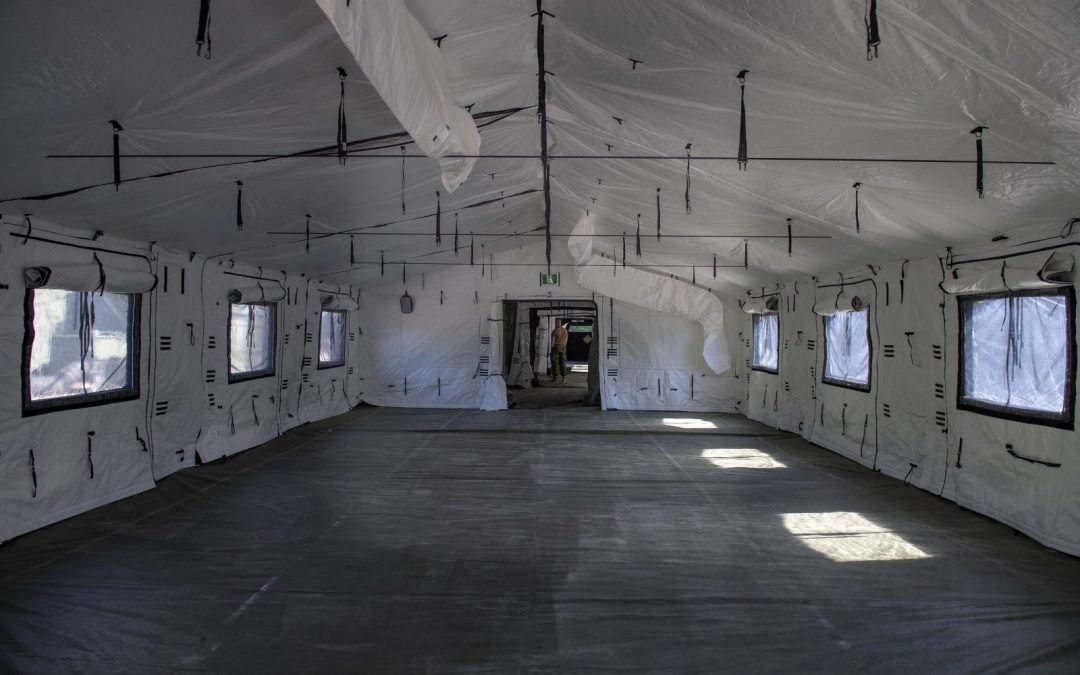 “One day. It only took one day.” That was all soldiers needed to decide the new Headquarters Shelter System (HQSS) was a worthy replacement for the aging but still capable Tent Expandable Modular System (TEMS) headquarters, said Captain Daniel Huot, project director for HQSS.

Initial cadre training in Petawawa in early 2019, where Weatherhaven Global Resources trained the Army’s trainers, quickly proved many of the advantages of HQSS, and others have become evident since.

The greatest difference between the old and new shelter systems may be deployability: The HQSS can deploy into any environment, from extremes of tropical heat down to -51 degrees Celsius due to a change in the material compounds of the PVC used in earlier systems.

“One of the main problems with the old PVC material was what we call ‘cold cracking’, anywhere below -40 Celsius, making the PVC variant often useless in Arctic conditions,” said Huot. With older shelter systems, units going north had to bring nylon shelters, and units in the south used PVC versions. “Now we can do both with one system.”

Weatherhaven, of Coquitlam, B.C., was awarded two contracts in 2017 worth about $168 million to deliver shelters and related equipment, as well as an initial five years of in-service support. The first shelter systems were delivered in July 2019.

The shelters are expected to be in service for at least 25 years, supporting Canadian Armed Forces (CAF) operations in Canada and around the world.

HQSS is a range of modules of different sizes, with a multi-directional hub-and-spoke connector capability, and all the ancillary equipment needed for almost any operational environment. The ancillary equipment consists of semi-rigid flooring; a tactical lighting system with power distribution, air conditioning and a heat pump called an Environmental Control Unit (ECU); a fuel-fired air heater; and cargo containers to store and ship the entire system.

Unlike older shelters, HQSS allows a wide range of field repairs and replacements, as opposed to units living with or working around faults in the TEMS until there were enough of them to send for repair.

The 1 Module is about 250 square feet, the 2 Module is about 500 square feet, and the 4 Module, the largest, is just under a thousand square feet. The four-door Hub Shelter is basically a central location where modules can be attached front to back and left to right. A Vestibule Module is a very small shelter that only has one door in and one door out, to allow tactical entry and exit.

HQSS doors use double, flat ‘hook and loop’ fasteners to close the top and sides. On the inside of the soft door is an L-shaped zipper. “But we have incorporated the option of a hard (light aluminum) door, so where the existing doors are in the modules, you simply unfasten them, roll them up and put them aside. Then you fasten the hard door,” said Huot. “This will be really convenient and time-saving for high traffic areas, but the flat fastener works just fine for lower traffic areas such as accommodation and doesn’t take as much cargo space when packed and ready to move.”

A couple of special tools will make living with the HQSS a lot easier. One of the big headaches when deploying the TEMS is hammering in the tie-down spikes and then extracting them. As many soldiers know, more than a few spikes were left in the ground if they were too difficult to remove. A new slide hammer tool will make insertion and removal much easier.

HQSS also comes with a snow, water and ice removal tool. “What we used to do in the past was take a broom and poke it from the inside. With this system, you can’t do that because there is a foot of space between the ceiling above your head and the fly, the solar shade that goes over the whole structure,” explained Huot. Now, soldiers will have a telescoping rake to remove the snow load. “We’re not that worried about the frame cracking because the shelter structure itself can sustain the weight of a pickup truck, but we do worry about the downward pressure eventually distorting the fabric out of shape.”

Shorter or lighter soldiers will also appreciate a Weatherhaven-designed pulley system that hooks into the top of the shelters’ struts. 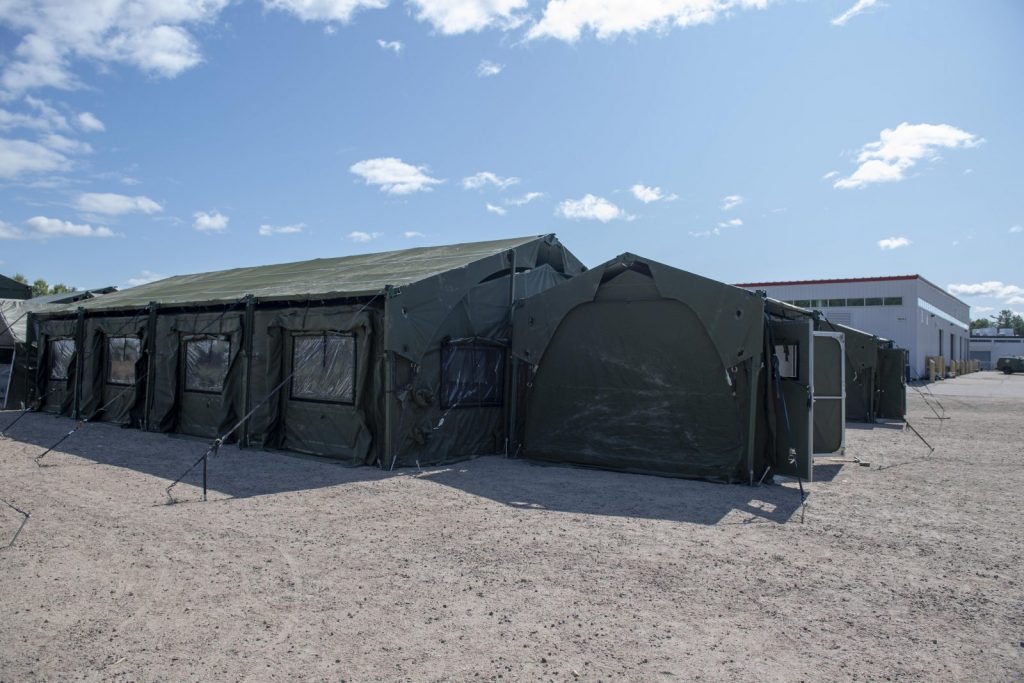 Tactical LED lighting allows a choice of white, green or emergency illumination, and a power cable drops down from each light. “When you set up your office, let’s say, the power is already there with the lighting,” noted Huot. “And an office system might have a dozen computers plus people charging lots of other devices.”

Unlike older shelters, the HQSS system is insulated. The insulation is detachable, so units in the field can take it out for cleaning or repairs; they can even pressure wash the walls inside without moving or detaching anything. During tests in Petawawa last summer in hot weather, with no cooling equipment running, troops noticed the cooler temperature inside because of insulation, he added.

Arriving in the field, the new soft flooring is not attached. “We wanted the sergeant-majors setting up their camps to have the option of getting their soldiers to lay out the flooring to see which configurations work best for the mission in that location,” said Huot. “The flooring lets them know exactly how the modules will fit together.”

The anti-skid soft flooring acts like a berm because it attaches to the walls with the flat fastener, so there is much less infiltration of dirt, dust, and insects. Between the passages, the flat fastening system at the entrances allows soldiers to attach the two shelter floors together and get a seamless joint.

“When you want to install the hard flooring, you just go from one room to the next over this seamless soft flooring,” explained Huot, noting that the jigsaw puzzle-like flexible pieces include solid panels, cable management panels with openings for networking connections, and doorway ramp panels. “That’s something we didn’t have before. In fact, the older systems didn’t have a floor at all. With this new system, everything can be pretty well buttoned down and zipped together.

“When Role 2E hospitals used to deploy, you would get a lot of contamination and when you’re supporting an operating room, that’s a problem. The HQSS sealed flooring combined with electrostatically welded seams instead of sewn together offers a huge reduction in dust and water infiltration.”

Another feature is the Vehicle Boot, which will allow almost any vehicle in the CAF inventory to back up into the shelter module, deploy stairs into the shelter, and then be sealed with curtains from above and below. “The HQSS system was very much designed to accommodate the new series of vehicles that are coming into service with the Army,” said Huot. “The biggest standard pattern trucks can integrate with HQSS. Let’s say you have a headquarters command post inside the back of the vehicle. You can have a set of stairs coming out of the vehicle down into the HQSS and still be tactical because the vehicle interface curtain stops light leaking out. That’s a big jump in capability.”

Huot and the project team are now working on attaching Mobile Expandable Container Configuration (MECC) shelters to the HQSS. “Especially with medical deployments, we’ll be able to keep the working environment much cleaner,” he said. 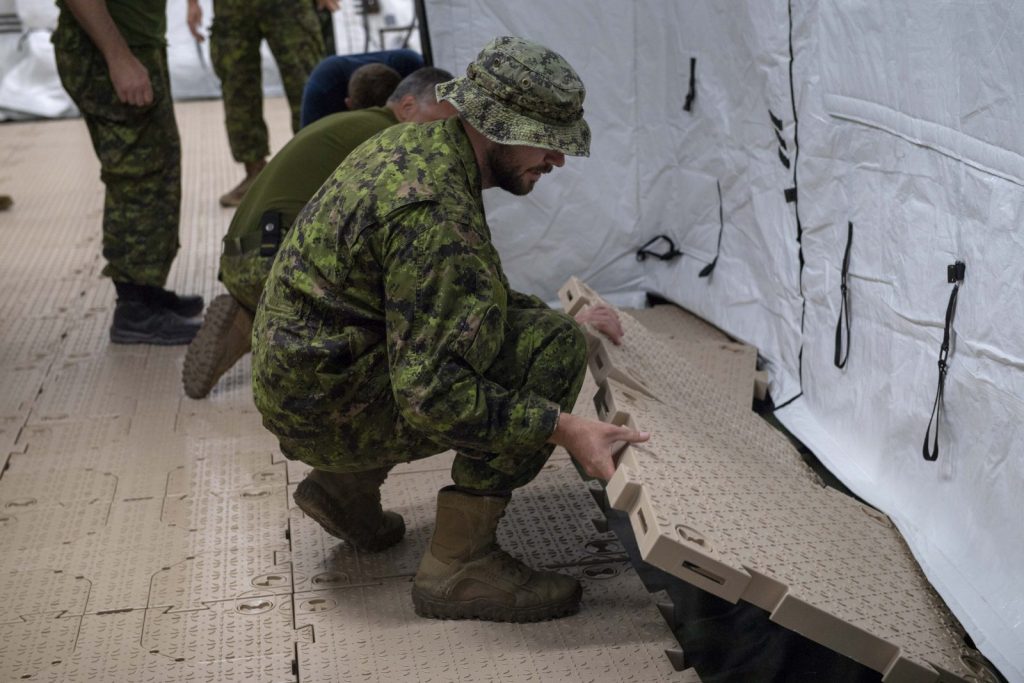 The HQSS will not completely replace the currently in-service TEMS. Units will continue to use the older equipment alongside the HQSS until new tactics, techniques and procedures have been developed and proven. The HQSS four-door hub has a TEMS interface, so both can be fitted together.

“There is really no reason to replace all the TEMS,” said Huot. In the field, units will be able to store surplus material inside a TEMS and put primary functions in the HQSS modules.

The significant advantage of the HQSS is the ease to deploy, especially for units where rapid deployment is paramount. Commanders and their staff may find the HQSS takes some more planning and coordination, but that’s a result of having more capability and flexibility to work with.

A CC-177 Globemaster III can carry two containers and the Role 2E hospital, for example, deploys in ten containers, meaning it can be anywhere with five flights. The Army has ordered almost a thousand sea containers to store and ship the HQSS, because supply personnel have been asking for more storage space. “In effect, no unit receiving the new system will have to sacrifice indoor storage space and the equipment that’s in it just to accommodate the new system,” said Huot.

“With their HQSS already packed and stored, units will be able to deploy much faster. Just bring up the Container Handling Unit (CPU) to load the trucks and you’re on your way.”