Taking the grunt out of the Grunt 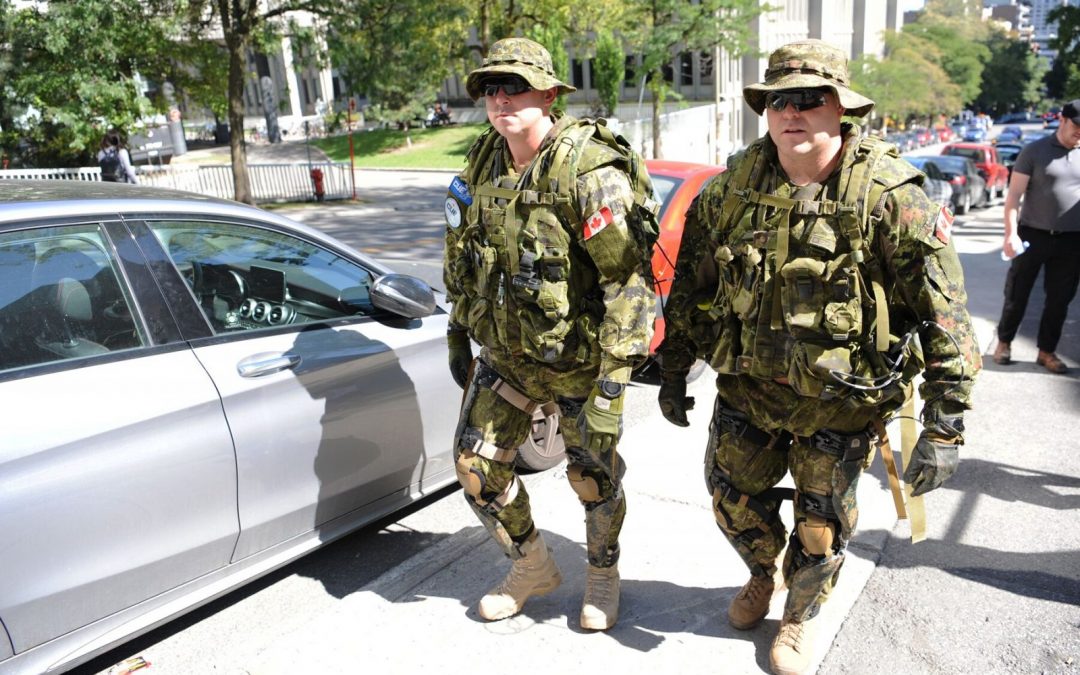 A full suit of medieval field armour weighed 20 to 25 kilograms, with the helmet accounting for two to four kilograms. A broadsword might have added two more. Compare that with the 34 to 41 kilograms the modern soldier has carried on recent ground combat missions.

Worse, the weight of medieval armour was distributed over the whole body whereas today’s soldier carries it mainly on the shoulders and back. A medieval knight also got to ride a horse whereas their modern counterparts must often “dog” it.

It’s no wonder, then, that the Canadian Army is exploring ways to lighten the load without compromising its troops’ effectiveness. Coordinating that exploration has fallen to LCol Steve Noel with the Director of Land Requirements (DLR).

“The genesis of this for us is that soldier burden always has been a problem,” he said in a recent interview. “It never gets better and this has been true for the last 3,000 years – from the time that soldiers started arming themselves in organized bodies, they carried their gear, their protection and their sustainment. We’ve never gotten it perfect; no army ever has.”

While the officially accepted maximum load is some 32 percent of a soldier’s body weight, circumstances can push the burden beyond that limit. Canadian troops fighting in the mountains of Afghanistan, far from supply depots, often carried 15 rifle magazines as opposed to the official battle load of five. That’s an extra five kilograms or so for a soldier already pushing the limit.

A long march through arduous terrain increases the physical challenge and can also degrade a soldier’s cognitive skills, potentially putting the individual or the unit at risk a long way from any support.

“Are we talking more injuries, what types of injuries?” Noel asked rhetorically. “Or are we talking about crossing certain pieces of terrain more slowly? Does that make that person more vulnerable to an enemy being able to target and actually hit them? And what about the effect on a commander or soldier to decide on a particular action because of the loads being carried?”

The ratio of 32 percent, understood to have originated in the U.S., is “sort of the limit everyone quotes today,” Noel said, adding that it obviously has more impact on smaller soldiers. “We are trying to crack this nut – the burden problem – to mitigate injury and make the soldier more effective by making kit lighter with new technologies and materials.”

But while the Army has a vested interest and is involved, it does not have a project per se. Rather, Noel is monitoring a wide array of research that has applications well beyond the military. “There is a large body of work by more than about 130 companies with various technology levels that I’m aware of,” he said.

“So, as a technology matures and companies start developing and producing things, we determine whether there’s a military application. If so, we want to incorporate that into everything we give our soldiers so that at least we don’t make things worse.”

Water-shedding rucksacks and clothing textiles are one part of the solution. So, too, are lighter weapons as manufacturers switch to composites from metals. A second part is simply having to carry less kit. “We would love to crack the code for lighter and better rations, less water,” Noel chuckled. “But we haven’t come up with a way to make water lighter.”

Which leads to the third part of the solution: enabling soldiers to carry the heavier loads with assistive technologies.

“There’s a whole host of companies looking at the exoskeleton solution. Is it powered? Is it passive? Within DLR, we maintain our tech watch and our discussions with companies, and with NATO.”

The Army is involved with three projects underwritten by the federal government’s Build-in-Canada Innovation Program, managed by Public Services and Procurement Canada. Carefully screened applicants can secure up to $1 million in federal support for a military-specific technology while still retaining their intellectual property.

Two knee-brace trials have been sponsored, one a purely mechanical partial brace that makes the knee joint better able to react under strain, an application out of the sports-injury world. It has been field-tested by the Army. The other is a brace that generates energy in much the same way as regenerative braking in the automotive world; it could be used to charge up batteries for communications gear or optics.

The third project is a full exoskeleton which is form-fitted to the soldier, mimicking what the spine and rest of the skeleton do. Not quite Iron Man technology, it transfers some of the weight down to the part inside the boot.

“The challenge, of course, is how it performs in jumping, crawling, walking or running. Also, it’s got to be something soldiers can put on and take off quickly, and it’s got to be compatible with whatever rucksack or body armour or vests we wear,” said Noel, who expects a functional prototype to be delivered in the near future.

Amazingly, this technology, which can reduce the effective burden by as much as a third, weighs only a couple of kilos thanks to carbon fibre and modern composites.

He said Canada is involved in a NATO program, started late last year, which is assessing the potential for exoskeleton standardization and the implications for interoperability. “If I bring an ally into one of our vehicles and he or she has an integrated suit, can they sit in our seats without taking off their equipment? Will they need to plug it in? What about its use on aircraft? Could ‘active’ equipment interfere with systems?”

The first workshop of the NATO Integration of the Exoskeleton in the Battlefield Project was held last November in Slovakia, giving the military, industry and academics a platform for discussion of “human performance augmentation,” notably the already available Mawashi UPRISE developed by a company in Saint-Jean-sur-Richelieu, Que.

That set the stage for a second workshop, in Belgium in early March, to study how available exoskeleton technology could be applied to explosive ordnance disposal suits.

“It’s a symbiotic relationship,” Noel said of the Department of National Defence’s links to the private sector. “If we are not talking to industry, keeping those doors open, and at the same time telling them what we want from a military application, they have no impetus to actually put their own R&D money into it. We can try something, tell them the pros and cons, and they can then modify it.”