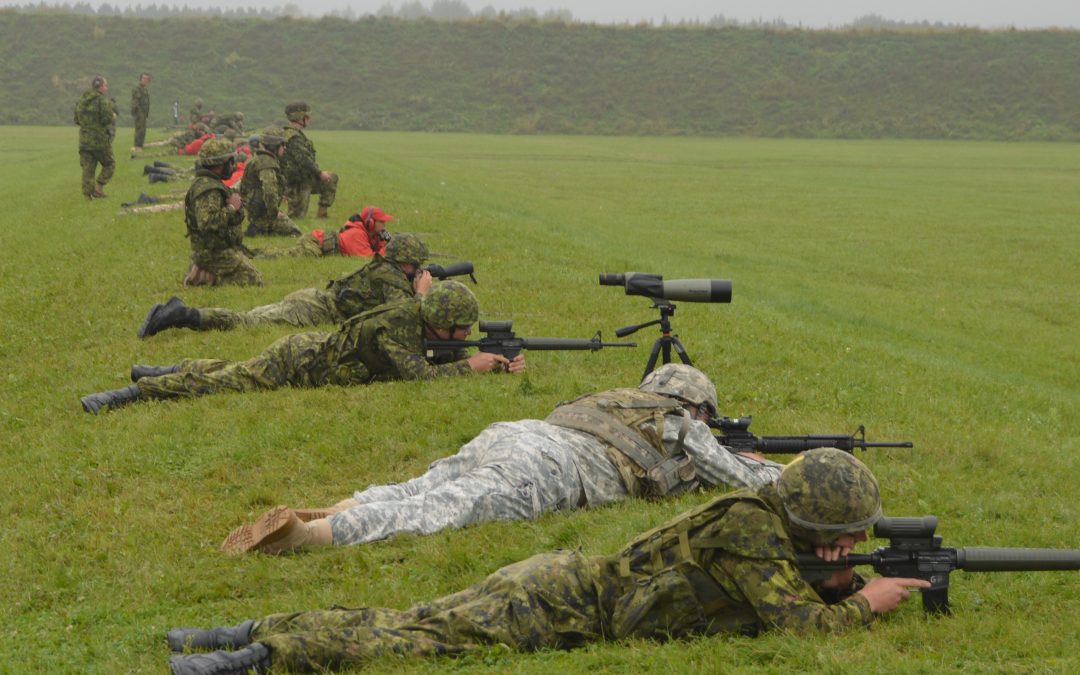 Small arms remain the sharp end of ground operations, especially in areas of closely-packed urban combat that have become the norm in many conflicts. So it’s fair to say that the more modern the weapon, the better. It’s a concept the Canadian Armed Forces (CAF) has been pushing for years as it set out to replace its general purpose machine guns (GPMGs) and pistols, as well as the rifles used by the Canadian Rangers.

The latter was the first of the three programs to bear fruit. Last year the government contracted with Colt Canada of Kitchener, Ont., to supply new C-19 variants of the Tikka T3 CTR (compact tactical rifle) designed by Sako in Finland. First deliveries to the Rangers of the replacements for their Lee-Enfield .303s – a design which first saw service with the Canadian Army in 1947 and was increasingly difficult to sustain – were imminent as Canadian Army Today went to print.

Then there’s the confirmation in July that the Army also would be procuring C6A1 GPMGs from Colt, the government’s official Strategic Source and Centre of Excellence for Small Arms, supporting everything from pistols to .50 calibre heavy machine guns. The first of what essentially are upgraded versions of the current C6 are supposed to enter service next September.

That leaves new pistols, still a concept rather than a program, meaning the first triggers won’t likely be pulled for some time. The Army currently uses 9mm Browning Hi-Powers, another decades-old design, mainly for personal protection, and it too is showing its age.

The Army’s ramrod on all three projects is Major Carl Gendron, who leads Director Land Requirements Crew Served Weapons and Snipers. He explained that the original Department of National Defence (DND) idea in 2007 involved “everything in the armoury: shotguns, machine guns, pistols and ancillary gear.”

By the time everything was costed, the potential bill was “somewhere” over $1 billion. “So it was decided by about 2009-2010, that the scope was so huge that it couldn’t be accomplished all in one,” setting the stage for the more phased weapons-specific projects approach.

Ultimately, 10 years has elapsed since it was recognized that the small arms equipment needed to be replaced and this program has struggled to gain traction in funding as it fights for priority within the queue. 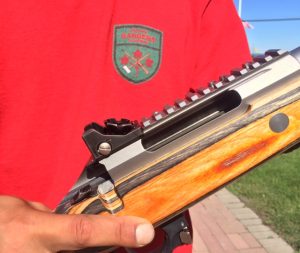 Effectively the CAF’s eyes and ears in remote areas, Rangers need what is essentially a hunting rifle for defence against big carnivores out to 300 metres in rugged coastal, central and northern regions. Temperatures can range down to -50°C; hence the C-19’s enlarged trigger guard and bolt handle to accommodate heavy gloves.

Like the heavier wooden-stock Lee-Enfield, the C-19 is a bolt-action rifle chambered for 7.62x51mm NATO rounds. It also takes civilian .308 Winchester rounds. It features a two-stage trigger with a three-position safety, protected front and rear iron sights, the latter adjustable for elevation with apertures calibrated for up to 500 metres in 100m increments. The receiver top has a slotted Picatinny rail for mounting other hardware. (The rail is named for the Picatinny Arsenal in New Jersey, a Department of Defense research and manufacturing centre.)

All this is mounted to a unique red extendable buttstock of plywood laminates – more robust and less susceptible to warping than solid-wood stocks – sporting the Ranger crest. The kits include hard and soft cases, cleaning gear, sling and trigger lock.

The only criticism – heard at the latest annual two-week Canadian Armed Forces Small Arms Concentration (CAFSAC) in Ottawa – was that they had a slightly heavier recoil than the Lee-Enfield. This was based on early field trials of 125 “prototypes.”

However, the nine Rangers at CAFSAC, held at the historic Connaught Ranges, were still waiting for their C-19s. But they acquitted themselves well with their Lee-Enfields at distances up to 500 metres against modern service rifles used by CAF Regular and Reserve troops as well as teams from the United States, United Kingdom and the Netherlands. 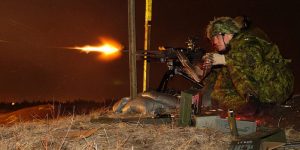 Troops familiar with the current C6, a domesticated variant of a weapon designed by Fabrique Nationale d’Herstal in Belgium, won’t have much of a learning curve with its replacement. The C6A1 also is a fully-automatic, air-cooled, gas- and spring-operated gun firing the same calibre as the Ranger rifle but belt-fed.

Asked whether the C6A1 might require additional training, Gendron said there could be some “minimal training” on the use of new scopes, which is generally done at “battle school” in the division training centres at bases in Gagetown, Valcartier, Petawawa and Edmonton. “Units also can run machine-gun courses.”

The initial $32.1-million contract with Colt is for 1,148 GPMGs delivered by 2019. The total buy of 4,774 is estimated in the Defence Acquisition Guide to cost at least $100 million. But the first batch includes non-recurring engineering and production line set-up costs, indicating that unit costs in the next batches will be lower. “We are now going (to National Defence) for funds for the second contract,” Gendron said. “That will take us all the way through to 2024.”

The project was conceived as an upgrade of the current weapons. That turned out to be impractical due to heavy use in combat missions such as Afghanistan. “It’s the most used weapon and there’s a lot of wear and tear,” Gendron said, citing fundamental issues such as popped rivets and metal-on-metal wear. “It’s not a matter of changing the barrel or other parts anymore.”

The C6A1s are based on the original design but include reintegration of the original adjustable gas regulator. “There’s only so much technology out there – nothing that’s better, really,” Gendron said.

The new gun has a polymer butt stock rather than a wooden one, an integrated NATO rail sight system, and a forward-accessory NATO rail around the gas cylinder. Accessories include a sling, spare barrel bag, cleaning kit, ammunition load carriage, and a basic logistics support package.

Although designed for ground support, the C6 can be pintle- or coaxially-mounted on a range of wheeled and tracked vehicles as well as CH-146 Griffon and CH-147F Chinook helicopters. Weighing 11.6kg, it has maximum and sustained rates of fire of 1,100 and 750 rounds per minute, respectively, and maximum and effective ranges of 3,275m and 900m, again respectively.

The first batch of C6A1s are FLEX models, carried by troops or mounted on vehicles. The remaining 3,626 will include 791 coaxial versions mounted to aim in the same direction as the main armaments on vehicles. This second contract also will include C6A1s for Special Operations Command.

GPMGs are distributed to all CAF units, including Reserves and the Royal Canadian Air Force. “We also keep some in depot to resupply when [they] get broken or require overhaul,” Gendron explained. Infantry platoons are assigned one GPMG operated by a crew of two, one firing and the other feeding ammunition belts. The rest of a platoon is armed with assault rifles, light machine guns and an anti-tank weapon.

As unveiled by Defence Minister Harjit Sajjan in June, the new Strong, Secure, Engaged policy framework doesn’t specifically mention pistols in outlining priorities for the next two decades, but they fall within the “weapons” category in the document’s Army element.

There’s no gainsaying their value in urban close-quarters, an environment Canadian and allied troops increasingly find themselves. Semi-automatic and recoil-operated, Hi-Powers feature a magazine safety, an applied safety catch, and fire 9×19-mm ammunition. They weigh 1.1kg and have a muzzle velocity of 35m/sec. Their maximum range is 50m, but they are generally effective at half that distance.

Replacement has been the goal for years but other priorities have repeatedly pushed back the timeline. Even if it was green-lighted today, the Army wouldn’t have a full inventory in place for nearly another decade.

Industry was told last year that the requirement is between 15,000 and 25,000 pistols, with a selection of grips to fit different hand sizes as well as spare parts and related gear, at a cost of up to about $50 million. “If I had to write a Statement of Operational Requirement right now, we would go towards a 9mm pistol…in the same category as the current 320,” Gendron said.

He was talking about the Sig Sauer P320, the U.S. Army’s handgun of choice, but agreed there is “lots of choice.” The fundamental requirement is that it be NATO 9mm, which limits Canada’s options. “An interim buy of a smaller number” in the short term is possible to get new pistols into the field sooner rather than later for “a widespread test” in real-world conditions.

“If we wanted a quick hit, we could get a few million and that would buy a few thousand pistols,” Gendron said. “But we need 16,000 for the Canadian Forces! A wholesale buy would be a different matter, requiring all the paperwork that would entail, Canadian production, etc.” The preference, however, seems to be a “whole fleet” replacement; he agreed “it would make more sense to come up with all of the money and get this done right the first time.”

The delay is partly due to the Army having had so many Hi-Powers that it has been able to keep them serviceable. But wear and tear, accelerated by the mission in Afghanistan, has whittled them down; more than 1,200 are being disassembled for spares to keep others in service until a new pistol is available.

The prospect of increased commonality underpins the government’s sole-source ammunition agreements with the only remaining players in the market: Colt Canada and General Dynamics Ordnance and Tactical Systems-Canada.

DND prefers to have a 10-year depot inventory but sometimes finds itself with a 20-year supply. Older ammunition is regularly sampled and tested for visible corrosion and chemical composition, but “it’s usually first-in/first-out,” said Gendron. “We’ve found some sealed from the 1950s but it still cycled properly. We don’t want to go there, of course, but I would say that 20 years is probably what we should be looking for as a maximum.”

He also said it helps in some theatres to be able to get ammunition from allies. “That’s the whole idea of NATO interoperability, leveraging our partners’ equipment – ammunition, not so much the weapons.”

A long-standing member of the Parliamentary Press Gallery, Ken Pole covers the broad spectrum of defence and aviation issues.