Signalers – the first to arrive, the last to leave 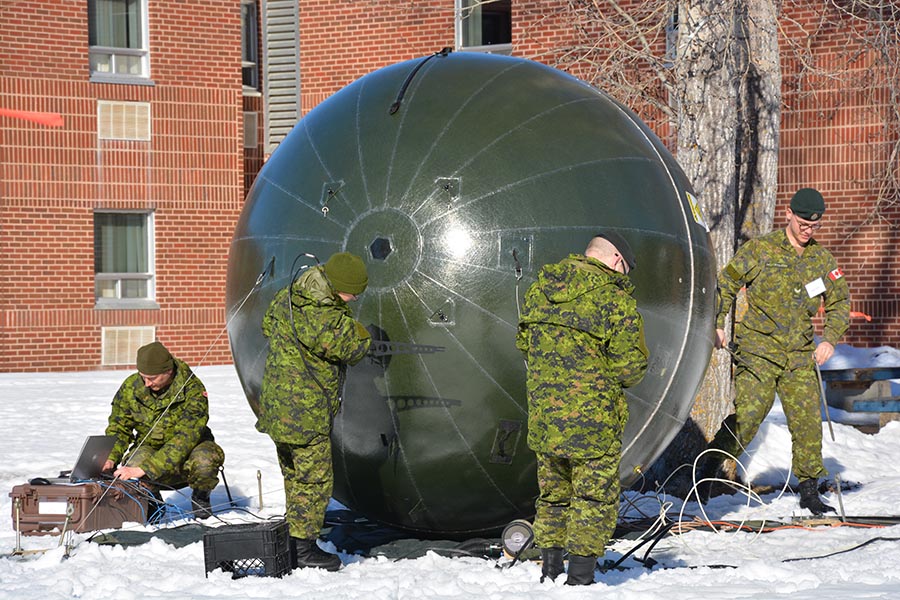 Thunder Bay, Ontario — Most people never leave home without their phone. Without it, you can’t find where you’re going, text your friends, order a pizza or call home. The cellphone is a vital piece of communications equipment that relies on expensive and complex systems to make it work. Without the cellphone many people would struggle to go about their daily lives.

Captain Paul Docimo is with 3 Squadron, 38 Canadian Brigade Group Signal Regiment.
he Canadian Armed Forces (CAF) is no different than an average person. The CAF needs a way to navigate, speak to thousands of people, order vital supplies and even, on some occasions, call home. In many cases when the CAF deploys, it does not have the luxury of using cell phones. Instead it relies on Signallers from various Signal Units across Canada.

For 38 Canadian Brigade Group (CBG), the communications provider is 38 Signal Regiment (38 Sig Regt). A Canadian Army Reserve unit, 38 Sig Regt consists of over 100 soldiers who are either part- or full-time Reservists, or Regular Force members. It has its headquarters in Winnipeg, Manitoba with four squadrons spread across 38 CBG’s area of operations between Saskatchewan and Northwestern Ontario.

Recently formed in 2012 out of several smaller formations, 38 Sig Regt has proven that it is ready for any task that 38 CBG assigns. It is the only unit within 38 CBG that can provide a communications link around the world for CAF operations.

Collectively, its members have vast experience both in the military and the civilian worlds, having served overseas on operations, such as in Afghanistan, on Peace Keeping missions, and most recently the training mission in Poland, Operation REASSURANCE. At home, 38 Sig Regt soldiers have provided support to domestic operations such as forest fires in 2015 and flooding in 2011. In their civilian lives, many Reservists have full-time jobs, bringing their skills of technology, leadership, maintenance and education to the military.

The 38 Sig Regt is always busy, usually the first to be in the field and the last to leave. Other CAF units, such as the Infantry, depend on the communication systems that signallers provide. As a signaller, you rarely have downtime. Expected to be a soldier first, all signallers must maintain their physical fitness and soldier skills before practicing their trade in communications and electronics. With hundreds of pieces of kit to manage, such as vehicles, trailers, generators, radios and camping stores, any downtime is spent conducting maintenance.

The Regiment is also looking into the future. Within the next two years, it should be able to deploy a new system called Land Command Systems Suite (LCSS). This system of computers, routers, satellite dishes and servers will give 38 Sig Regt the ability to deploy computer networks into the field.

When members of 38 Sig Regt are not training, you will normally find them involved in various activities run by 38 CBG. This year, Signallers provided a complex communications system using satellite and long-range radios during Exercises ARCTIC BISON, BISON WARRIOR, and GOLDEN COYOTE.

Member of 38 Sig Regt also serve their communities in a variety of ways. Every year the Regiment runs Operation RADIO SANTA, a community relations event that provides a radio communications link between school children and the North Pole.