Shedding the weight: Project aims to lighten the load with updated soldier clothing and equipment 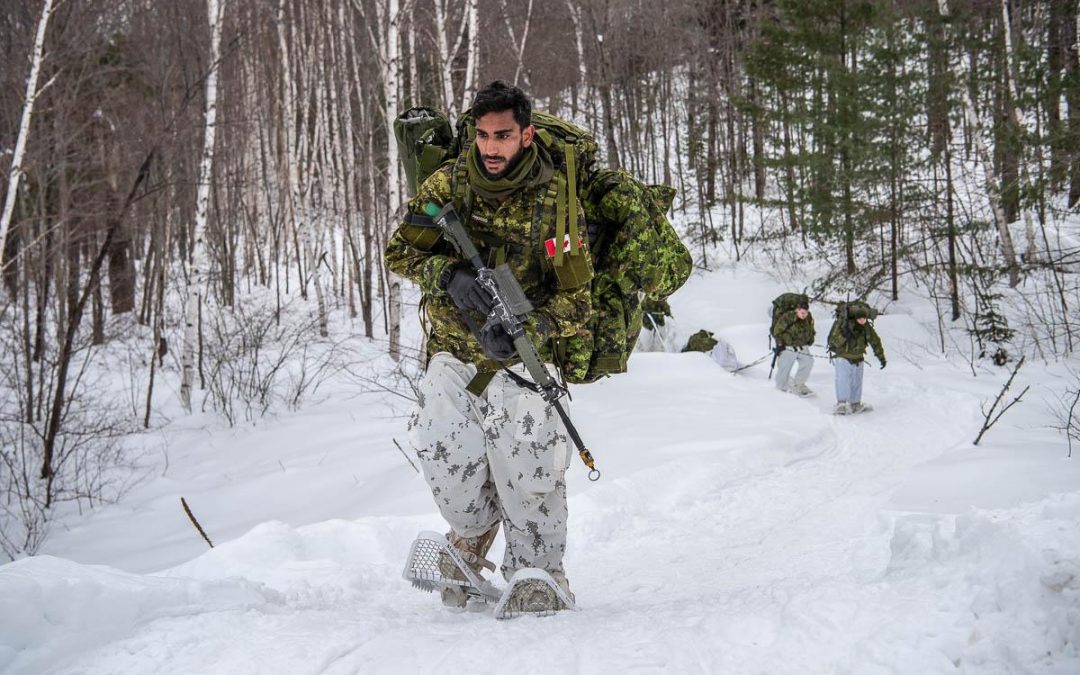 The first layer of protection between Canadian soldiers and a hostile world is operational clothing, and some of that wardrobe needs updating.

“Some pieces of equipment, not all of them, need to be upgraded or modernized,” said Lieutenant-Colonel Ray Corby, who leads the Army’s Soldier Operational Clothing and Equipment Modernization (SOCEM), a wide-ranging project to look at every aspect of soldiers’ equipment and make sure it meets current and future needs.

“We only have so much capacity in the system to push individual projects through. But at the same time, we know all of our equipment has to be integrated,” he said.

To manage the complexity and get everybody on the same page, Corby convened a day-long “summit meeting” in late February. The group consisted of Corby’s Director of Land Requirements equipment project managers, DND civilian staff working for the Assistant Deputy Minister (Materiel), and scientific personnel from Defence Research and Development Canada (DRDC).

“We locked ourselves in a room for a whole day, with all of the existing equipment and some of the equipment we think is going in the direction we want to go. ADM (Mat)’s role was to advise the group on priority items because of decreasing stocks that need replacement, while the Army put forward the changes we want to see reflected, and DRDC informed us what is within the realm of possibility to do right now.”

Defence researchers have been pioneering impressive research, especially on important areas like body armour, “so we want to ensure we are capturing all that,” he said.

The Army commander, Lieutenant-General Jean-Marc Lanthier, has established some standards for new and existing equipment. As Corby said, the commander understands that, as the Army modernizes, there are going to be mixed fleets, because it can’t do everything at once, but the new fleet must integrate with existing kit.

Load carriage is high on the SOCEM priority list. “I think that the commander and the Army Sergeant Major hear a lot about load carriage because that is what our soldiers are always wearing, so it is something they want to ensure is the best,” said Corby.

A load carriage system could mean a modular fighting rig, similar to the current tactical vest, as well as rucksacks and small packs.

“Part of the day-long exercise was building the future soldier’s kit right there. We had mannequins in the room so we could hold up pieces of kit, ask whose project is impacted by this, and get a discussion leading to answers right away. By the end, we had a pretty clear road map to where we want to go,” he said. 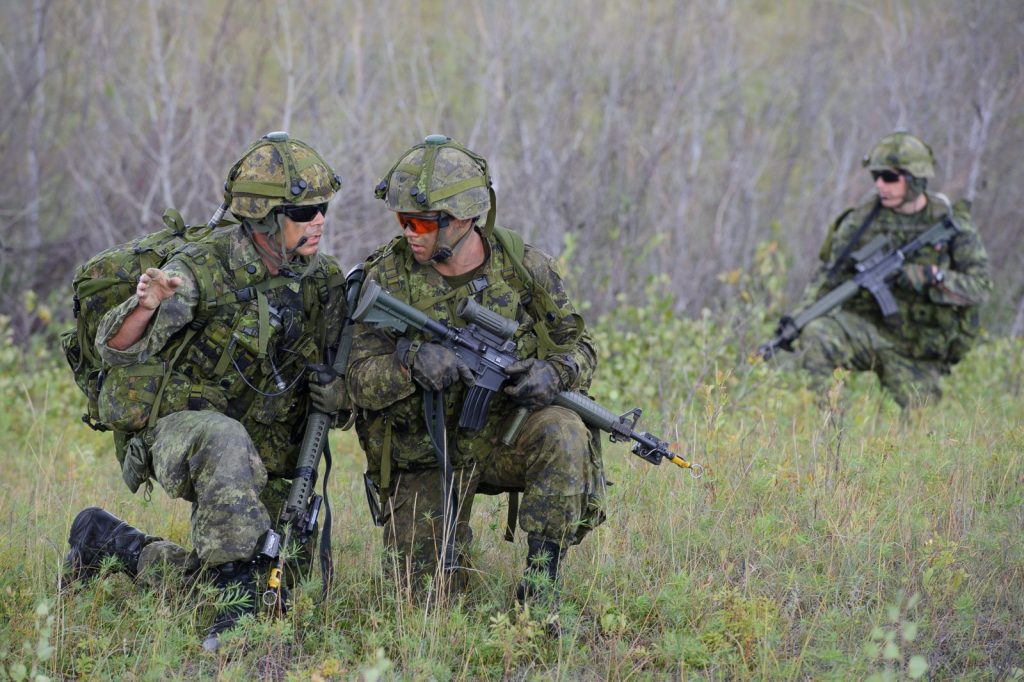 Managing dependencies was a challenging component, making sure a change in one piece of equipment did not bring unwanted consequences elsewhere. For example, items like night vision and the Integrated Soldier System Suite (ISS-S) not only have obvious impacts on total load carriage weight, they must also attach easily to new and existing equipment.

Lanthier has also made injury reduction in soldiers a key priority, and reducing the load they carry is a major factor. In addition to reducing the weight of each individual item the soldier carries as much as possible, a new design philosophy could give leaders down the chain of command choices in tailoring equipment to each mission. During his second deployment in Afghanistan, mentoring Afghan army units, Corby said his Canadians weighed themselves and found they were each carrying 100 pounds of kit. DRDC research showed that at least some of that weight could have been reduced. For example, soldiers went out carrying ten magazines of rifle ammunition, but, in fact, nobody ever ran out.

“As I try to identify requirements, that tells me that not every mission is the same. We need to enable commanders and authorize them to make decisions based on the situation on the ground, whereby the soldier who is dressed for one situation is not necessarily going to be dressed that way in another situation,” he said.

Clearly, that will have a big impact on modular equipment like ballistic protection. “Can pieces come off in certain circumstances? DRDC has helped us out with some research there, bringing all of that together so we are not missing anything,” Corby explained. “Ideally, I would like to provide new equipment to soldiers and their commanders [that offers them] the ability to decide what is the right scale to wear at that particular time, based on the situation they have assessed.”

Corby pointed out that many times, detection and action against an opposing force is initiated not by whatever camouflage pattern they are wearing, but simply by detecting their movement.

“You are more likely to be compromised by movement than you are by what you’re wearing, provided you are in a combat uniform. If you are more agile, and you can move quicker, your chances of survival in combat increase,” he said. “That brings us back to removing some of the burden from soldiers to give them speed and agility. So, when you lighten the soldier’s load, you reduce their injuries and you increase their survivability. If you have a method to lighten the load, they are likely to move in a more tactical fashion.”

The distinctive CADPAT camouflage pattern could see some changes this year, based on SOCEM’s work. The new design would most likely be a mid-point between the current ‘forest’ and ‘desert’ colour combination. Fall 2019 could see some soldiers in the new pattern of camouflage.

“The potential change of camouflage pattern is just one part of integrating soldiers’ equipment,” Corby explained. “If we change the pattern, most of our equipment, our tactical vests, our small packs, our rucksacks, our helmet covers are all in our current pattern, so do we change all of our equipment and does our new equipment reflect this pattern?”

Interestingly, many militaries around the world have decided that camouflage is not necessary for every mission, so they have chosen to use a ‘coyote brown’ type colour. “It’s a fairly generic, basic colour that is more versatile in many different environments. Do you need a soldier that is completely in CADPAT all the time? Well, not necessarily. You look at our soldiers, some of them serving overseas, they are already wearing equipment in brown.”

Lanthier has made it clear he does not want Canadian soldiers going overseas with unproven equipment. Ideally, Corby said, he would soon like to take at least 800 soldiers from every part of the Army into the field, to test the new equipment in situations as real as he can make them.

“I am an infantry officer, but I don’t want equipment that is only going to be good for the infantry soldier. There is all the combat arms, the armoured troops, engineers, artillery, and then all of our support personnel. There are even some Air Force and some Navy special requirements to be developed and tested.” 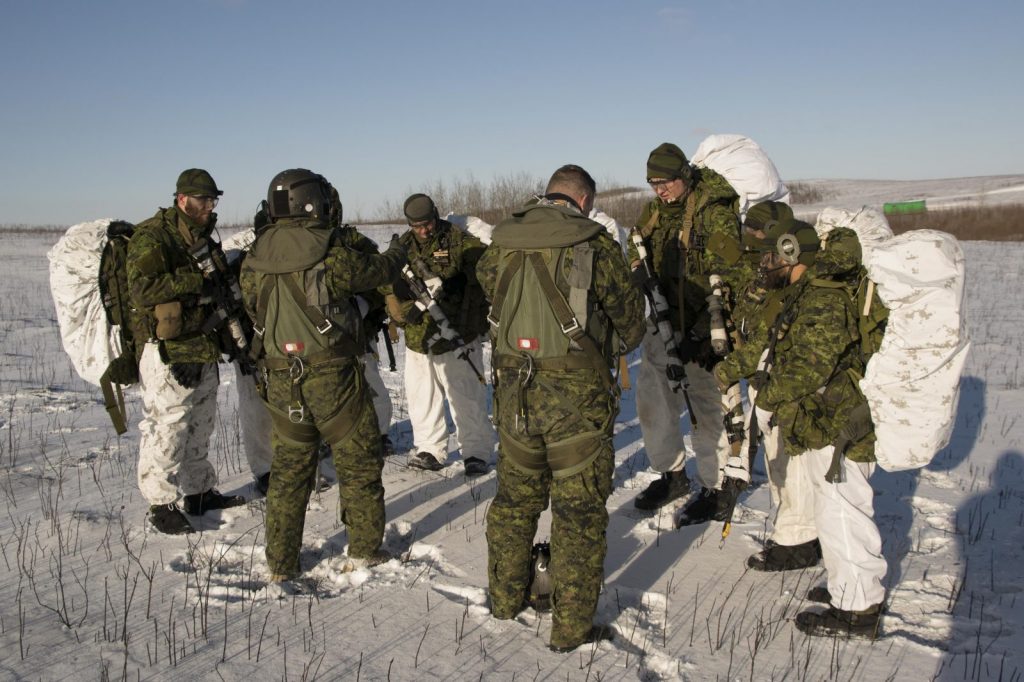 Army Reserve members from 32 Canadian Brigade Group embark on their patrol for the Canadian Patrol Concentration in the Wainwright training area on November 16, 2018. Photo: DND

Function, fit, form
Fabric selection is a large art of designing a new generation of uniform, but there would have to be a marked improvement for the Army to go through the effort of changing the uniform cut and form. A gender-based analysis has already ensured that the Army can accommodate a variety of sizes and shapes.

“We need to see what is offered out there in industry, in textiles that would improve on what we currently use,” said LCol Ray Corby, project director for Soldier Operational Clothing and Equipment Modernization. “We have the pattern, cut and form of the uniform… Are we good with the current textile or are there advances out there we need to look at?”

In fact, the textile industry has been working hard to meet that requirement. Logistik Unicorp is a familiar name to Canadian Armed Forces (CAF) members and, behind the scenes, they do a lot more than take orders and deliver clothing. As Claudia Leblanc, the company’s marketing director, notes, a new generation of textiles brings benefits like weight reduction, increased mechanical properties, and advanced moisture management.

In recent years, Icebreaker Clothing has become a major name in civilian outdoor wear because its natural Merino fibre offers some unique properties. As Catherine McCourt, the company’s North America corporate sales manager, explained, “Merino provides body temperature regulation, it provides a high UPF [ultraviolet protection factor] rating against the sun, and it also has self-extinguishing properties, so it is considered fire-resistant.”

Soldiers spending days at a time in the field can appreciate the fact that it is naturally anti-bacterial, so it does not retain odours. Although not yet an official supplier to the CAF, Icebreaker has already won competitions to provide clothing for units that need items specifically for cold weather training or where the job requires nonflammable materials.

“The fact that we have been able to work our way through other groups outside the military, like search and rescue and emergency management, has helped us with other government work,” said McCourt.

While Icebreaker builds on the special fibre of the Merino sheep, other companies are doing research into high-tech textiles. Logistik, for example, is creating a fireproof yarn for the next generation of fire-resistant underwear, and is studying new fabrics from innovative fibres like Canadian hemp.

Farther into the future, and beyond the Canadian Army’s requirement for equipment that can go into the field now, ‘smart’ fabrics hold the promise of intriguing solutions such as medical condition monitoring, embedded communication and data systems right in the fabric, and even adjustable camouflage configurations.