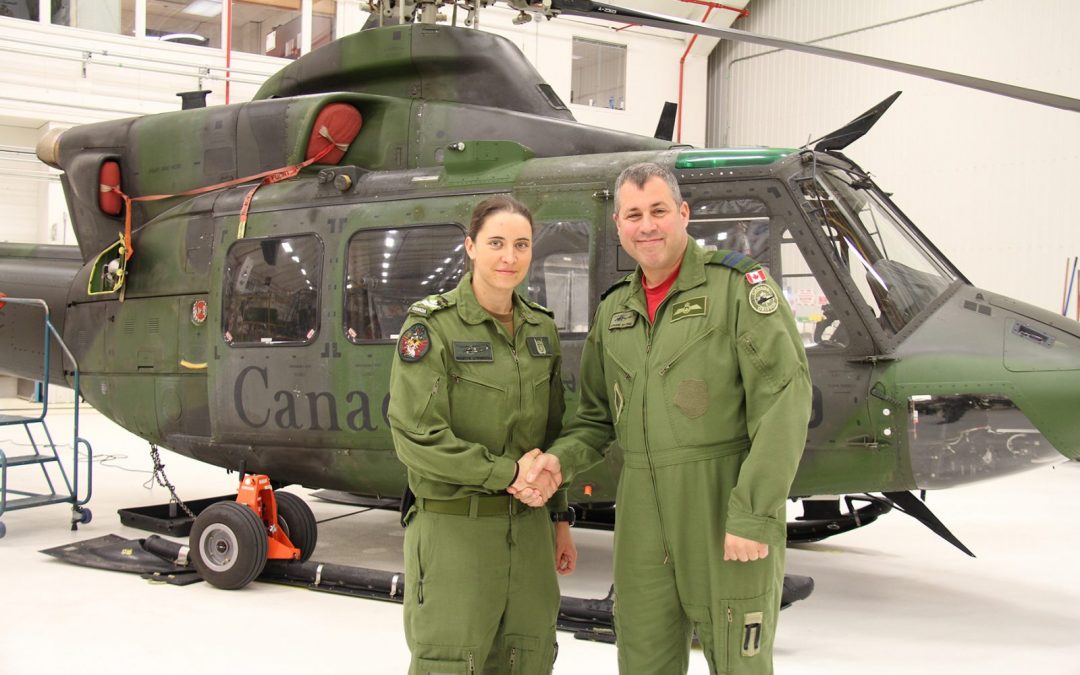 Master Corporal Brigitte O’Driscoll, a reservist with 438 Tactical Helicopter Squadron, based in Saint-Hubert, Quebec, and the Royal Montreal Regiment (RMR), a Canadian Army Reserve unit in Montreal, Quebec, received her door gunner badge from Tactical Aviation on May 10, 2019.

As of January 2019, door gunners from the Canadian Army who support Royal Canadian Air Force tactical aviation operations and possess specific qualifications are entitled their own specialist flight crew badge.

Originally from Lachine, Que., O’Driscoll enlisted as an infantryman with the RMR in 2012, fulfilling her wish to take on new responsibilities and be active. The young woman loves to outdo herself, so when the opportunity to become a door gunner came up, she seized it without a moment’s hesitation.

O’Driscoll loves her new work environment, the CH-146 Griffon helicopter. “Even though we’re part of the Army, we want to fly in aircraft. Everyone wants to have this kind of experience, and I have this opportunity,” the soldier said.

When she isn’t flying on board a helicopter, O’Driscoll is a firefighter in Hudson, a suburb of Montreal, where she plays football with the Montreal Blitz, which reached the World Championships in 2017. She definitely doesn’t like to stay idle! In her civilian and military life, O’Driscoll constantly opens and breaks down doors, both literally and figuratively.

She will have a busy year becoming more proficient in her door gunner training. She is very enthusiastic about the idea of attending tactical aviation basic training, which is given by both the Royal Canadian Air Force and the Canadian Army, and will take place in the fall at Canadian Forces Base Petawawa, Ont..

“I’d very much like to take part in a mission abroad,” said O’Driscoll. “It’s something I want to experience. It would enable me to apply all the knowledge I’ve acquired in my training to a real situation.”

She encourages everyone who wants to follow in her footsteps to persevere, work hard, and go for it.

Tactical Aviation door gunners are members of the combat arms trades of the Canadian Army and are attached to a squadron of the Royal Canadian Air Force. They receive their badge after completing the selection process and door gunner training.