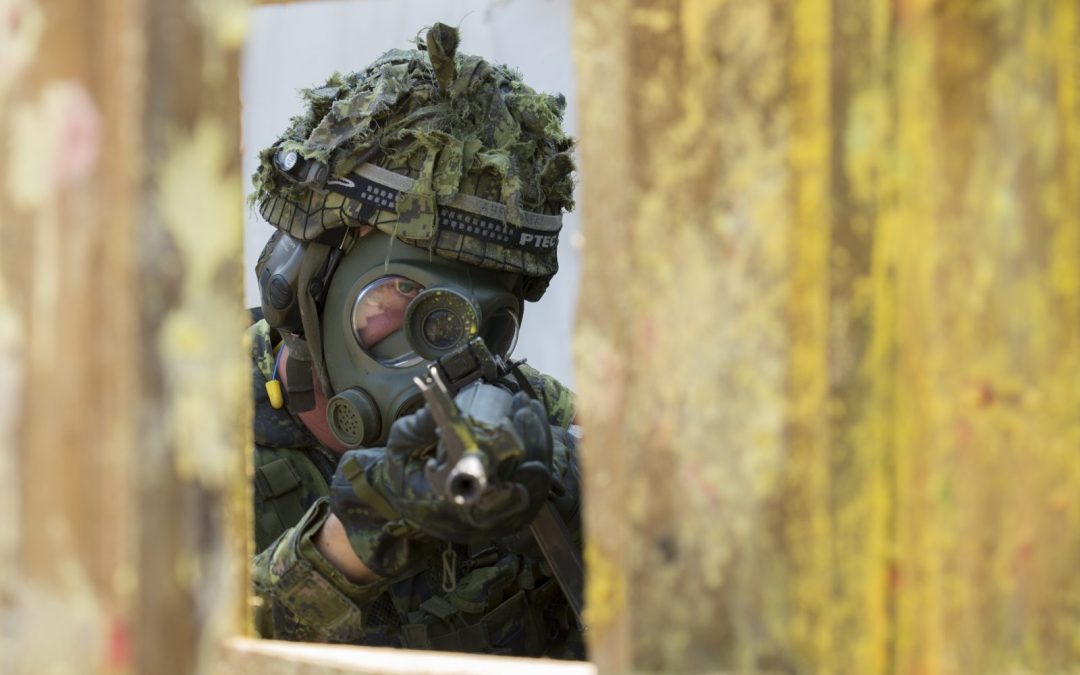 There’s something fundamentally unsettling about a robotic weapons system that can track you silently and relentlessly with its cameras, computers and servo motors – even if it only fires paintballs and the only damage is to your ego.

That was the scene when Canadian Army Today had a walk-through of what could become a key element in training Canadian soldiers, guided by military personnel and Tode Petrovski, a Swedish aircraft engineer who is carving out a niche for himself in industrial automation and autonomous systems.

With live fire cracking in the background last fall at the Canadian Armed Forces Small Arms Concentration (CAFSAC) at the Connaught Ranges and Primary Training Centre just west of Ottawa, Petrovski explained how he had just finished demonstrating a couple of his Defender Sentry Units (DSUs) in a simulated urban environment.

This was after Army personnel had run the robo-gauntlet competitively in full gear, including gas masks, shooting simunitions to disable the machine before it nailed them. Some got through unscathed but others quite visibly didn’t in what Petrovski understood to be the first exercise of its kind by any military force.

Lieutenant-Colonel Mark Popov, the event director for CAFSAC, said in a briefing before the walk-through, that the simulated environment, known as a dynamic range, is built from scratch every year by junior ranks so that nobody who competes will know the layout going in.

“They need to be able to think, move, communicate, shoot, make decisions under stressful circumstances,” he said. “They’ve got the clock working against them, all the equipment they’re wearing…. All of a sudden, they’re in an enclosed space, faced with multiple decisions. You might think that running through a maze with a pistol in your hand has no applications on the outside. I would beg to differ.” 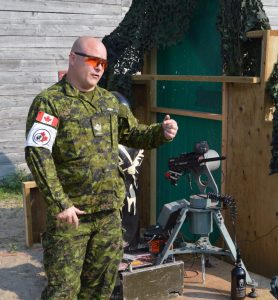 He explained that it helps to hone soldiers’ ability to respond appropriately to whatever situations in which they find themselves. “We really rely on every member of the Forces to be able to lead and to make decisions under pressure; this is just one facet of the training that we do. In a worst-case scenario, if we have to fight our country’s wars somewhere or work to protect others at home or abroad in a violent setting, this is the acid test.”

Manufactured by Shaank, headquartered in the coastal city of Mölndal, the Defender Sentry Unit can be programmed to fire rapidly on one or several opponents. In the latter case, it targets each for three seconds before repeating the cycle.

Petrovski, the company’s managing director, said “the whole point is to offer the soldier interactive” rather than essentially static targets with limited movement. “The idea was to give them the opportunity to learn about themselves when they’re under fire, how they react…. It’s always when an adrenaline rush comes in that the primal animal can go ‘fight or flight’.”

The two tripod-mounted DSUs were bare-bones Mark 1 models which the Army modified to meet its specific needs. Modular and self-contained, they automatically detect, track and engage any targets they are programmed to see. And that’s with a relatively simple computer.

Shaank also manufactures three others, each more sophisticated than the other, capable of presenting increasingly serious levels of threat. The units can be used as a standalone target replacement or integrated with standard falling targets. Their modularity means they can be scaled to the needs of the range operators and the combat scenario.

Gesturing at some of the nearby soldiers who were painted by the DSU during 13 days of competition, Petrovski said, “the machine just cut them down because it was working under the parameter that was given to it…. You cannot scare it, you cannot stop it until it is destroyed.

“This is just the first step and I’m very glad that the Canadian Army took a really bold step to show and use the system. The [Army] will be the spearhead in the new training and development of the soldier of the future.”

By using the DSU and supporting analysis, the Army could evaluate soldiers’ reaction times, speed, agility and precision. “We can train them to be much more efficient,” said Petrovski.

That being said, it’s a possible future not everyone is happy to contemplate. While conceived as a training tool, the DSU does beg the question of how far this kind of technology can be taken. Skynet, anyone? The Terminator? Those are concepts Petrovski hasn’t lost sight of. 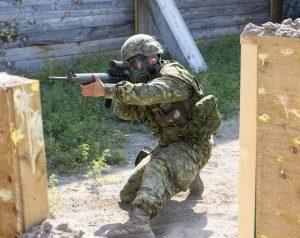 “A lot of countries and big powers are working on artificial intelligence (AI) systems that will be implemented in the future,” he said, speculating that autonomous weapons systems could be fielded in as little as 10 years.

There was a concerted push four years ago to have Canada lead an international effort to outlaw autonomous weapons systems, known as the Campaign to Stop Killer Robots. Once the weaponization genie is out of the bottle, it is much harder to put it back, went the argument.

The cork is still being designed by an international group of governmental experts on lethal autonomous weapons systems (LAWS) from parties to the UN Convention on Certain Conventional Weapons. Meanwhile, more than 200 Canadian AI experts signed an open letter to Prime Minister Justin Trudeau, urging Canadian leadership on LAWS. Their letter flowed, in part, from the government’s announcement in last year’s budget to invest $125 million in a pan-Canadian AI strategy.

“Lethal autonomous weapons systems that remove meaningful human control from determining the legitimacy of targets and deploying lethal force sit on the wrong side of a clear moral line,” they wrote. “Autonomous weapon systems threaten to become the third revolution in warfare.”

That particular genie may already be out of the bottle, Petrovski suggested. “Unfortunately, much bigger players than myself or the Canadian Army are working on this. The time is now – or maybe yesterday – to have these systems in every training centre. Artificial intelligence and killing machines will be tested and implemented….and if they’re already on their way, we have to learn how to beat [them].”