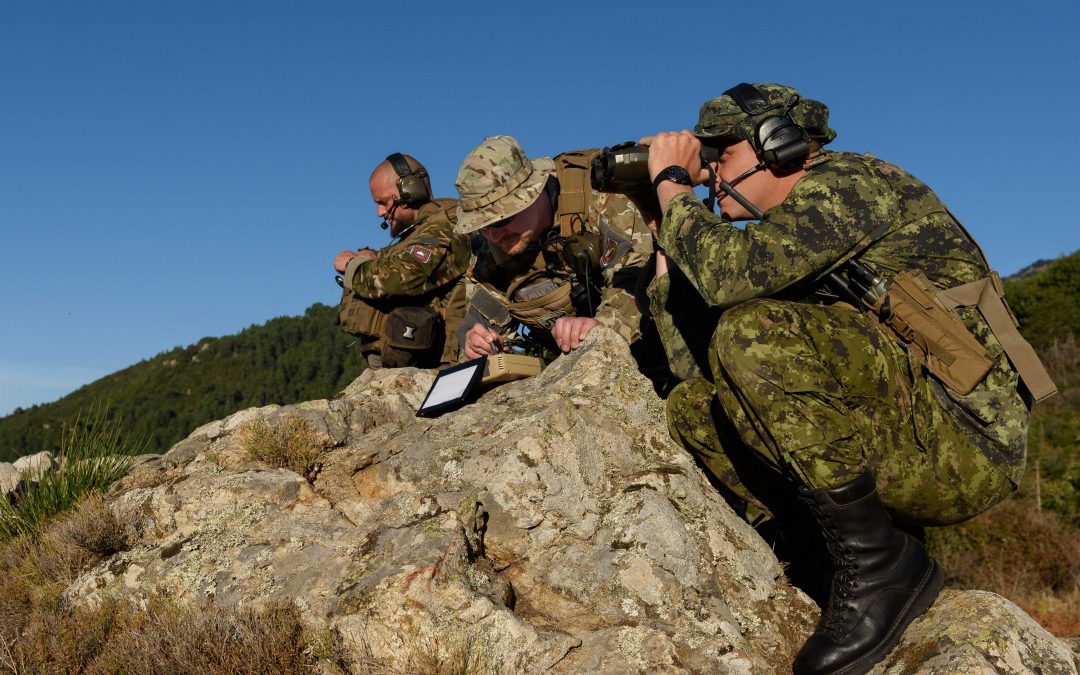 “We will be the belle of the ball. This is the most advanced dismounted system out there,” said Major Jason Vaughan. “There will be a lot of people interested in trying the system if it goes as smooth as we hope.”

Bold Quest will serve as the user acceptance test for the DACAS system, a critical piece in a much larger Army project to modernize the equipment, connectivity and training of forward observation officers (FOOs) and forward air controllers (FACs), the soldiers who, respectively, call in artillery and aircraft munition strikes as part of joint fires.

While that might not seem like the fanciest dress to bring to the ball, the relatively simple system delivers exceptional dynamic level targeting, said Vaughan, the project director of both the DACAS minor capital project and the larger FOO/FAC modernization program.

A forward air controller in Afghanistan, Vaughan learned all too well the need for digital interoperability with allied aircraft. Calling in fire support has always been fraught with difficulty. Combat engagements during operations often involve indirect and joint fires from manned and unmanned aircraft, but fatigue and the stress of operating under fire have too often resulted in errors that led to fratricide or civilian casualties.

“When you have been up for three days, you’re tired and you are trying to verbally send up five ten-figure grids, that’s 50 different numbers that you are trying to spiel to a pilot who is also trying to stay alert after his 20-hour shift,” he observed. “If you make an error in a number, a 6 instead of 9, that bomb doesn’t go where it’s supposed to go.” 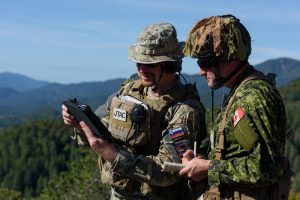 An advancement on Rockwell Collins’ Firestorm, a Windows-based integrated targeting system for joint terminal attack controllers (JTACs, the U.S. name for FACs), DACAS is expected to reduce and simplify the steps involved in targeting. Firestorm is operated by 13 countries, but Canada will be the first to field the upgraded Android-based system, which uses open-source military Android Tactical Assault Kit (ATAK), a smartphone geo-spatial mapping engine that is “more capable, power-efficient, and lightweight than any DACAS system we have fielded to date,” according to a briefing prepared for the Army Capability Development Board.

Charlie Heidal, Rockwell Collins’ manager for joint fires and effects and a former JTAC, called the move to an interoperable Android system a paradigm shift for both ground controllers and pilots.

“There are going to be a lot of people looking over Canadian shoulders at Bold Quest,” he said “With a digital system, I can tap, transmit, and it is in your cockpit. You take your targeting pod and tie it to that target. The targeting pod sends me a line and a vector that essentially says, ‘here’s the plane, here’s the line, here’s the target.’ That’s my first validation. The second is, I can see your video, [and] I can direct you left, right [onto the exact target].”

What used to take 15 to 20 minutes to talk a pilot onto a specific target can now be accomplished with a few clicks, said Vaughan, and both the FAC and pilot have higher assurance they are looking at the same target.

With the grid reference from the laser range finder, “I can transmit the nine-line with two clicks on the new software, the plane snaps its pod to it and now, instead of having to talk him onto the target, he sees exactly what we are looking at.”

DACAS resolves the inherent inaccuracies of the digital magnetic compass in a laser range finder (LRF). Over time, as a laser range finder interacts with metal vehicles, for example, the compass can be off by dozens of meters when a target is more than 1,000 meters away. With the ATAK and precision fires image software, a controller can immediately see the difference between the actual target and where the LRF indicated, and correct by dragging the cursor over the target before transmitting the grid to the pilot.

“The software takes the anomalies out of the location of the target,” Vaughan said. “The peripheral tools like LRF are great, and they are getting smaller and better, but this removes human error.”

Digital interoperability with an aircraft not only means easier transmission of multiple targets, it also allows aircraft to stand off at a greater distance when coalition forces do not have air superiority, engaging only once they have received and confirmed the target package.

And it allows for more use of precision munitions, both Heidal and Vaughan noted. Individual targets can be tagged and followed to a location that minimizes collateral damage, and more precise target data allows for the use of smaller diameter bombs.

“When we were doing it 10 years ago, to get an individual tango, we were dropping in weapons of high yield and blowing up a lot of stuff,” said Heidal. “It’s not efficient, effective, or good in the news.”

While all data between DACAS and aircraft is encrypted, GPS jamming remains a concern. Vaughan said the Army would seek to acquire, through a second minor capital project, an anti-directional jamming solution similar to GAJT (GPS Anti-Jam Technology), a LAV-mounted technology from Calgary-based NovAtel that was tested by artillery gunners under a Build-in-Canada Innovation Program contract in the fall of 2016. The challenge now, he said, “is to mount that on the individual soldier.”

DELIVERED BY THE DEADLINE

DACAS addresses several priorities for the Chief of the Defence Staff, including targeting and interoperability across the Canadian Armed Forces. Air force tactical air control party (TACP) teams and special operations forces (SOF) will receive DACAS suites. And the project will be compatible with the planned roadmap for the CF-188 Hornets as they upgrade communications protocols. The system will also serve as the digital backbone for any future software development to fire precision guided munitions from a seaborne platform.

More importantly, though, it helps meet an immediate obligation to be digitally interoperable with the United States and key allies. As a signatory to the DACAS Memorandum of Understanding, an initiative led by a U.S. joint fire committee overseeing JTAC training regulations and operational requirements, Canada agreed to ensure all FACs working with American aircraft were DACAS-capable and trained by the end of 2018. 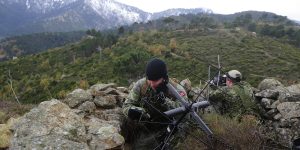 DACAS is also the first step to upgrade the systems and training for forward observers and air controllers, a potentially wide-reaching project that has yet to be officially funded. The lightweight DACAS system – less than two and a half kilograms – cracks the toughest nut, connecting the dismounted soldier to fighter and bomber aircraft, whether via Link 16 or VMF (variable message format). But the project also intends to bring vehicles, artillery, intelligence centers and operational headquarters into a broader network that can push and pull targeting information as required.

Some of that may be accomplished by other projects such as Airspace Coordination Centre Modernization (ASCCM) and the Long Range Surveillance System (LRSS) variant of the Light Armoured Vehicle (LAV), which will eventually replace the Army’s Coyote reconnaissance and surveillance platform. But the FOO/FAC Modernization project team will have to ensure their requirements are incorporated to avoid the inevitable stovepipes.

To better protect FOOs and FACs working from a LAV, for example, the special variant enhancement will examine an independent target viewer on the turret and a modernized target observer fire control system. “When you are in combat, you sometimes make yourself very vulnerable. You often have to pop the hatch and position the vehicle to allow the FAC to see the target – you are broadsiding your vehicle to the enemy,” Vaughan explained.

While some solutions will require hardware, others can be software fixes. Since FOO/FAC modernization is intended “to make sure we can talk to our guns, why not make an app for fire?” Vaughan suggested. “Swipe left for guns, swipe right for close air support.”

The final piece to the modernization project will be an upgraded training system, something Vaughan wants to ensure is appropriately funded and integrated into the overall project, not a bolt-on at the end. With fewer opportunities for live training, the importance of immersive simulation will be critical to keeping FOOs and FACs combat-ready.

He noted the availability of 280- or 360-degree domes, with the temperatures, smells and overhead conditions of a live exercise, that can now deliver a realistic experience in training centres and at Reserve units. “You can use the exact equipment you use in the battlefield, and it doesn’t even have to be a dome – we can do much of this with something like [Amazon’s] Oculus Rift [virtual reality headset],” Vaughan observed.

Rockwell Collins will deliver 100 DACAS systems this fall in advance of acceptance trials at Bold Quest. The company will also provide training courseware and simulation software along with five years of in-service support for the entire system.

Despite the small quantity of the contract, LCol Robert Dunn of the directorate of Land Requirements said the complex project pushed industry “outside of their comfort zone” to deliver “a Cadillac product” that will transform how the Canadian Army communicates with targeting and joint strike platforms.

“The project will ensure that we have digital interoperability with allied targeting platforms by providing a tactical toolbox of equipment that will allow the FAC the flexibility to operate in any environment,” he said.

However, it is just a tool, Vaughan cautioned, that will never replace the mathematical computations and basic skills of a FOO and a FAC. “If it doesn’t work, you pick up your laser range finder and start talking the pilot onto the target. [FOOs and FACs] will never get to play with this until they are capable of doing all the math.”