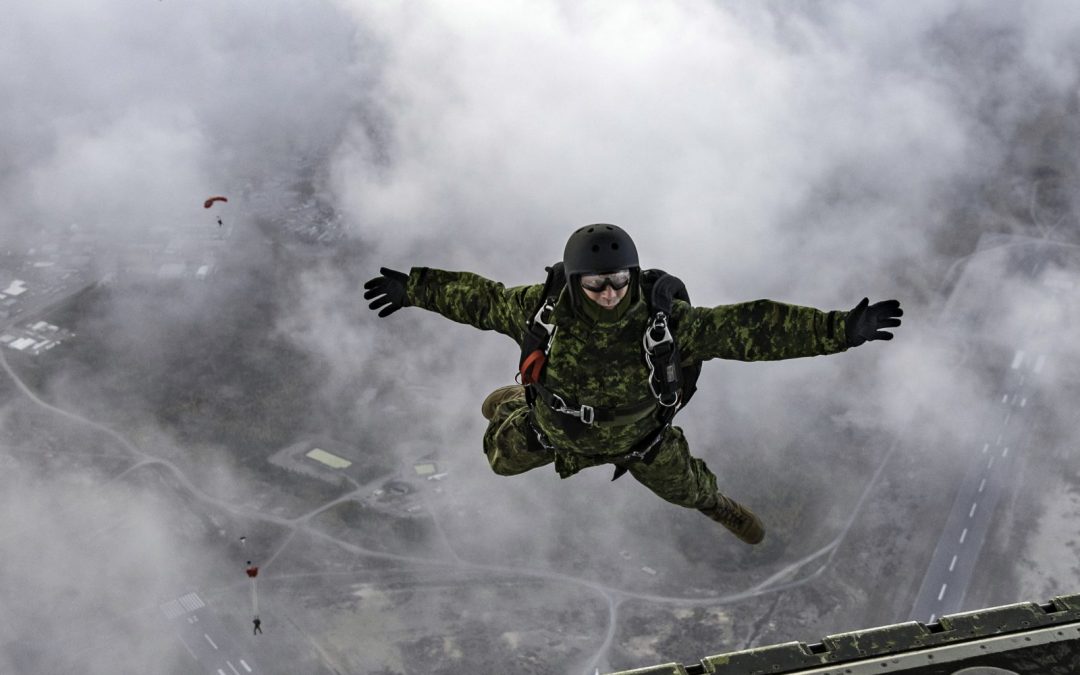 As one, the soldiers rise from the benches, and pointing one hand stiffly, almost theatrically, off to their side and then bringing it up to their chest, hook up the static lines of their parachutes to the overhead wire, then check the ‘chute of the man in front of them.

A bell rings and James bellows, “Go-go-go.” Quickly, the 40 would-be paratroopers begin shuffling forward, their feet booming on the plywood floor of their “Hercules,” a large wooden box with two “doors” cut in each side, through which they exit and drop a dizzying 18 inches or so.

To an outside observer it all seems very fast and impressive; not to James. “They screwed it up,” he says, grimacing. He orders them back into the “plane.”

We are in one of the cavernous halls that make up the Canadian Army Advanced Warfare Centre (CAAWC) at 8 Wing Trenton, Ont. What we – that is, me and Lieutenant Denis Huard-Houle, the centre’s then-adjutant – are watching is the latest group of potential paratroopers going through the basic round parachute course. Mounted four times a year, and often more, this course could be called the centre’s bread-and-butter, dating back to the days when CAAWC was located in Edmonton and known as the Canadian Parachute Centre.

Thanks to the various parachute courses it offers in addition to its basic course – the centre also teaches the use of the square chute and freefall parachuting – it’s easy to think of CAAWC as a jump school. It is true that two of its three companies, the para company and the support company, which consists of the packers who look after, repair and repack the bulk of the Army’s and the search and rescue team’s parachutes, are obviously airborne-oriented. But that isn’t all it is.

CAAWC has other roles and it takes those roles seriously. As much as being a school that teaches individual soldier skills, CAAWC builds capacity through its Advanced Mobility Company, giving the Army the ability to perform in many different environments. “Whatever the Army needs,” said Captain Jean-Philip Gagné, the centre’s current adjutant and public affairs officer.

The centre offers an annual Arctic warfare course, taking about 40 students north to Yellowknife and from there up into the High Arctic. There’s a mountain course as well. “This year is the first year we’ve run this version, which teaches how to respond when there’s an avalanche,” said Gagné.

There’s an annual summer-long pathfinder course, which does feature a parachuting segment, but also sees students heading to either coast to learn how to establish a beach head and work with the Navy. “The submarine can’t come here,” he noted dryly.

And while Canada may not have jungles, “We have a Brazilian exchange officer who’s working to get us into jungle warfare. Right now, he is writing our doctrine for that,” said Gagné.

So today, they’ve been knocked back a bit – and now, once again, they’re rehearsing how to leave the aircraft, how to untangle themselves, and how to land properly, all under the eyes of James and his fellow instructors, dressed in maroon berets, CADPAT pants and “Airborne” sweatshirts.

The repeated drilling all seems a bit mind-numbing, but James explains: “We want our candidates to be reactive.” That is, they hear a command, a bell goes, or they get in trouble in the air, and they know what to do, pretty much without thinking about it.

Others have more personal motivations. One is jumping to help him conquer a fear of heights. Another had a great-grandfather who jumped at Normandy in 1944.

Tomorrow they’ll be jumping for real for the first time. 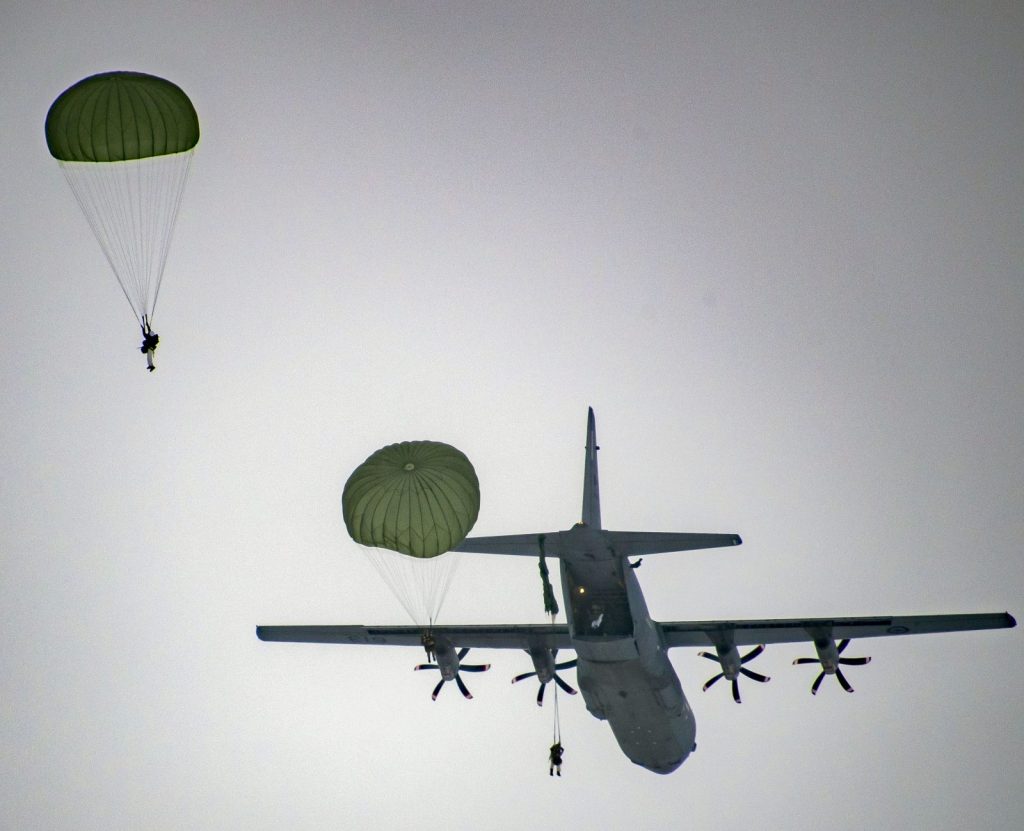 Not too far away, in an equally cavernous hall, another group of soldiers are learning to use parachutes in a more mundane, but no less practical fashion. They are students on the basic loadmaster course, learning how to pack and rig loads of up to 25,000 pounds for delivery by parachute. Like the basic para course, CCAWC runs four serials of these a year.

The 20 students are a mixture of Army and Air Force. It’s one course, but with different, if complementary, aims. The majority of the Air Force personnel are aviators at the beginning of their careers; those from the Army are corporals with a few years in.

“For the Air Force,” said Sergeant Brian White of the Royal Canadian Air Force and the centre’s subject matter expert for the course, “this is a stepping stone,” a necessary course to take if they ultimately hope to go on to become loadmasters on heavy transport aircraft.

For the Army, it’s really about having a capability. “We need to have people who can pack the ammo, weapons or toboggans we need,” said one soldier as he checked a loaded skid. In addition to their work teaching the three-week long course, White and his colleagues also teach drop zone control and how to work with underslung loads on helicopters – “we teach those in the summer months,” he added.

As I snapped away with my phone, shooting pictures of the students at work, White asked me not to photograph a particularly odd-looking vehicle tucked far into a corner – a fairly unpublicized new piece of kit. One of the other jobs White and his colleagues at CAAWC have is to use their skills to figure out how to rig new equipment like this for airborne operations. 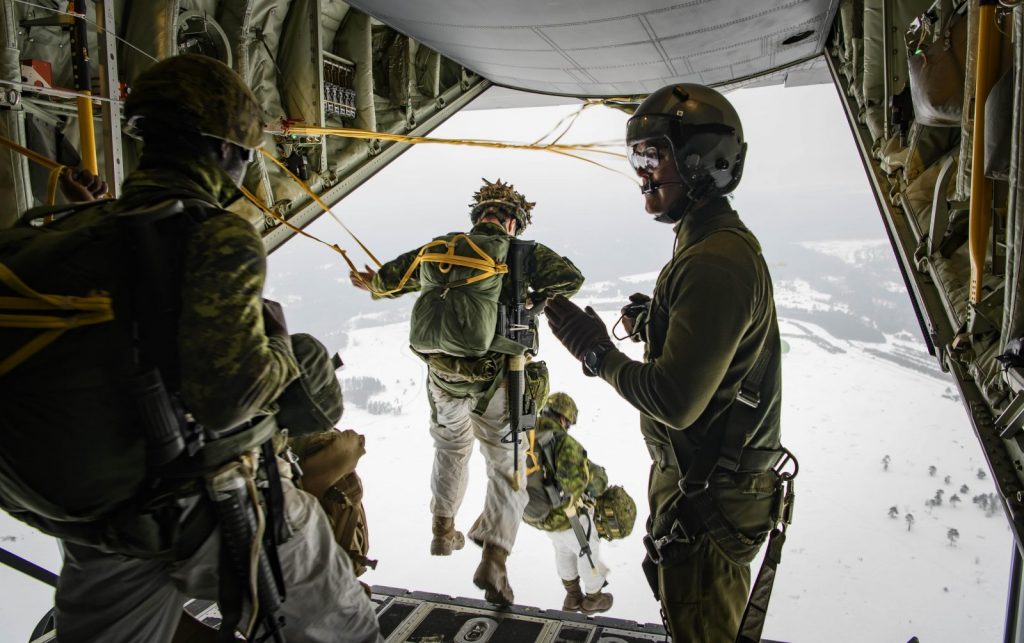 members of the Queens Own Rifles jump during a 2018 exercise over CFB Borden. Photo: Avr Caitlin Paterson

Another spacious hall, dingier and more care-worn than those attached to CAAWC, this time in a higher security area of the base across from the centre and right next to the tarmac where a line of CC-130 Hercules transports, real ones now, are parked. Tuesday is cold and clear, perfect for jumping. Earlier this morning, the trainees made their first jump. They have five to do in all, each slightly more challenging: The first is with chute alone; for the second they will add a 35-pound pack; then a C-7 carbine and a pair of snowshoes as well; finally, a night jump.

In a small room off to one side, five other young soldiers bide their time. If Army parachuting resembles a pyramid, with the trainees at its very base and perhaps the famed Skyhawks at the absolute pinnacle, these five represent a step up or two from that base – qualified parachutists all, they are training to become jumpmasters.

Three are from their regiments’ respective 3rd battalions, one is from the Queen’s Own Rifles of Canada in Toronto, the Primary Reserve unit with an airborne tasking, and the fifth is a rigger from the CAAWC support company. They’ll act as jumpmasters with the trainees, sending them off a few at a time, under the close watch of their own instructors. On the fifth jump, they’ll follow their charges out the door.

Through the open door of the Hercules, Lake Ontario is bright blue and although it is early December, Prince Edward County is still surprisingly green. Thanks to the open door, it’s also unsurprisingly noisy and bracingly cold. It is also, frankly, a little anxiety-inducing to watch the loadmaster and the instructors, who are moving around getting the plane ready for the jump – by pushing down the small platform that the parachutist will jump from with one foot, then kicking each side to make sure it is secure.

As we near the drop zone at Mountainview, the trainees stand and hook up. The atmosphere is calm – this is their second jump after all. And thanks to their training, they have internalized the routines. Their trainee jumpmasters stand beside them. The light goes green, and they are off – five, gone in a few seconds. Then five more and then five more, until the plane empties.

Three more jumps to go. We turn and head for home.