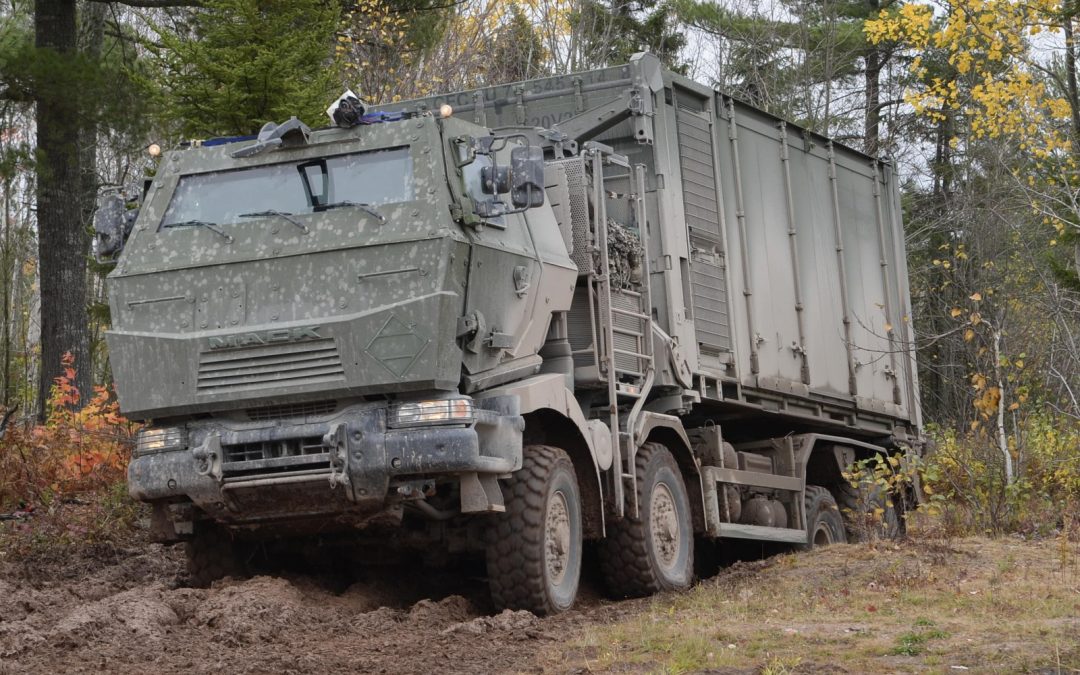 Another fleet of new trucks is on the road to serve with the Canadian Army. The new Standard Military Pattern (SMP) truck is a four axle, 9.5 tonne capacity vehicle, intended mostly for use with the Regular Force.

“Expectations are very high within the Army and I am confident that this vehicle will live up to those expectations,” said Major John Bosso, the project director for the Medium Support Vehicle System (MSVS), of which the SMP is a part.

“This truck will enable significantly faster logistic support because we will be able to move more material more quickly by leveraging the much higher capacity of the truck, as well as enabling greater use of ISO containers to move material throughout the battlefield.”

Led by the diligence of the project management office, four successive iterations of durability testing in the past 15 months have resulted in a more robust truck ready to meet the needs of the Canadian soldier, he said.

“Much of their effort has been tirelessly ruthlessly directed toward ensuring that problems are uncovered before delivery, where the fixes can be implemented vice the alternative; problems that arise after delivery are much harder to address. It is also worth noting that the contractor, Mack Defense, has been a pleasure to work with. They have worked very hard and very openly with National Defence to fully address each issue as it arose.”

The SMP is the third and final component of the Medium Support Vehicle System project, joining the MilCOTS (military commercial off the shelf) truck and purpose-built ISO container-based workshops, referred to as “shelters.” 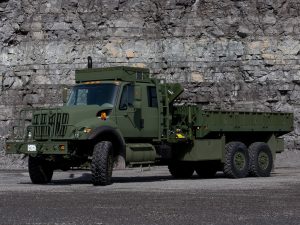 The MilCOTS vehicle, delivered in 2011, was the first platform to arrive. The Army procured 1,300 trucks from Navistar Defense, intended mostly for the Primary Reserve. The vehicle offered significantly enhanced cargo carrying capacity over its predecessor, the Medium Logistics Vehicle Wheeled, but at a vastly reduced per unit cost when compared to the SMP truck. The MilCOTS vehicle is strictly intended for domestic use and will not be deployed.

The second major category of the project, completed in 2016, was approximately 995 ISO container-based workspace. These were configured into 28 unique variants, tailored to the specific needs of various units conducting specific tasks such as repair workshops and field offices.

The Standard Military Pattern vehicle is the final piece of the project. Mack Defense was awarded the MSVS SMP contract in 2015 for 1,500 trucks, 300 trailers and 150 armour protection systems. Delivery is scheduled to begin with a small training fleet this spring and larger quantities over the summer. Delivery of the entire fleet is anticipated by 2020.

One of the major distinctions over the MilCOTS is armour protection for deployed crews. While all trucks in the MSVS SMP fleet will be delivered unarmoured with a standard “soft” cab, the cab can be swapped with a dedicated armoured cab, held at a centralized supply depot, prior to deployment.

“Not only does this save money when compared to armouring the entire fleet, it also saves wear and tear on the vehicles due to the reduced weight during domestic use when the vehicle can operate with the soft cab,” said Bosso.

Almost half the fleet of 1,500 vehicles will come equipped with a highly capable Load Handling System. As Bosso explained, “The impetus for selecting the LHS as such a large proportion of the overall fleet was because, within the past few years, the MSVS project also replaced all of the workshop/workspace shelters that were formerly fitted to other vehicles. These new shelters are now ISO container-based, which the LHS can load, unload and move quickly and easily.”

While the fleet is primarily destined for the Regular force, small quantities will be distributed to Army Reserve Service Battalions, Combat Engineering Regiments, and Field Ambulances to address specific needs. The Load Handling System variant, for example, is necessary to move the newly acquired MSVS Specially Equipped Vehicle (SEV) workshops/workspaces that are based on a 20-foot ISO container.

With a new vehicle comes a jump in technology, and the SMP truck is no exception. “[It] is a modern vehicle, which means it has a modern electronic Controller Area Network Bus. It is a robust and effective system to ensure the optimal operation of the powertrain during all climatic conditions and terrain altitudes,” Bosso said.

Like every branch of the Canadian government, the Army is under pressure to be ‘clean and green’. Because the MSVS SMP is a heavily militarized version of the civilian Renault Kerax truck, the engine is manufactured to strict emissions control standards.

Autonomous driving has become a headline topic in the civilian world to steer drivers out of harm’s way. Bosso said the capability was certainly a consideration, but the technology is not yet ready for the Army.

“The acquisition has been under way for many years while the technology to enable even very limited autonomous behaviours is only now coming to fruition within industry,” he noted. “Further, technology to support the requirement for autonomous military truck operation remains several years away. This is because military vehicles need to be able to traverse terrain beyond legal roadways which have predictable size, painted markings, and signage. In addition to unpredictable and challenging terrain, military vehicles also need to be able to react to hostile enemy action. As such, there is no scope for deploying such technology today as part of the MSVS SMP.”

Troop Carrying Cargo vehicle (TCV)
The TCV is the basic version of the MSVS SMP and comprises 38 percent of the total SMP fleet. It has a cargo deck, sideboards, tailgate, foldable troop seats, superstructure, and tarpaulin. It can carry up to 24 soldiers or it can be used as a general-purpose cargo vehicle.

Load Handling System vehicle (LHS)
The LHS, 47 percent of the SMP fleet, is designed to load, transport, and offload 20-foot ISO containers up to the load carrying limit of 9,500 kg.

Material Handling Crane vehicle (MHC)
This variant, three percent of the fleet, is similar to the cargo variant. It has a crane mounted to the rear of the cargo deck and does not have troop seats, superstructure, or tarpaulin.

Mobile Repair Team vehicle (MRT)
Ten percent of the fleet, this variant is similar to the MHC, except it is designed to carry a 10-foot MSVS Special Equipped Vehicle (SEV) shelter configured as a technician workshop.

Gun Tractor (GT)
Two percent of the fleet, this variant is also similar to the MHC. It is configured with the cabling necessary to attach an artillery computer when the M777 is under tow.