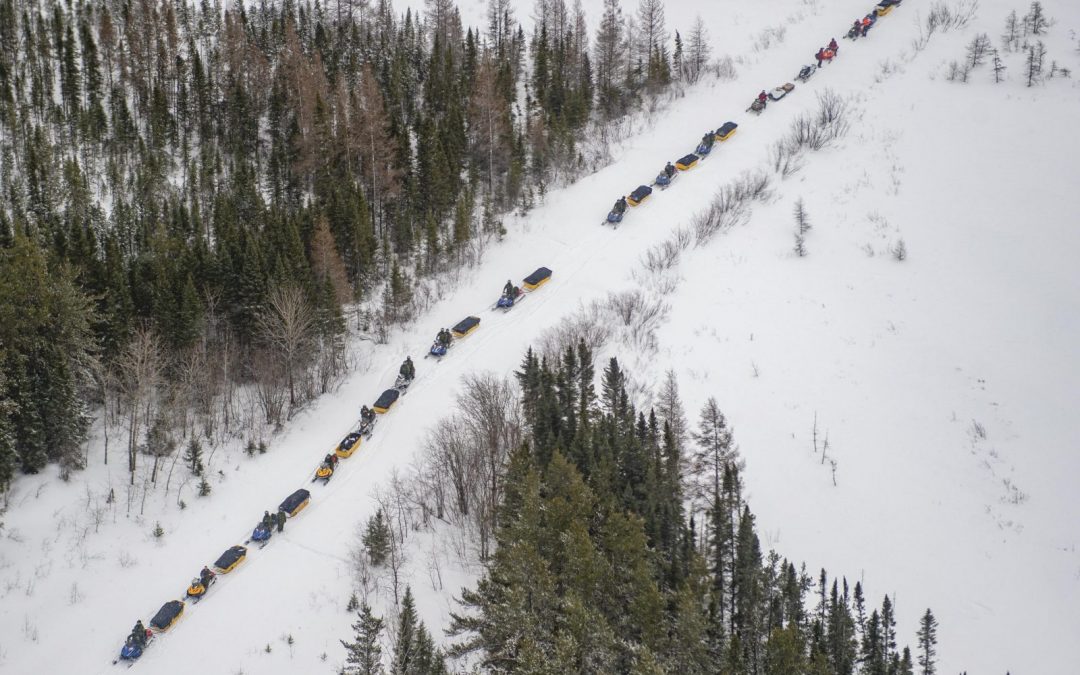 The images are indelible and, in some ways, misleading. Nightly news footage of troops filling sandbags and armoured vehicles wading flooded city streets are well known across Canada. The reality is that smaller communities, and more specifically across the North, also require support in an emergency and the response needs to be specialized and effective regardless of the physical environment.

A much different image was evident from Feb. 28 to Mar. 11, when 200 troops of the 4th Canadian Division’s Arctic Response Company Group (ARCG) deployed in Northwest Ontario for NOREX 2020. Run by 4th Canadian Division, this year’s event was held in the Municipality of Greenstone, approximately 300 kilometres northeast of Thunder Bay.

The Arctic Response Company Group is a specialized sub-unit of the division that maintains an ability to command, move, and communicate under harsh weather conditions in remote locations. The ARCG is the mission task of the Grey and Simcoe Foresters, of Barrie and Owen Sound, and is reinforced with soldiers drawn from across 31 Canadian Brigade Group, based in London, which has units all across Southwestern Ontario.

“The main efforts of the Army Reserve are mission tasks where each unit is given specific tasks designed to integrate with the Regular Army and provide new and ongoing capabilities,” said Brigadier-General Nick Stanton, Director General of the Army Reserve. “The ARCG provides a unique capability for operations in the North in that they can follow on the Immediate Reaction Units with the ability to live and work in the winter.”

The troops staged at CFB Borden and deployed to Exercise NOREX in a 1,110-kilometre road move to Geraldton that began on Feb. 28.

“We try not to call it an exercise,” said Lieutenant-Colonel David Mehaan, exercise director and commanding officer of the Grey and Simcoe Foresters. “NOREX is primarily to validate our ability to operate in this environment. The things we measure are our ability to move, our ability to survive and our ability to resupply and sustain our soldiers in the field.” 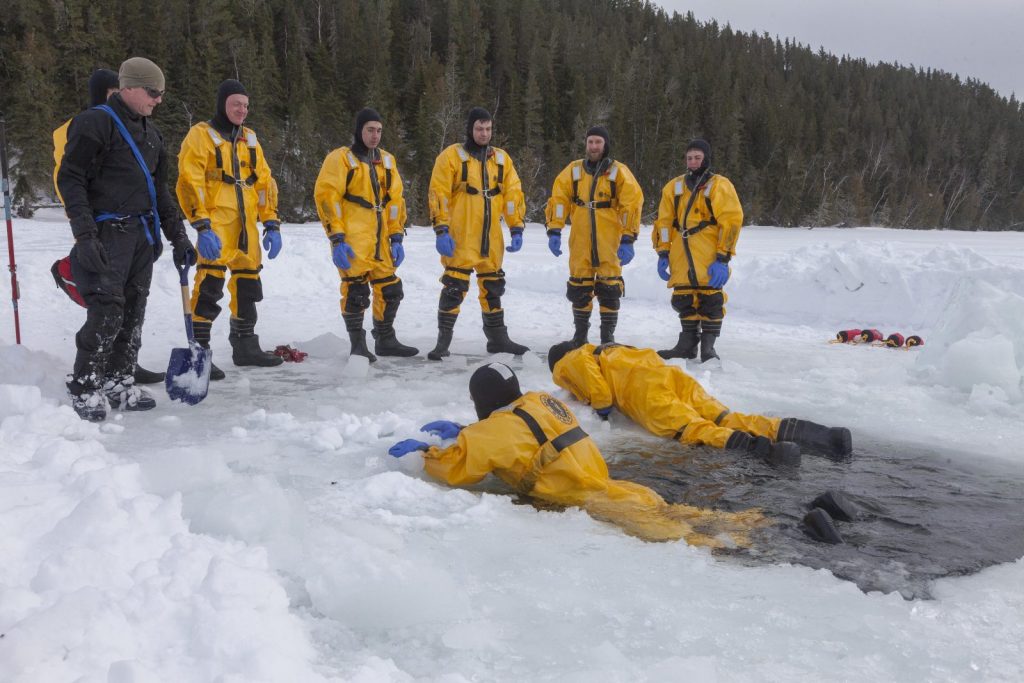 The Canadian Ranger patrols under the command of 3rd Canadian Ranger Patrol Group (3 CRPG) in Northern Ontario are responsible for an area almost as large as the combined landmass of France and Germany. Like Canadian Rangers across Canada, their operations support local communities and reinforce Canadian sovereignty. Working hand-in-glove with members of 3CRPG, the 4th Division troops lived and traveled in the winter landscape, simulating the kinds of movement required to support the Rangers and their assignments. Increasingly, the emphasis is on humanitarian assistance and disaster relief for the area’s communities in a crisis and NOREX focused on that task.

Operating under deployed company command, the ARCG’s three platoons rotated assignments over the active days of NOREX. The company command post was located at Camp Loon at Springwater Lake. Each platoon spent two nights in this isolated location. They practiced winter camp skills, winter survival training and organized a casualty air evacuation. Co-located with a Ranger patrol, the platoon in this location underwent in-depth training on the realities of cold-water immersion. Wearing insulated suits, each soldier went into an opening cut in the deep ice on Springwater Lake where they practiced techniques for self-rescue and for rope rescue of other personnel.

A second platoon traveled overland 120 kilometres to set up a camp in Beardmore. The assignment practised winter movement by LOSV (snowmobiles) and winter camp setup and living. A secondary purpose was to engage local leadership and citizen groups to enhance emergency preparedness and foster the lines of communication required to respond to crises in this and more isolated communities. Displays were staged for local youth and the troops visited community groups.

A third platoon assignment was arguably the most arduous. In turn, each platoon traveled 275 kilometres north on ice roads, lakes and trails to reach the isolated community of Ogoki Post in the Marten Falls First Nation. With no all-season roads into the community, it is typical of many across northern Canada. The troops set up a platoon camp and engaged with the local elected chief and council and with members of the community. The accompanying Rangers from the 3rd Canadian Ranger Patrol Group contributed their local expertise to support the platoon’s effort to reinforce partnerships. This mission required air logistical support and each platoon prepared for and received fuel delivery by helicopter.

While previous iterations of NOREX saw the ARCG deploy into the High Arctic, this was decidedly different.

“What’s unique about this year is that for the first time in a few years we are exercising our ability to deploy into a sub-Arctic rather than Arctic conditions, which comes with its own nuances and challenges,” said Captain Nicholas Roadhouse, commanding officer of the ARCG and second-in-command of Bravo Company in the Royal Hamilton Light Infantry.

“Mobility is different in that here we tow smaller toboggans with our LOSVs and the snow tends to be deeper and softer. We have to balance the need to keep loads light with ensuring we carry enough supplies to complete our assignment.”

Despite the change in location, NOREX proved to be a valuable and successful event. Throughout it, soldiers demonstrated Arctic survival and winter warfare skills in a harsh climate, including the maintenance and operation of snow vehicles and communications gear, operated survival equipment, and conducted patrols in austere environments and within local communities.

“There is nothing better than looking after Canadians at home and, from my experience, having local soldiers able to help augment local manpower is extremely valuable,” said Stanton. He spent two days in the field on NOREX 20 and he sees exercises and domestic operations as win-win opportunities.

“Domestic operations and exercises have the important benefit to the Army that they provide invaluable experience in the command and control required to mass people and focus them on a task.” 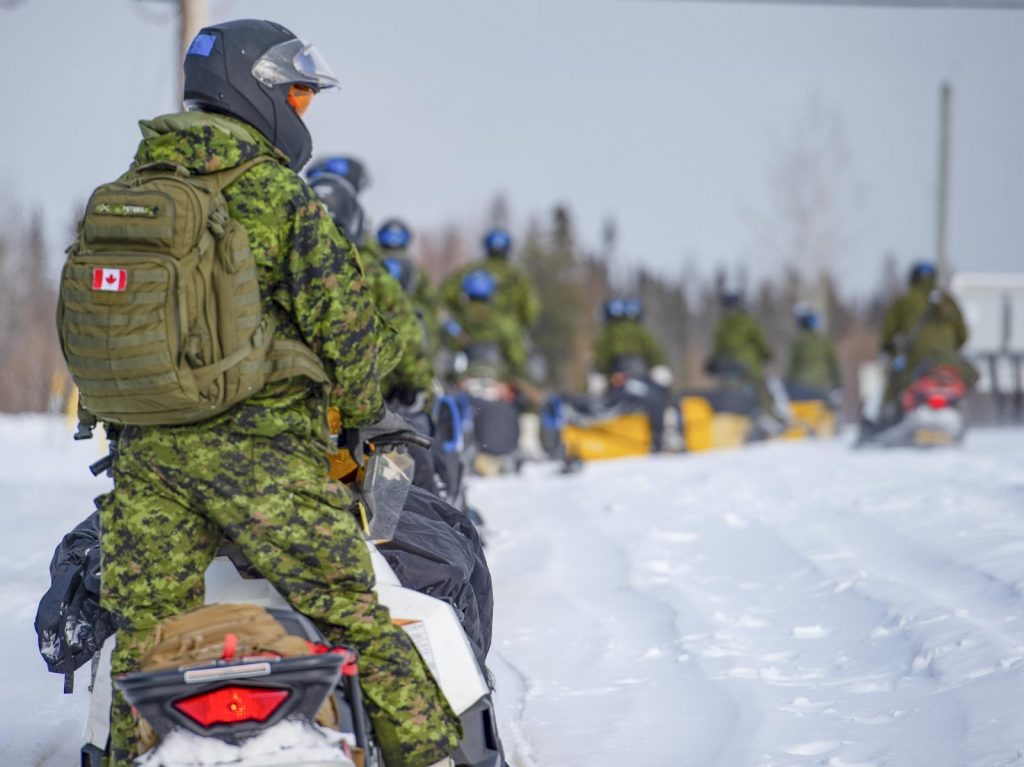 The platoon on the winter route to Marten Falls. Photo: Bdr Julia Curry

As the requirement for aid to civil powers in Canada has grown in recent years, tasks and capabilities of the Army have evolved to meet the needs and the Arctic Response Company Groups’ mandate is a perfect example. First called for in 2008 following the adoption of the Canada First Defence Strategy, the concept was evaluated in several small exercises. Then in 2013, the Master Implementation Directive (MID) for the ARCG was issued, formally tasking the Reserve Force with the creation of the ARCGs.

Each division subsequently stood up an Arctic Response Company Group, which consists of a conventional company, but with attachments from outside the company or its parent unit. Depending on the task assigned, they include medical, engineers, artillery forward observers, intelligence and influence activity.