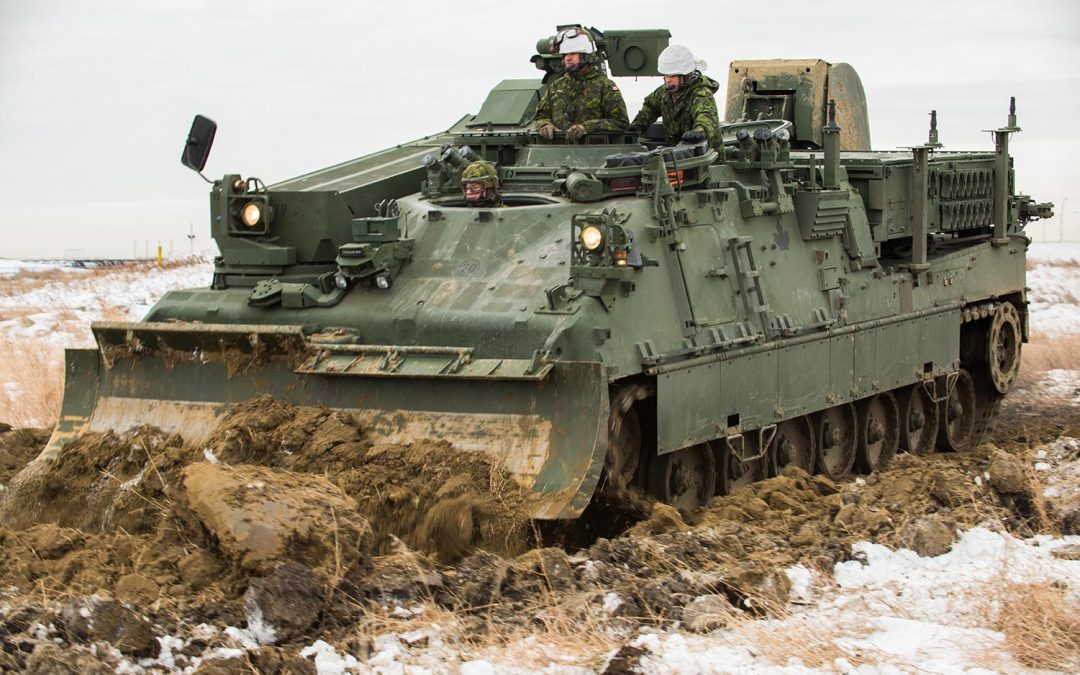 The delivery of these vehicles also helps support the long-term investment in the Canadian Army that is outlined in Strong, Secure, Engaged: Canada’s Defence Policy to enhance capabilities and capacities in heavy engineering equipment for use in operations and at home, including in the North.

The Leo 2 AEV is a modern, heavily protected and mobile vehicle complete with a range of engineering tools. It is used in overseas operations for general debris clearing, mine-clearing, excavating and rescue operations and can be used at home for domestic disaster relief efforts for events such as floods or fires.

This versatile vehicle carries three personnel, can hit road speeds of about 60 km/hr, has additional add-on armour and its combat-ready weight is 69,500 kg. It is also capable of being used in Arctic conditions.

The Leo 2 AEV replaces the CA’s aging Leopard 1-based Badger AEV. It is a product of Germany’s Flensburger Fahrzeugbau Gesellschaft (FFG) mbH, which has a subsidiary in Bathurst, New Brunswick where most of the work on the Leo 2 AEV project is being conducted. 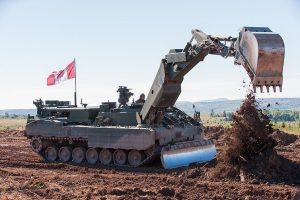 Improvements to the Leo 2 AEV include better armour to protect operators under fire on the battlefield, a remote weapons system, with a C6 7.62-mm medium machine gun and a 76-mm multi barrel grenade dispenser. It also has upgraded welding and cutting equipment, a mine breaching system and the so-called “jaws of life,” a type of hydraulic tool used in emergency rescues to extract trapped victims from severely damaged vehicles. The main winch has a 40,000-kg pull, and the auxiliary winch has a 3,500-kg pull.

It is equipped with a variety of imaging equipment, including thermal-imaging cameras, which allows it to be used during the day, at night and in bad visibility conditions.

All this is in addition to existing capabilities, including a bulldozer blade used to clear rubble and level surfaces, an excavator bucket to move hundreds of cubic metres of earth and debris per hour, an excavator arm with interchangeable attachments used to lift large objects upwards of 4,000 kg, and a capstan winch (a rotary hydraulic device for pulling or hoisting) capable of handling huge loads.

AEVs are also used to fill in craters and perform limited road maintenance and construction jobs. The Leo 2 AEVs, which are expected to support the Leopard 2 main battle tanks until 2035, will further enhance the CA’s mobility and deployability in an ever-widening range of future missions.

“It is the natural evolution,” said AEV Project Director, Major Richard Toppa. “We’ve basically kept the same capabilities but we’ve upgraded. The dozing rate is far greater than that of the old Badger and the digging rate with the excavator is also far greater. As technology and vehicle horsepower change, we increase our capabilities.”

Members of Edmonton-based 1 Combat Engineer Regiment (1 CER) received the first six AEVs and completed initial training (ICT) late in 2017, giving the CA a foundation of fully-qualified soldiers capable of operating and maintaining the new fleet, and training others to do so.

“The Leo 2 has a specifically-geared transmission and set of final drives that really help us get in there and push the dirt,” said Master Corporal Bobby Talaber, a Leo 2 Crew Commander. “We have some pretty tough conditions here with the frozen ground, but the machine is still able to power through.”

Although the Leo 2 and its predecessor have many similarities, training to work on the new AEV involves becoming familiar with all of the components, hydraulic and electrical systems and schematics as well as its new features.

“It’s definitely a big step up,” MCpl Talaber noted. “There’s definitely a whole host of tools we have at our disposal and it’s exciting to get out here and use them.”