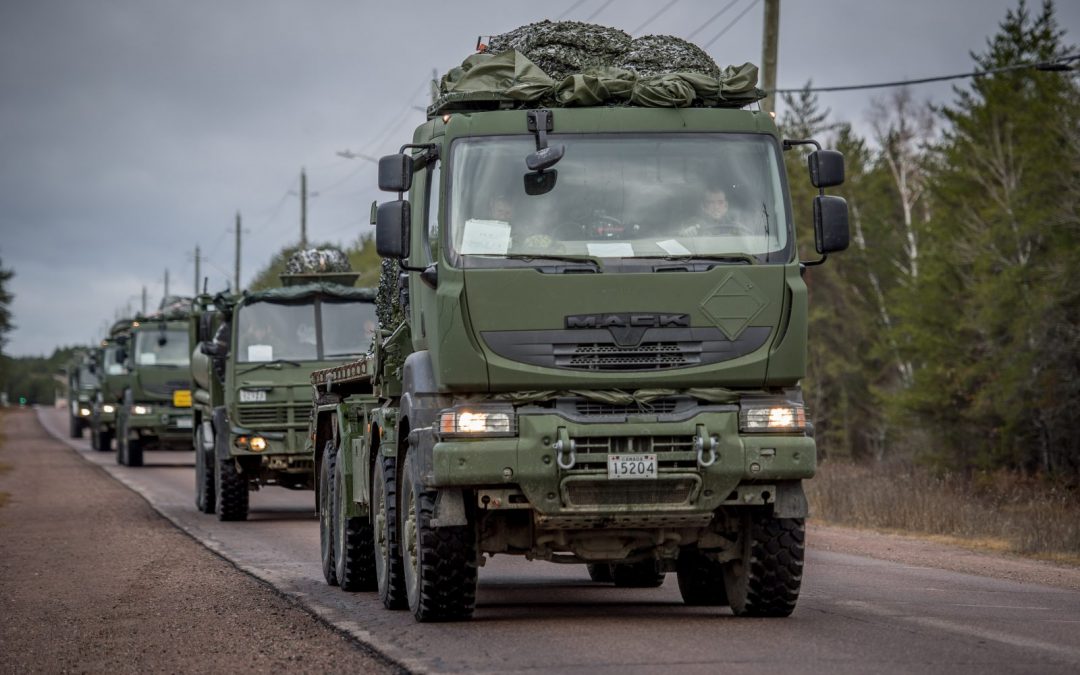 The Medium Support Vehicle System (MSVS) Standard Military Pattern (SMP) truck has marked a key milestone on its road into service with the first overseas deployment.

Despite the damp conditions of the Latvian winter, the trucks have started and performed well, said Private Shayne Jean-Boliver, a mobile support equipment operator.

“We have used the MSVS-SMP in combat service support rehearsals and on our day-to-day taskings,” she said. “A typical day for these vehicles can include anything from moving ammunition to soldiers. The cargo variant is used typically for water and rations, ammunition, gun towing and soldier movements. The load handling system is also used for ammo movement; it’s possible to place a (sea container) on the flatbed and use that for ammunition transport. Our medical personnel deploy their UMS via the flatbed on the back of the MSVS-SMP.”

While the MSVS-SMP portable shelters have been used on various Canadian Armed Forces (CAF) missions and the trucks were part of the Army response to extensive flooding last spring in Ontario, Quebec, and New Brunswick, their role in the battle group is a first test for their armoured capability.

Before the 16 vehicles were shipped, teams in Montreal swapped out the regular cab for an armoured one – a 48 to 72-hour job – and installed run-flat tires to better manage punctures. The Army also reprioritized the production schedule with Mack to ensure minor delays with cabling installation were adjusted so that communication systems were ready for operations.

That is a significant improvement over previous logistic trucks, few of which had radios. The MSVS-SMP has a comms suite and the ability to connect two radios and a built-in GPS antenna, said Lieutenant-Colonel Marc Berube, the integrated logistics support manager for the project.

Maintenance technicians are trained to work across platforms, so although the MSVS-SMP is a generational leap technologically from the 1980s era Medium Logistics Vehicle Wheeled (MLVW) it is replacing, the first overseas deployment has not been a steep learning curve for maintainers. Nonetheless, the Army sent a field support representative from Mack Defense to provide technical assistance for the first six months. “So far, no big issues,” said Berube. “A couple of small issues, but no different than what we would be facing in Canada. It is a great machine.”

“It’s been here long enough that any issues have been ironed out, and I’ve never had an issue using this particular platform,” added Jean-Boliver.

Since the battle group from 1 Canadian Mechanized Brigade Group began its six-month rotation in January, the MSVS-SMP has been used on a number of multinational exercises, including Steele Reforger, Fires Prime and Steele Quench. 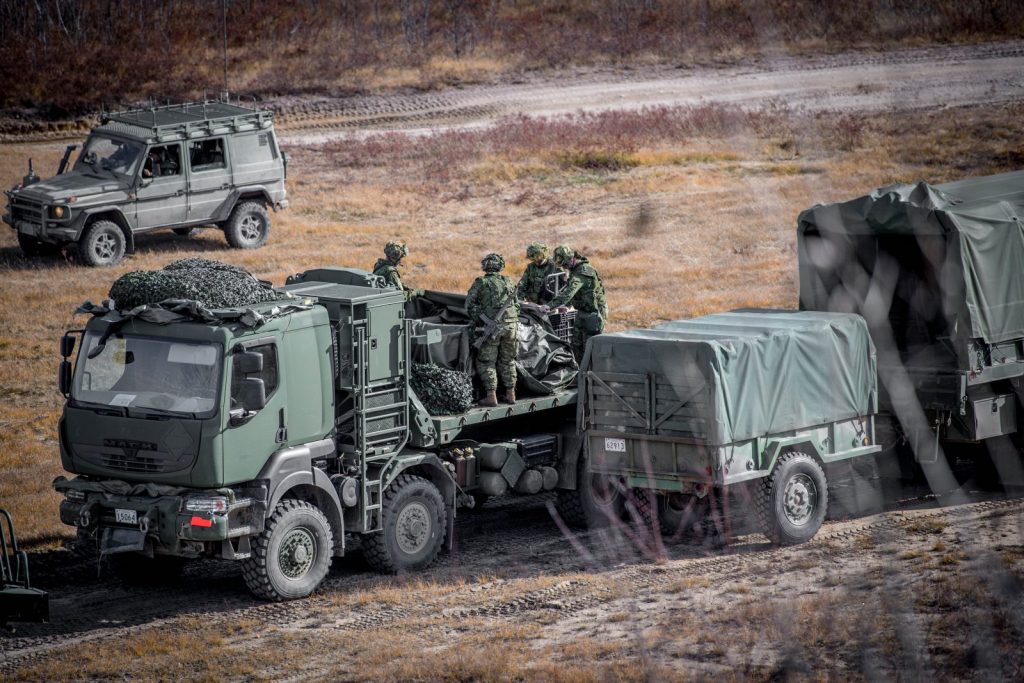 VERSATILE PLATFORM
The deployment to Latvia came as the last of 1,587 MSVS-SMP trucks rolled off the final assembly line at Prevost in Saint Nicolas, Que.

Mack Defense, a subsidiary of Mack Trucks, part of the Volvo Group, was awarded two contracts in 2015 valued at $834 million for 1,500 Standard Military Pattern trucks and trailers, armour protection systems and in-service support. Canada then exercised options to increase the quantity to 1,587, raising the total value to over $880 million.

The SMP is the final component of a larger Medium Support Vehicle System project that included 1,300 MilCOTS (military commercial off-the-shelf) trucks from Navistar Defense, delivered in 2011 and intended primarily for the Reserve Force, and 995 purpose-built ISO container-based workshops, or shelters, in 28 configurations for various CAF unit tasks.

Five variants of the 8×8 SMP, itself a variant of the Renault Kerax truck, have entered service over the past year: A basic troop and cargo carrying vehicle (TCV), a load handling system (LHS), a material handling crane (MHC), a mobile repair team vehicle (MRT), and a gun tractor (GT) with cabling connecting the artillery computer when the M777 is under tow. The LHS and TCV make up about 87 percent of the trucks.

The MSVS-SMP, which has a 9.5 tonne payload, is considered a “gateway” vehicle for the Army, introducing new electronic systems and technology that will feature prominently in future logistic vehicle programs currently in the procurement pipeline, including the Logistics Vehicle Modernization project that will replace the Light Support and Heavy Logistics Vehicle Wheeled fleets (LSVW and HLVW) with three tonne and 16-plus tonne trucks and trailers.

“The success of our operations is dependent on logistics,” Brigadier-General Gervais Carpentier, commander of the 2nd Canadian Division, told dignitaries, military officials and Mack Defense and Prevost employees at a celebration on Feb. 13 to mark the final assembly. “The (MSVS-SMP) gives us the flexibility to conduct … any type of operation, regardless of the conditions.”

“It is a multi-functional platform and very versatile,” he added in an interview. “You have an ability to bring (specialized) containers to a location, offload them, and leave with the vehicle to get other equipment. Previously, we did not have that much flexibility.” The Division has accepted about 450 vehicles for various units.

The MSVS is considerably larger than the MLVW, with a cab that offers a better view of the road and a smoother ride. “It is quite a dynamic beast,” said Major Sepp Rodgers, the project director with the Directorate of Land Requirements. “This is a different way of doing things. It has a pneumatic system for adjusting your air brake, it has a central tire inflation system for adjusting your tires for different terrain, it’s got a more efficient engine, it’s got air conditioning.

“And there are spare parts available for this vehicle,” he added with a wry smile, a reference to challenges with the 35-year-old MLVW.

The new systems have required some re-training for maintenance technicians. An initial cadre completed course work with Mack Defense as the first vehicles rolled off the assembly line, and have been training maintainers across the Army since. Maintenance includes working with a lap-top based diagnostic tool to pinpoint problems and an interactive electronic technical manual to demonstrate repair procedures.

“That is fairly new to the Army,” said Berube, whose team validated all of the operator and technical manuals. “It is a huge jump from the previous truck, but in the context of the rest of the Army, it’s not a big jump because the same technicians who fix this also work on the TAPV and LAV 6.”

“Some of this is brand-new technology, so it’s a great opportunity to work with something new,” added Rodgers. “And new trucks we intend to purchase will most likely have similar systems, so this is a gateway truck in many ways.” 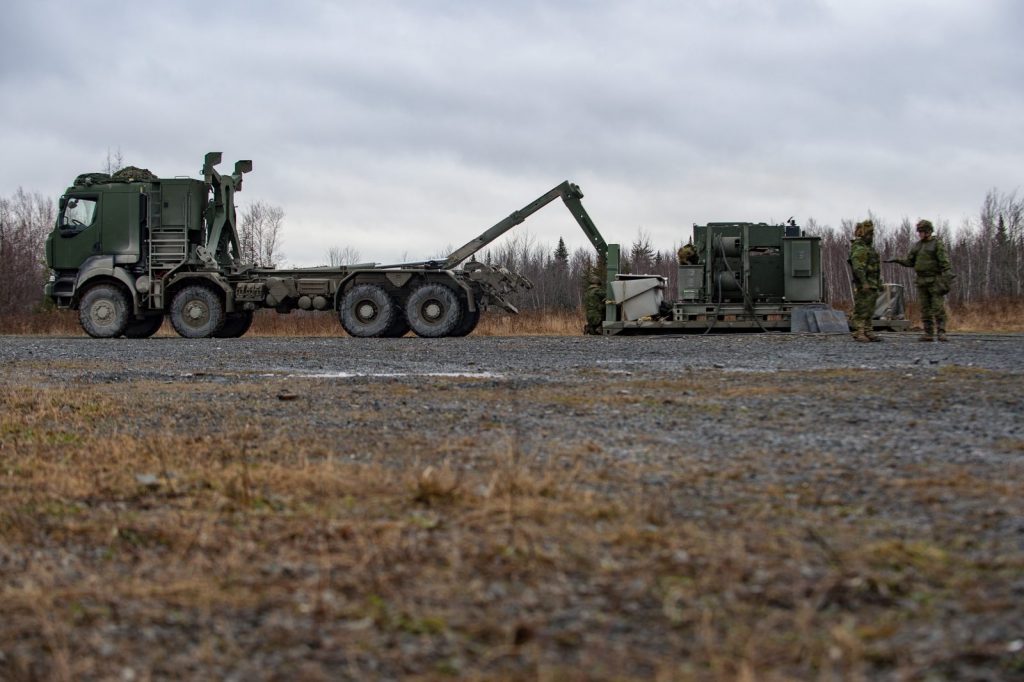 A FIRST MILITARY WIN
The MSVS-SMP project has travelled an uneven road since the need to replace the MLVW trucks was first identified in October 2000. Project approval didn’t come until February 2006, and bids were not submitted until 2014. But in the years since a contract was awarded in July 2015, the pace has been anything but pedestrian.

The start-of-work meeting with the Department of National Defence and Public Services and Procurement Canada occurred 30 days after the award, an intense four weeks in which Mack Defense scrambled to pull together all necessary material, said David Hartzell, president and CEO.

“MSVS has been a long, demanding and complex project,” he acknowledged.

But early efforts to develop an integrated Army, procurement and industry team during the design phase paid off as the project shifted into high gear, said Diogo Brandao, project manager for the Assistant Deputy Minister Materiel Group.

“There was definitely time taken early on to work through some of the design, quality and testing, which led to some changes and improvements so that we were delivering the best possible product. Doing all of that work and testing prior to delivery of the first vehicle paid dividends. Once we got into production, we quickly hit steady state. It’s a complex project and you always work through some issues, but getting that visibility and working through them early made the last two years all that more smooth and efficient.”

In fact, as of February 2019, just 200 trucks had been completed under initial low rate production. The remaining 1,300 were delivered within 12 months, at a rate of about 30 per week that also had to factor in a two-week boat ride from France to Prevost’s final assembly plant south of Quebec City.

That required the full cooperation and attention of the Volvo organization, which included multiple production facilities in France, as well as Mack and Prevost, both Volvo subsidiaries. It also needed the full support of Canadian partners, from Dumur Industries for armoured cabs, EODC for armoured kits, Craig Manufacturing for the cargo beds, and Link Suspensions for the LHS trailers, as well as GT Machining & Fabricating, Fellfab, Marshall Aerospace, Steelcraft, Valcom and Pro Metal.

“This program demonstrates the global reach and collaboration Mack Defense is capable of,” said Hartzell.

Mack Defense, headquartered in Allentown, Pennsylvania, was formed in 2012 to pursue military contracts such as MSVS-SMP. The project was the company’s first military victory and a door-opener with the U.S. Army. Hartzell said the experience gained developing the technical response and proposal helped secure a win for the Mack Granite M917 A3 heavy dump trucks in 2018. “Mack Defense will be forever grateful to Canada for being awarded the MSVS contract.”

The company is now pursuing the Common Heavy Equipment Replacement project, which has a requirement for earth moving machinery, and the Logistics Vehicle Modernization project. “We are tracking that very closely,” he said.