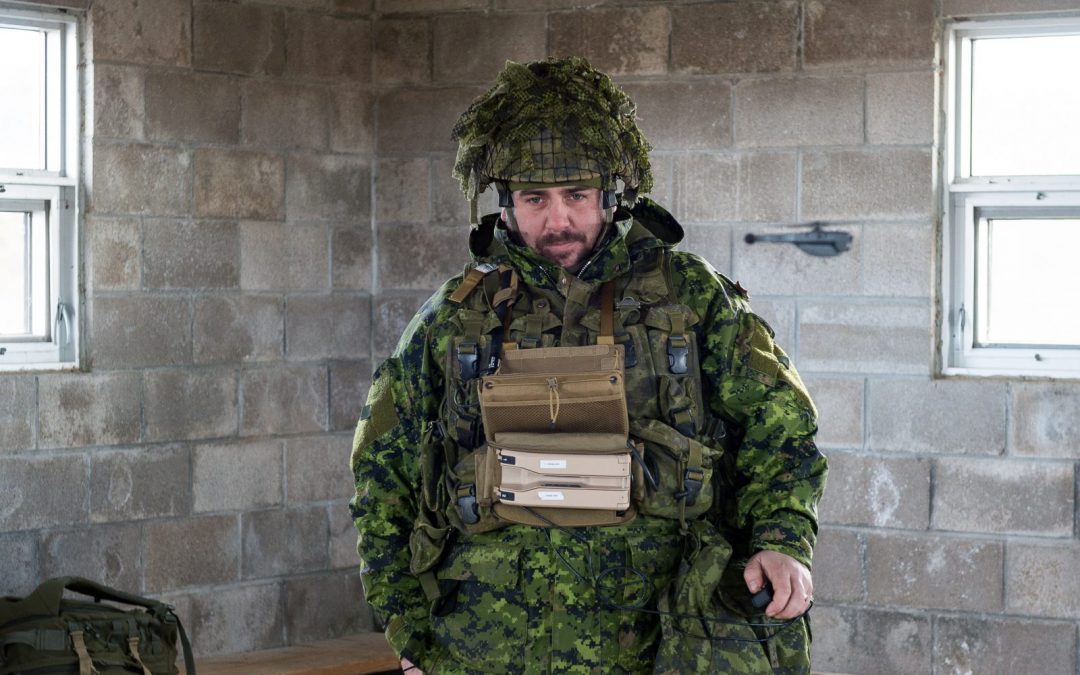 When the 1st Battalion, Royal Canadian Regiment (1 RCR) assumed command of the enhanced Forward Presence Battle Group in Latvia in July 2018, they deployed with their own aerial reconnaissance platform.

Weighing little more than 50 grams, the Black Hornet handheld micro unmanned aerial system (UAS) provides a lightweight, portable beyond-line-of-sight capability to small units gathering intelligence on what’s over the next rise or inside a building. For 1 RCR, it was a first test of the utility of the FLIR Systems miniature device in operations.

Improving situational awareness for soldiers in dispersed operations is paramount, and the day and night vision of a micro aircraft is one option currently being explored by the Canadian Army.

Last October, the Army’s Trials and Evaluation Unit (CATEU), part of the Combat Training Centre at 5th Canadian Division Support Group Base Gagetown, began conducting trials of a Black Hornet 3 in a range of scenarios in both open and urban terrain.

From reconnaissance to building inspection, the Hornet was pushed to the limits of its ability to help detect and identify targets of interest while remaining inconspicuous. The trials, which involved artillery, armoured reconnaissance, and infantry operators and observers, included multiple tests of its maximum range to see at what point it lost signal and how it responded; its ability to operate in sustained winds; its maximum detection, recognition and identification of camouflaged soldiers and vehicles along routes and pathways; its utility and endurance in urban environments moving in and out of buildings; and its role in point and route reconnaissance, explained Captain David Kapa, the trial officer and now the trials coordinator for CATEU.

“They certainly pushed the envelope of the capability,” said Lieutenant-Colonel Ray Corby, who oversees the Integrated Soldier System Suite (ISSS) project for the Directorate of Land Requirements. “We know with a small aircraft that the weather, the environment, all of that is going to be a factor and may limit its effectiveness. They also looked at the limits to detectability and identification, at what point you can pick up something using the optics. That will help us define our requirements.”

The Army’s unmanned aircraft expertise has traditionally been the purview of the 4th Artillery Regiment (General Support) and the Royal Regiment of Canadian Artillery School. But the micro system represents a sensor capability that may fit better with the ISSS currently being fielded with various units.

“That is the real promise, integrating that type of platform with the ISSS so that soldiers can build better situational awareness,” said Corby. “Our vision is to find something that the soldiers can use in a very local environment, one kilometre and closer, that is controlled by them and they don’t have to compete with any other forces on the ground for priority use. It is very much a personal tool to better understand where they are operating.” 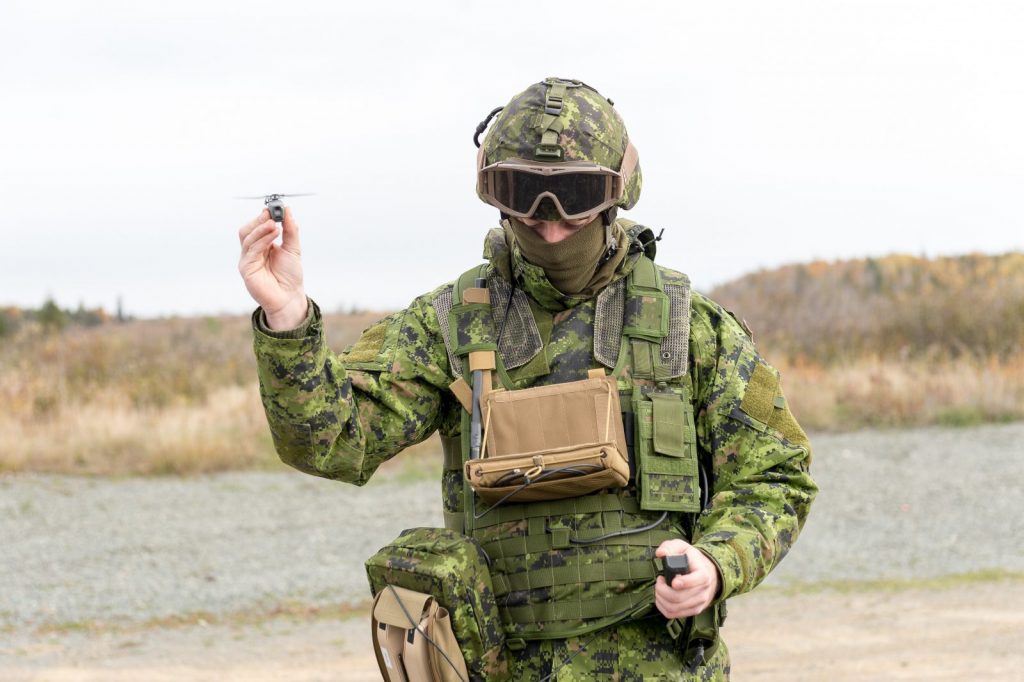 Three Black Hornet systems were acquired in 2018 as part of a buy-and-try program primarily to evaluate their fit in Army operations rather than fill a capability gap. But Corby noted the UAS “does meet an area where we don’t have a capability—at the soldier level.” Larger unmanned surveillance aircraft like the CU172 Blackjack and CU173 Raven B are generally company- and battalion-controlled assets.

“If I want a platoon of soldiers to take a look at one building that they are conducting a raid on, I want them to have that asset with them, I don’t necessarily want them to wait and have that deconflicted at a higher level,” he said.

Transferring the evaluation to the ISSS project is well-timed. The first cycle of the Rheinmetall Canada-built soldier system consists of a tactical smartphone-like computer with GPS, a radio, and a push-to-talk headphone, connected to a hub that allows the soldier to share navigation, blue force positioning, enemy locations and other situational information across a section, platoon or even company. The suite was trialed last fall by the 3rd Battalion of the Royal Canadian Regiment (3 RCR).

Weight, power consumption, and the overall modularity of the ISSS are still being improved and the Army is determining how best to employ the system—for example, does every soldier in a section need it at all times? But even as the project team strives to resolve those issues, it is exploring additional capabilities that could be integrated to enhance the overall system.

“One of the ways is to build another tool into it, give it a sensor whereby you can see your objective before you launch onto it,” Corby explained. “A reconnaissance platoon might be the primary user within a battalion, because they are responsible for getting other units onto an objective, but it would not be limited to them.”

He added: “Anything outside of a kilometre is going to be a mission for a different platform, but for sending a UAS through an open window to look down a hallway, this is it. If you integrate the video feed into the ISSS, you can then populate a map or an image and send it to the force that is going to conduct the raid.”

The CATEU trials found that while the general consensus was positive, the Black Hornet 3 did have some drawbacks because of its size and the limited optics. Two aircraft crashed in high winds, which at times gusted above 20 kilometres an hour, and it was challenged in some of the urban testing, working with both a GPS signal and in a GPS-denied environment. Although the manufacturer claims a flying time of 25 minutes, flying conditions hampered that.

“Unfortunately, we didn’t achieve that,” said Kapa. “The only time we came close was during one iteration of outdoor endurance testing, where there was no wind or other interference, during which we achieved 24 minutes and 18 seconds of flight time. In general, it was 20 minutes or below, and a lot of that had to do with the fact the system had to fight the wind and that drained the battery.”

Snipers and recce soldiers were quick to see “the benefit of this in the execution of their daily tasks,” he said, and it proved its value as a “situational awareness system that would provide soldiers with data right away,” but some modifications might be required for urban operations and to improve target identification.

Throughout the various trials, operators deliberately ran down the battery to test not only the maximum range, but also how long it could continue to stay aloft and provide usable data. “We found that despite what the specs said, the time one of these Black Hornets could stay up was actually quite limited,” said Kapa. “But because it is utilized at such a low level, for the user on the ground it was just enough time to develop a better understanding of the situation on the ground.”

The second cycle of ISSS will provide section and platoon commanders with a larger tablet (rather than just the smaller cell phone-like display of the current ISSS) that can receive UAS video feeds integrated with the Army’s Land Command Support System (LCSS). For commanders looking to see over the next hill, behind a tree line or inside the window of a multi-story building, the Black Hornet can be unpacked and launched in minutes, can record video or take still images, and offers a low visual and audio signature that make it difficult to detect.

It wouldn’t change a section’s tactics, but it would give leaders a three-dimensional picture of the battlespace without having to expose soldiers, said Corby.

“I want to give commanders a toolbox that they can scale for their mission,” he added of the overall ISSS, which is now defining the requirements for the third and final cycle of the project, including software improvements, smaller and lighter components, and additional tools.

“When we analyzed our options, a micro UAS was the most beneficial to the field force,” he said. “It’s an expensive device, but not so expensive that we wouldn’t be able to give it to every unit that requires it. And there’s an opportunity here with Rheinmetall … to play that integrating role as the contractor on ISSS.”

The project team must still define the requirements for a micro UAS. Feedback from infantry in Latvia and user trials will inform much of that, but Corby said the ISSS project offers a “a small window to make improvements and add capability,” and he intends to capitalize, even if he has to repeatedly temper expectations that the system does not provide long endurance target identification and tracking from above the battlefield.

“I think we have found a comfortable position where every soldier can have it at a high level of encryption or just the key leaders at the secret level. And the same capability that allows us to use this system now in a contested environment will also allow us to eventually link in with LCSS.”