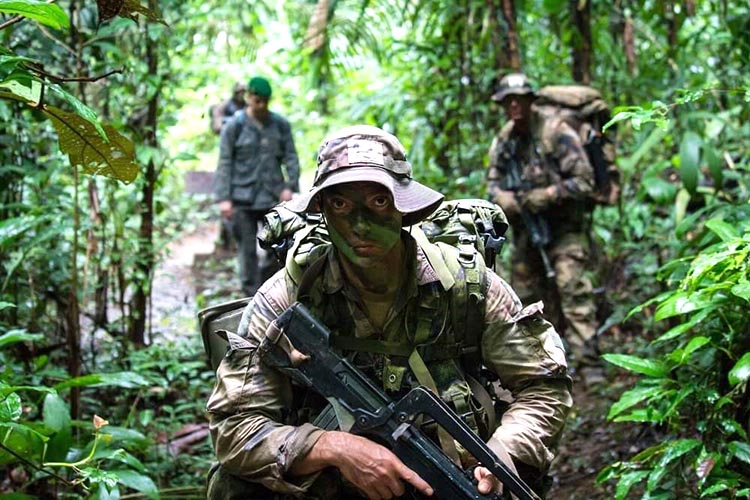 The national mandate of B Company, 3rd Battalion, Royal 22e Régiment (3 R22eR) is to prepare elite combatants to carry out complex missions in the jungle. These missions take place in the heart of inhospitable environments, with crippling humidity levels, high risks of infection and with an omnipresent animal threat lurking in the shadows. Let us turn the spotlight on the rigorous selection process for the jungle warfare course.

About 10 candidates from 3 R22eR, faces tensed with effort, began the first selection tests at 2nd Canadian Division Support Base (2 CDSB) Valcartier, all trying to secure one of the rare open spots on this specialized training. The selection, which took place from August 27 to 29, 2018 was for B Company members of the rank of Master Corporal or higher.

The instructor in charge of selection, Sergeant Philipe Paquin-Bénard, was one of the two first Canadians to successfully complete the Jaguar international course in 2015. This jungle warfare training is organized in French Guiana by the Foreign Legion. This French Army corps is a true source of national pride for our French cousins.

Sgt Paquin-Bénard explained that the series of tests that make up the selection draws direct inspiration from the highest performance standards established by the countries that offer the jungle course, such as the United Kingdom, France and Brazil.

Selection still involves a great number of push-ups, sit-ups, squats, chin-ups and an eight-kilometre run in combat boots that must be completed in under 40 minutes. Candidates are also expected to twice climb a rope suspended from the ceiling. To make things more challenging, the second attempt must be made with a 4.5-kilogram bag attached to the candidate.

On the last day of selection, candidates are brought to the Sports Centre pool where a final test awaits them. They have to swim a distance of 400 metres without stopping in under 15 minutes. To up the ante on this challenge, candidates wear combat boots. Finally, they have to tread water for 10 minutes, while tightly holding on to a combat weapon.

“The pool test is very demanding. Candidates have no other option but to pass” said Sgt Paquin-Bénard.

He noted that Canada does well every year on the course. “Sergeants Gabriel Dugas and Jonathan Lacroix of 3 R22eR did very well. They finished first and second respectively in their class in Brazil in 2016,” he said.

Members from around the world proudly represent their countries on this unique training. Selected candidates from 2 CDSB Valcartier will have the benefit of five weeks of preliminary intensive training, supervised by Quentin Martin, an instructor who trained as a kinesiologist.

Mr. Martin said that the amount and the intensity of training will be progressively increased as the days go by. “The candidates are already very motivated, but nothing should be left to chance. We therefore focus on their shortcomings,” said Mr. Martin, who is already in his third year as leader of the camp. “It will be very difficult because we train them like athletes,” he concluded. 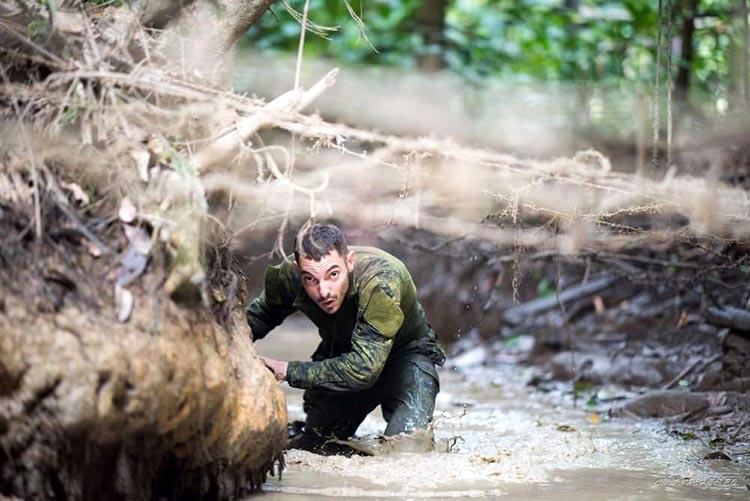 The jungle warfare course encourages candidates to take on adversity and develop strong resilience. Giving up is not an option. Photo: Adsum Newspaper.

This is “commando-style” jungle warfare training. There are three separate phases. The first is battle inoculation, during which candidates learn basic survival manoeuvres, hand-to-hand combat, topography and orienteering. The second phase teaches them various useful techniques such as building a rope bridge and tying various kinds of knots.

The final phase is a tactical phase. Candidates learn how to efficiently lead a section and a platoon in the jungle. During the training, candidates must react to enemy-effective fire, manage a casualty and conduct an air extraction and neutralize threats while moving efficiently through terrain with elevations that can reach up to 380 metres.

“These courses were, for too long, described as unachievable. People feel fully operational upon their return and they acquire knowledge that could serve them in the future,” said Sgt Paquin Bénard.

WELCOME TO THE JUNGLE

Sgt Paquin-Bénard described the challenges of the jungle: “The climate is oppressive and the vegetation is very dense. The ground is muddy and the trees have defence mechanisms like needles and poison. You also have to wash yourself regularly to prevent infection,” he said.

“Insects are everywhere. For example, you cannot sit on the ground because of fire ants. You would literally be ‘eaten’ by bugs if you sat on the ground,” he added.

“There is no access to GPS or radios, and the maps are often imprecise,” he went on to say. “It’s also practically impossible to get from point A to point B without having to cross a river. You also have to watch out for animal threats like the fer-de-lance snake and jaguars.”

“When you work in an equatorial environment, you do so with basic equipment like the good old C7 or C8 with dry sight. You have to study the tides to be able to take certain waterways at the right time. Helicopter extractions require using dynamite on trees and a chainsaw to clear an approach perimeter,” explained the 3 R22eR instructor.

Canadian members in the jungle are always equipped with a machete to clear a path through the lush vegetation. They also carry 23-kilogram rucksacks whose contents are hermitically sealed thanks to waterproof plastic containers.

During 1999-2000, a contingent of 250 soldiers from 3 R22eR participated in a six-month peacekeeping mission in East Timor, a country in Southeast Asia. Although the mission was a success politically, the post-deployment report described various problems that hampered operational effectiveness.

The problems related to a limited knowledge of the jungle and equipment that was unsuitable for that hostile environment. The Army had to take steps to reacquire the necessary knowledge.

Due to the high tempo of subsequent operations, it was only in 2008 that 3 R22eR was finally able to spend the necessary effort to develop “jungle capability.” At that time, a group of 30 infantry soldiers from the reconnaissance platoon took part in an exchange with the Royal Gurkha Rifles, in Brunei on the island of Borneo. Despite the group’s level of battle inoculation and very-high proficiency level, the lack of expertise at the individual level was an obstacle to the training’s success. Individual participation in specialized jungle was thus essential before undertaking collective training.

Therefore, beginning in the fall of 2011, members of 3 R22eR have been deployed to receive jungle warfare training in collaboration with Canada’s Allies. The goal was to create a pool of instructors within the Battalion to eventually develop collective capability.

In 2014, the expertise acquired enabled the development of the necessary structure to meet the jungle mandate, which had been assigned to the unit’s B Company. In order to support jungle warfare training, a permanent training and planning cell was created within B Company. To date, it continues to progress towards its objective of company-level jungle capability and is on the right path to becoming a national reference on this point.

When it comes to building capability among the light infantry, integrating support elements is essential to enabling the troops. For this reason, reconnaissance experts, snipers and members of 5 Field Ambulance also participate in the training.

The ultimate objective is to provide the Canadian Armed Forces with a force capable of inserting itself and operating in a tropical and equatorial zone over a prolonged period and to eliminate the threat, regardless of its location.